Ho boy, I've been lazy with my blog and updates, and I sincerely hope you guys and gals haven't abandoned me, or given up hope on this blog, since there's still so many more projects left to do (and hopefully some big ones coming this year).

This post is going to wrap-up a whole bunch of projects I've talked about this year, but that I haven't posted any photos of yet. These mainly include mundane/uninteresting projects, but I'm still posting them for you (and for my own record keeping).

First, OLD projects. I mentioned making a bit more progress on the "shop hutch" earlier this summer. This included fitting all the doors (old windows), installing the hinges and knobs, and installing some old salvaged crown moulding to the top. I still have the 4 bottom doors to cut and fit (just plain flat doors), and 3-4 drawers to make in the centre opening.

Another project that I never showed is the large (9 foot tall) storage rack/shelving unit that I made (which is standing in the left corner next to the hutch in this photo below). It's hard to tell the scale, but trust me, it's massive. The hutch is 97" tall (a hair taller than your average 8 foot tall ceiling), and the shelving unit is a foot taller than this. 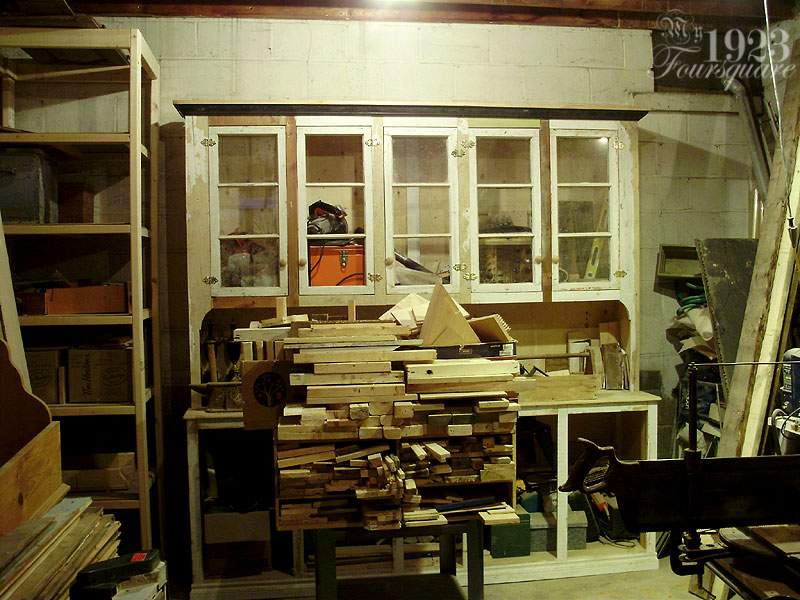 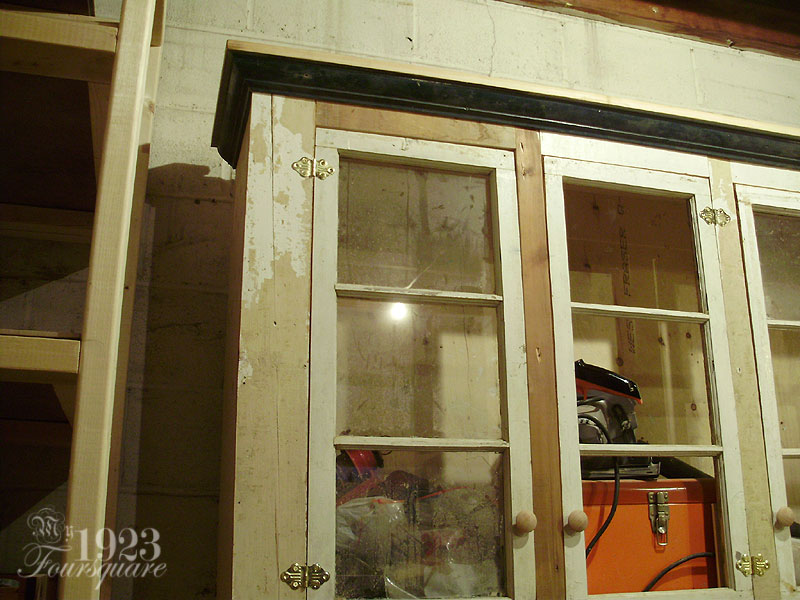 Again, this entire hutch is just crudely built, and was made entirely out of SCRAP wood, and junk parts (other than the hardware). The crown moulding was free. 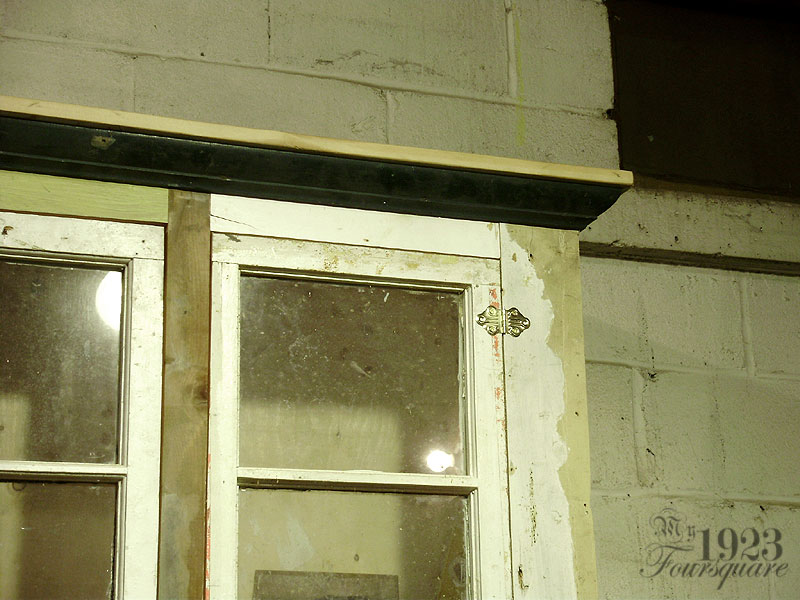 Next I'll show the work that was done in the back staircase. This "room" is hard to photograph, and there's also some junk in there currently (old doors, and a bicycle) so the photos are likewise awkwardly taken.

Basically, if you can remember YEARS ago before I gutted this room, the ceiling was horribly sloped (see photo). This was because the wall with the window ended on the flat roof, which has a 1:12 pitch. The made it very awkward for the drywall, and this was why it was all crooked. It also didn't transition well into the straight lower section (garage ceiling). I spent a bunch of time basically calculating the new angles, and arranging a set of guide wires, and installing new 2x4s in the correct locations. This fixed the ceiling, and once the new drywall is installed, it will look great. I also insulated the whole space, and installed (or started installing) a vapour barrier. 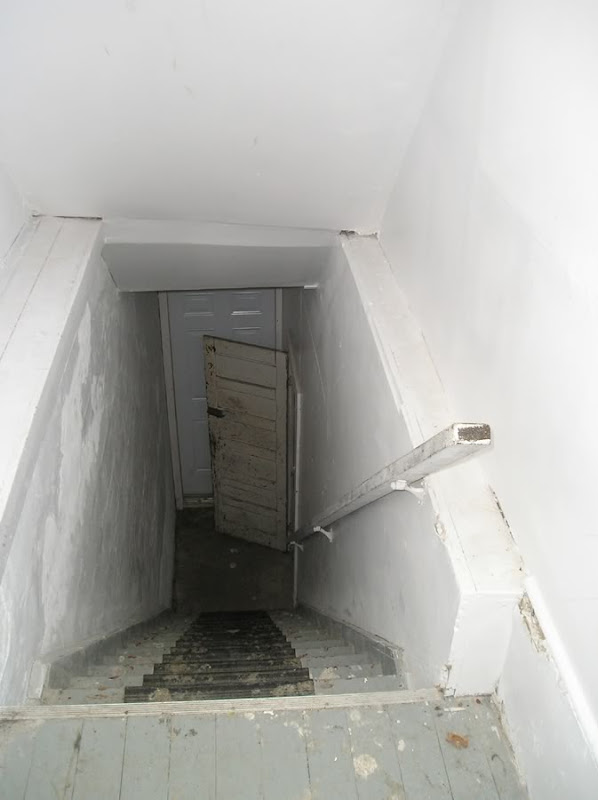 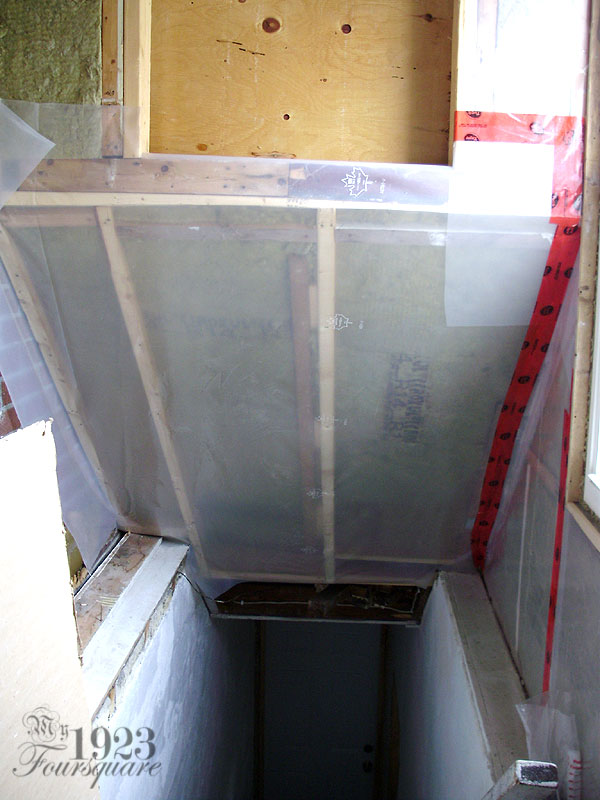 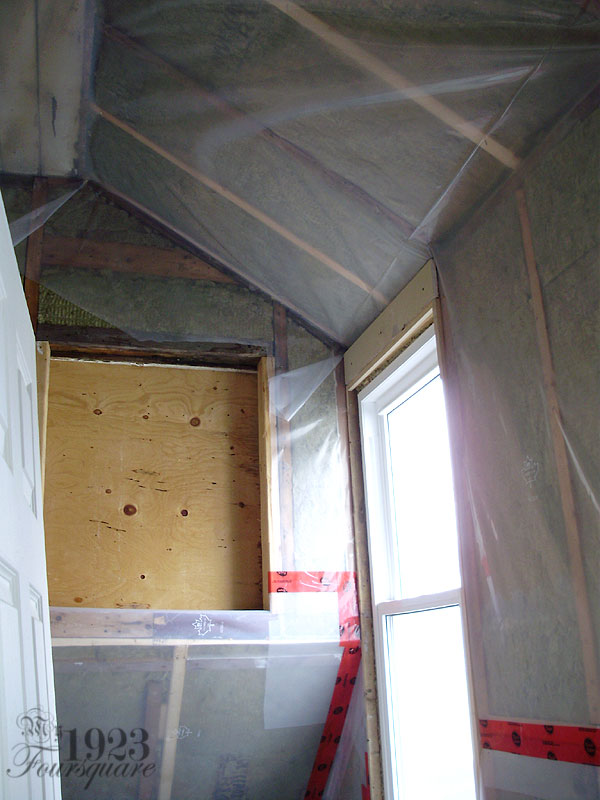 I spent a considerable amount of time relocating the light fixture to the centre of the room. Originally (you can spot the old hole) it was near the top of the door. Now it's closer to the centre of the ceiling, and if I want, I can install a hanging fixture which won't interfere with the door. 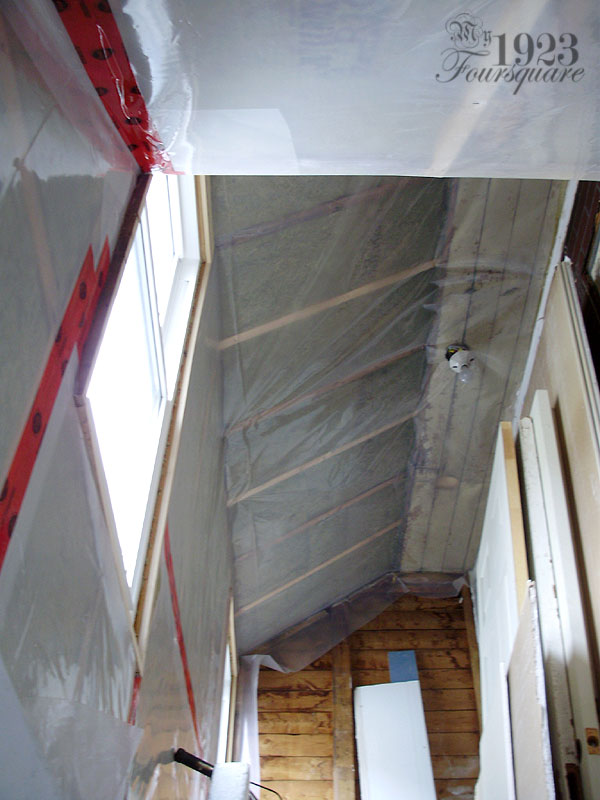 I still have that back wall to insulate (it's only the thickness of a 2x4 though (and I have no idea why since all the other walls are 3 1/2" deep).

These are the wood strips around the windows that I needed to install. The drywall will end next to them, and they will be completely covered by the new mouldings. You can also see one of the two new outlets I installed (in case I want to have Christmas lights in these two windows - and somewhere to plug a vacuum, etc). 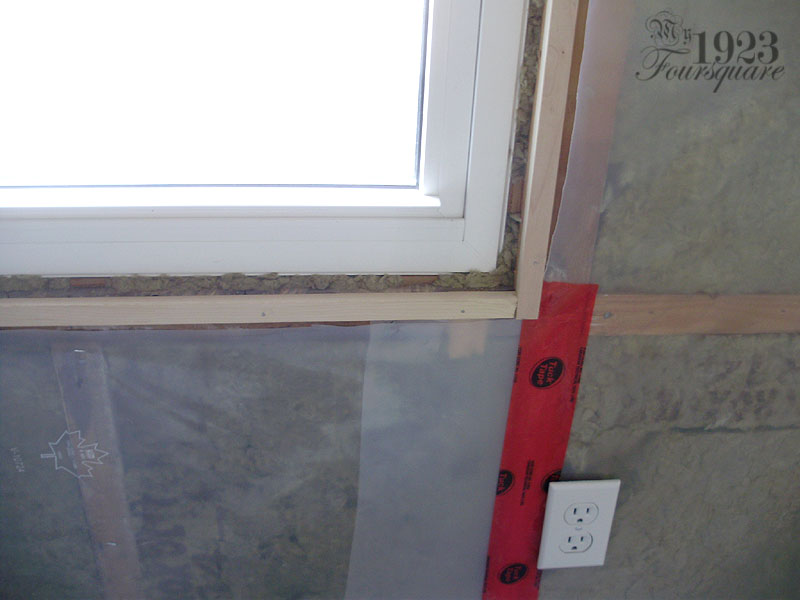 By far the biggest undertaking this year was the rebuilding of the entire 28 foot long exterior wall of the garage. Over the past few months I've been installing insulation and vapour barrier on it in preparation for drywall (the entire interior of the garage will be finished in drywall, and painted, along with window and door casings (eventually). 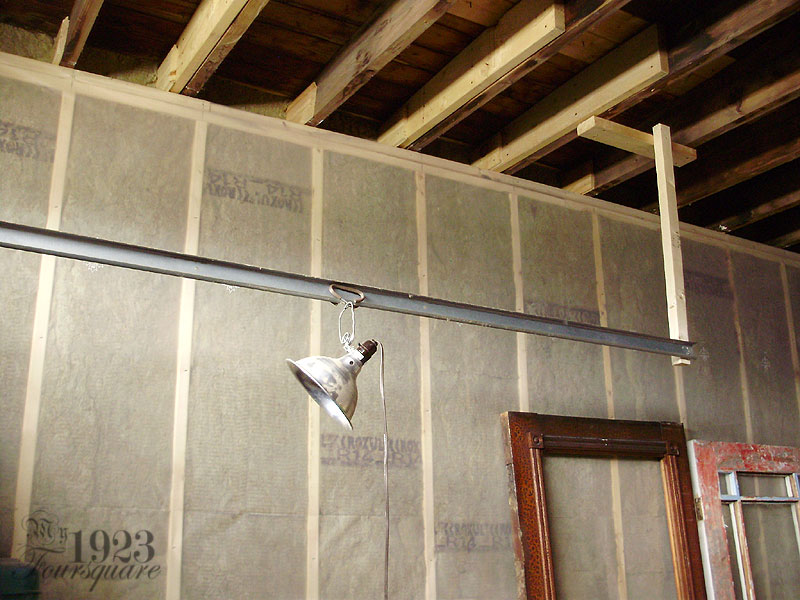 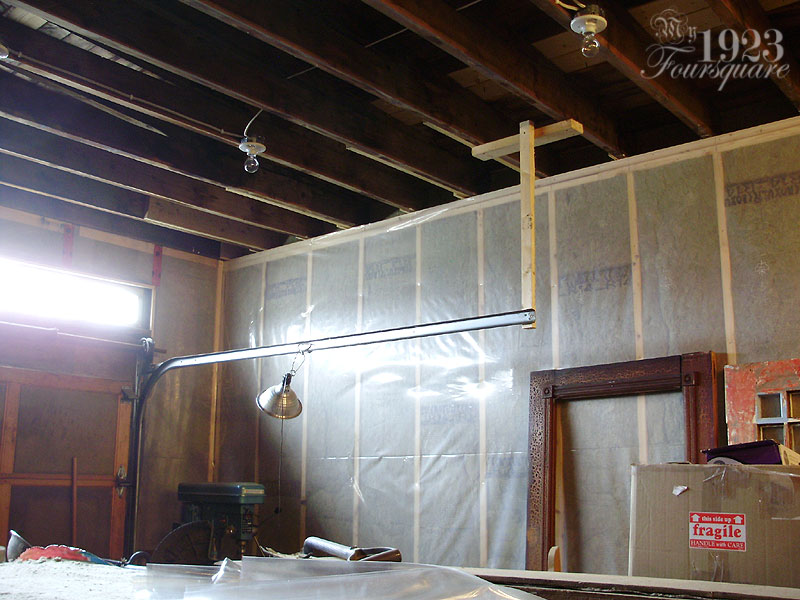 I also installed new (old fashioned and inexpensive) light fixtures. These are new octagonal boxes fitted with plain porcelain fixtures and clear bulbs. They're on 2 circuits, one having 4 lights, and the main one having 6. 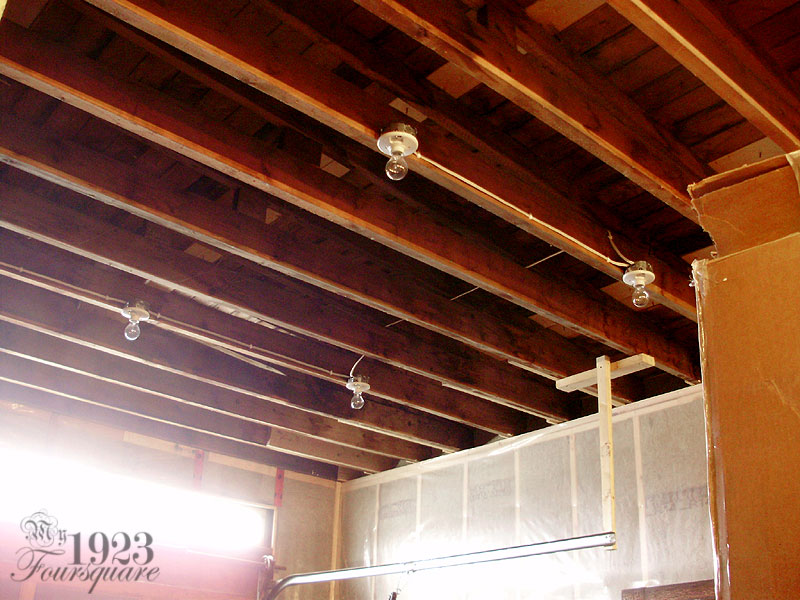 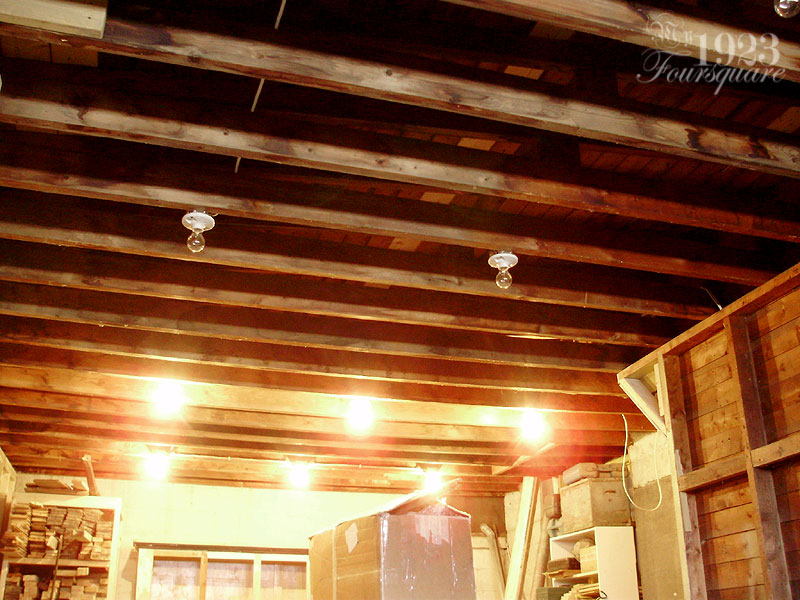 Next, I have a few fun woodworking projects to show off.

For about 1 or 2 years (or possibly even longer?) I've been making do with this metal rod to hold my rolls of toilet paper, all the while planning to make a suitable replacement for the missing original. Since I was making this new, I decided that it should match my curly maple vanity (most antique ones are just painted black). 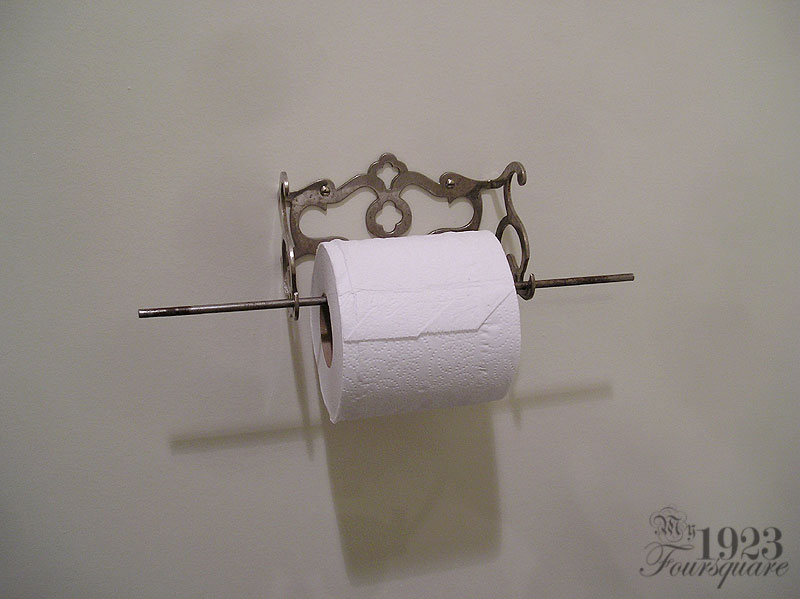 After examining several photos of original toilet paper holders, and even buying a beautiful old set of chrome bathroom accessories (the holder was not the same size though), I found a fairly simple way to reproduce the roll holder. I used spare clock door handles for the knobs, and added some wider flanges on their bases. These were then threaded, and matching brass inserts were made for the wooden rod. The inserts were hammered in place (very snug friction fit), and then I finished the parts to match the vanity. 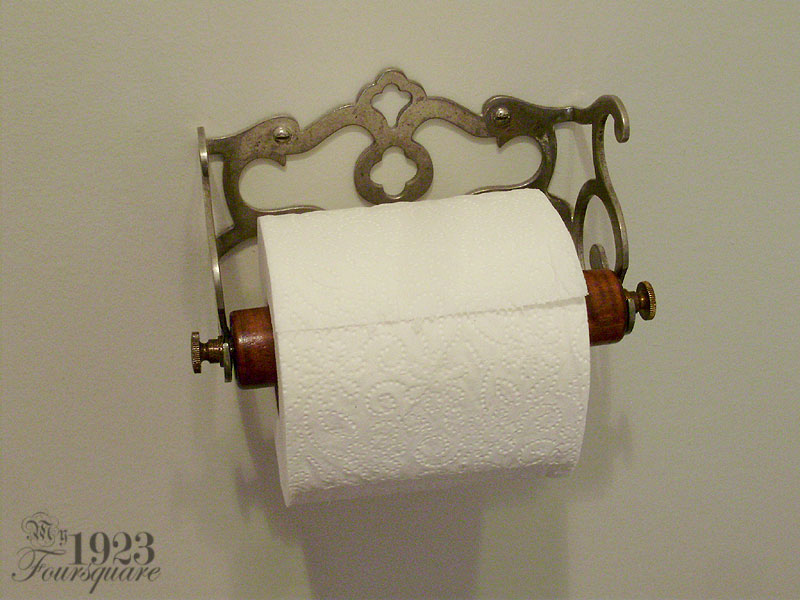 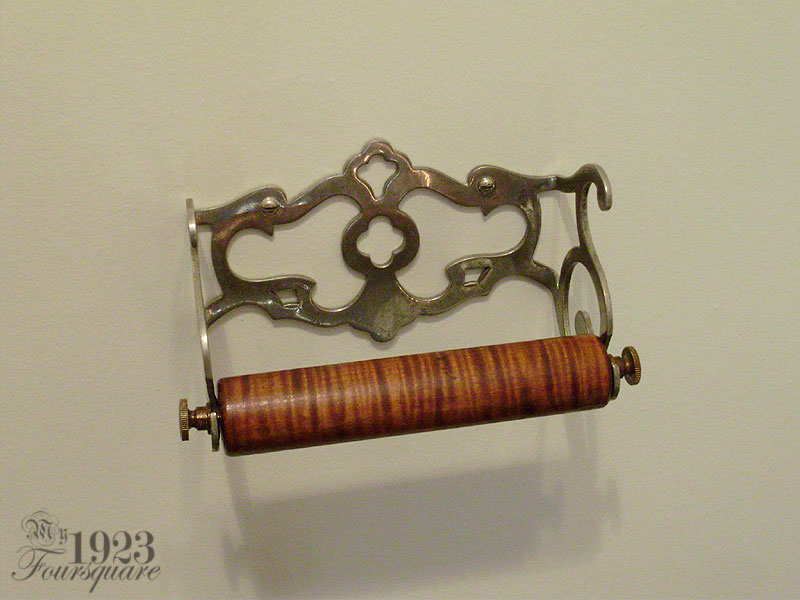 The brass knobs were antiqued with a thin spray of coloured lacquer. 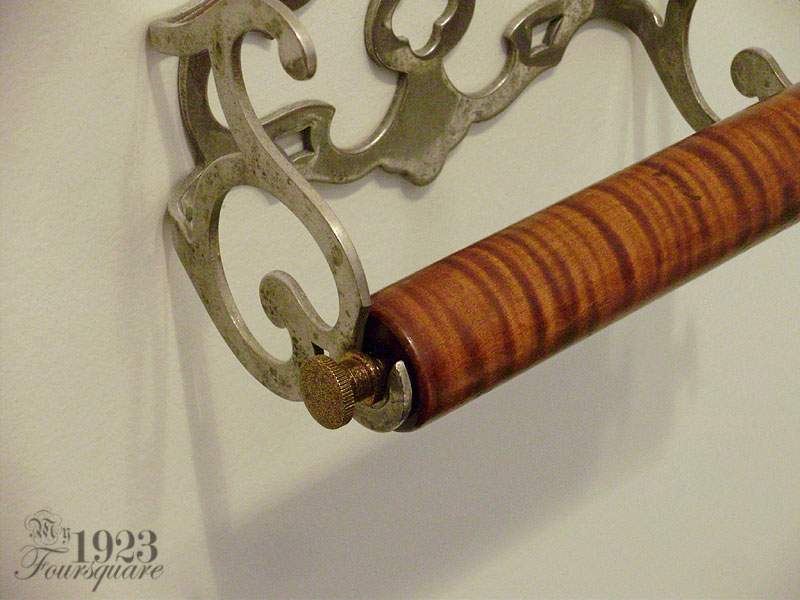 You can see how the reddish brown is a perfect match to the vanity (I used the same wood, and the same stain). 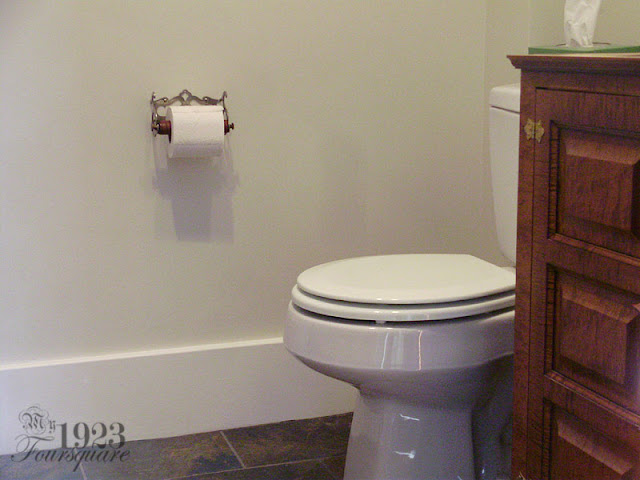 Then I finally made the top display shelf for my Cherry Bookcase. I may want to change around the display in there, but currently I have 2 small clocks, several old alarm clocks that were in my grandfather's old things, and 3 of my early whale oil lamps (and books). 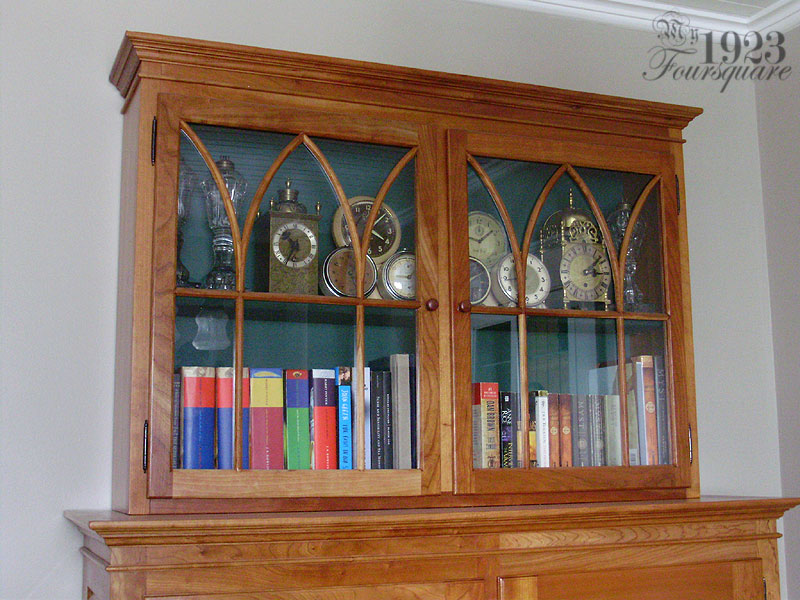 The shelf was made in pine, and bevelled on the front edge to make it look a bit thinner. I also had to make a curved cut out at the front to allow room for the two door catches. I painted the shelf to match the backboard. 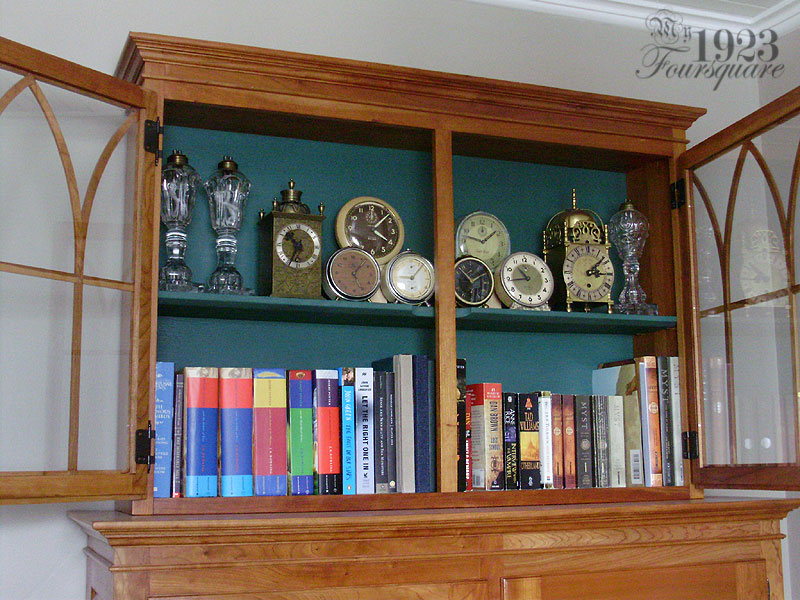 Lastly, I have just two more oddball bits of news to share.

First, I was THRILLED to find one store that still had a bit of tintable oil paint for sale. As some of you might know, pretty much ALL oil based (alkyd) paints have been taken off the market, except for spray paints, and a few "Rust Paints" like Tremclad. Unfortunately, I still haven't painted the upstairs floors (there's the spare room left), and I still need oil paint.

The man was able to match the colour through the computer (I knew it was Florence Brown off the top of my head) but when I got home, I noticed it's not the same shade. AT ALL. It's fine though, since I'll simply use it for the first coat, and I should have enough of the "L" Room floor paint to do the second coat.

My original colour is on the left, and the new (lighter and less reddish) is on the right. 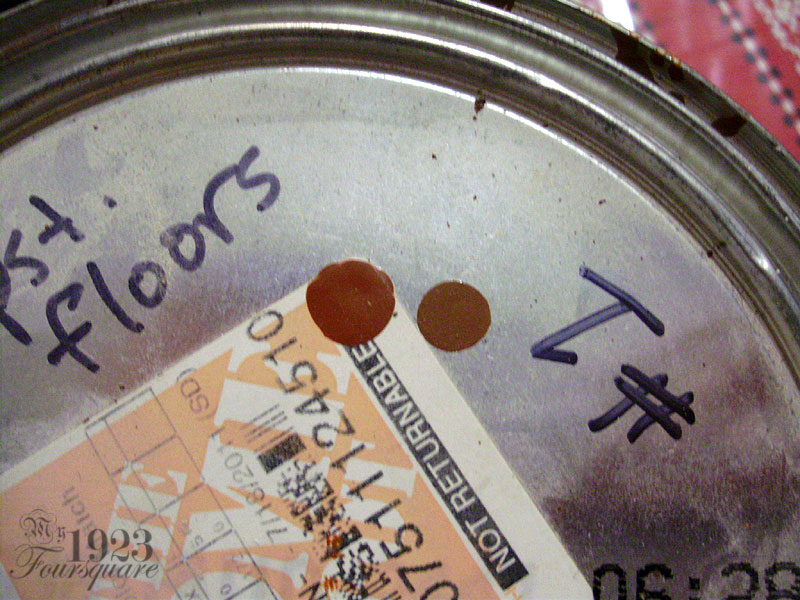 The last bit of news was a failed house explore that I'm still sad about. 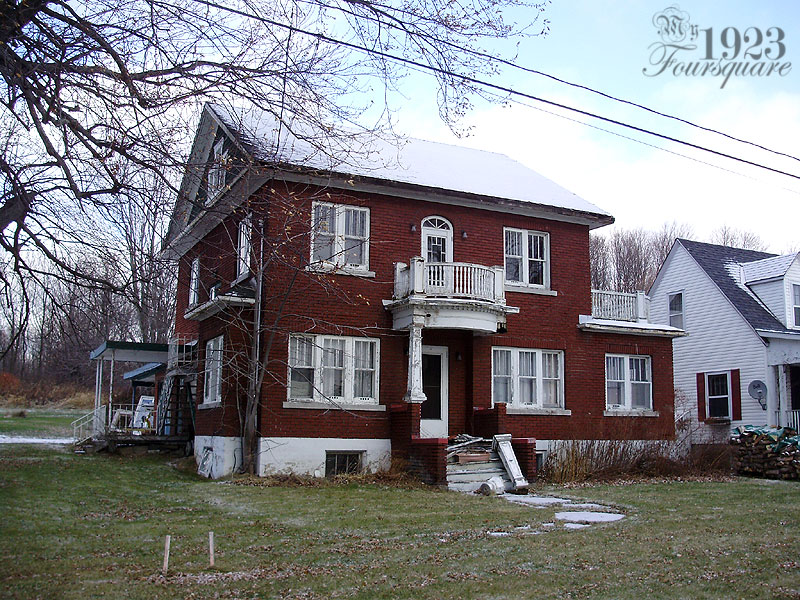 This is a gorgeous, and rather large house near the outskirts of town. It has been slowly decaying for at least close to 10 years, and just this past year or so, part of the front porch has rotted and collapsed. I wasn't sure at first if it was really abandoned or not (and I'm still not 100% sure - you'll see why in a minute), but it has a rotting roof fascia, at least 2 or 3 broken or open windows (note the basement window on the side of the house is tilted open), and from walking by it, it looks largely empty (almost no curtains, and no visible furniture). One of the attic windows is wide open (and according to Google Maps has been wide open at least since summer 2013).

I went to go look at this place about a month ago, and it was quite cold outside. Despite the fact that the house appeared completely abandoned, there was a sign on the side door (which looked ajar) that said "Private Property", and it appeared that the house was still be hooked up to electricity (the meter was still there, and looked to be working). This left me quite confused. There was also a boat parked in the open-front garage at the back.

I was just about to head for the side door when a man across the road yelled at me: "Hey! That's Private Property!" So I just told him I was looking around, but he kept an eye on me, and I just left. I assume he might be the owner, and I *SHOULD* have just asked him, but he really didn't seem too friendly so I don't think I'll be headed back there. I had gone around 10am on a Tuesday, so if this guy wasn't at work then, he's probably retired, or he works from home. Since he's already spotted me, it's too risky to go back. I don't want to get caught or have the police called on me, so it's not worth returning, but part of me REALLY wants to see the inside. I guess it just wasn't meant to be.

Other than this house, I've pretty much exhausted the supply of abandoned houses in town. There are around a dozen, but all of them are sealed-up tight.