Alright, as promised, and since I have a few spare minutes I can claw out of my schedule, here we go. Photos are pretty self-explanatory. 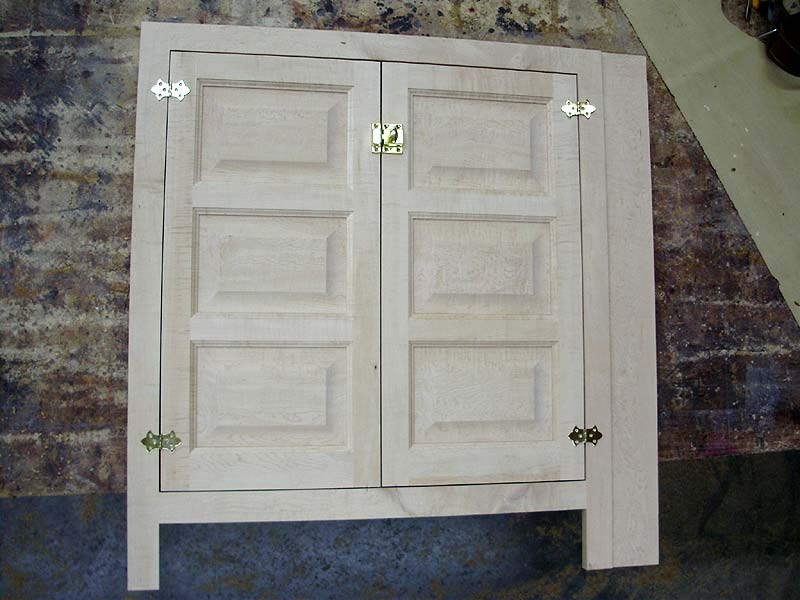 This is the board that will make-up the baseboard (toe-kick) and it will have a fancy cut-out in it on the front. 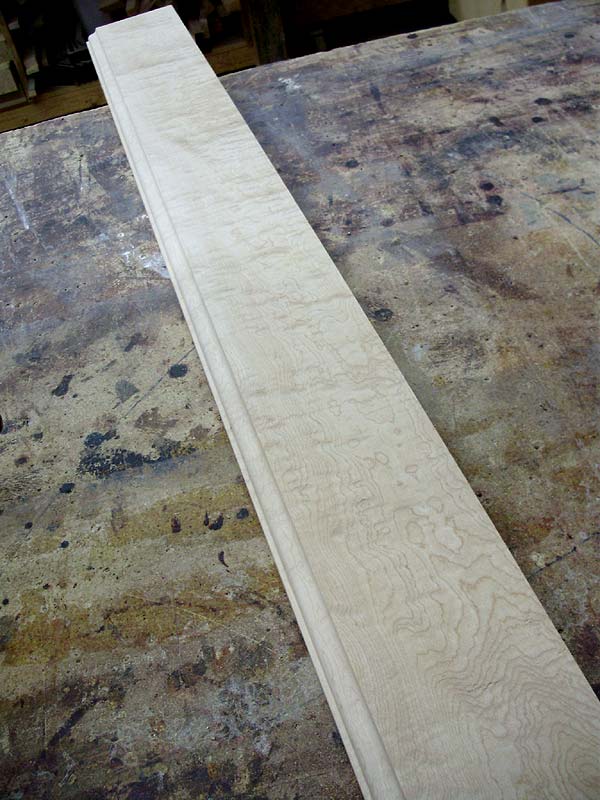 I wish I had this much space to work at home. 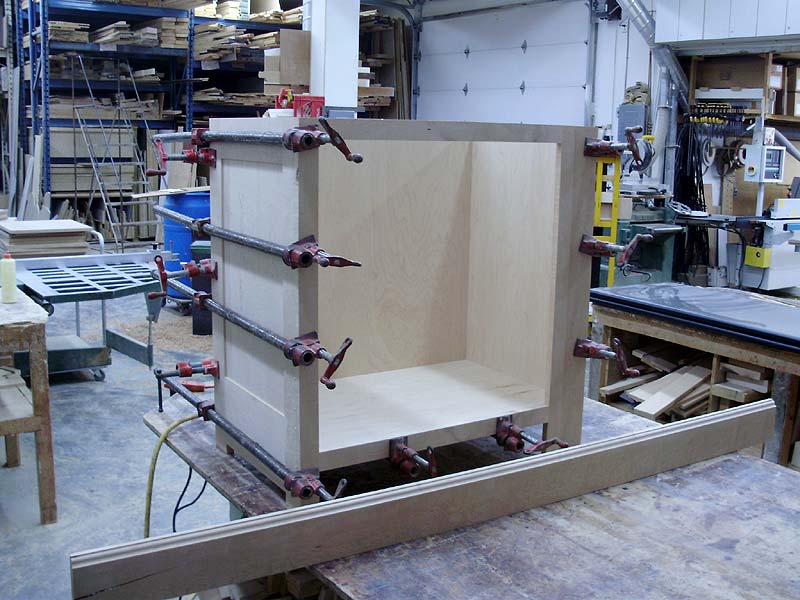 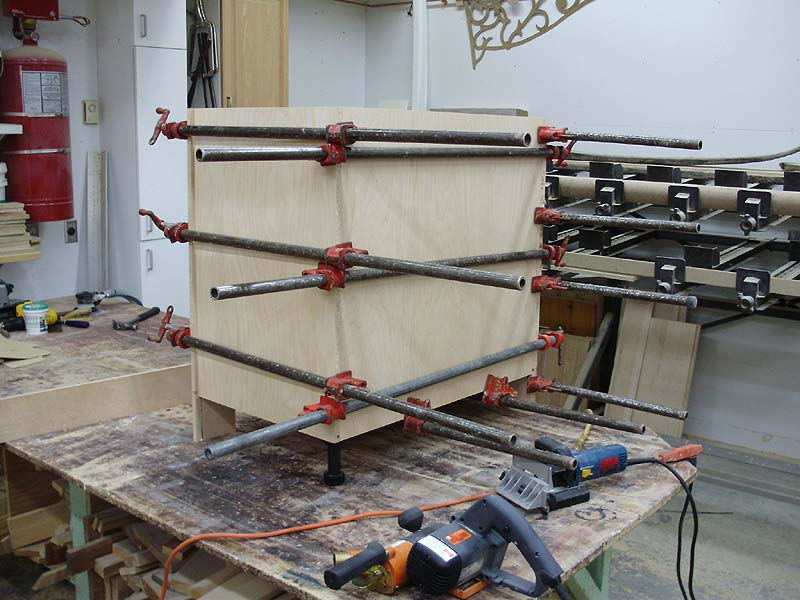 Main part of the case is sanded and ready for finishing (I'll also be adding a top Roman ogee moulding, and most of the bottom trim). The doors aren't sanded yet, but I started fitting some hardware (bullet catches). 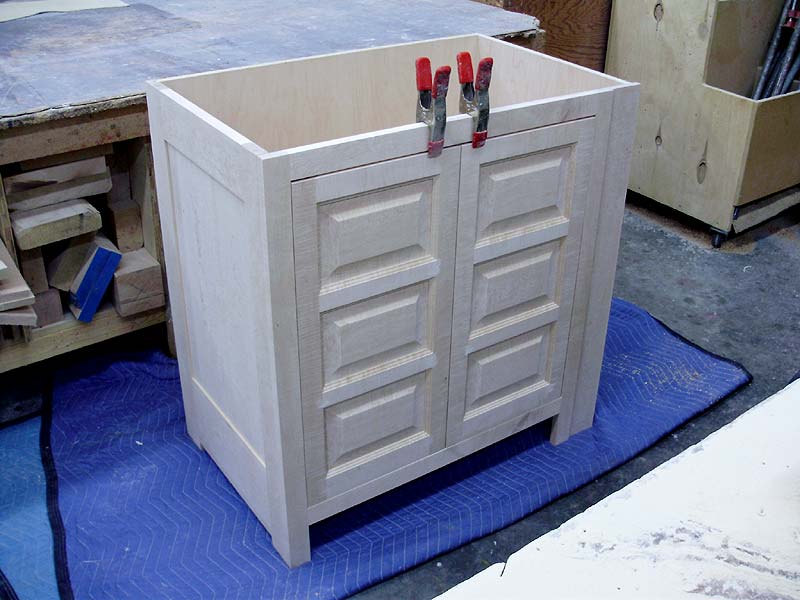 Some of you might remember this wonderful old house that I posted about a while back. The one where I picked up the beautiful solid wood front door that was thrown out: 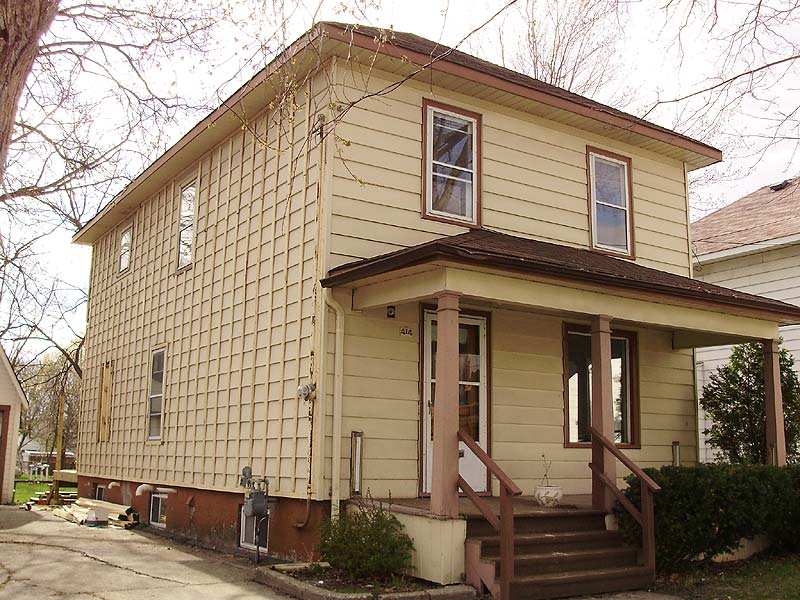 Here's what it looks like now. I suppose the siding isn't THAT bad, but I hate that new front door with the beveled glass, the new vinyl windows, that awful plastic or aluminum railing that's WAY too high, and the icing on the cake is the absolutely AWFUL shutters that are TOO TALL for the windows. I was so pissed when they installed those shutters. 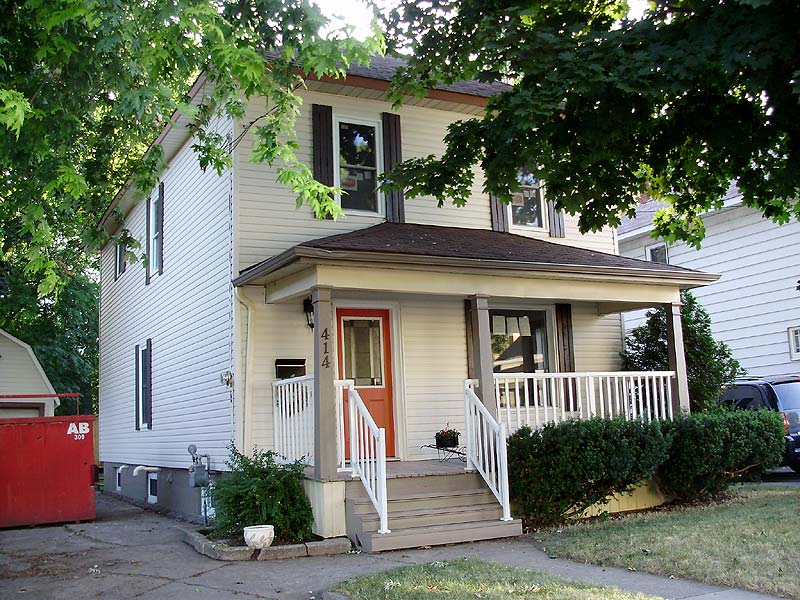 Then there's this formerly wonderful old house near my Mom's place. I had posted about it a while back: 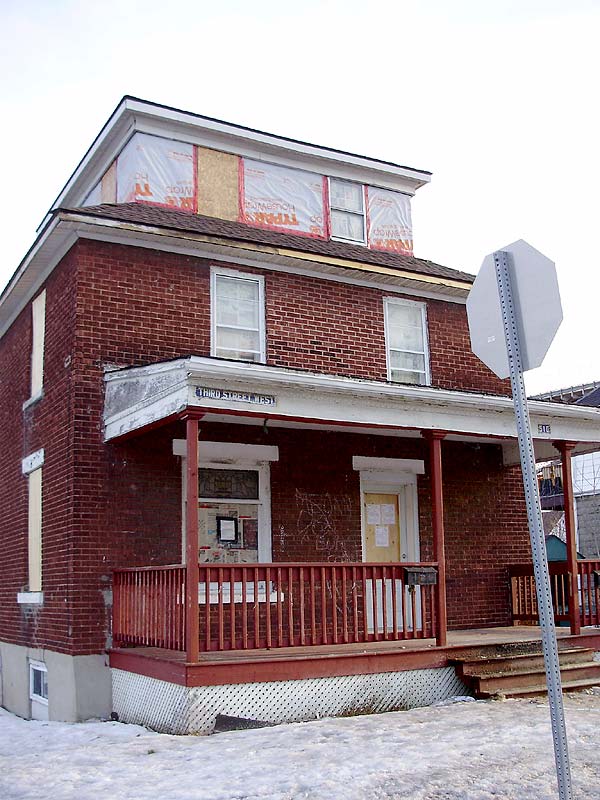 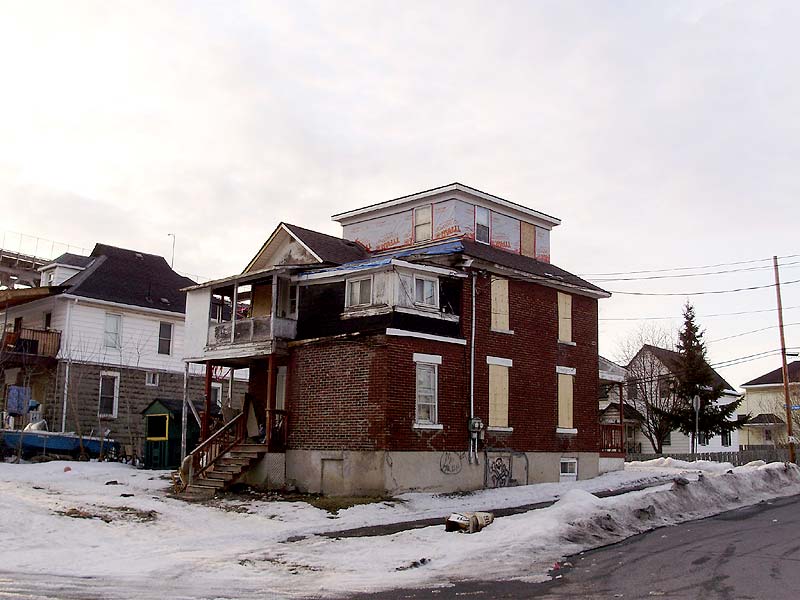 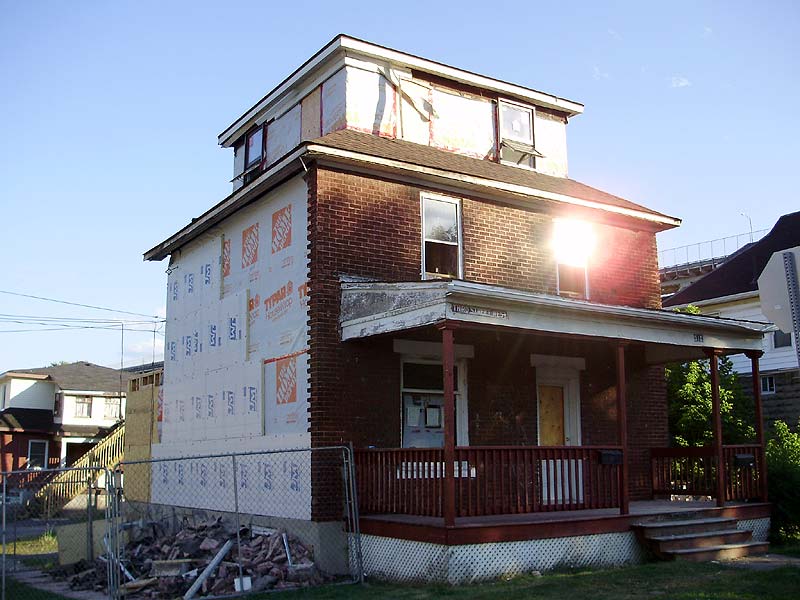 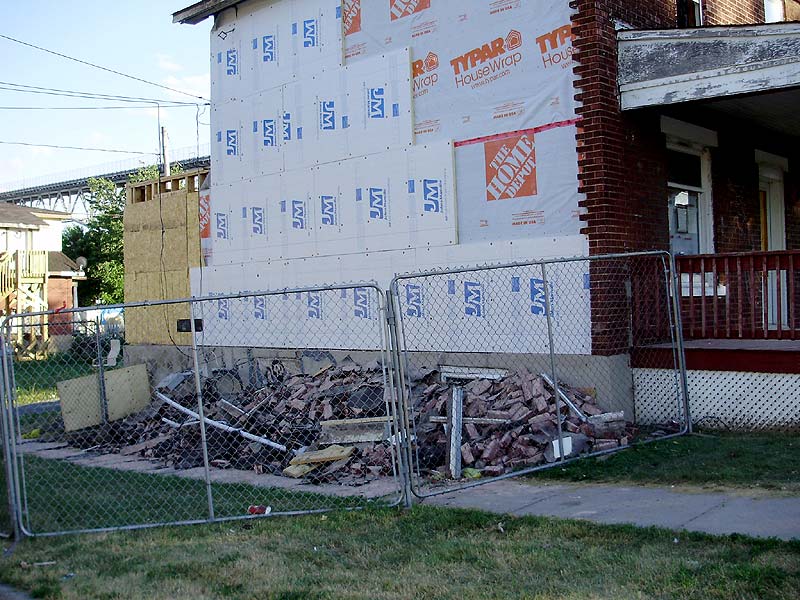 I have NO IDEA what the hell they're doing to the back part. 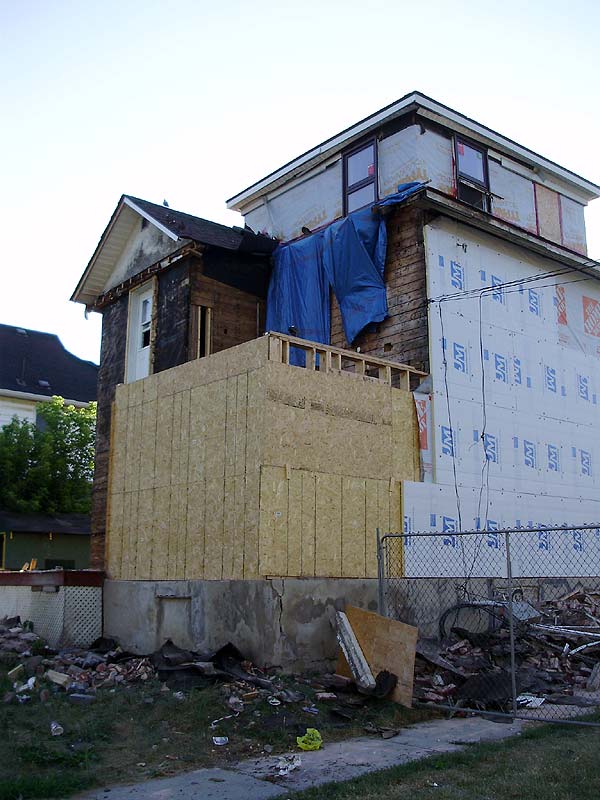 The sad part is that it doesn't really look like they're keeping/saving/reusing the bricks. What kind of moron gets rid of brick?

Also, the inside is gutted completely. Only studs left. I had walked by a few years ago when it was rented, and I know there is/was a wonderful decorative archway between the living room/dining room but I have a feeling it's gone now.

Another side note: this is the house where I picked up the busted-up stained glass panel. It used to belong on this side going up the stairs. It's been capped over with painted plywood for many years though, since it shows up like this on Google Maps watermarked from 2006. 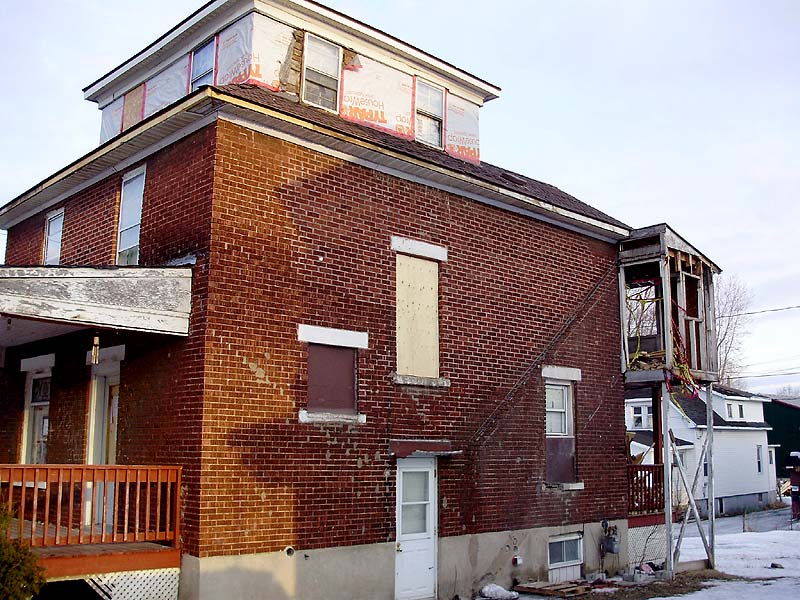 Ok this is just a quick heads-up that I'll be making an update post shortly (maybe tomorrow). I got a bunch more work done on the vanity last Friday, and a bit today, so I have photos coming soon. But for now, it's late and I'm headed to bed. I seem to have so little free time these days... I also worked a bit in the garage, since I want to build a large storage cabinet.
Posted by JC at 10:22 pm No comments:

Soooooo... Yesterday (day off for Canada Day), I decided I *had* to do a bit of work on the house. I didn't feel like working on anything on the to-do list (ugh), so I did one of those projects that's really not that important yet, but still needs to be done at some point.

I decided to tear out the crappy new laminate/plywood(s) to expose the original hardwood.

So this is how that went...

Before. I don't think I can fully express in words how much I can't stand cheap laminate flooring. And these were the cheapest of the cheap. Popped joints, chipped edges, scratches, dings, scuffs, and the awful installation didn't help it either. 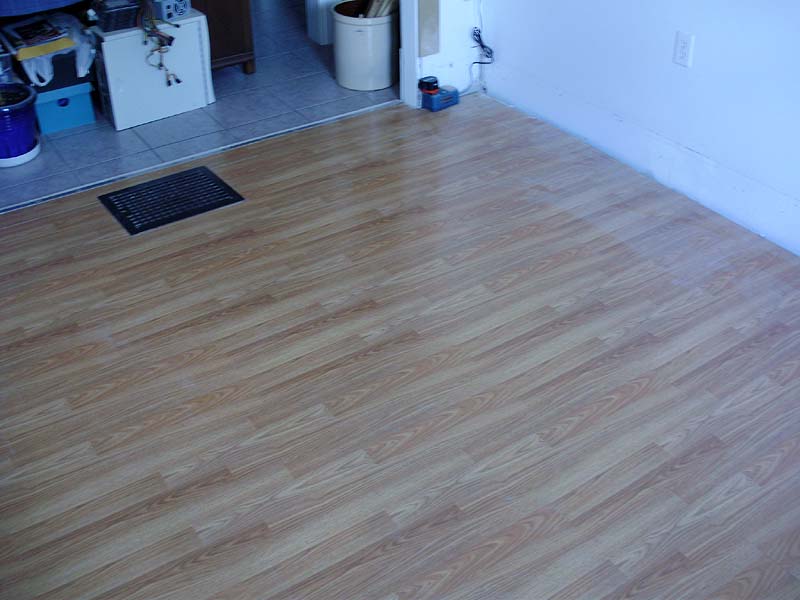 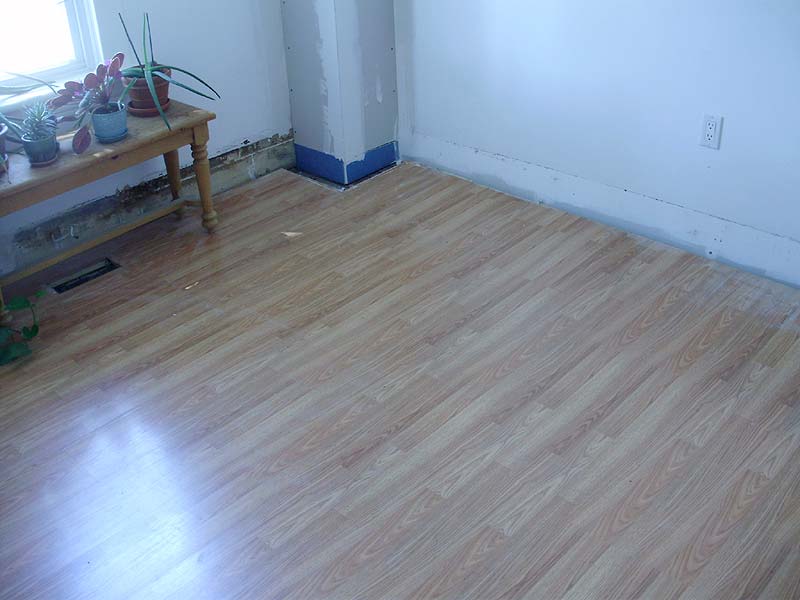 Don't you love the nice transition strip(s)? Painted wood with silicone on one side (which is grimy and impossible to clean properly), and a nice metal strip, held in place with dozens of THREE INCH screws. 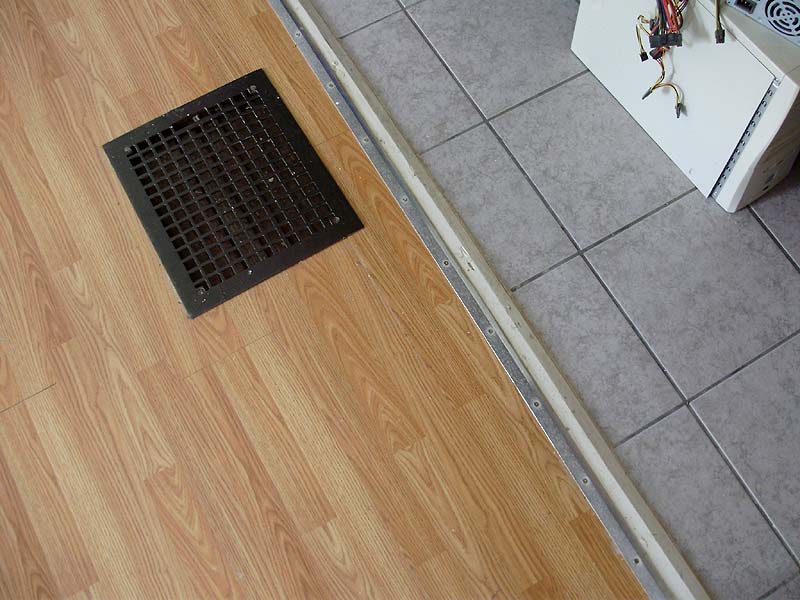 Not only did they not stagger the plywood, they also installed it over the same seams as the previous 1/4" layer. WHY? 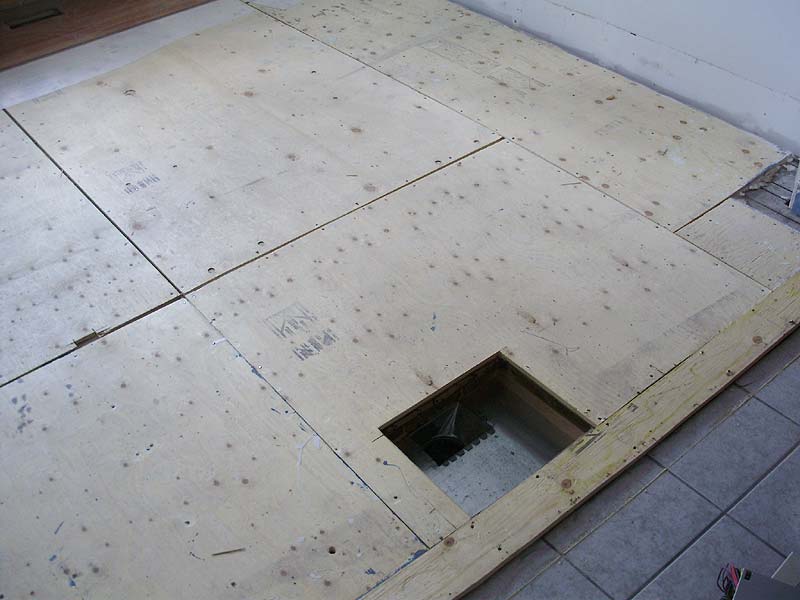 The plywood came up easily because they nailed it down with DRYWALL NAILS. Yup. And you can tell by this one sheet how much of a crappy job they did by the location and quantity of nails used. Some sheets had a ridiculous amount (like 9 nails for a 12" square), and others had just a handful for a 4x8 sheet. They also randomly threw-in a few screws here and there. 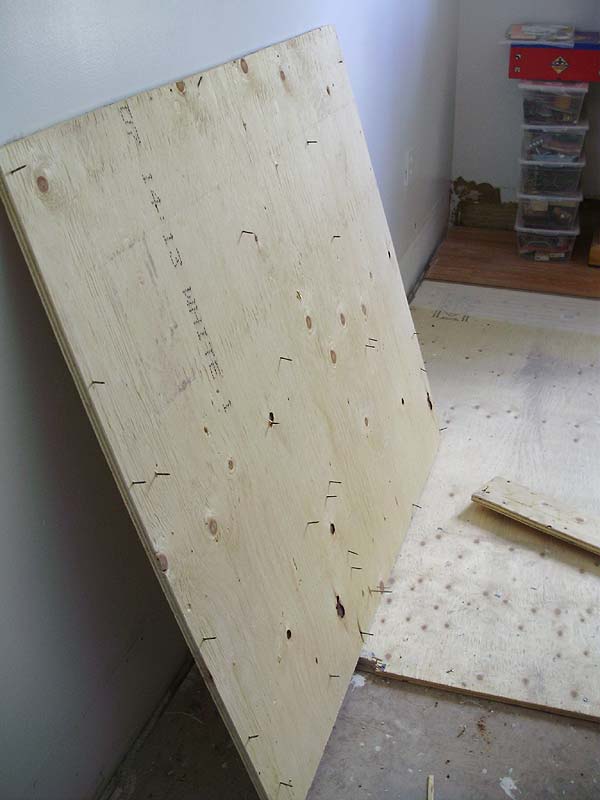 The first peek at the floor shows off a few issues... 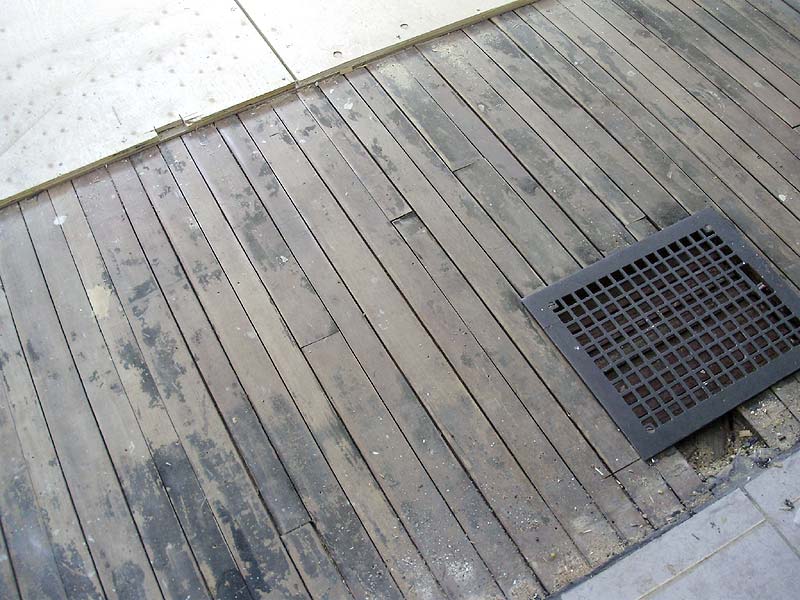 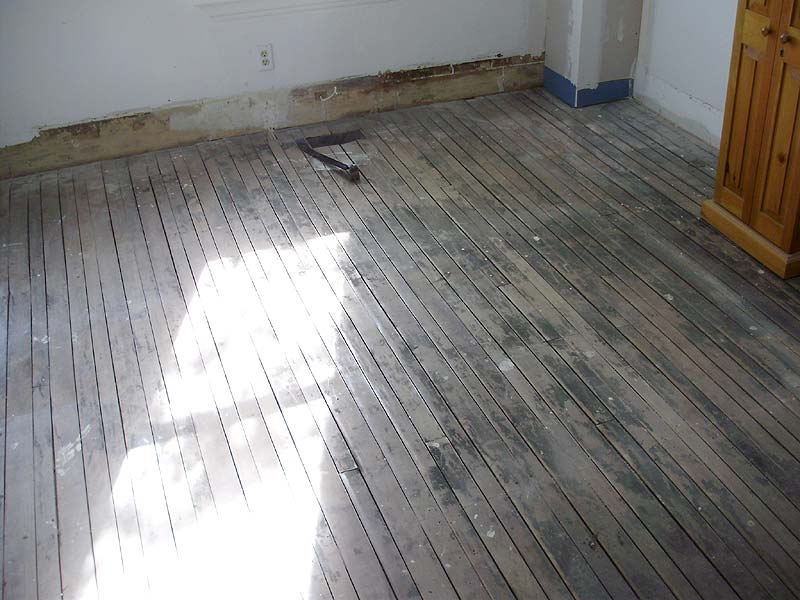 And yes it looks exactly like this in person. It looks BAD. There's all kinds of carpet pad residue (who on Earth would want a carpet in the dining room??? Eww). Tons of large gaps (some that are nearly 1/4"), and a generally sickly looking colour. HOWEVER, under that, the wood looks to be fairly decent. I will refinish it providing that I can find a way to putty the cracks with something. 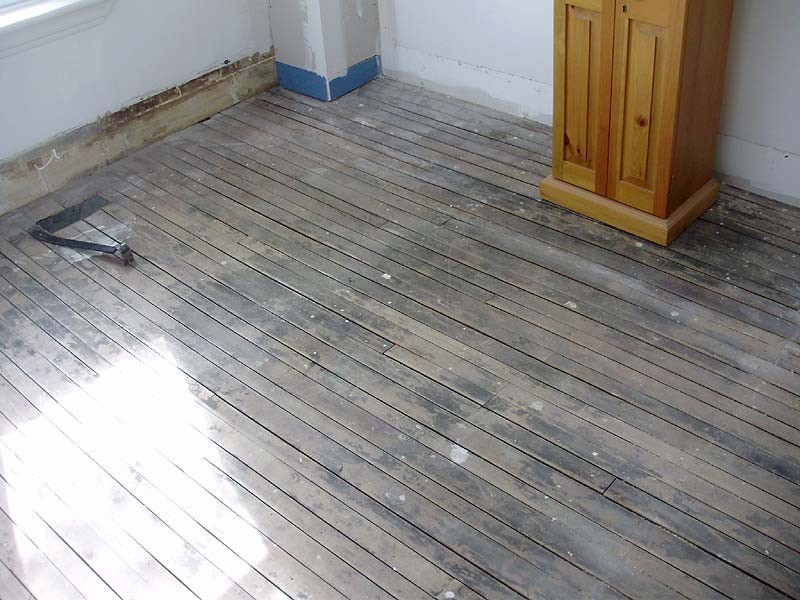 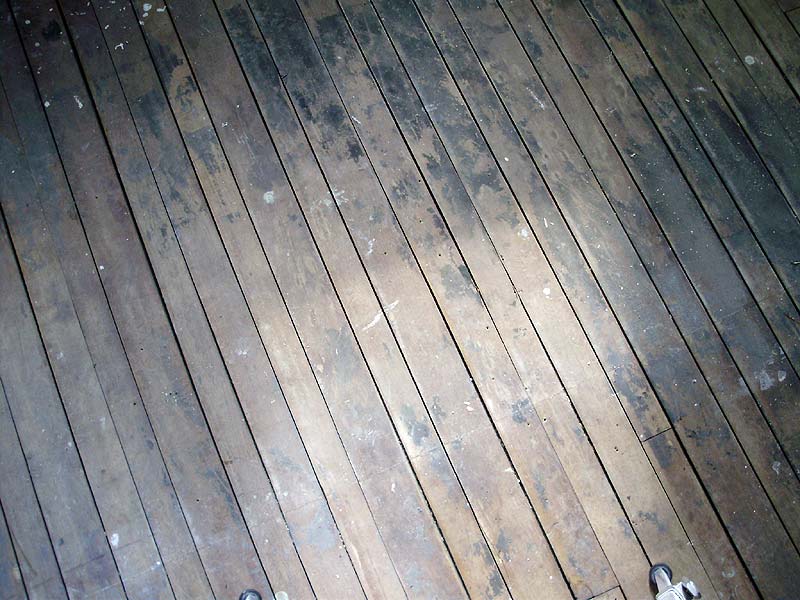 I will also have to get creative with some patching in several (at least 8) places. 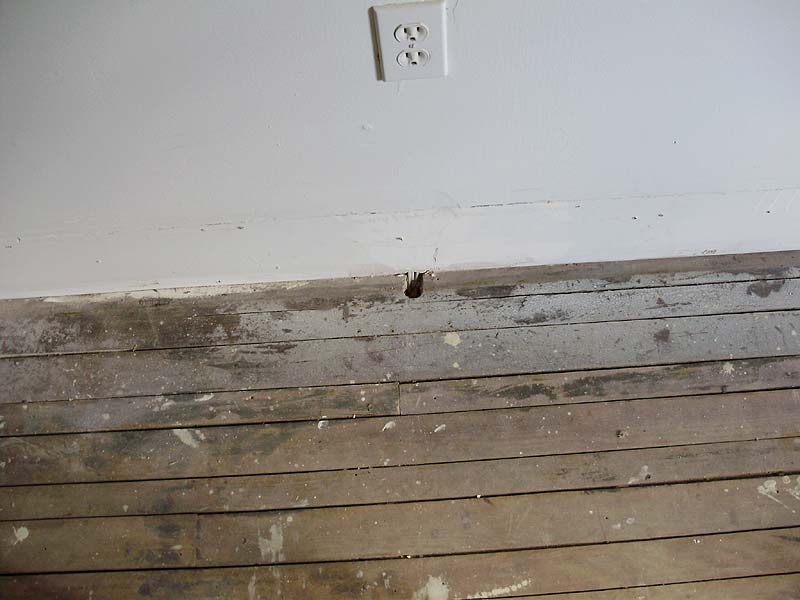 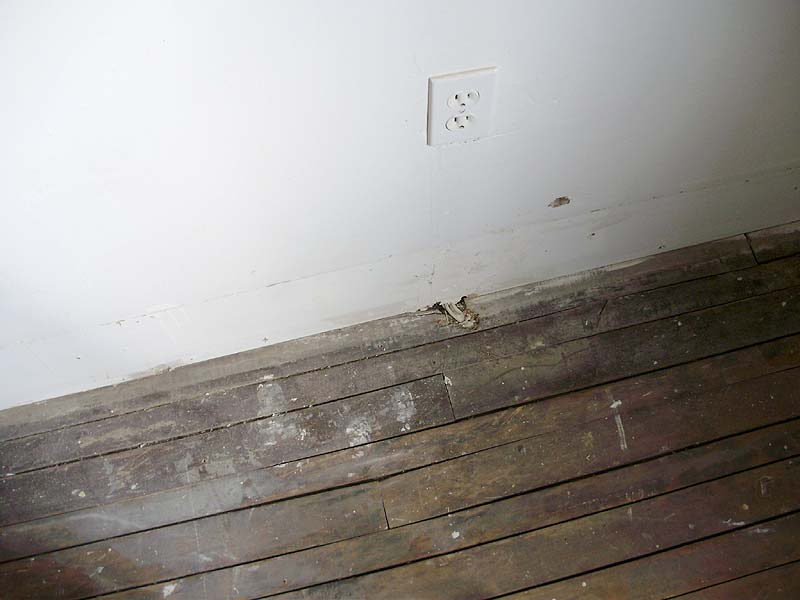 In this room they made no effort to rewire in a non-destructive way (unlike the office, where they passed the wires just far enough to hide it with the baseboards). 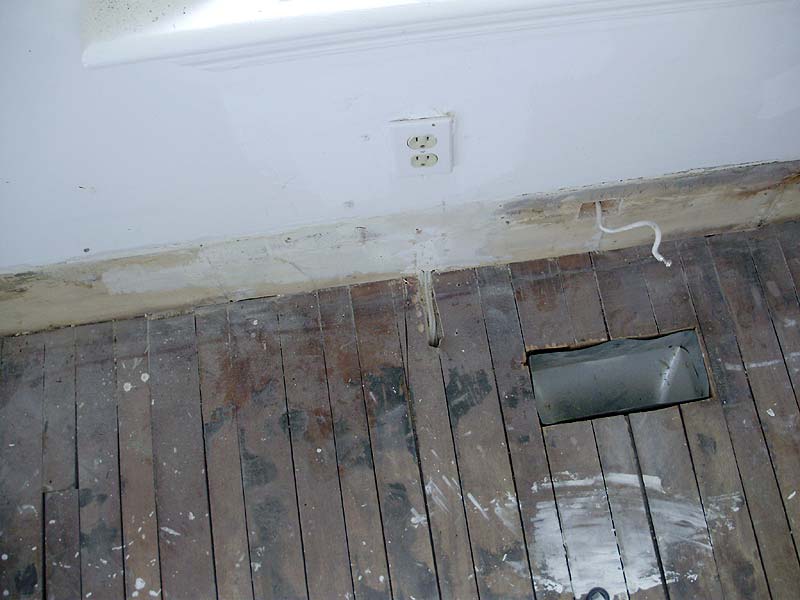