So my friend Devin decided recently to rip-up the carpeting in his living room. He knew there was hardwood under the carpet, and it was one of those "we'll eventually fix it" projects, but since he has a baby on the way, he's decided to tackle a bunch of projects NOW.

So he sent me a message a few days ago with a few photos and asked me if I could give him a hand. 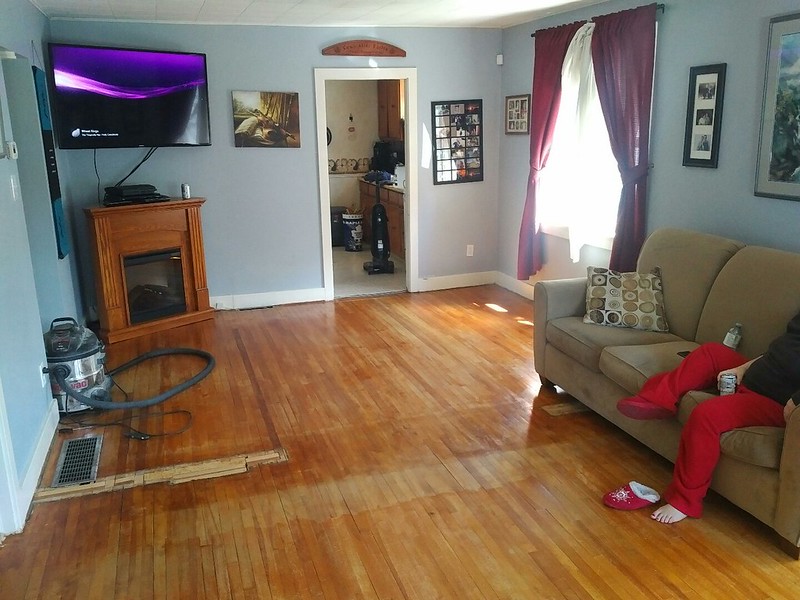 Since this used to be two rooms, there was part of a wall that had been poorly patched up. Originally Devin just wanted to fit some boards in there across the grain, but I told him that would look like crap, and that we could probably steal some flooring from one of the closets and just patch it in.

When I got there on Saturday afternoon however, the entire household was in a panic because there was a pipe that had burst in the basement. He and his parents were in the basement most of the day cleaning up and inspecting the damages. Luckily the pipe hadn't leaked for very long.

As this was going on, I made the discovery that our plan was NOT going to work.

If you look at the photo above, the shop vac is in a tiny hallway that leads to the bathroom, with one bedroom on the side, and one small closet in the hallway. To the front lower left of the photo is another bedroom (with a closet that buts up to the one in the hallway). When I checked the closet flooring in the hallway, I found that it was 2 1/4" wide birch boards, which are a half inch too wide (the flooring in the living room is 1 3/4" birch). Same in the two bedrooms and all 3 closets. Because of this, I made the executive decision to pry up a small amount of flooring from in front of the bathroom door (the span of the hallway). I made a quick calculation with Gen (who was taking it easy on the sofa - because she's pregnant) that the patching I'd need to do would only require about 7 floor boards from the hallway (which works out to about a 1 foot section of flooring. We could install new wood here, and it would be much less noticeable than in the middle of the floor in the living room.

With this decided, I spent probably an hour just trying to carefully pry-up that first board or two without breaking too much of anything. A few boards did snap into pieces, but I was able to reglue them at home and use them.

On this side (sorry for the blurry pics, they're all I've got) there was a section of wall as well as a heating grate hole (plus the cold air return near the wall). 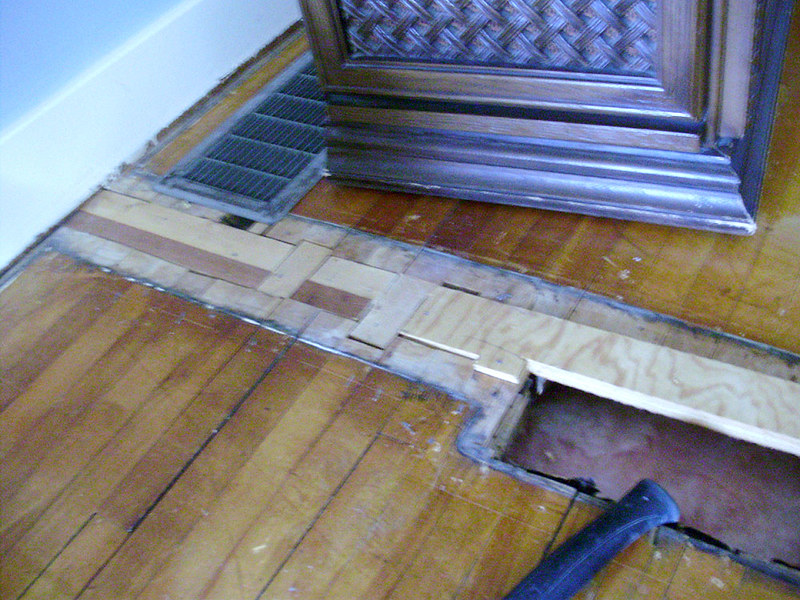 I started with this section. All the boards had to be cut to make a random staggered pattern. Once the boards were trimmed (using a multi-tool with a wood cutting blade), I then carefully cut and installed each section one board at a time. This it tedious since you want a nice tight fit. If it's too tight, you risk chipping or cracking the edges of the boards, and if it's too loose, you get unsightly gaps. I spent about 7 hours on this the first day (Sat), and finished this section and the other side on Sunday.

It looks kind of terrible right now, but once it's all sanded and the odd nail holes are filled, it should all virtually disappear. 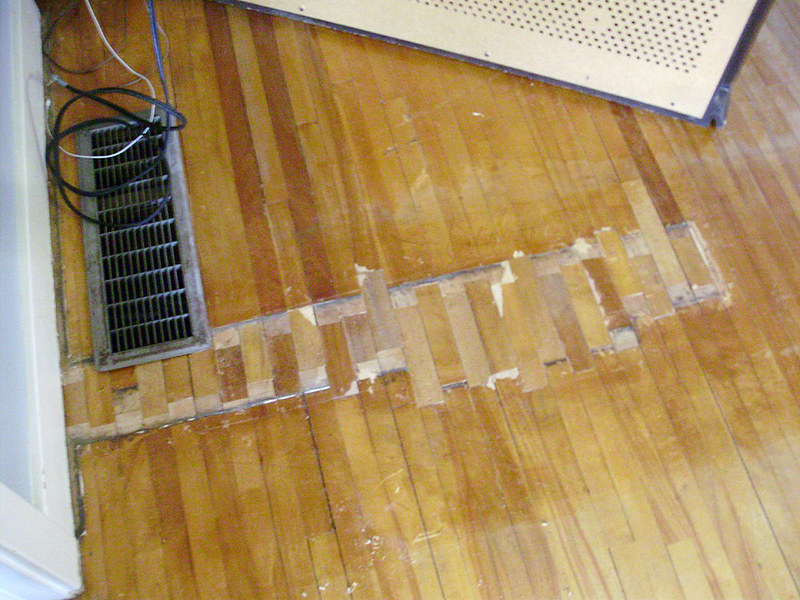 On this side I had to groove into the sub-floor to bury that electrical wire. 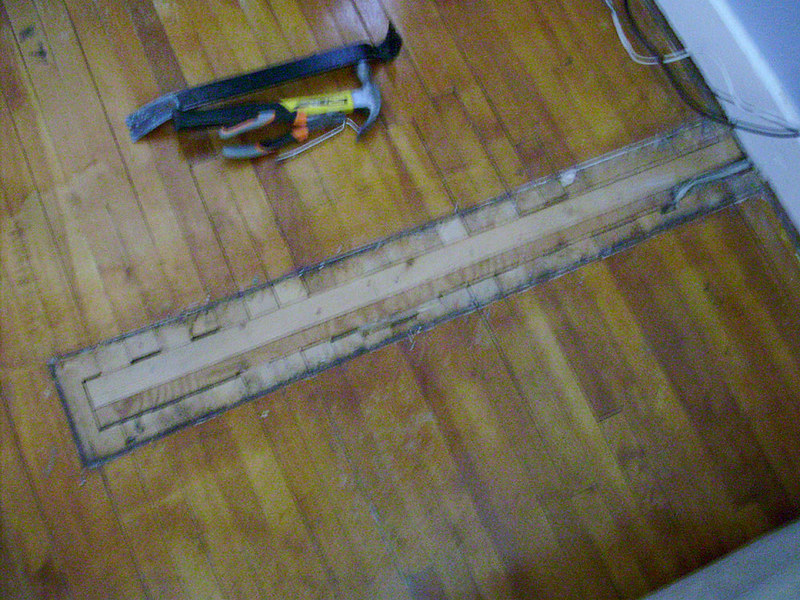 I think I must have done about another 6-7 hours on Sunday, too. I went in around 11:30 and didn't get back home until supper time. Maybe 5pm or 6pm? 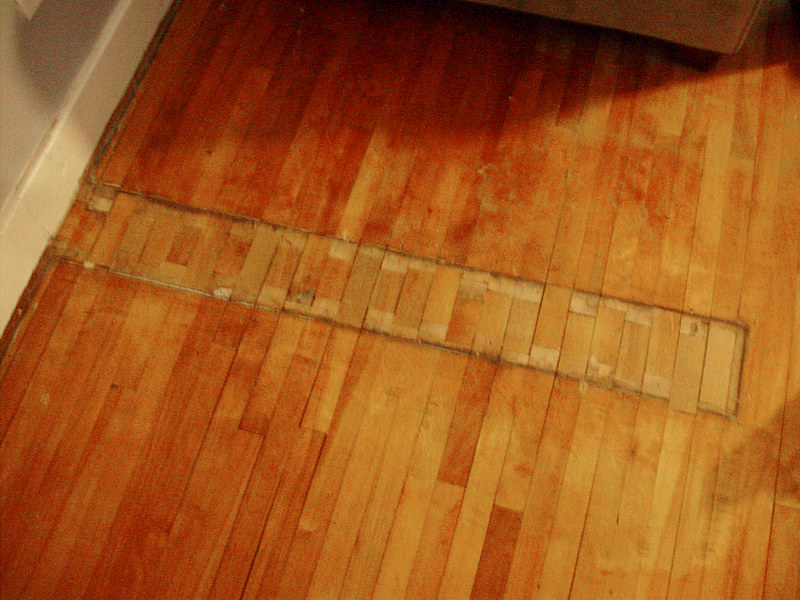 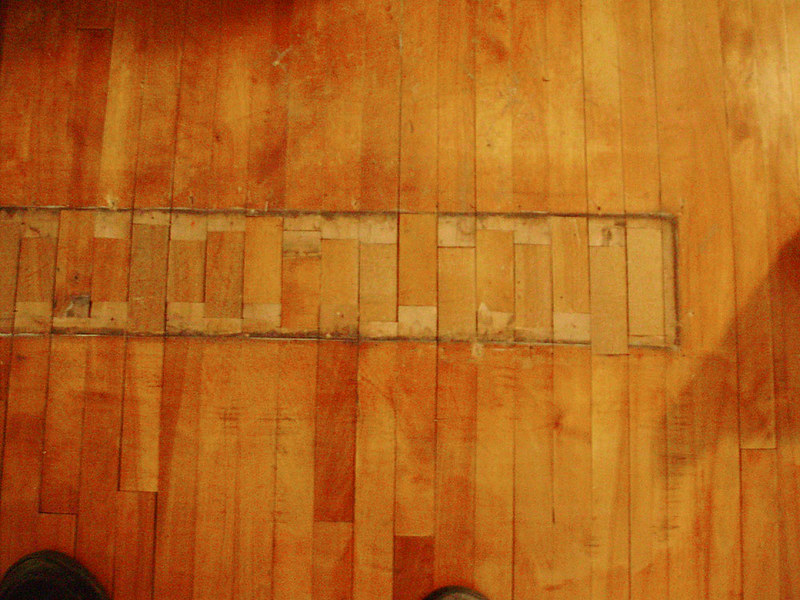 Overall it turned out pretty good. I did end up running a bit short on wood, and taking up an 8th row, but the overall section to replace will only be about 15" x 38".

The seams in the floor overall are very tight, but I suggested to Devin that he should putty these gaps (there aren't that many). I'll probably give him a hand to sand next weekend.
Posted by JC at 1:37 am 4 comments: