So the house has a new addition in the form of a piece of furniture. This is a wing chair I picked up at the curb down the road in May 2014. I have been on the lookout for a wing chair for a while, and I had spotted this one coming home from work. When I went to look at it, I noticed it had nice legs, so I brought it home. Now, right off the bat, I knew I'd be changing the chair if I decided to keep it. I absolutely hate the back (La-Z-Boy style pillow back), and when I took a closer look at it, I discovered that the legs were just cheap plastic. 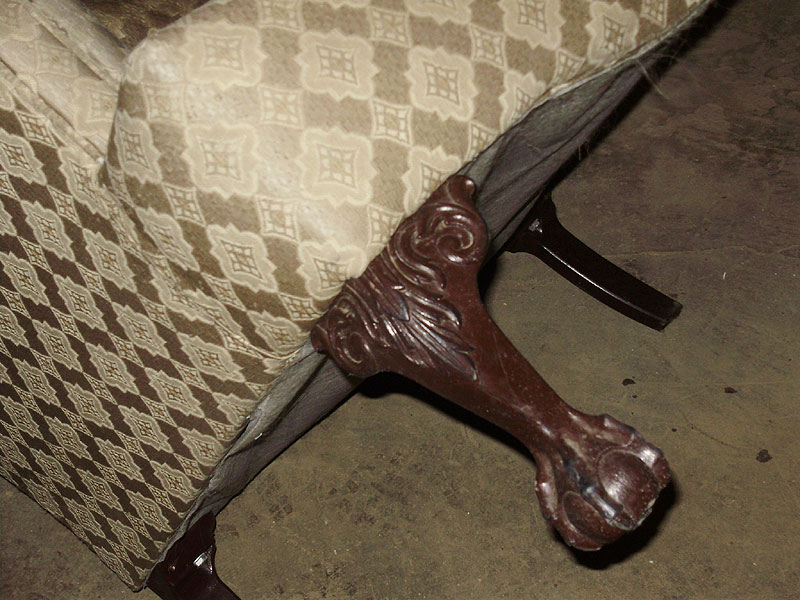 Ugh. At this point I wasn't sure if I should just put it back at the road, or try to save it. I decided to strip it down somewhat, and see if the frame on it was decent.

With just the back removed, the chair already looked a lot better. One other feature that I really liked on this chair was the lean on the back rest. 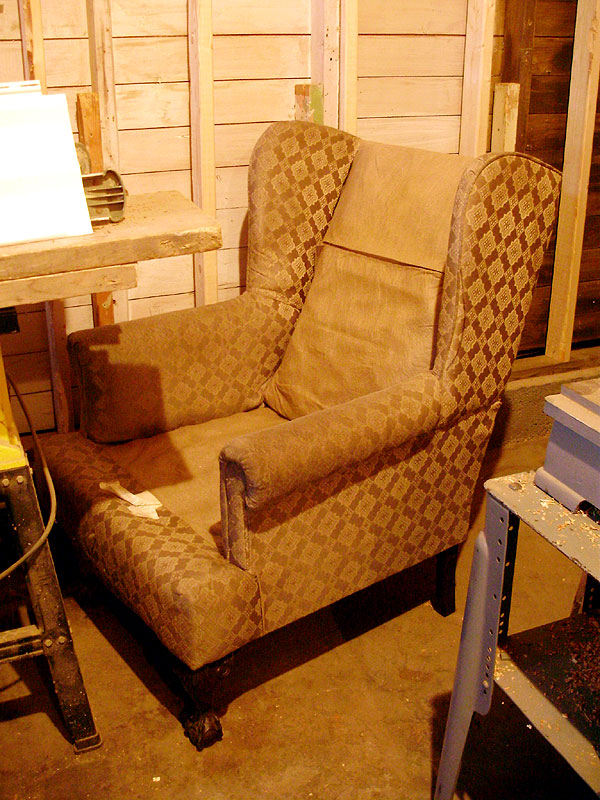 I decided that I'd make new legs, and make a few modifications to the frame. The frame on it was solid wood (mixed hardwoods) and it was fairly decent (far from the best, but it wasn't made with scrap wood or plywood).

The following 3 photos were some of my inspiration for the legs. I didn't want to do any complicated carvings or shaped Queen Anne style legs. Since I have a lathe, turned legs would be easiest option. 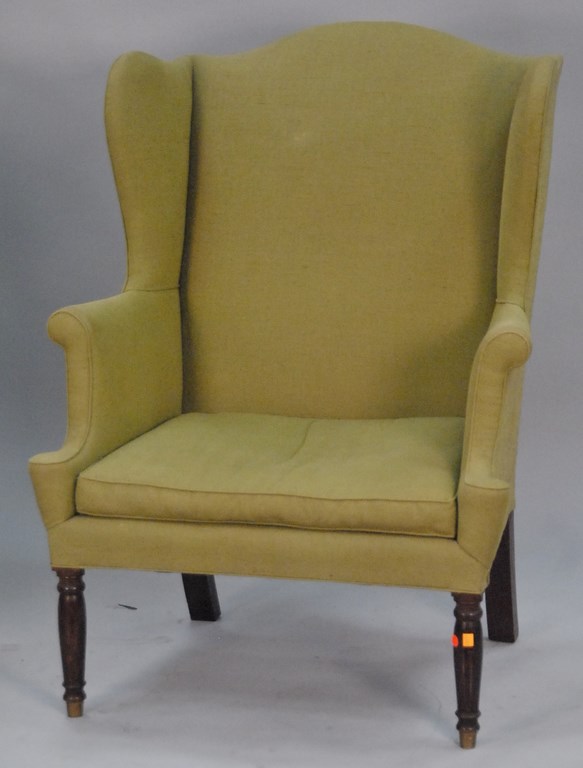 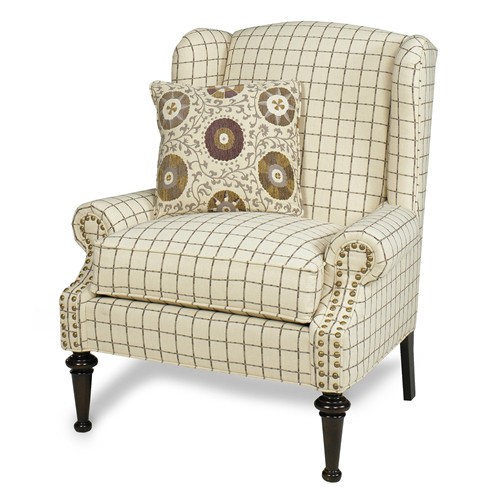 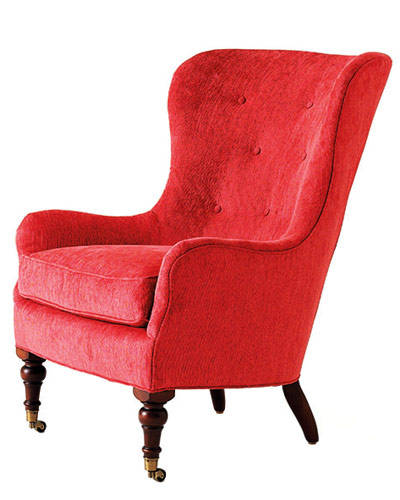 I decided very early on that if I was going to keep this chair, I wasn't going to spend much money on it. The new legs were made from scraps of cherry that I had on hand, and the chair was upholstered in a plain grey upholstery fabric that I had bought over 10 years ago for another project that never got done (the two previous sofa chairs I threw away when I redid the antique settee).

The new legs were done in a fairly simple, yet traditional style. 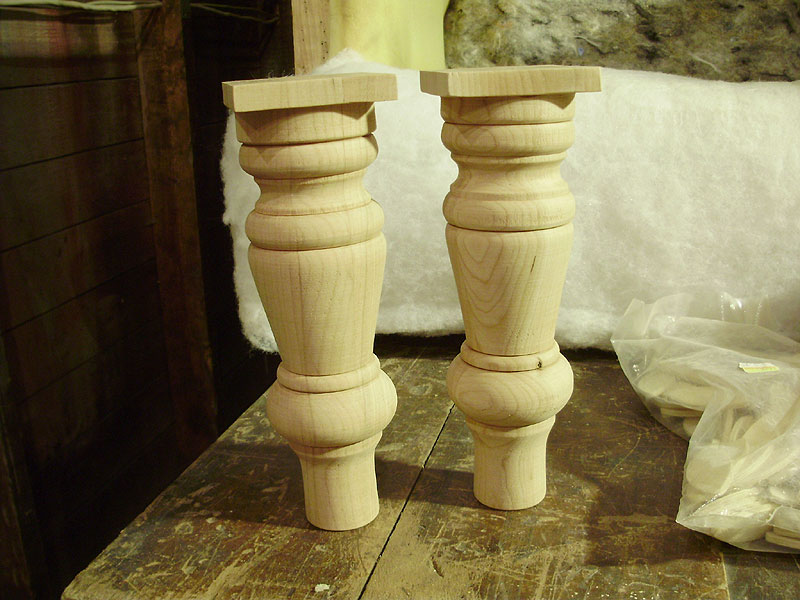 Since the legs on a chair are usually built right into the frame of the chair (for strength), these had to be tacked-on and held with large dowels and biscuits. Since the fastening method is a bit weaker, I decided to add stretcher bars in between. Normally, higher end and older chairs have these stretchers. I'm not really a fan of the stretchers, but they were needed for strength.

Also notice that the bottom curve was removed from the front rail, and a taller back centre board was added (I didn't like the flat back). I finished working on the frame and finishing the legs just about a month ago. 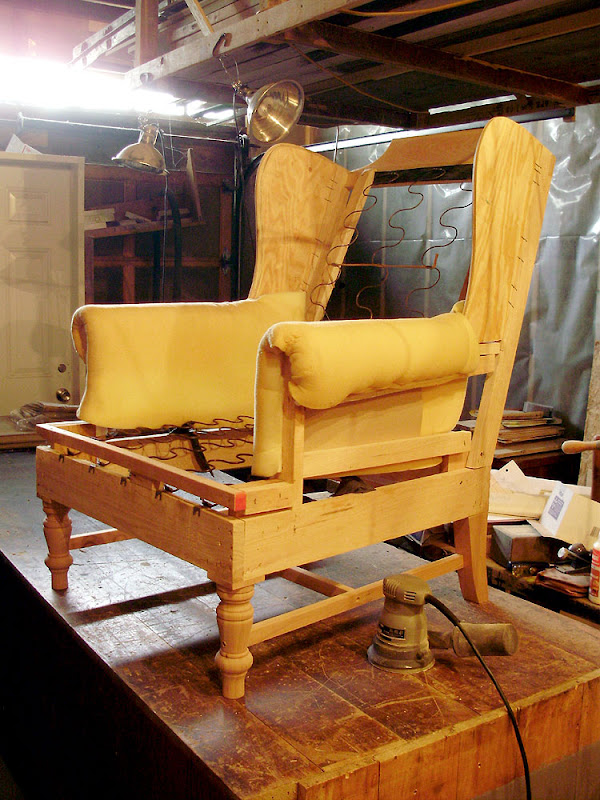 The chair was brought into the shop a few weeks ago, and I reupholstered it. 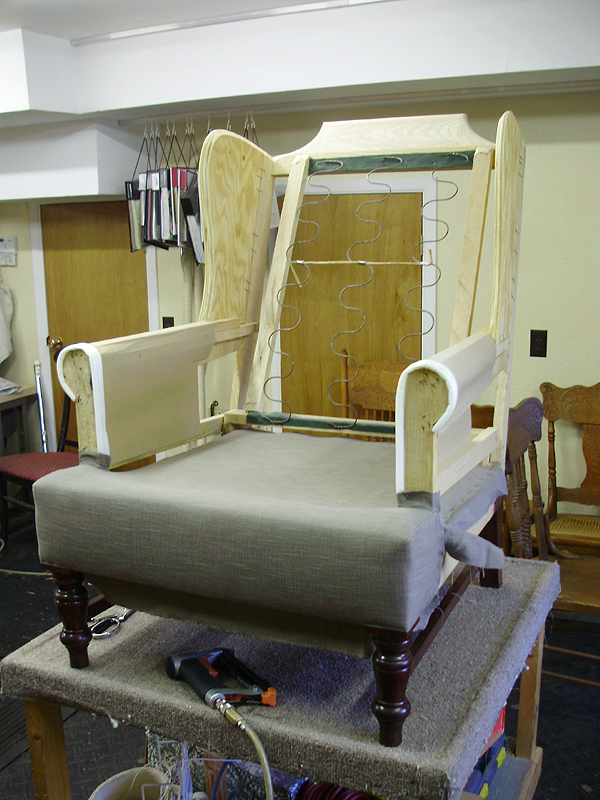 I changed all the foam on the chair. The arms had gotten too soft, the back was no longer the original pillow type, and the seat cushion was worn (and very cruddy). 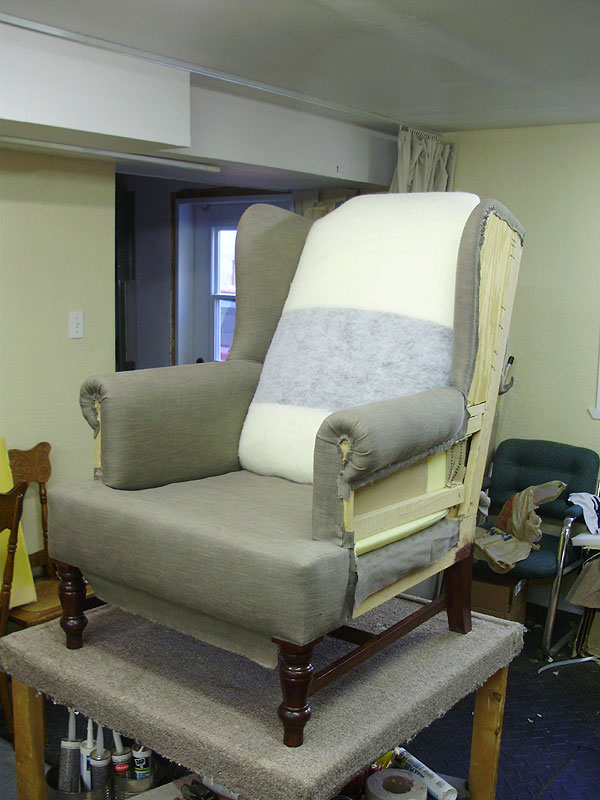 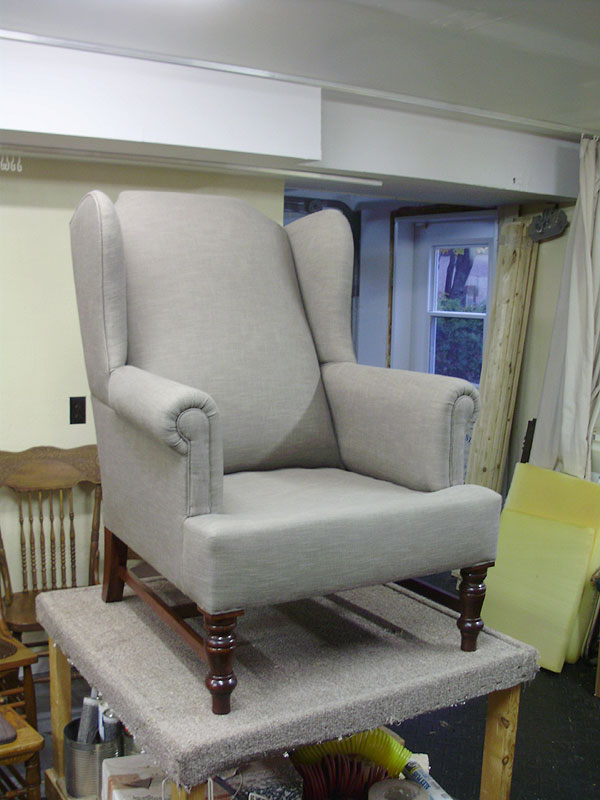 The finished chair has nail-head detail around the legs. It's an extremely comfortable chair. Combined with the ottoman I did a while back (which matches the sofa cushions) it's just fantastic to sit in. I got the chair home just a few days ago. 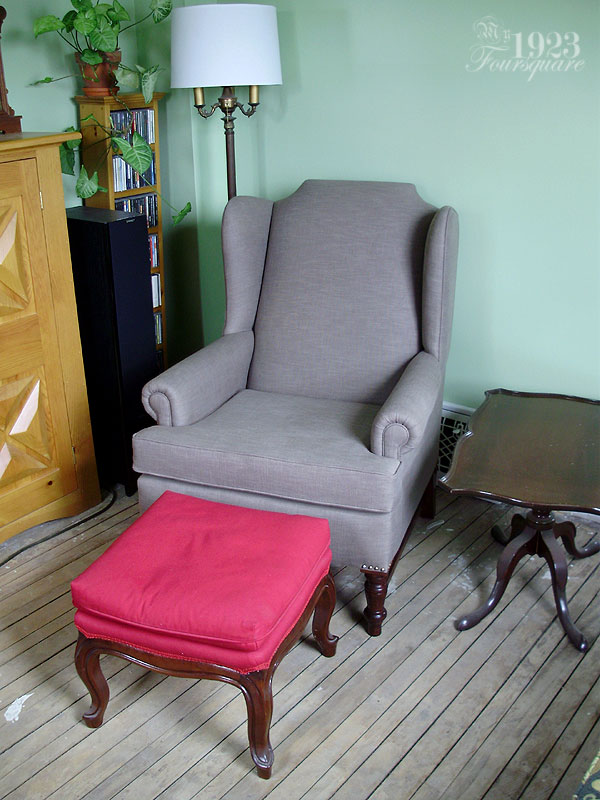 I'm very happy with how it turned out. The fabric choice is a bit boring, but it works well in the room, and it was basically free. The chair does take up a fairly large amount of floor space in the small living room, so for now it's in this corner. It's hard to believe it's the same chair, and hopefully this gives you some ideas if you're thinking of having a piece of furniture redone. I often tell people that you're better off redoing an old sofa than buying a new one. Once it has new cushions, and fresh fabric, you're left with a beautiful piece that isn't shoddily thrown together like what you find today. Most of the newer frames I've worked on were garbage, and I'd say anything older than 1980s is good. This particular chair is probably 1990s, and just starting to drift into "modern junk" territory. 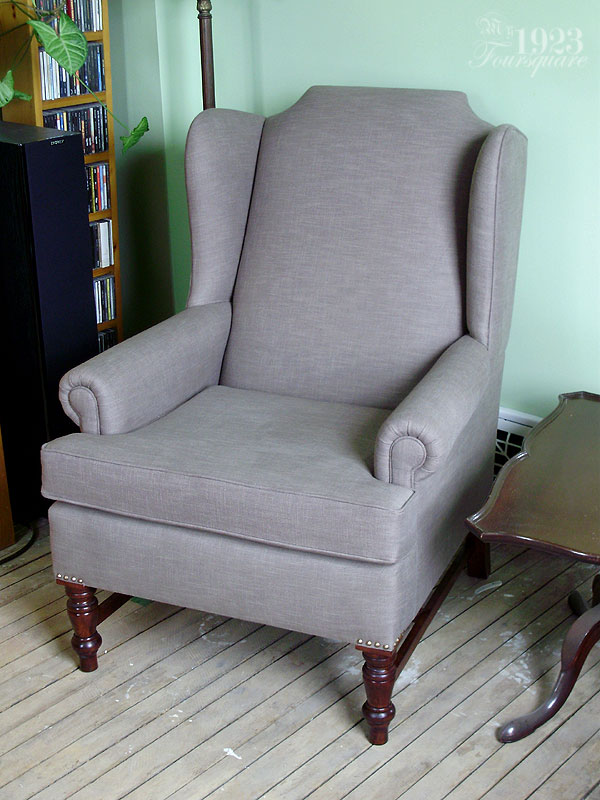 This year's costume was a cheapie. I'm pretty broke at the moment, so I only spent 5$ on this costume (the price of a plain red t-shirt from Wal-Mart). I went as Peter Parker, or "Spiderman in disguise". 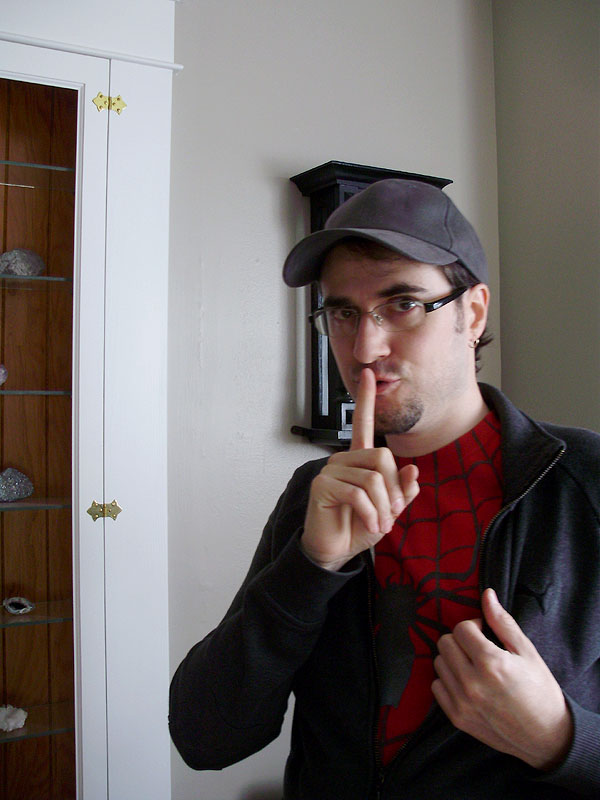 The shirt was done using some quick sketches, freezer paper, an iron, and spray paint. For those who don't know, freezer paper (the kind used by butchers and available at most grocery stores) is a fun way to make simple stencils. You simply cut out what you want, and iron it in place. The glossy side of the paper melts and sticks in place creating a perfect stencil for fabrics.

I started with the curved horizontal lines, which were an absolute pain in the ass to line up. 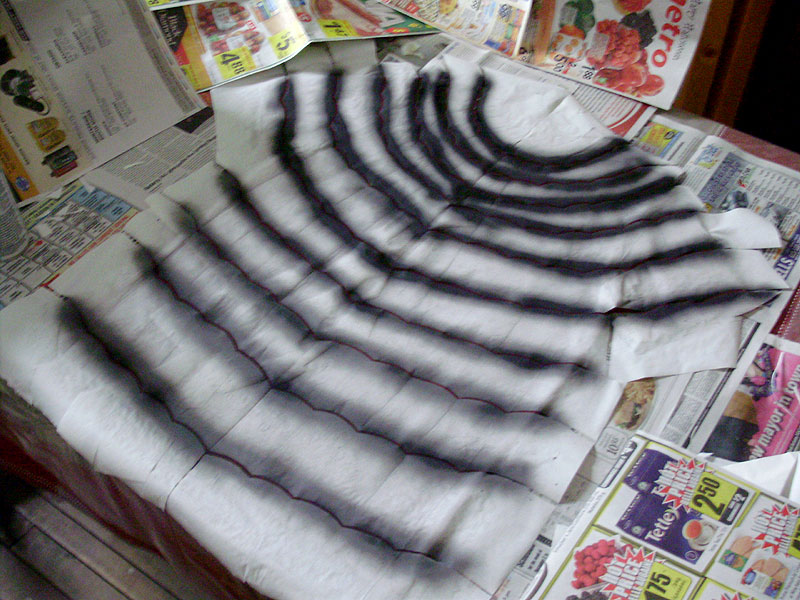 The verticals were much easier, but they were also made up of hundreds of pieces. Largely thin strips, followed by tons of little bits to fill-in all the gaps. 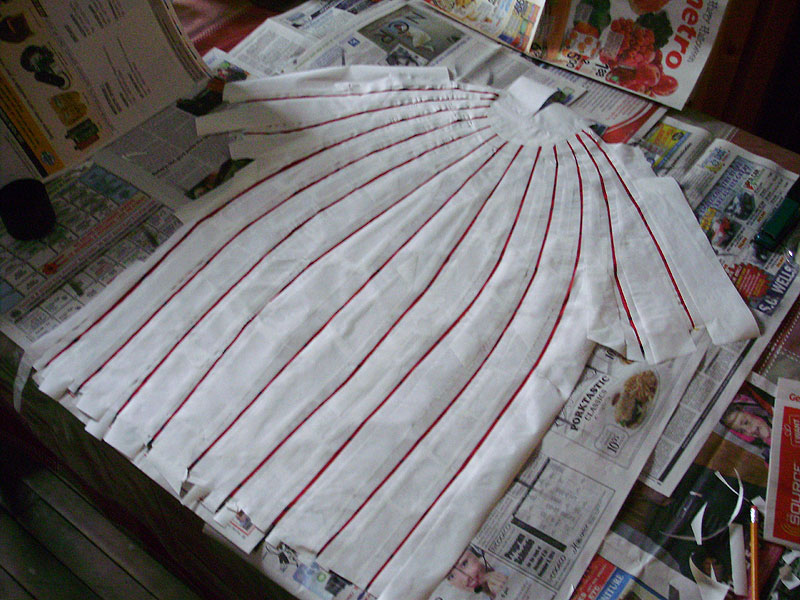 The spider was fun. It's a mirror image, so I just quickly sketched out one half, cut it, then stuck it down. 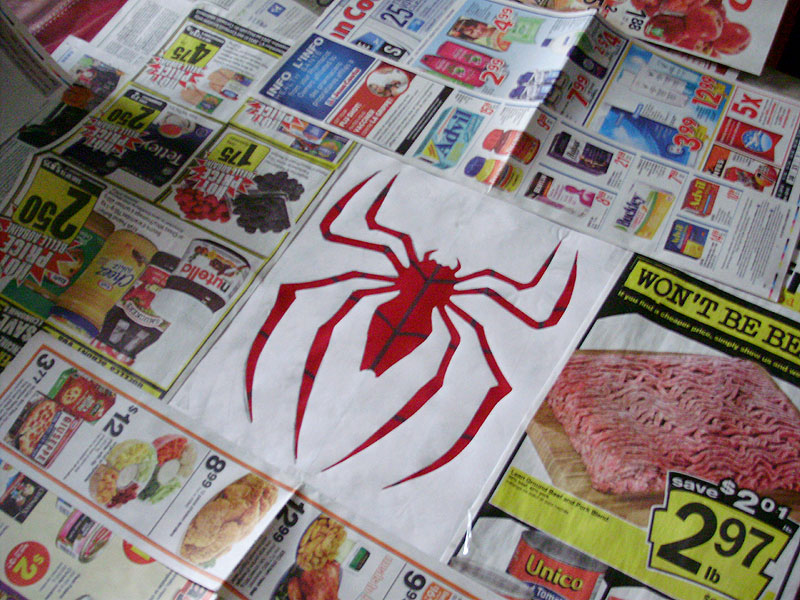 Despite several coats of black on the spider, it didn't completely hide the web lines. The shirt still turned out really well though. I mentioned to several people that I had made the shirt, but no one really took me seriously until they saw the "making of" photos on my Facebook page. 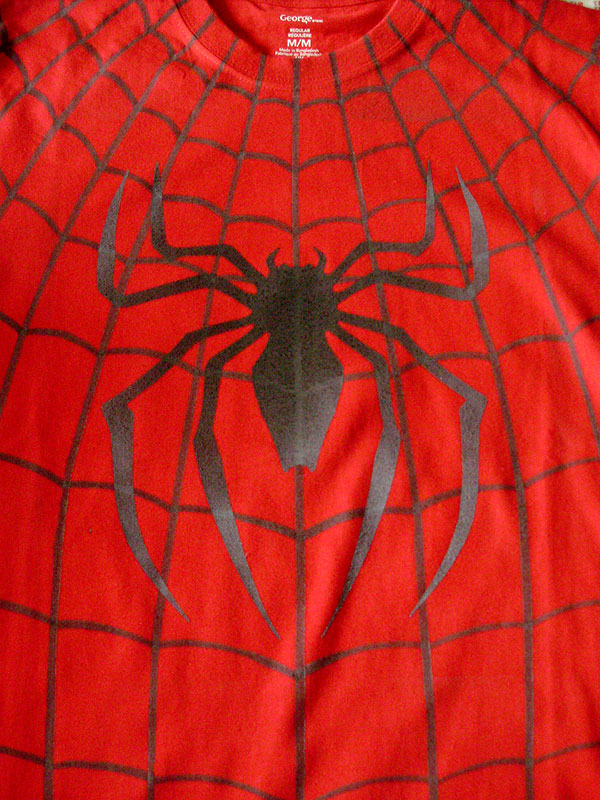 I'll conclude by saying that I had a record number of trick-or-treaters this year. I normally buy for roughly 40-50 kids, but this year I had enough for 50, and I ran out completely within an hour! I started to get kids at around 5:50pm, and by 6:30 I was completely out. I had to be gone for the party by 7pm, but normally if I'm home for the evening, I keep handing out candy until 7 or 8pm.
Posted by JC at 2:31 am 7 comments: