On days 11 and 12, not a whole lot was done on the house. We did some more demolition (removing the tongue-and-groove under the electrical panel, as well as removing some more of the non-matching mouldings). More work was done on electrical, and a lot of times was spent troubleshooting a connection in the junction box controlling the 3-way switch to the main staircase (the one in the attic).

Here are some photos of the skim-coated walls after they had dried. 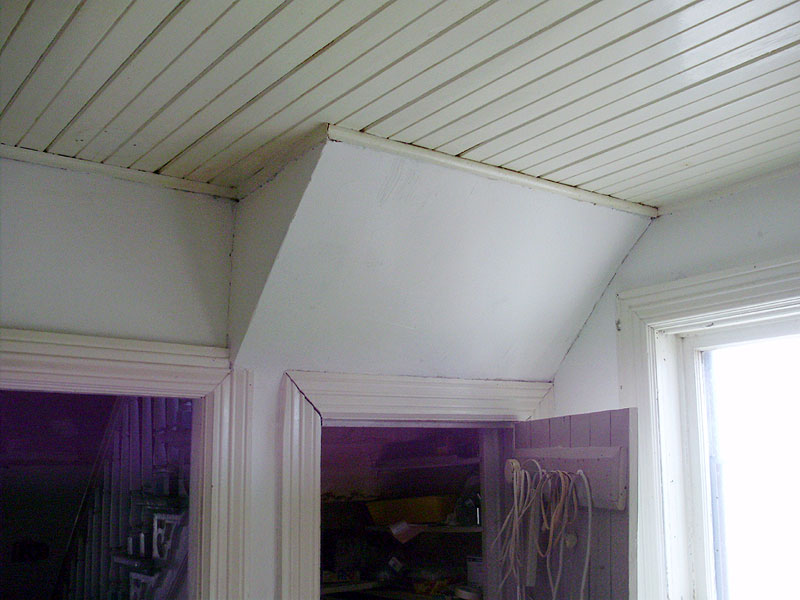 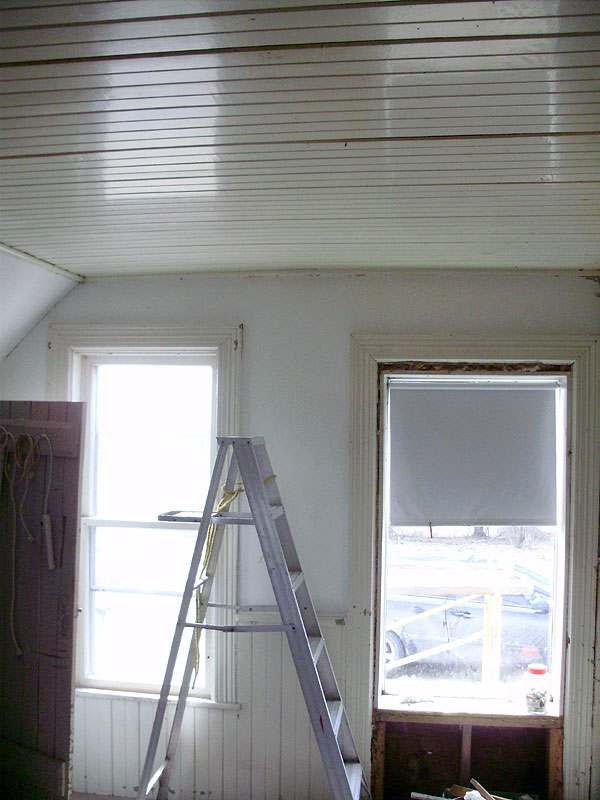 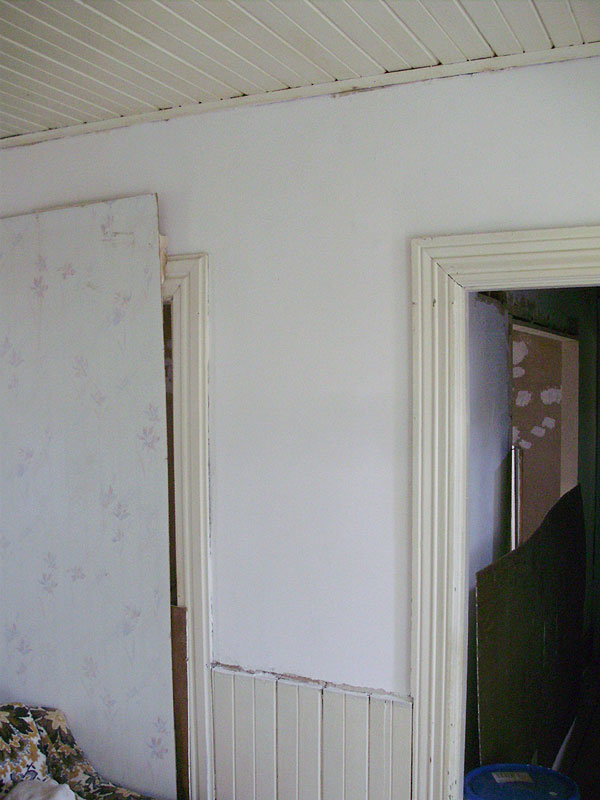 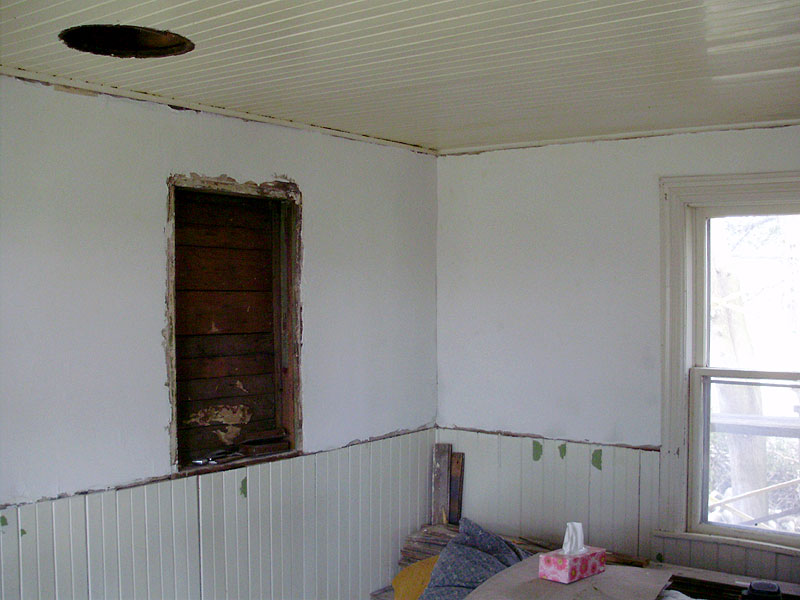 Here's the old wallpaper found under the non-matching mouldings on the living room side. It's a similar hand-printed wallpaper to the pink ones on the reverse. It dates to AT LEAST the early 1920s, but it's probably much older than that. 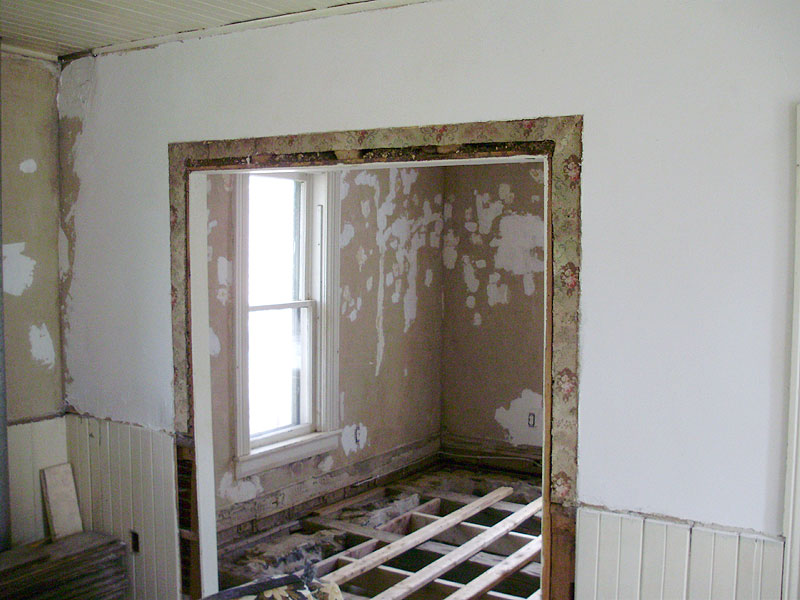 I like the colours in this one. Off white, green, dark pink... 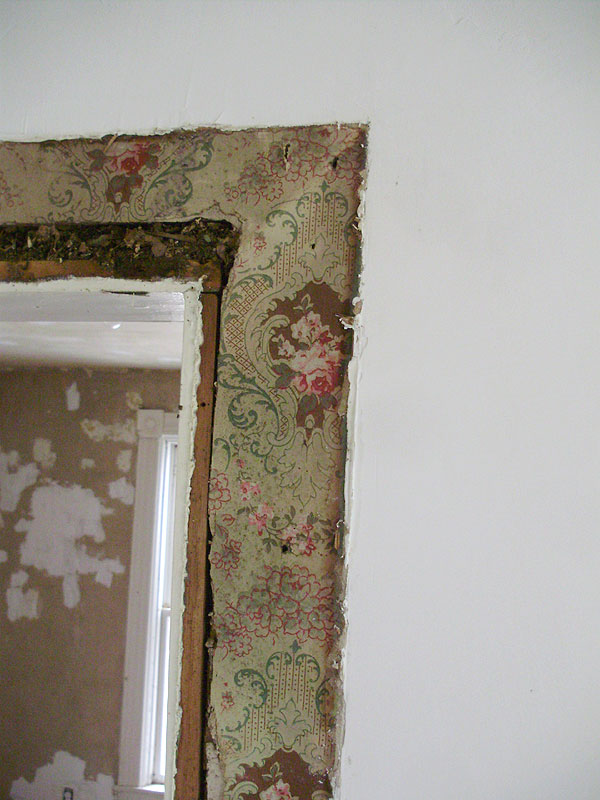 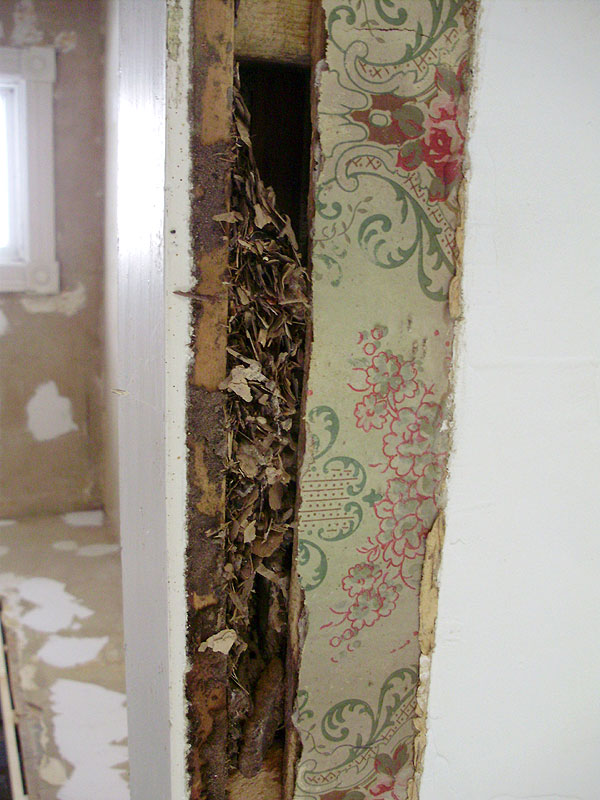 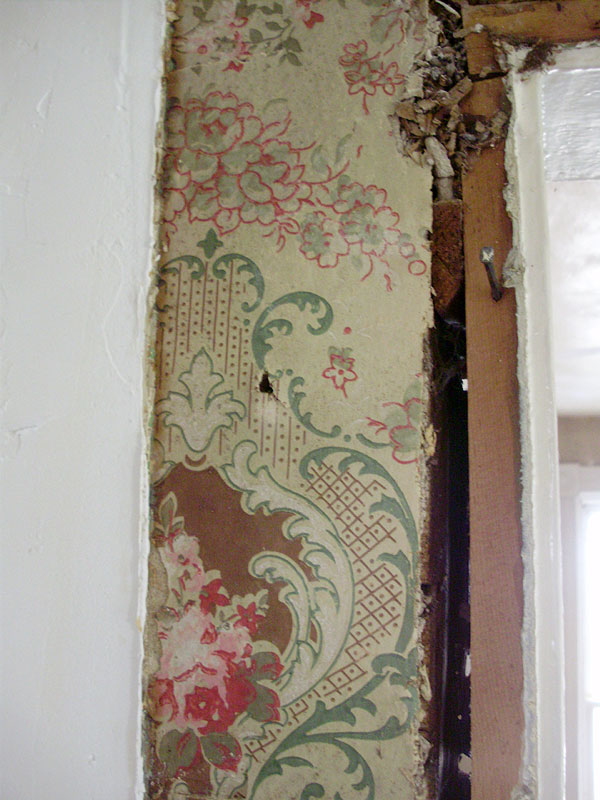 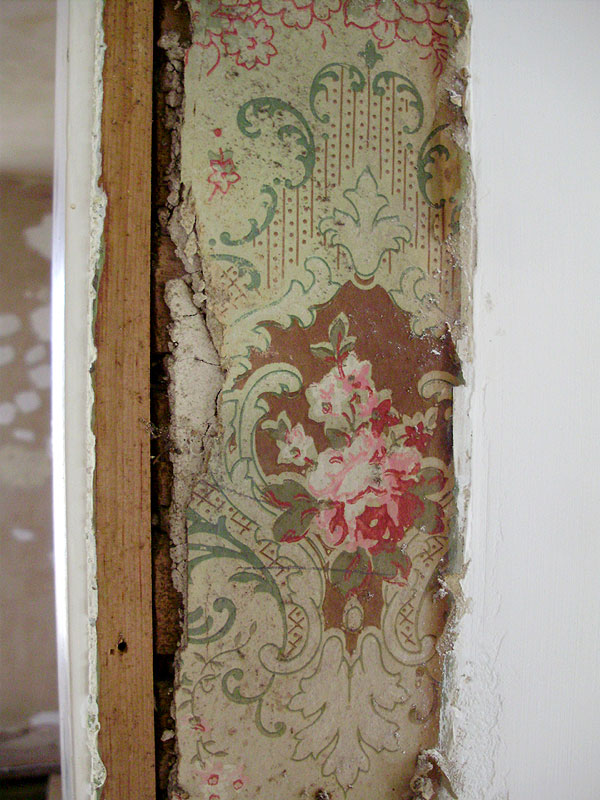 So after the long break (3 weeks?) I was told that there were some... developments... that happened while I was away, and that I probably wouldn't be too happy about them. Apparently while we were gone, and with NO ONE ASKING ANY OF US, the "foundation guy" convinced the parents that the boards we pulled-up from the floor should be planed down rather than be sanded in place. The guy claimed that these kinds of floors can't be sanded with a normal floor sander, which is complete b/s and makes absolutely no sense. This guy has worked on historic homes, so I guess the parents didn't question him too much, but I would NEVER EVER have run them through a planer*. So anyhow, all the boards were given a light pass through a planer, and when Angie found out what they did, she had a complete freak-out and meltdown (and I don't blame her one bit). Apparently there was a lot of screaming and cursing involved. I only found out about all of this on the car ride up to the house.

So yeah, not only did they plane the boards, but apparently all my carefully marked and numbered stickers got messed up because they started planing them not even bothering to check anything. This is the part that irritates me the most, since the floor HAD to be re-laid in exactly the same way (because of heating vents, and warped areas), and the numbers were largely the only indication of how to reinstall them correctly.

So yeah, I wasn't thrilled. They also "goofed" a few of them by passing them upside down, so a few were now too thin on the bottom, which gave us a lot of trouble.

The new roof was also installed when I saw the house after the break. 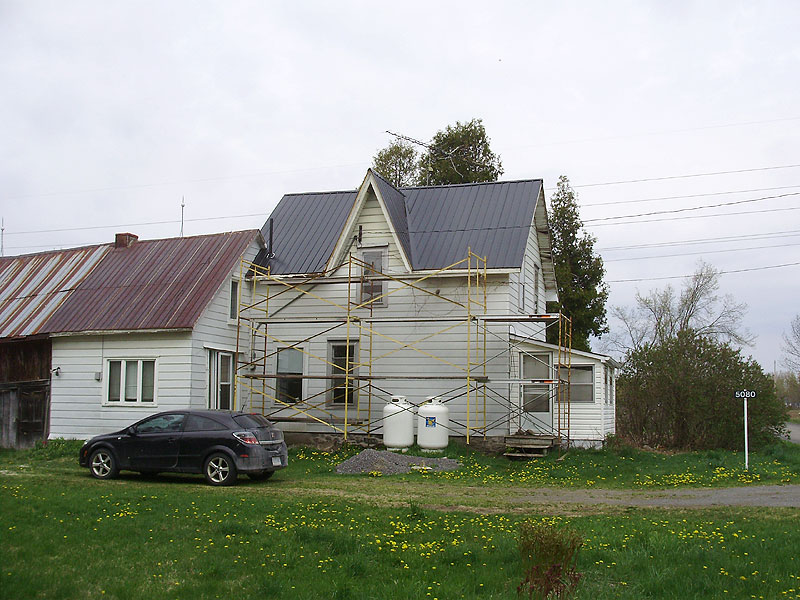 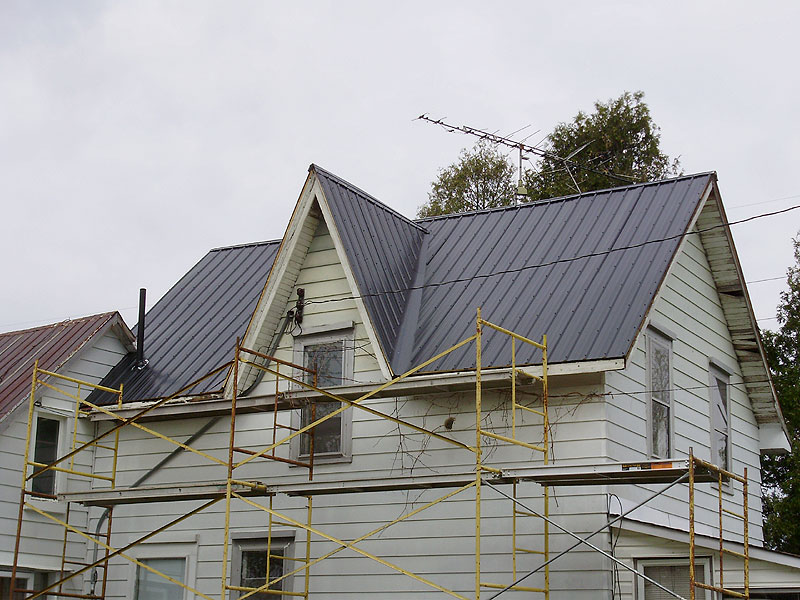 The rotted beam under the window was also patched (the one where you could see outside). 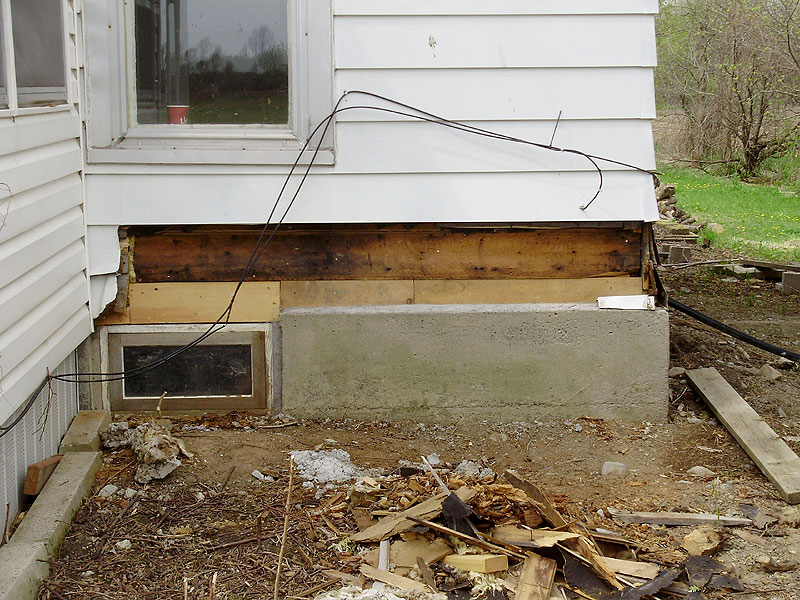 Angie's father also fixed the top of the chimney. 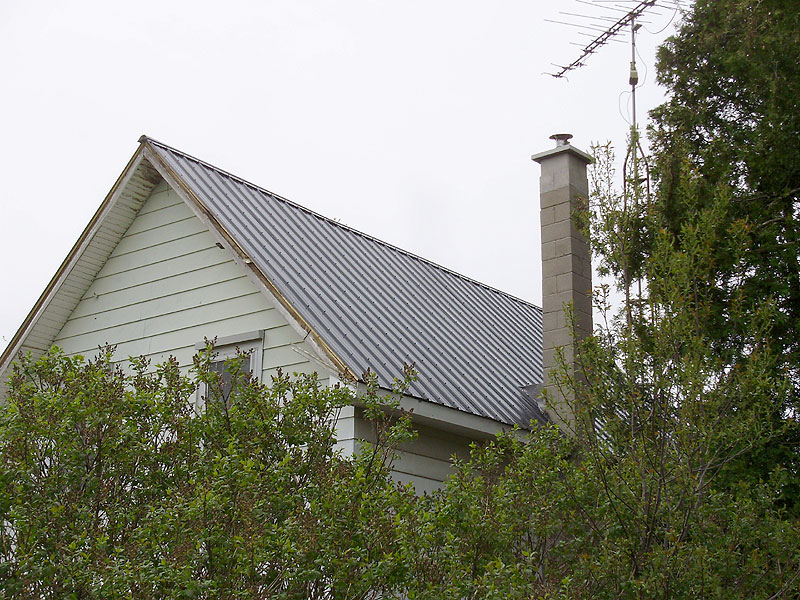 There were numerous different tulips in the side bed. 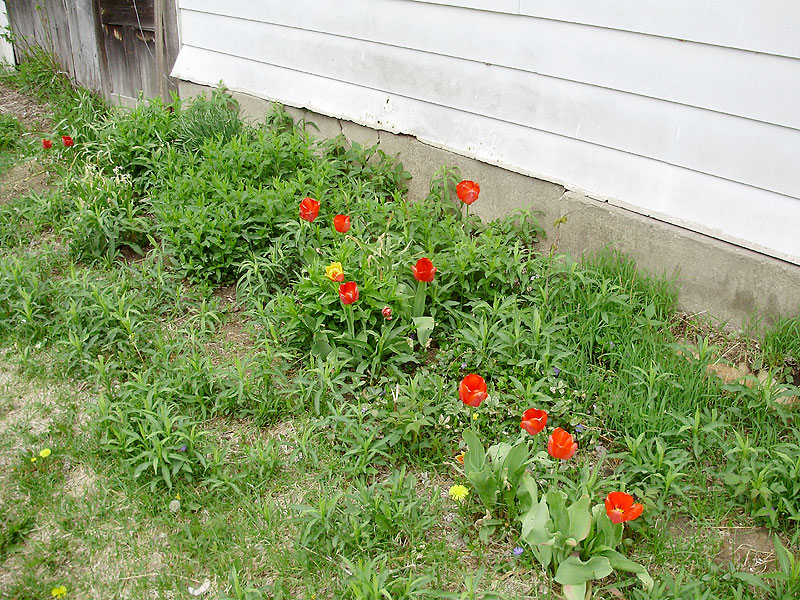 So yeah, the floor. I was definitely not happy about the whole numbering issue (most had thankfully been re-labeled correctly, but a few had question marks on them), and I was really not happy that the planer seems to have really raised a lot of flakes and coarse texture in the boards. It also ripped out and ate a number of the knots in the boards, leaving us with a bunch of large holes. The guy must have really messed-up his planer knives, too, because at least 3 or 4 huge nails were hit (we removed all the ones we could, but didn't worry too much about them, since they weren't supposed to be passing through a planer!)

Re-laying the floor was kind of grueling. I think we had about 3 boards out of 16 lengths that went in really easily. Most of the others went in very painstakingly. We had to use a combination of tapping with hammers (against blocks), pulling, pushing, and using large 4 foot pipe clamps that I brought for the purpose. 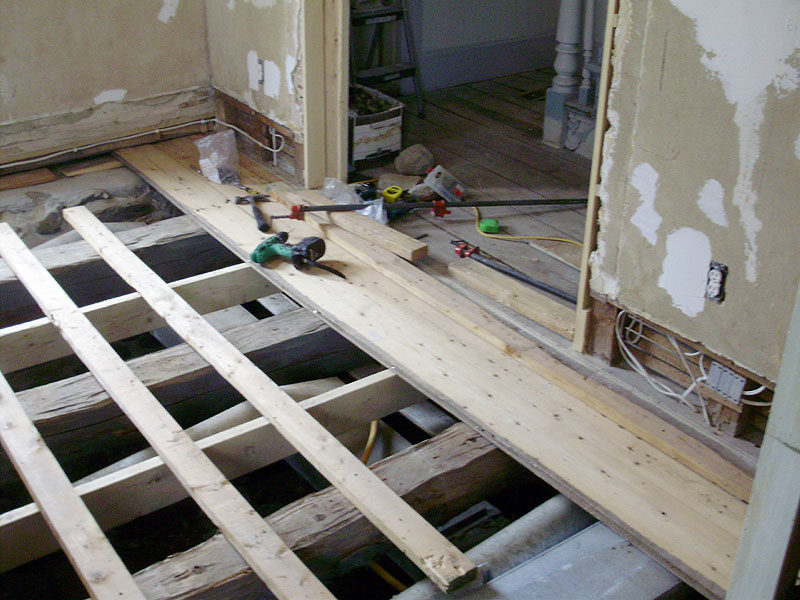 The whole pile of planed boards... 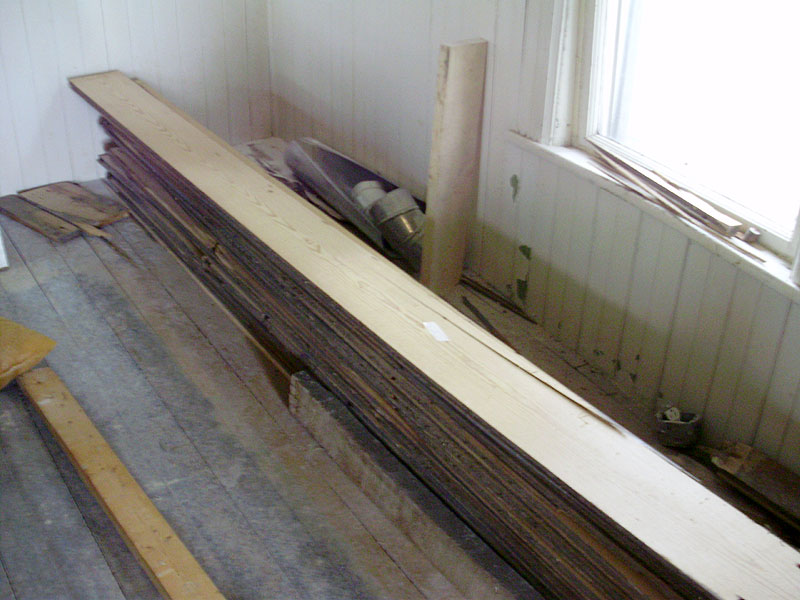 Here's how I squared-up the living room archway flooring. If you recall from the last post, this flooring edge was really crooked. We wanted a nice clean transition, so I screwed a piece of thin plywood along the archway (passing the screws in between floor boards to avoid making visible holes), and then I used a router with a flush-cut bit (3/4") mounted in it. The plywood serves as the straight-edge for the base plate of the router. This works really well, but it makes a LOT of dust.

The ends were cut with the multi-tool. 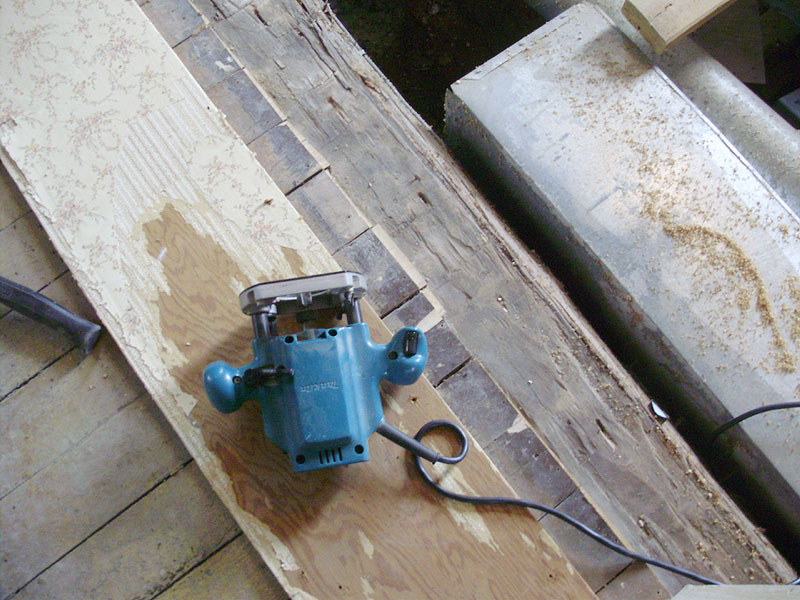 The flooring on this part appears to be solid maple, and 1 1/4" thick, so I had to do multiple passes. You can see what's being cut off. 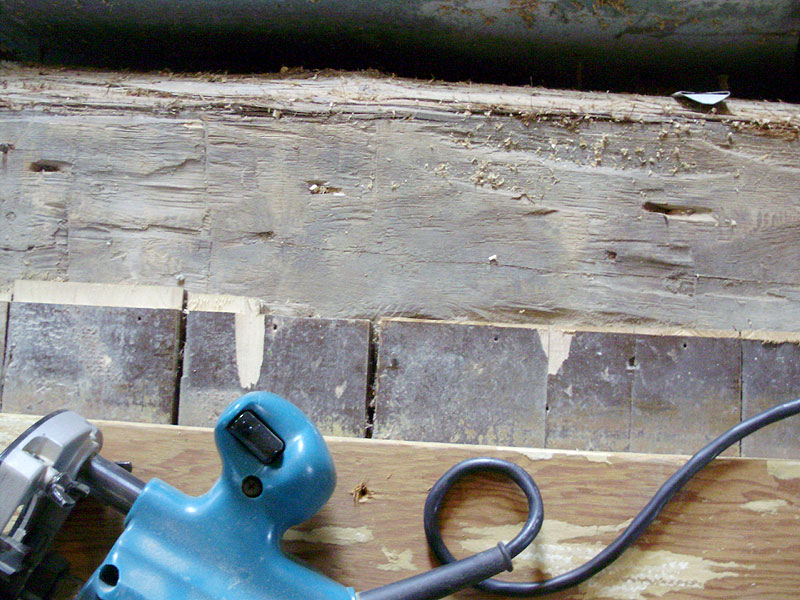 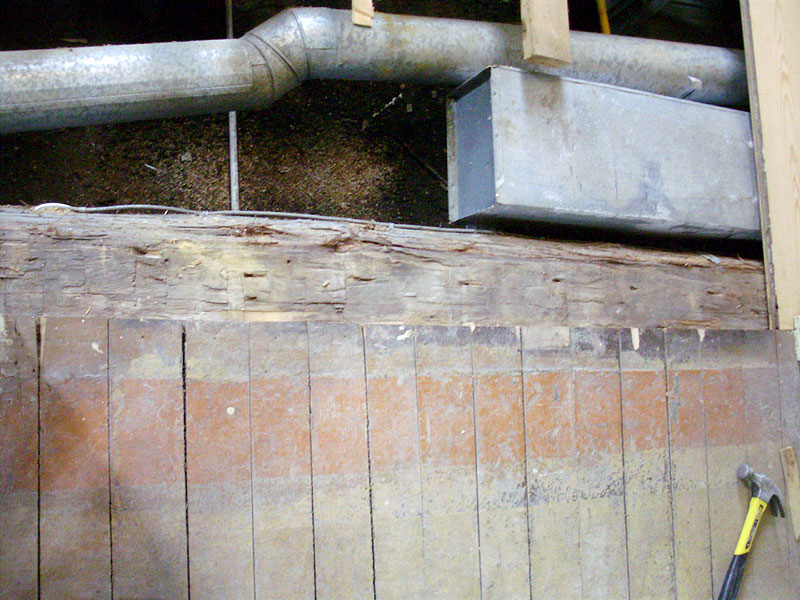 Each board took at least 1/2 hour to install. 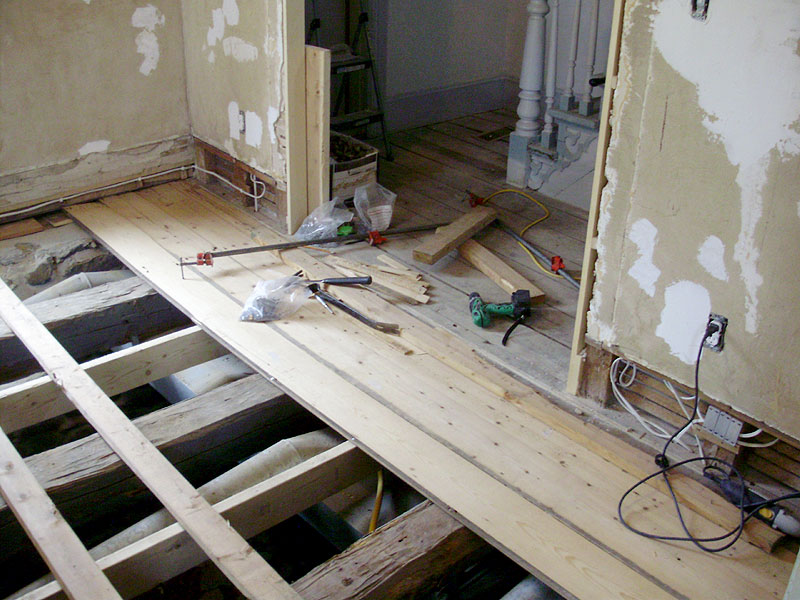 To add to the disappointment, the patch he hid was about an inch too high across most of the patch. The poor guy meant well, but it ended up making a lot more work for us. Pierre and I spent a good 2 hours chipping away all the top inch of cement, and then filling-in all the holes in the side wall with crushed gravel and sand (not ideal, but better than nothing). 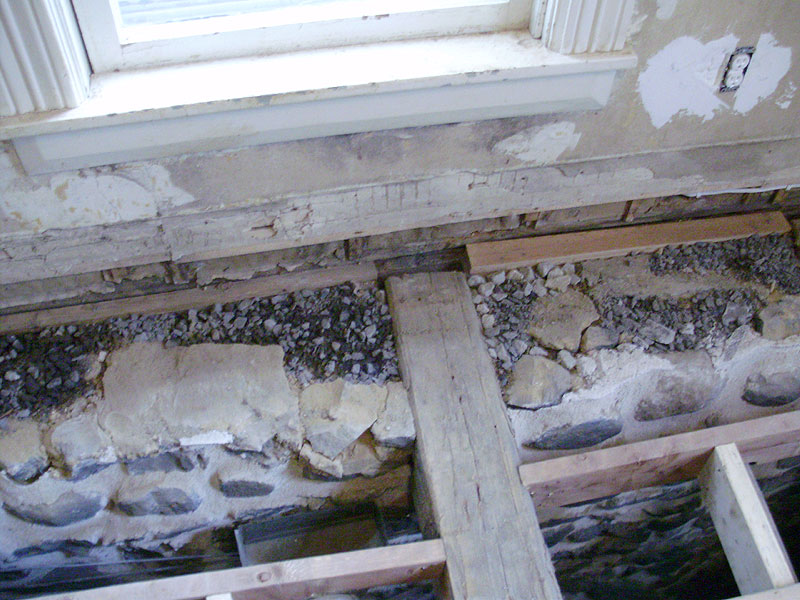 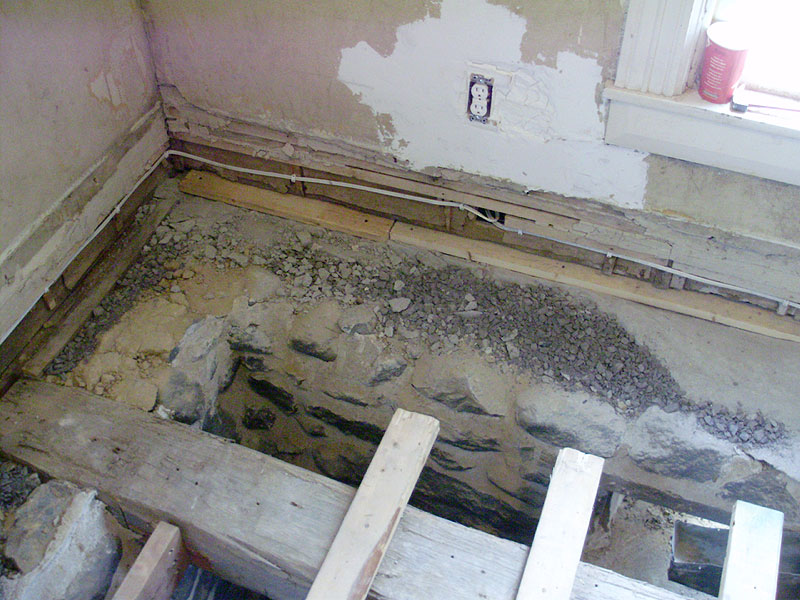 The new beam repair (to replace the rotted section) was also not deep enough, and not the same height, so we had to redo all of our shims and blocks along the edge, which ate-up even more time. 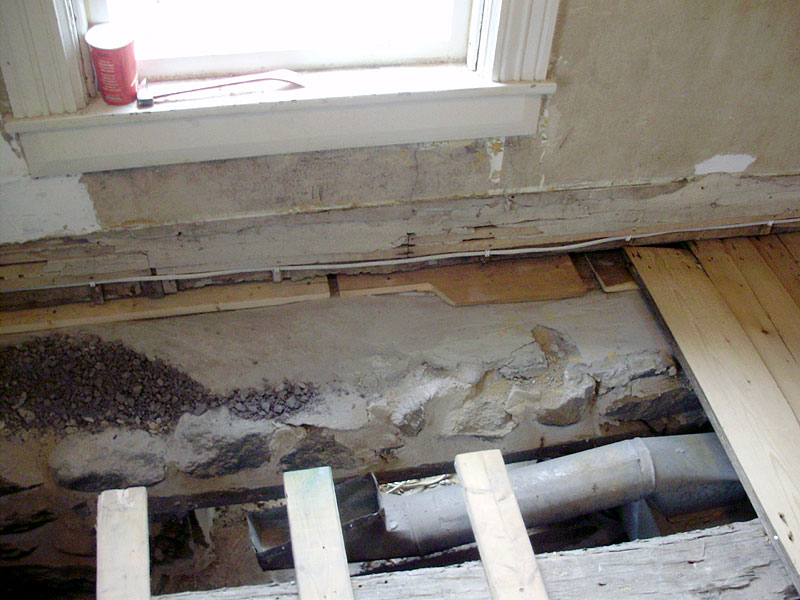 Installing 3/4 of the floor (what you see below) took the entire day. Because of all the screwed-up boards, several of them had to be shimmed on the bottom, and a bunch were very difficult to slip back into their grooves.

You will also note that several of the boards had cracked (either from age, or from us removing them), so each of those had to be carefully reglued. We also had to trim all the boards to length. This was either because the "nice edge" was crooked, or because they were now too long to slip back under the edge of the wall. 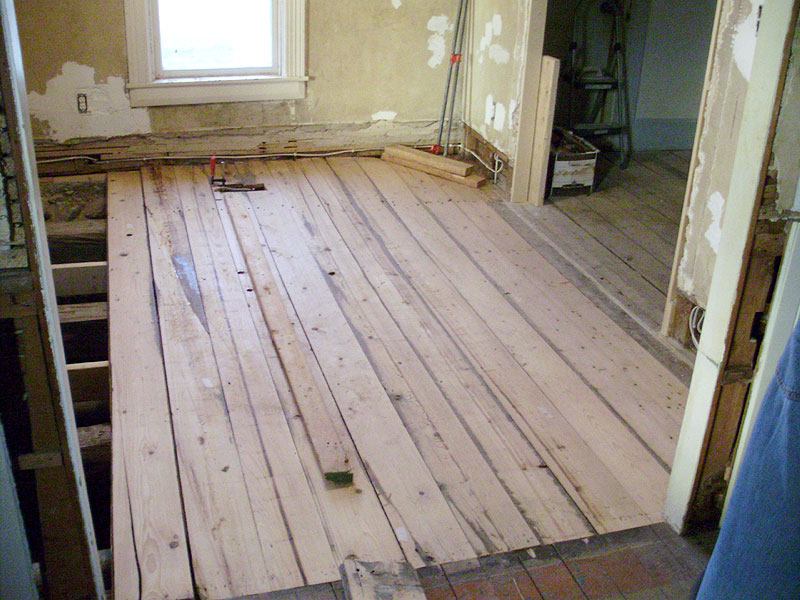 In the end, however, the floor turned out looking really good. The majority of all the gaps are now either tight, or with a maximum gap of around 1/8" (with most being no more than 1/16"). 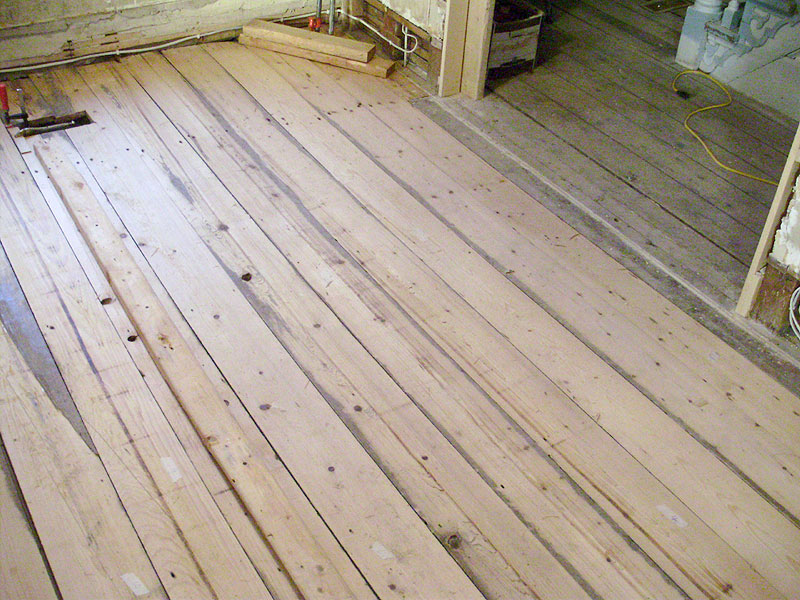 Here's the transition edge. The line looks great, the only problem is that now there's about a 1/16" to 1/8" drop between the two floors because of the planing. This will be difficult to fix, especially with the other floor being solid hardwood. 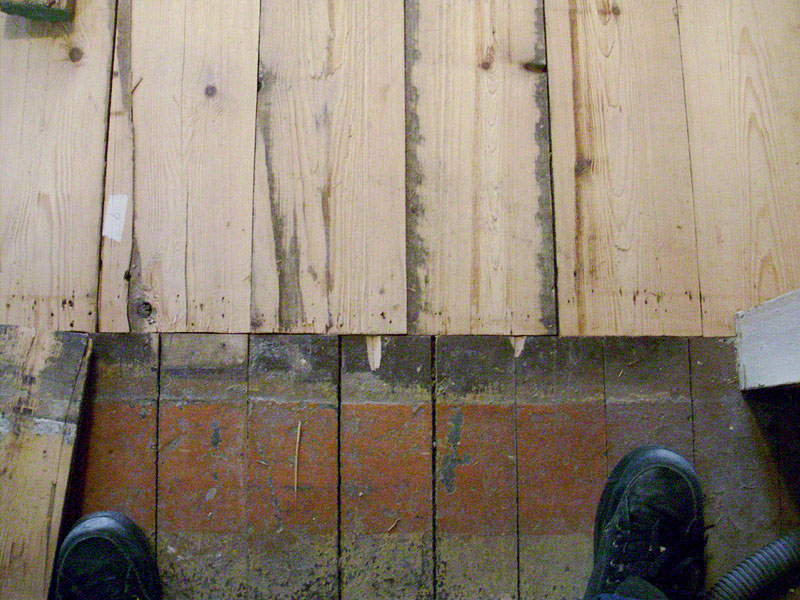 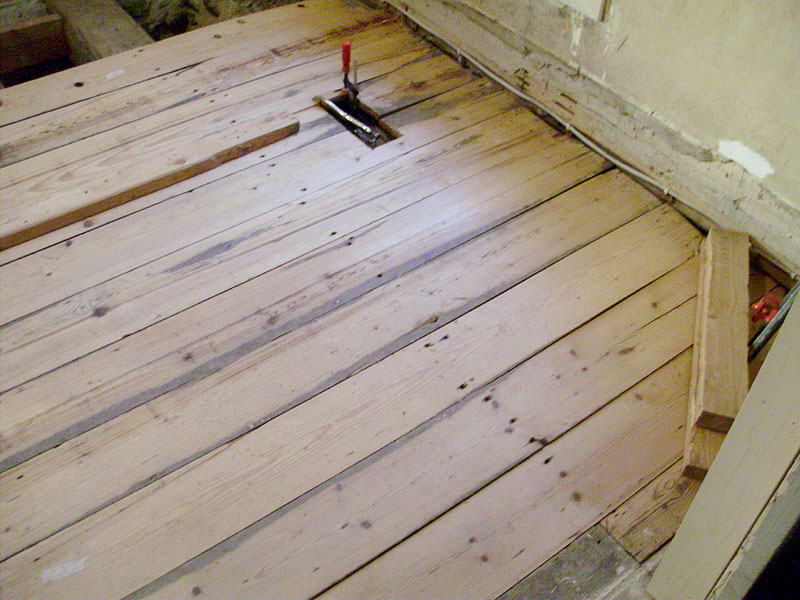 While I was away, Pierre also did a bit of work himself, namely all the sanding in the hallway to remove all the textured gesso work on the wall going up the stairs. He did this using a power sander and 80 grit paper. This made a LOT of dust and he worked on this while no one else was in the house (and obviously wearing a mask).

He also patched all the holes in the wall and smoothed everything out. 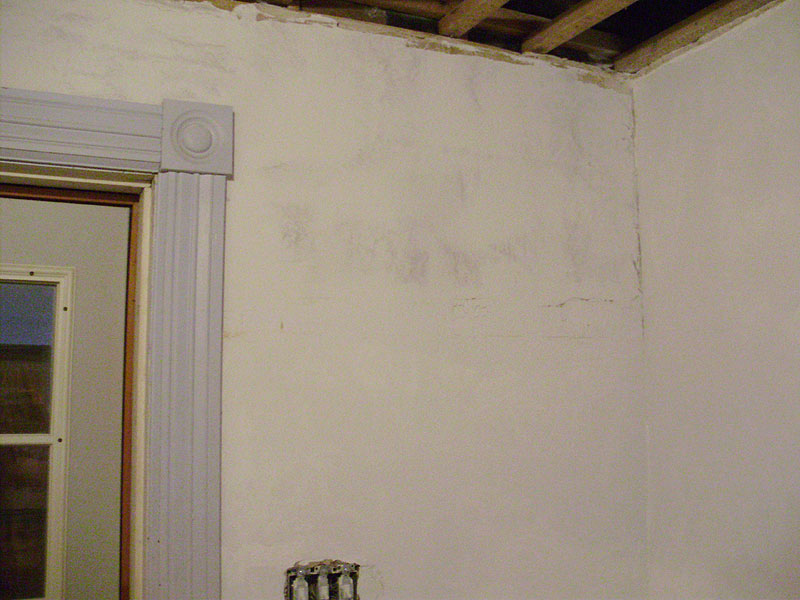 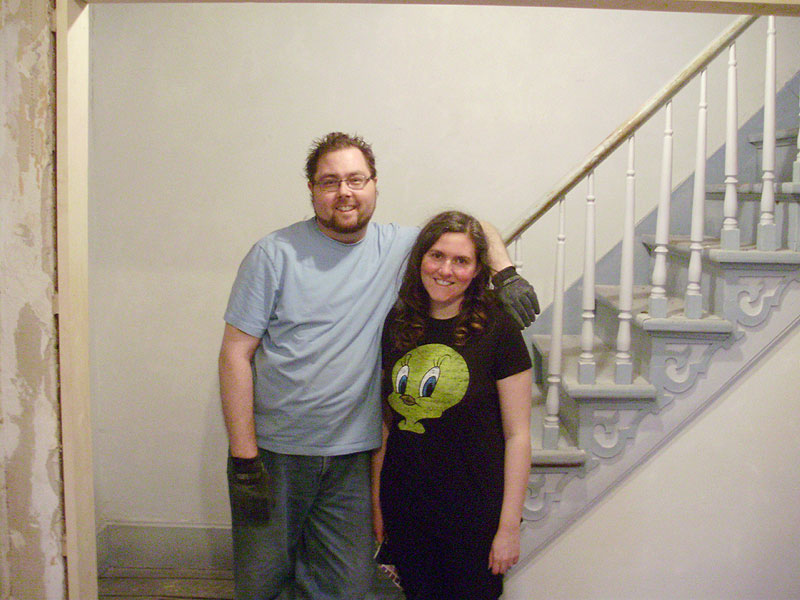 * For those who might want more details about my reasoning VS his in regards to the floor, here's a bit more of my thoughts. First of all, this is an antique floor. It's old wood, it's very dry, it's damaged, and it has nails in it. It's also warped and bent in a lot of places because of how it's been installed and in place for about 140-150 years. One of the boards had bend in it that was about a 2" curve over a 2 foot span. When you pass something this fragile through a machine like a planer, there's a good amount of risk involved. The wood could chip badly, the wood could jam in the machine and leave a deep mark, and there are other issues like the loose knots being yanked out of their holes and chewed up by the machine. One of the other major problems with planing a floor like this is that the boards might not be the same thickness across the surface. The boards could be thicker near the edges of the room, and thinner in the centre, they were sanded in place, so it's impossible to tell exactly how everything will line up after it's laid back down. One of the problems we had when we reinstalled it was that come of the boards seemed to now have a sort of trapezoidal profile (one edge seemed thicker or higher than the other. In several spots this left us with the entire edge of a board being about 1/16" higher than the board next to it. The only way to fix this now is to sand down the floor even more. Before the boards were planed, they were around 1 3/16" to 1 1/4" and after that, they came out barely being 1 1/8" on most of them, which means we lost about 1/8" in thickness, which is quite a lot. Now we need to lose another 1/16" to get rid of all the fuck-ups.
Posted by JC at 1:27 am 4 comments: