Learn a bit About Upholstery

I just made an interesting and educational post over on the upholstery (work) blog regarding the different kinds of materials that are used as stuffing in antiques. If you have any kind of interest in upholstery, I would urge you to go have a look.

Lefebvre's Upholstery Blog - My Furniture is Stuffed with WHAT?
Posted by JC at 1:25 pm 1 comment:

I just finished-up the two antique heating grates last night (for the Office and Living Room). The new casting for the missing latch was brought back to me this week, and I painted it over the past few days (primer, followed by black on the back end, then white on the front). And they are now installed and functional again.

The casting ended up being quite expensive (nearly the price of buying an entire salvaged grate), but I had never gotten an actual quote for the casting, and it's over and done now.

I wanted to share photos, but I forgot my camera at work, so I will post those next week.
Posted by JC at 10:00 pm No comments:

Here are the finished photos for the "L" Room, which show the room as it looked when I bought the house in 2010, and now, after a ton of work rebuilding the closet walls, repairing the window mouldings, replacing the missing mouldings for the doors, fixing electrical outlets, fixing the duct work, repairing/patching and repainting the original tongue and groove pine floor, fixing the absolutely terrible ceiling (which had been textured with drywall compound and a broom), etc.

The photos rotate counter-clockwise from the left-hand corner as you walk into the room. 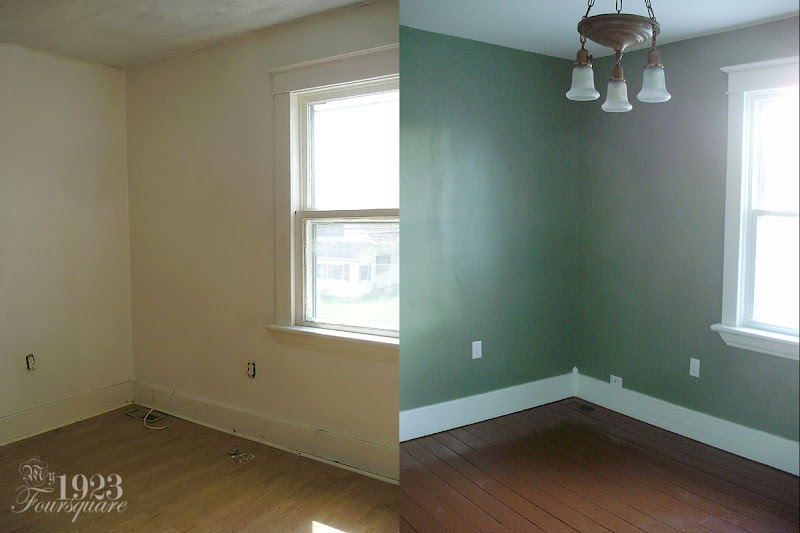 The bookcase was removed because this is the only usable wall without any obstructions (windows or doors). This would be the idea spot to have the headboard of a bed. When the house was originally built this was actually a window, but now there's an attached building on this side. 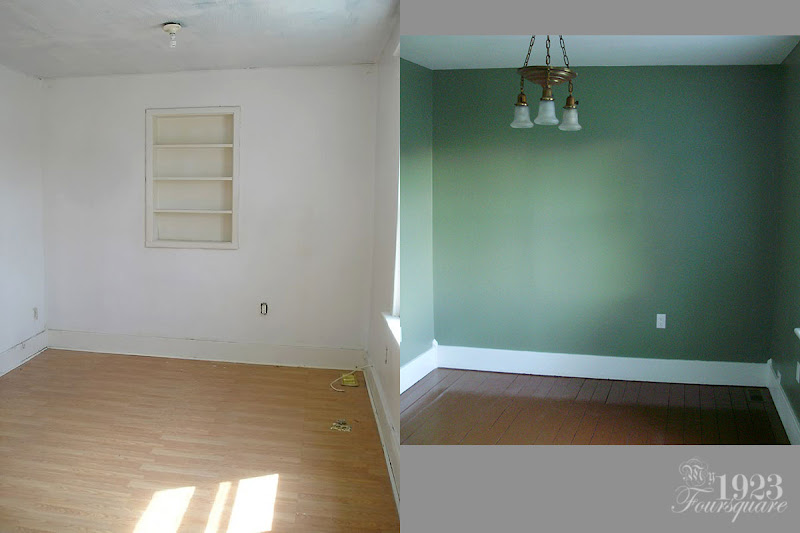 Note: the interior of the closet is still unfinished drywall at the moment. 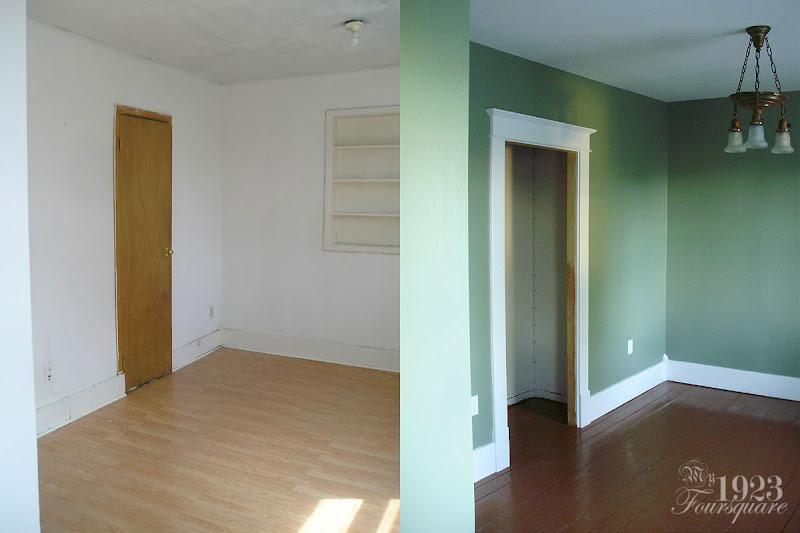 Here you can see where I rebuilt the new wall to land even with this stupid corner that they had (this doorway was not here originally). 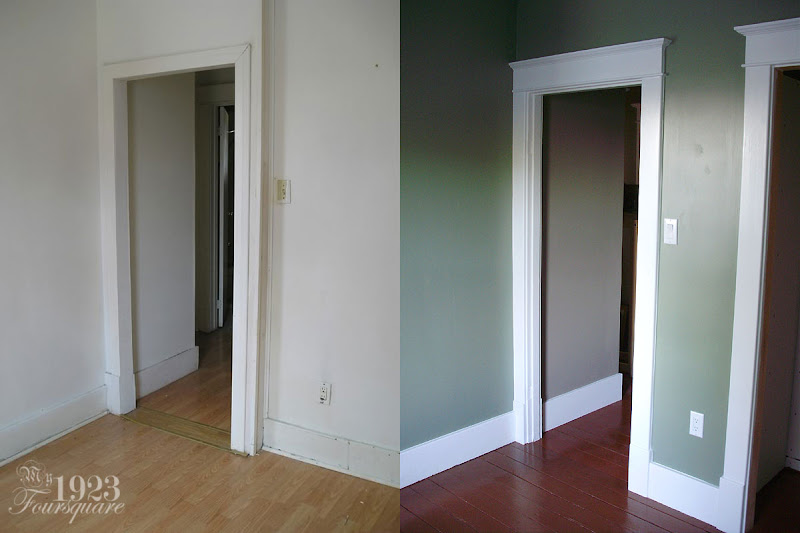 The only drastic change to this corner was the lowering of the outlet, and repairing the sloppily installed baseboards (with 1 missing corner stake). 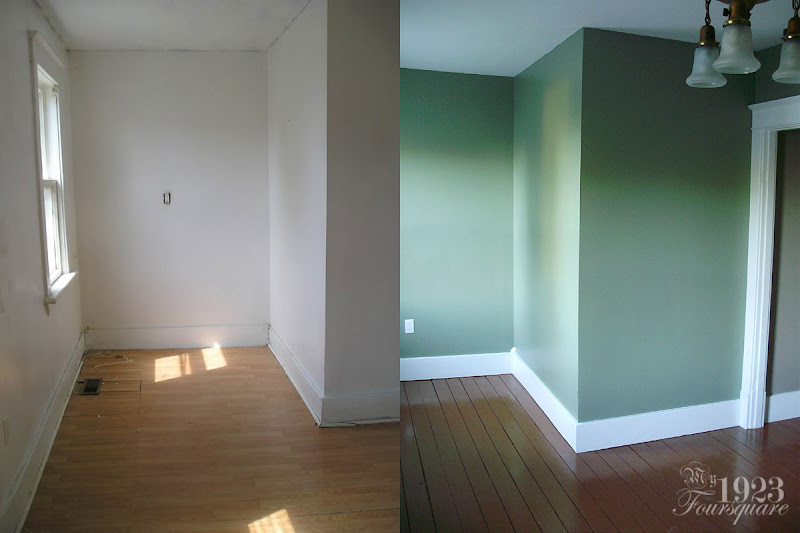 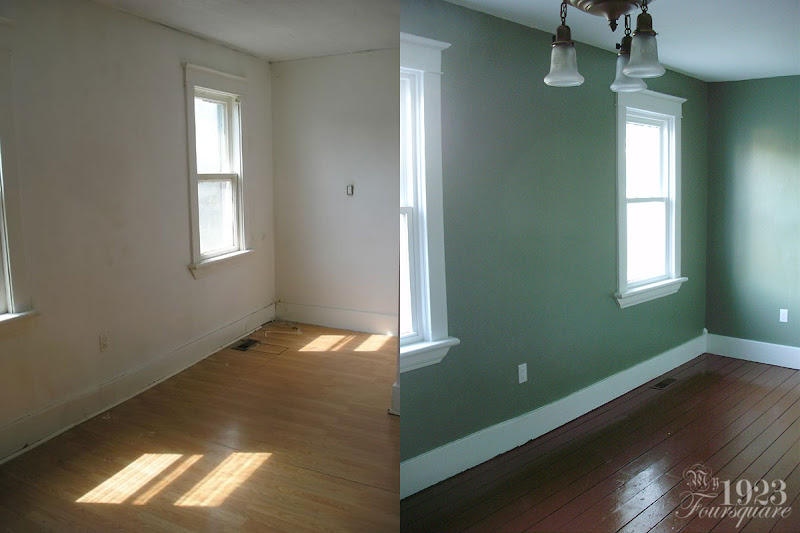 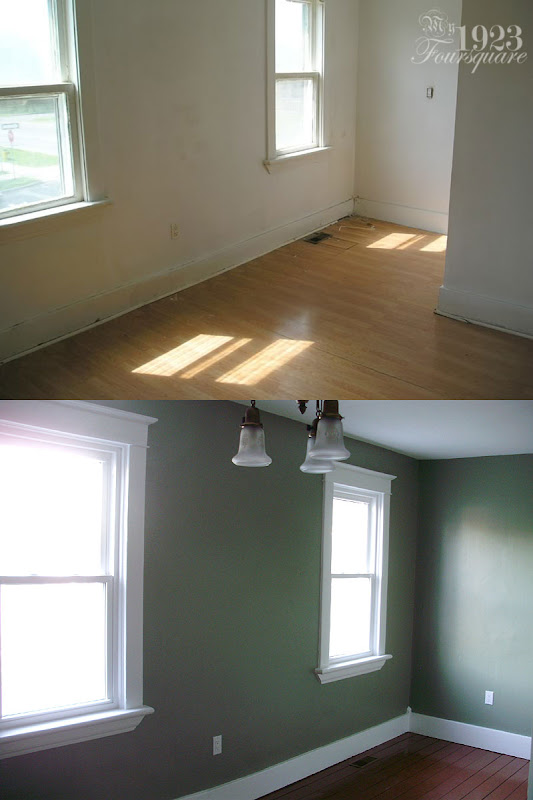 The floor here needed a lot of repairs. A lot of the pine boards are new, and had to be custom made to fit. 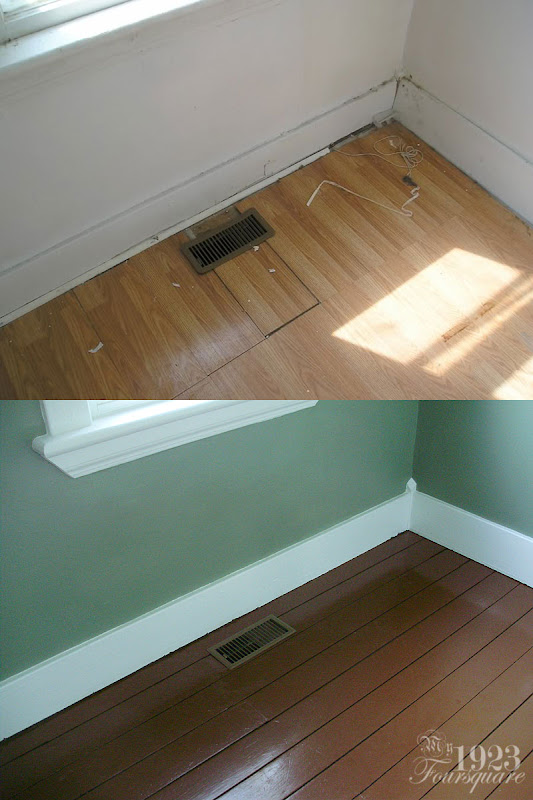 The original closets were only 16" deep, and they had been modified twice in the past. Originally they separated the two east rooms upstairs. At some time in the 40s or 50s they were opened up into a curved archway to make an upstairs kitchen and dining room, with a small broom closet at each end. After this, they were again turned back into one single long closet. I tore everything out and made this back into two closets and a built-in linen closet for the hallway. One closet is larger (the one for this large L shaped room), and the other one (only partially built) will serve the small back room in the north-east corner. 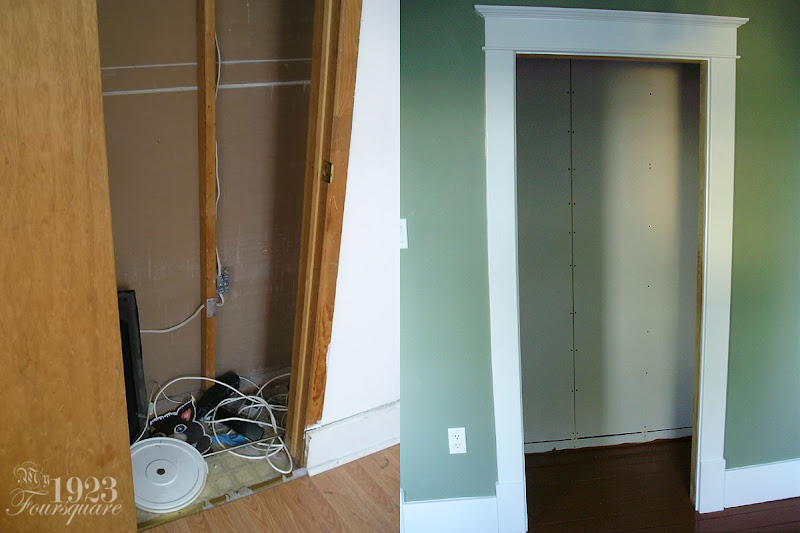 This shows the main doorway, the linen closet in the hallway, and the new closet for the "L" Room. The doorway to the right of the hallway built-in leads to the small north-east bedroom mentioned above. 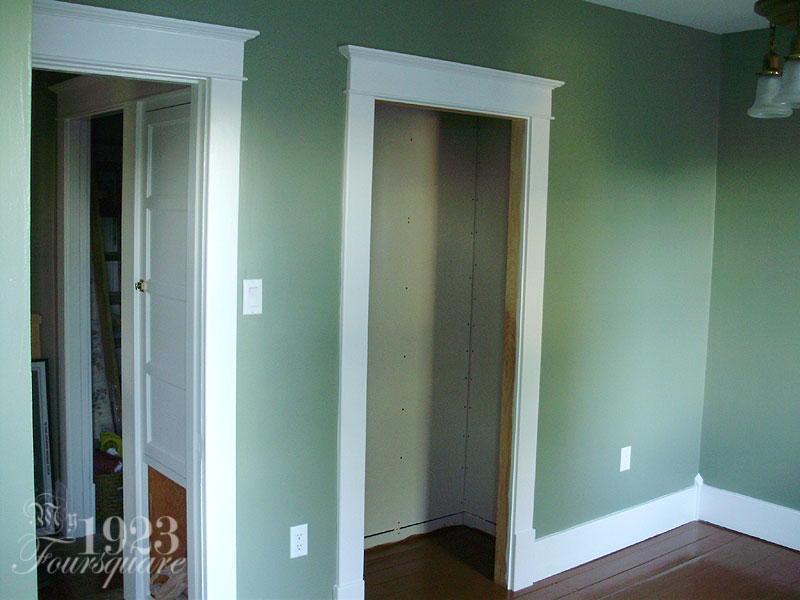 Here is the newly refurbished and rewired (antique) light fixture, with antique glass shades. This fixture was bought in rough shape on eBay over a year ago, and the shades were purchased separately (also on eBay). The fixture (along with all the other ones in the house) was rewired using antique reproduction Rayon covered wire. The painted finish on the fixture also had to be redone from scratch. 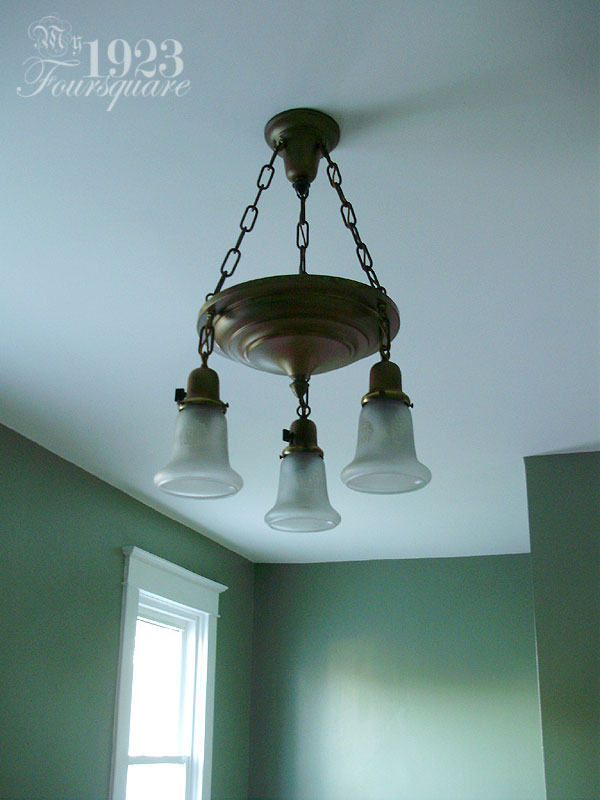 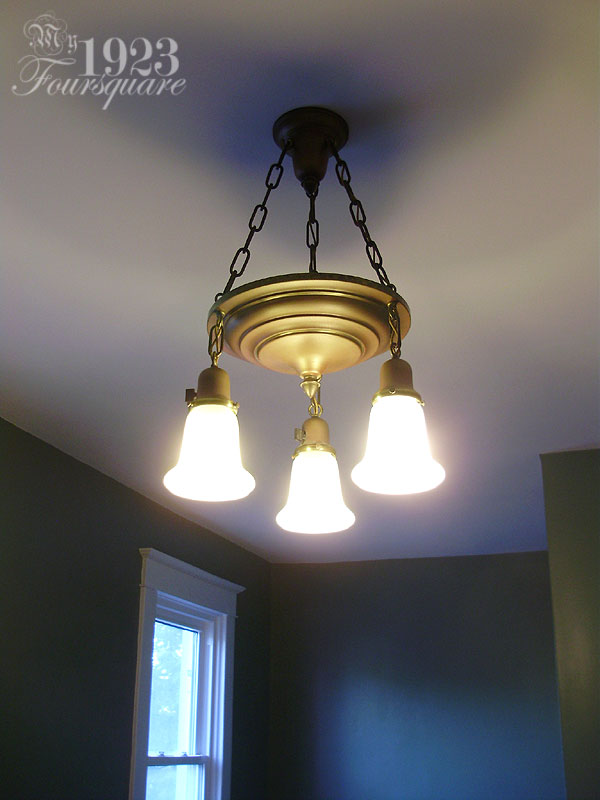 Note: for those who are curious, the wall paint is Behr's "Olivine" and the floor is "Florence Brown".
Posted by JC at 6:14 pm 7 comments:

The upstairs "L" Room is finally done, and I'm posting 2 entries of the finished results. This first part shows some of the last touches before painting the walls and cleaning-up the floor.

This was the last section of baseboard that I had to install, along with the little corner stake (which were removed when the entire closet walls were rebuilt). I reused an old piece of baseboard (from the pieces I had removed for repairs in several rooms), installed it, caulked it, primed it, painted it, and I had to wait a day or so to dry thoroughly until I could tape it to paint the walls. 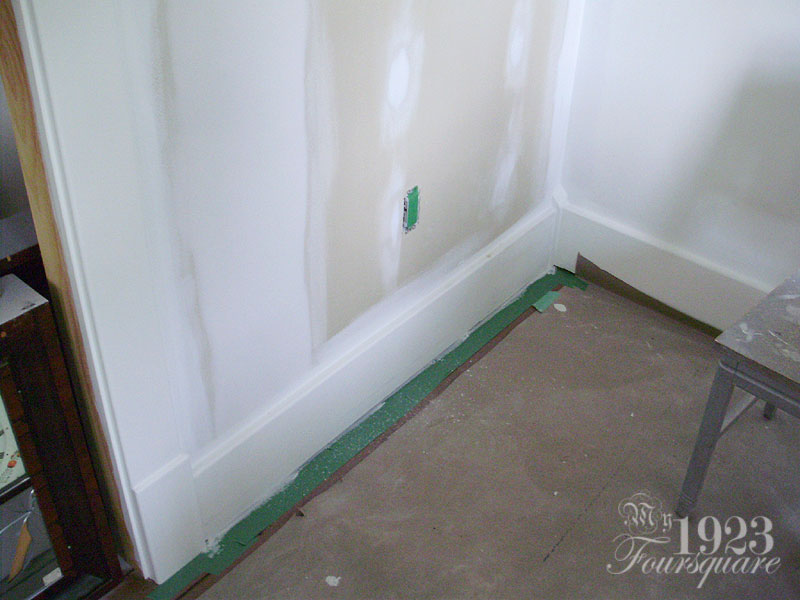 The ceiling (after all that messy and horrible drywall work) got seal-coated with some of my scrap paint (which turned out to be mostly a transparent base), followed by 2 thick coats (or was it 3?) of my flat white ceiling paint. Considering I was going to hire someone to do the drywall joints on the ceiling, I'm extremely pleased with how nice and flat it turned out. 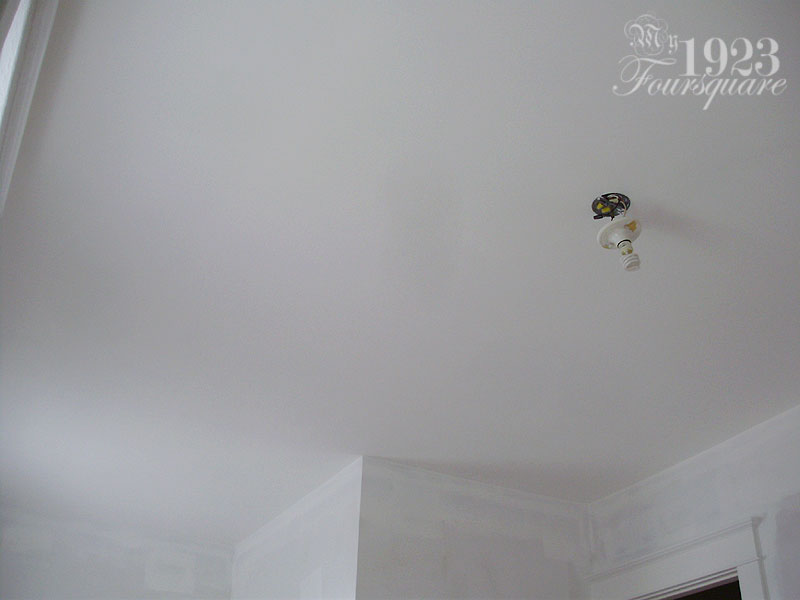 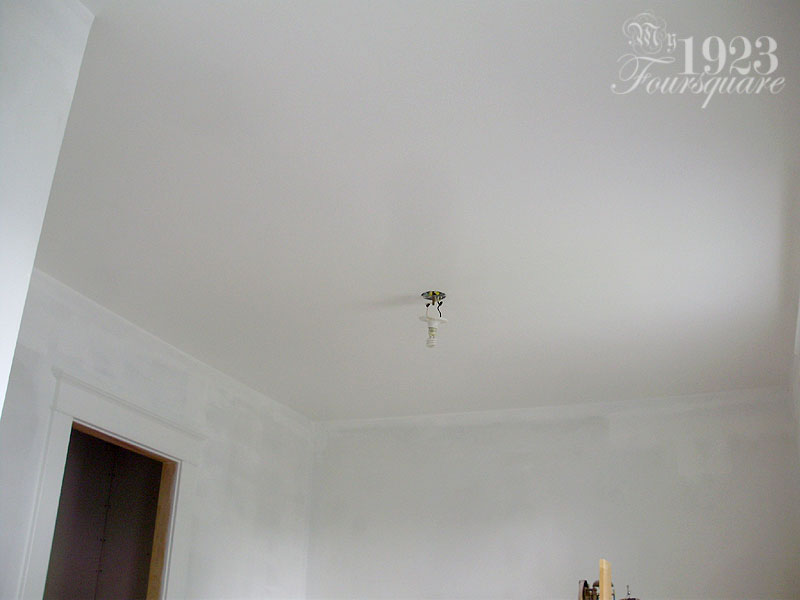 Next was the taping of all the mouldings. I've mentioned it before, but I'm not a fan of "cutting-in" around mouldings. I do it at the ceiling edge (and it never looks that great), but I prefer the nice clean lines that I end up getting with tape. You *DO* end up needing some touch-ups from bleed-through or missed corners, but with a small brush these are quick and easy to do. 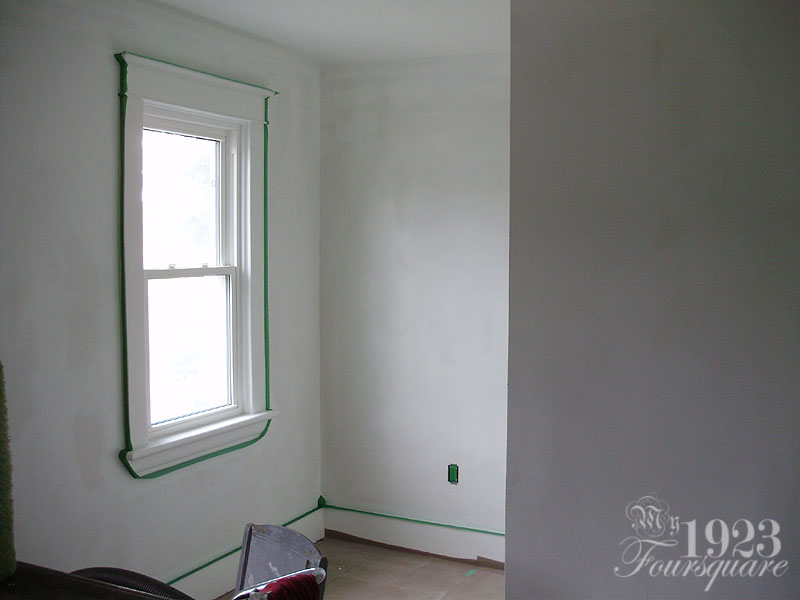 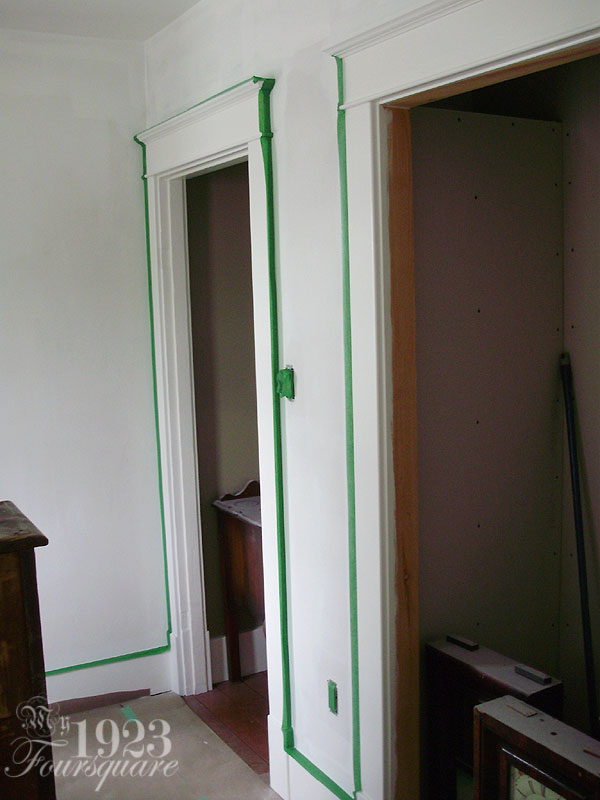 This was after the first coat of green (Behr's "Olivine"), and this is the first time that I don't get great coverage on my first coat, using the Behr Premium Plus paint and primer in one. I always do 2 coats anyways, and it looked fantastic after the second coat, but I wasn't thrilled with the first coat (as far as the coverage). 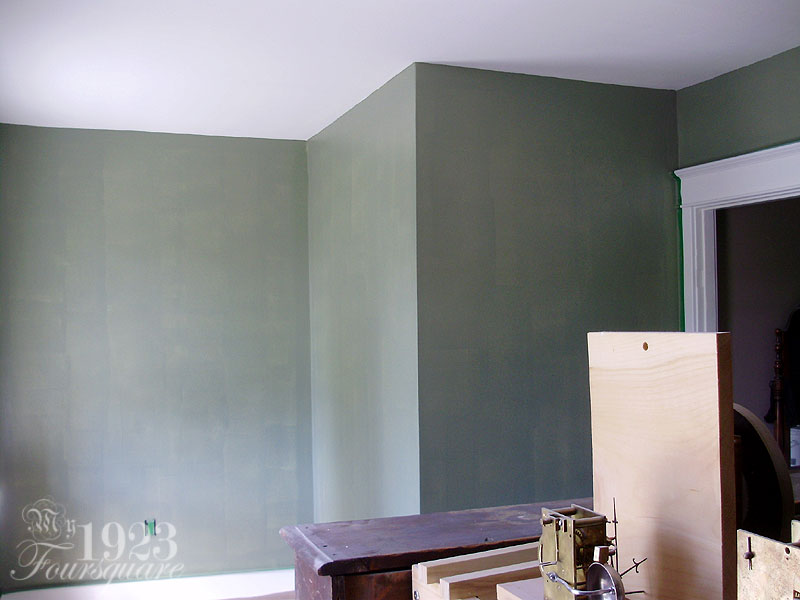 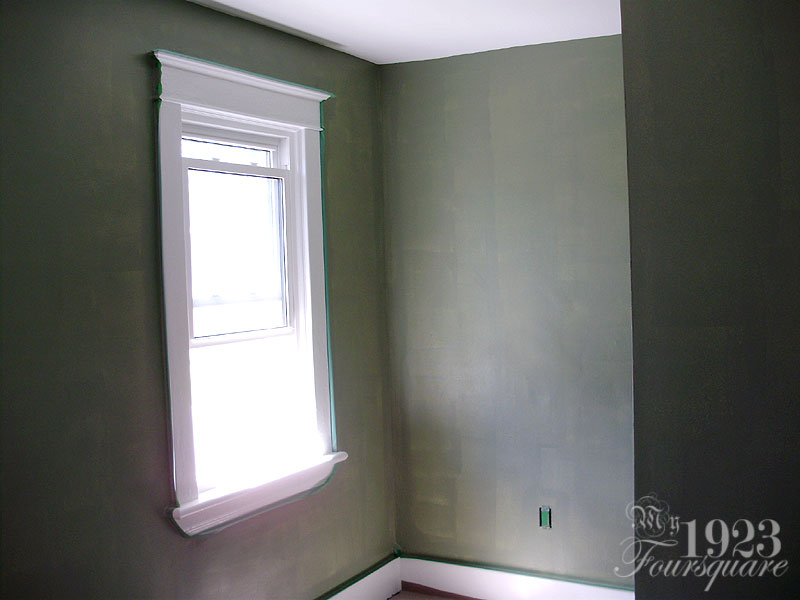 Check out the next post to see the final before and after photos!
Posted by JC at 5:47 pm No comments:

I just did the first coat of ceiling paint, and I also primed the new wall section. A few days ago I also installed, caulked, and primed the last section of baseboard.

I will need one more coat of ceiling paint, a few coats of white on the baseboard, then the walls can be painted.
Posted by JC at 9:03 pm No comments:

I figured that a boring update would be better than no update, but at least this one will include a bunch of photos! :D

If you've read my last post, you know that I'm finally pushing to have the "L" Room upstairs DONE and start using it. The last steps are the ceiling and painting (and if you want to get picky, there's still no doors, and I'll work on the closet interior later).

Today I sanded all the ceiling and corners (at the top of the walls). What a mess. Just when I thought I had done a pretty good job, and that there'd be minimal sanding, I end up being totally wrong, and making a huge mess.

Overall, though, the ceiling did turn out nicely, and I had only one spot that needed touch-ups.

Here was the third (touch-up) coat from yesterday (drying): 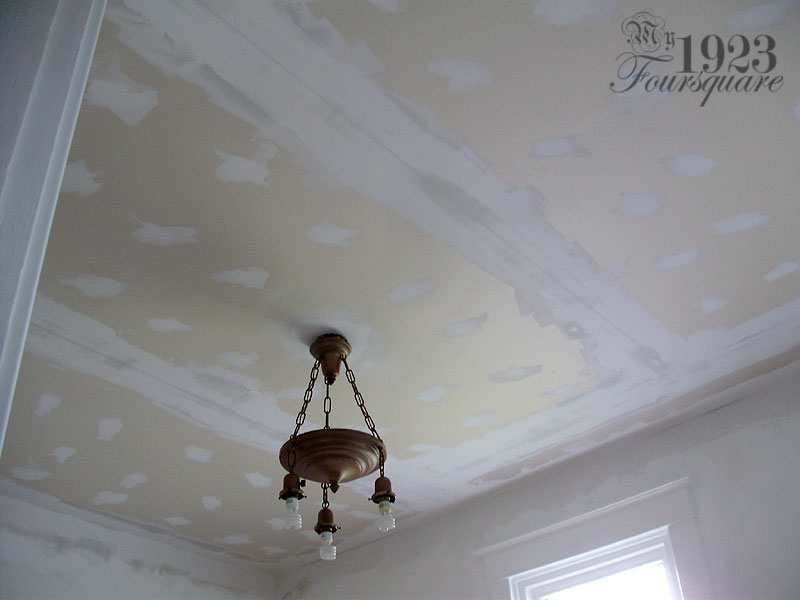 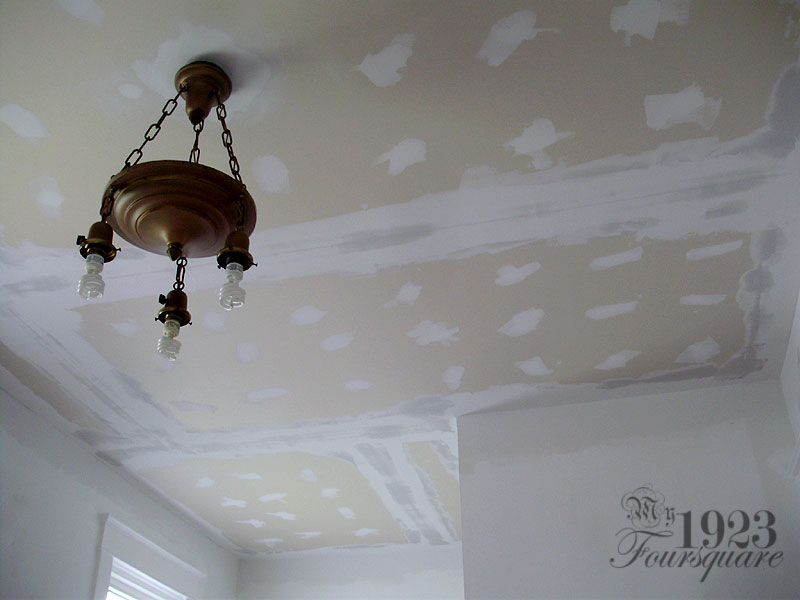 I mentioned that I got some new drywall trowels and I thought I would show them. Pictured are the two new trowels (the corner trowel and the 10 inch trowel) along with my trusty 6" trowel which I've been using for years. You can see that the blade is spotty (from accidentally leaving it damp which caused rust spots to form). 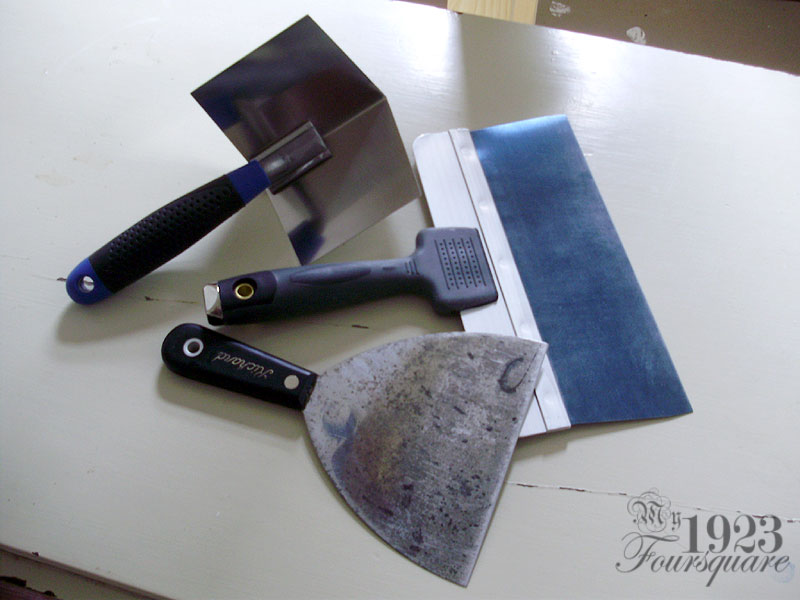 This was a photo (a "selfie" if you will) of me from this afternoon right after I had finished sanding everything. There was dust EVERYWHERE, including some that was caked-onto my sweaty t-shirt, and it billowed all the way through the hallway upstairs.

Shortly after this, I cleaned up all the dust (shop vac), dusted myself off, and took a shower.

And the reason my mouth is open is because my nose was a bit plugged-up. 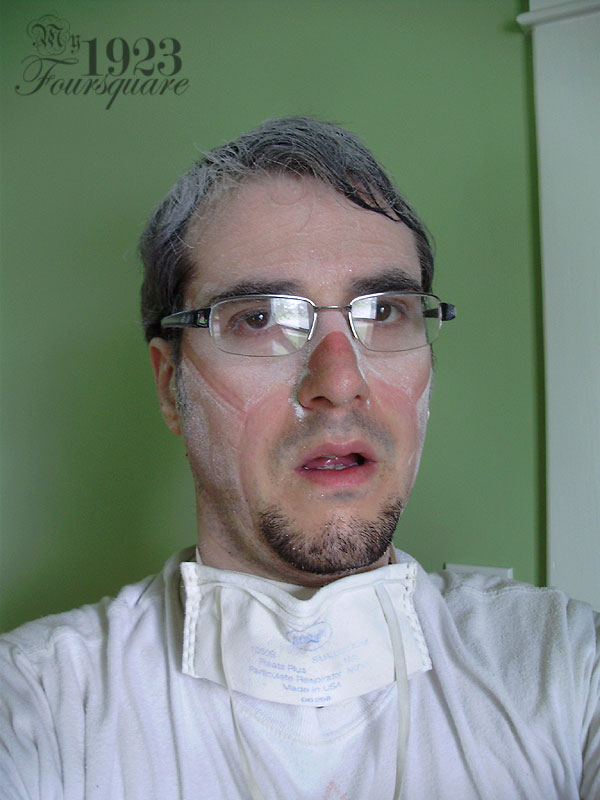 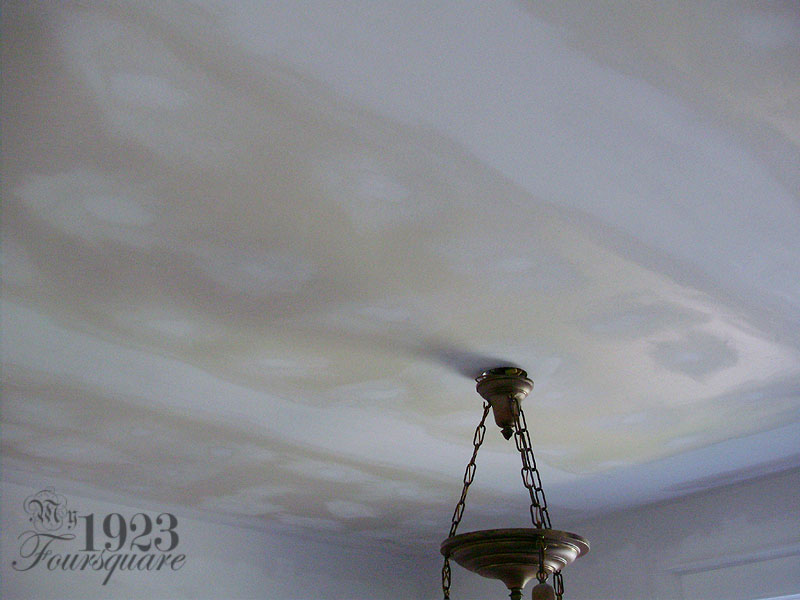 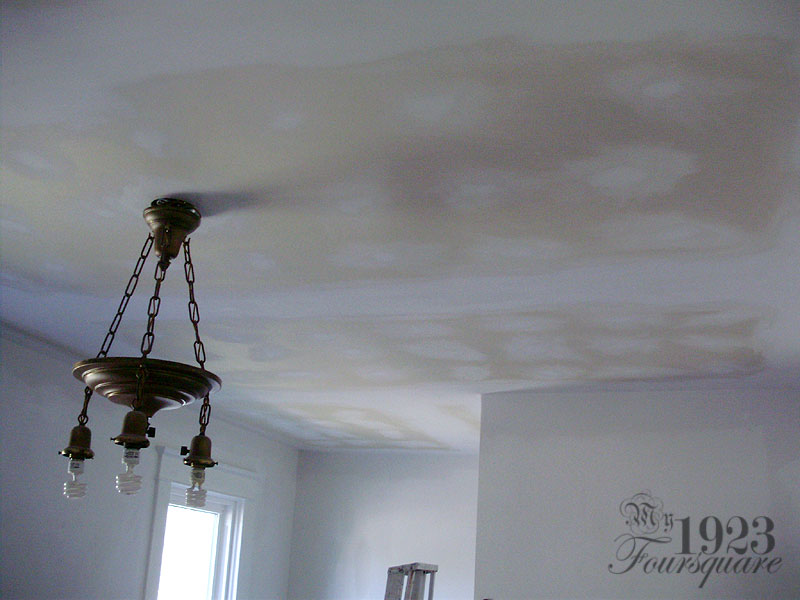 I'm really glad that I decided to protect the floor with this cardboard stuff. It's a construction-grade cardboard used both as a floor protector, and as a layer under hardwood (to prevent squeaking). I'll be using some when I redo the hallway on the main floor, but it comes in a huge roll for something like 15$.

One of the main reason for laying that down was for the paint drops (from primer, ceiling and wall paint), but I ended up also dropping several blobs of drywall compound everywhere (which would have been a nightmare to clean out of the gaps in the old floor). 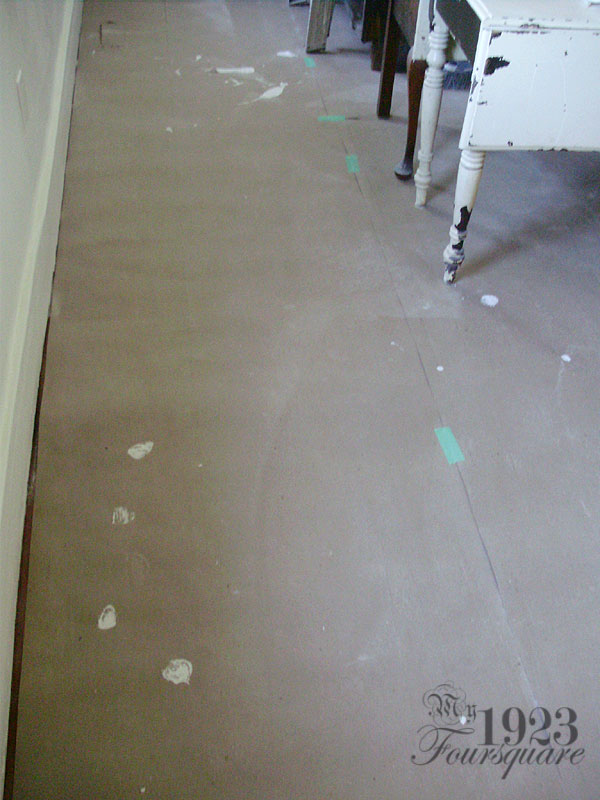 As a last minute decision, I decided to go ahead and install the last panel in the corner (see photo below). If you remember a long time ago, I had loosely fitted this piece, but I didn't attach it because I wanted to be able to have easy access around both sides of the chimney for when I knock it down. Well, I figured I'd have enough room from the other side, and that it would be so much easier to just finish this room completely -all at the same time, and be DONE with it. Otherwise I would have needed to go back later and mud/paint this section maybe a year from now when the chimney is gone.

So this just made more sense. I cut the hole for the outlet, screwed-in the panel, mudded it (first coat only), and once it's good, I'll install that last corner block and length of baseboard, paint those, and then paint the whole room in one shot. 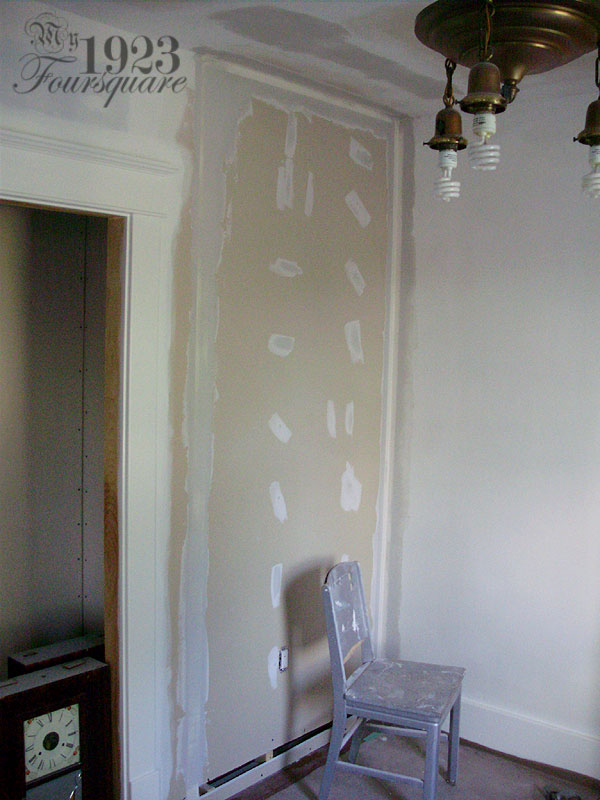 I figure that if things dry fairly quick, I could be done with this room by next weekend.
Posted by JC at 12:48 am 3 comments:

I don't have much of an update, and I didn't think to take any pictures yet, but rather than pay someone, I've finally caved and decided to mud the ceiling in the "L" Room myself. I did 3/4 of the scratch coat a week or so ago, and then ran out of mud. I bought more mud about a week ago, and I finished the scratch coat a few days ago. That brings us to today, where I did the first topcoat on the seams and corners.

It actually went really well, and I attribute that success to some new tools. I watched a few drywall videos on YouTube several weeks back, and they always make it look SO Fast and EASY. I mean, it's not HARD by any means, but there's a lot of technique involved.

What blew my mind though, was the corner trowel.

Some of the best DIY videos I've found (including the detailed ones I used as a reference to install the new vinyl siding on the garage) are from Shannon at House Improvements (one of his videos is below).

In this drywall video, you see him use the corner trowel at around the 3:10 mark.

I don't know how I went so long without even knowing that this tool existed. For YEARS now, I've been tediously doing my corners mostly (or partly) one side at a time, because a regular trowel always leaves an odd edge in the corner. I've also been doing most of all my drywall with only a 6" trowel (which isn't really wide enough for finishing coats).

So after having watched a few of his videos, I decided to invest in both a wider trowel, and a corner trowel. These range in prices, and I went with an inexpensive set at around 10$ each trowel.

Today was my first time using both, and wow! What a difference! The job went faster, the joints are smoother, and the corners and joints look wonderful!

I think I can probably get away with just another light pass, some light sanding, and then I'll be ready to paint! I've already had the wall paint bought for months now, and I still have leftover ceiling paint, so I have pretty much everything already on hand.
Posted by JC at 9:56 pm No comments: