Alright, it's time for part 3 of 4 of the Settee project. I finished the settee yesterday (Saturday the 15th) after another 11 hours of work on it. I went into work at 8:30am, and I finished the loveseat at 7:30pm (quick note: I may go back and forth between loveseat and settee but I'm always talking about the same piece of furniture).

I might have posted the finished piece today, but I forgot my camera at work with all the final photos. Fortunately I have many of the other photos still to share for this third post.

This post will deal with the restoration of the frame, refinishing the legs, and all the steps involved in the reupholstering of the seat (installing webbing, springs, tying, stuffing, etc.)

When I last left you, I was finally down to a bare frame: 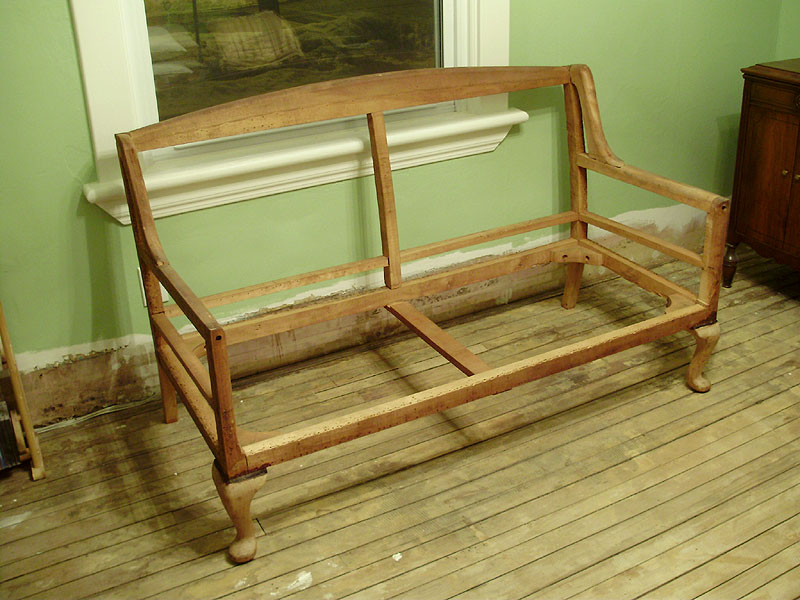 As you can see, someone had sanded all the finish off the 4 legs. The legs (as well as the entire frame) are made of solid birch. Birch is a very common wood used for upholstery frames. The legs were originally stained to look like mahogany. You can still see some of the stain on the tops of the legs, as well as some of the stain that overlapped onto the wooden frame pieces (originally applied with a paint brush).

The entire frame was loose, so it all had to come apart. 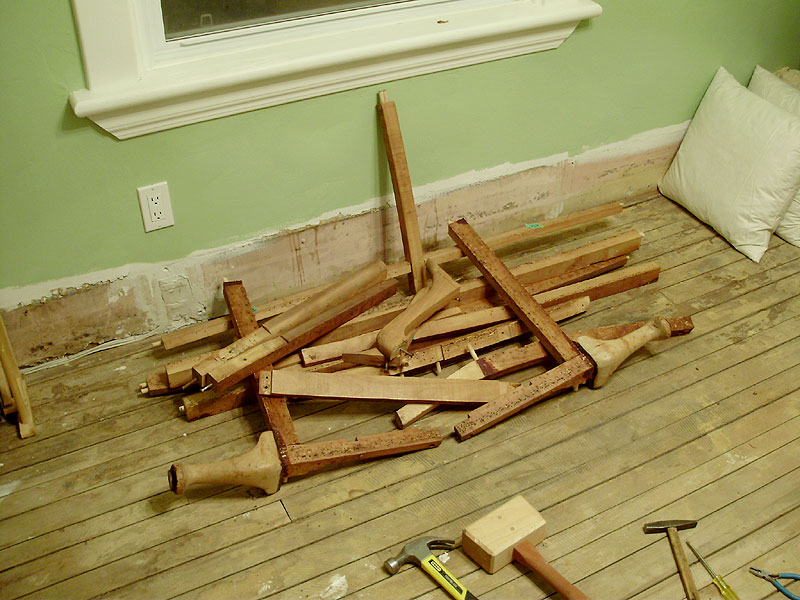 While most of the frame pieces were in good shape, I repaired several sections that had chunks of wood torn out, or large missing chips (especially ones on corners). This included one entire strip along the right-hand side rail, and 4 smaller patches. These were fitted with the use of a router, and patched with small pieces of birch, glued with carpenter's glue. 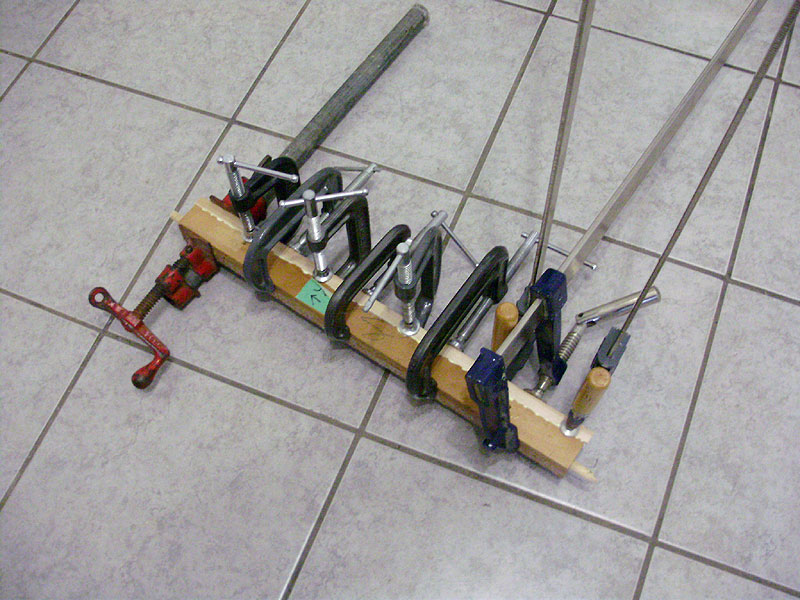 Once all the patches were fitted, and trimmed, all the old holes in the frame (from thousands of tacks and staples over the years) were patched with a urethane glue. This is a modern "construction adhesive" that we use for the same purpose at work, and it dries to a hard rubbery consistency, which helps hold staples better than something like wood filler (which just crumbles).

The frame was originally held together with hide glue (aka "hot hide glue", or animal protein glue, which is made from hides and bone, and has been used for over 1000 years). Because of this, it was easy for me to take apart, and reglue with new hide glue. I prefer to use hide glue for 4 reasons:
- It keeps the piece historic.
- It is reversible (it dissolves in hot water).
- It sticks to itself, so you don't need to painstakingly scrape all the old glue joints.
- It is an ideal glue for chairs and high-wear pieces of furniture because it creates a rock hard immovable joint similar to epoxy. A lot of other modern adhesives have a flexible joint, which eventually fails (especially when used on chairs).

The drawbacks to hide glue are:
- It's a huge mess (although it cleans up easily with water).
- It takes a few hours to prepare the glue before you can use it.
- You have to apply it while it is hot (and be careful not to overheat it), and clamp it within just a few minutes.
- It needs to dry for at least 24 hours.

Let me just say: This was a HUGE pain in the ass to put together by myself on the living room floor. I could not find all my ratchet strap clamps, which made things harder, but I eventually managed. I used a tourniquet diagonally in the frame to ensure that the frame would stay square while it dried.

You will also note the refinished legs. These were stained with some aniline dye stain that I had on hand (the same one I used on the bathroom vanity), and top coated with hand-brushed shellac (6 or 7 coats) and wax-polished (again, to keep it historic). 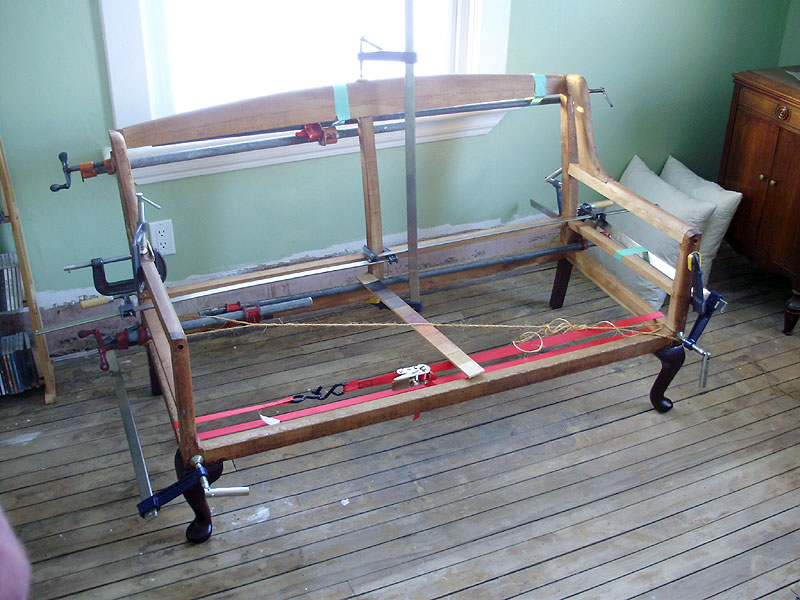 One of the two small arm patches: 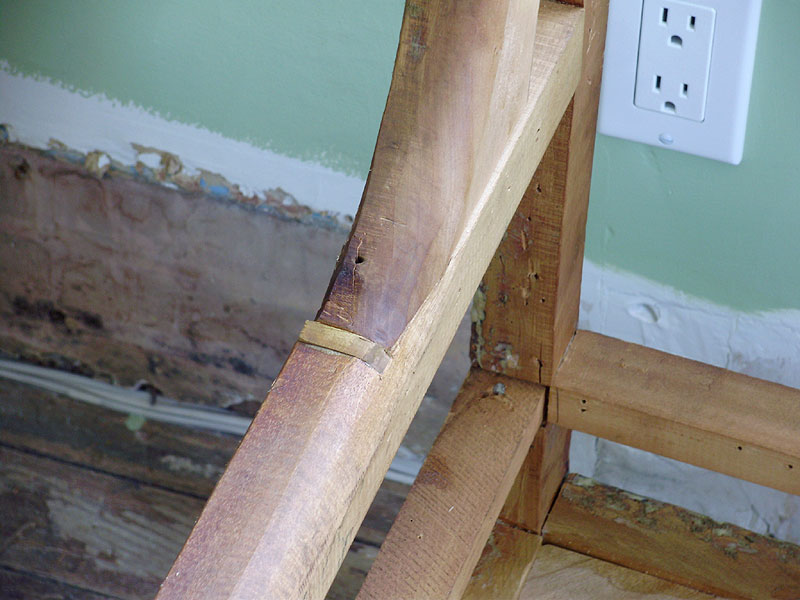 At one point, someone had taken a chunk out of the centre bar and fitted it incorrectly, so I filled-in this section with a block (mostly just for looks). 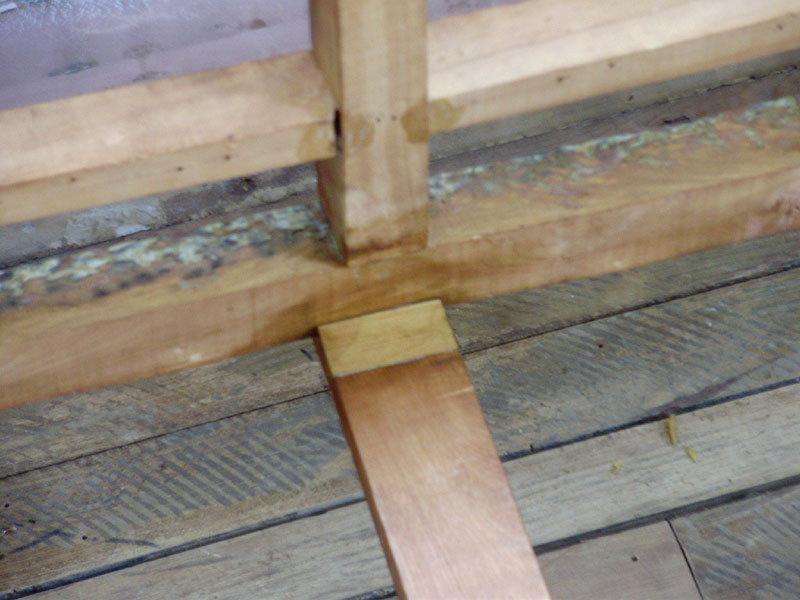 Here was the repaired frame once I brought it to work, ready for upholstery: 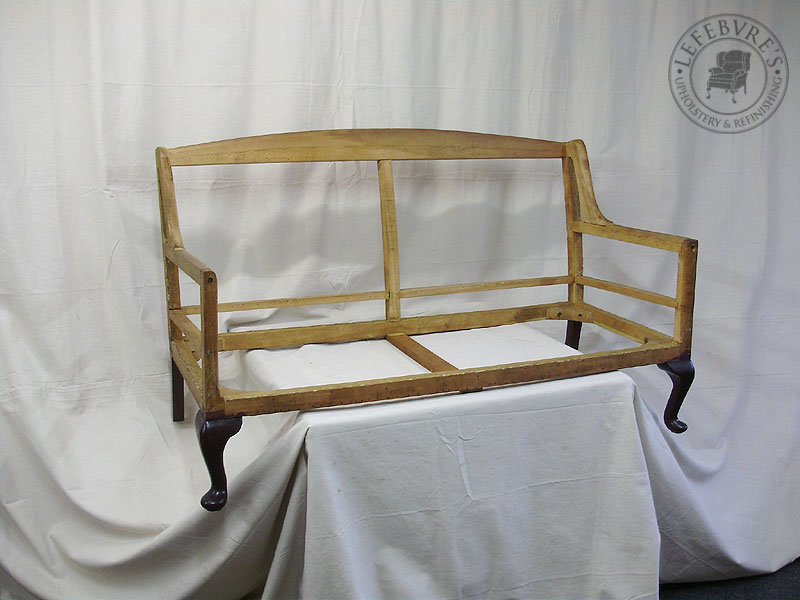 The first step was the installation of new jute webbing. We use this webbing on all our antique restorations, and we prefer to use as much as possible, to help make the upholstery last longer. If you will recall from previous photos, my sofa originally had only 4 vertical straps per side, and 3 horizontals. 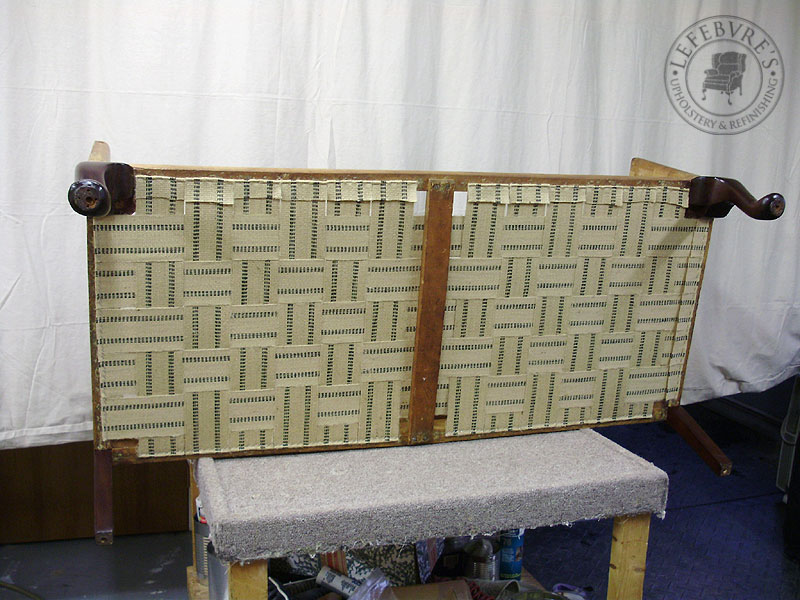 Once the webbing is installed, the springs are attached. Usually we use "hog rings" which are metal rings, crimped to the springs and into the top layer of webbing. For this sofa, and simply out of personal preference, I chose to hand-stitch the springs instead. This is way more time consuming, but I just prefer it. This is the hand-stitching as viewed from the underside. 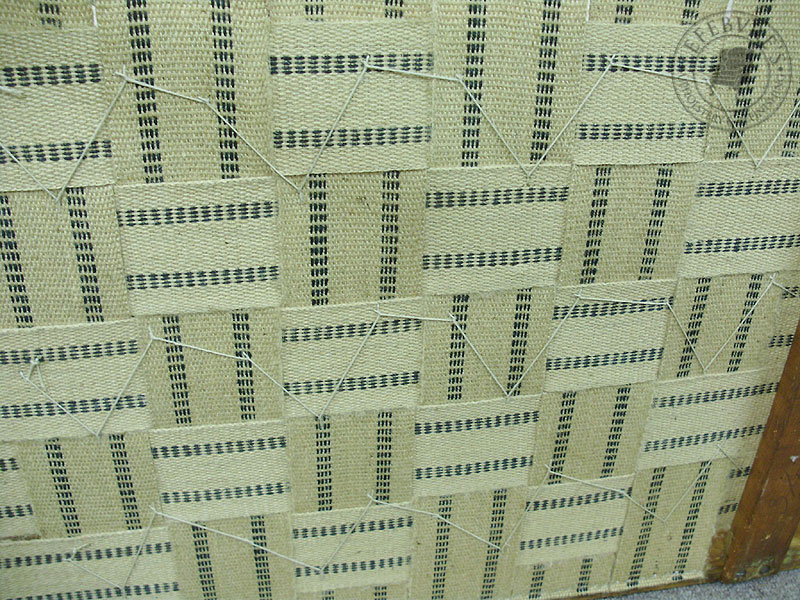 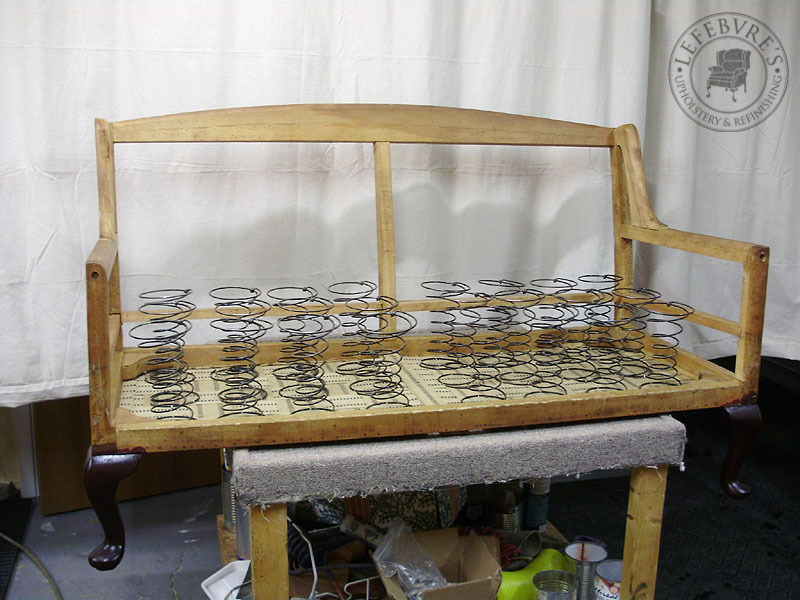 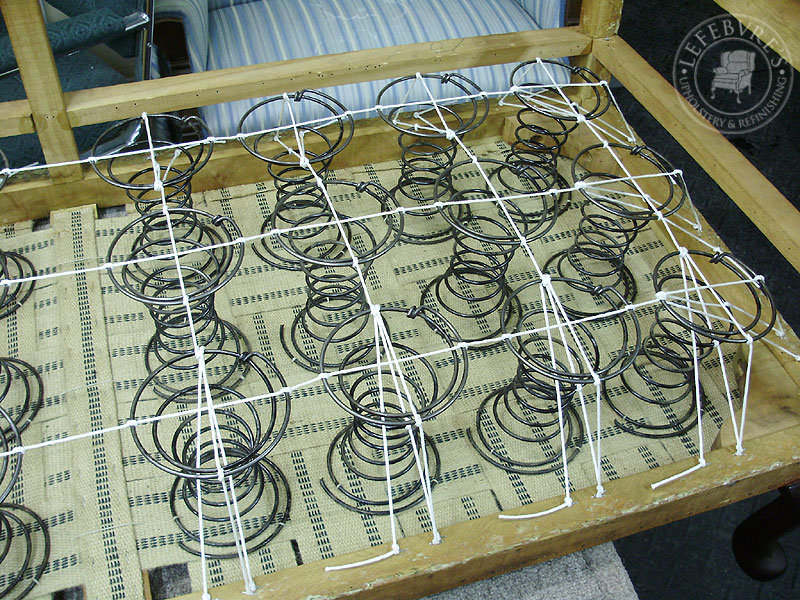 The original spring ties were just a 4 way tie (as shown above), but I definitely wanted an 8-way, which is far superior, stronger, and will prolong the life of the upholstery. The 8 way was finished on day 3. 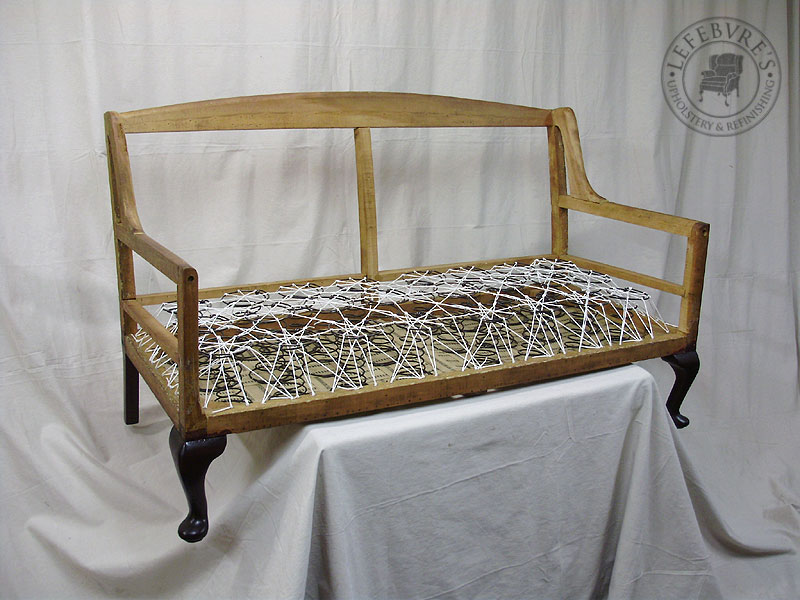 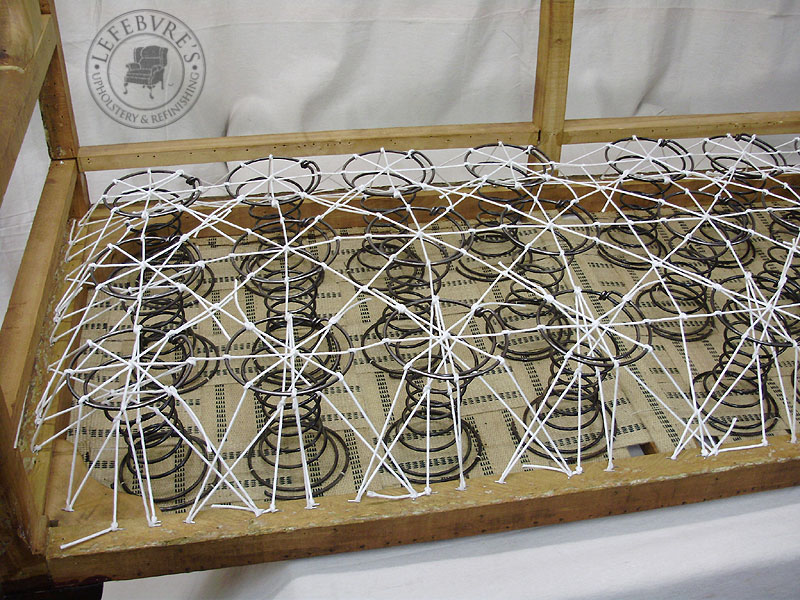 After the springs were done, they were covered in burlap, and then the burlap was hand-stitched to the tops of the springs to keep it in place (they had it done this way on the original as well). 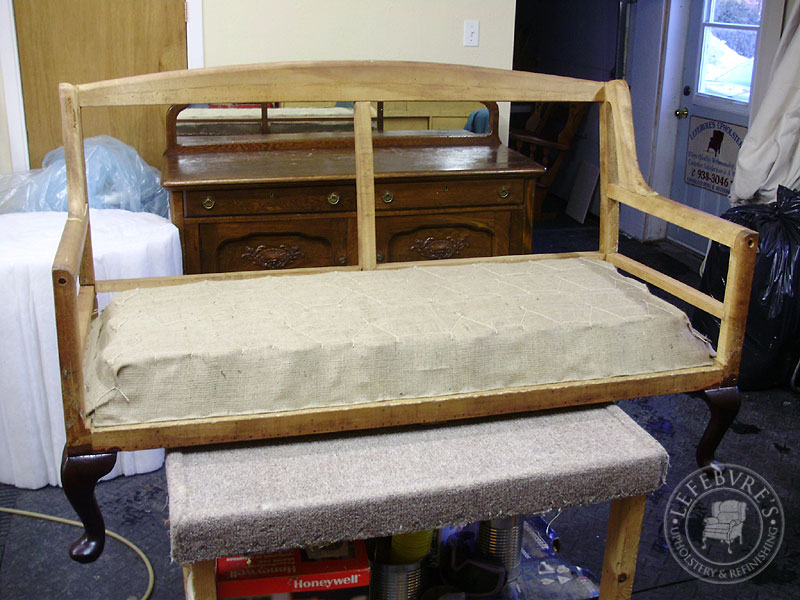 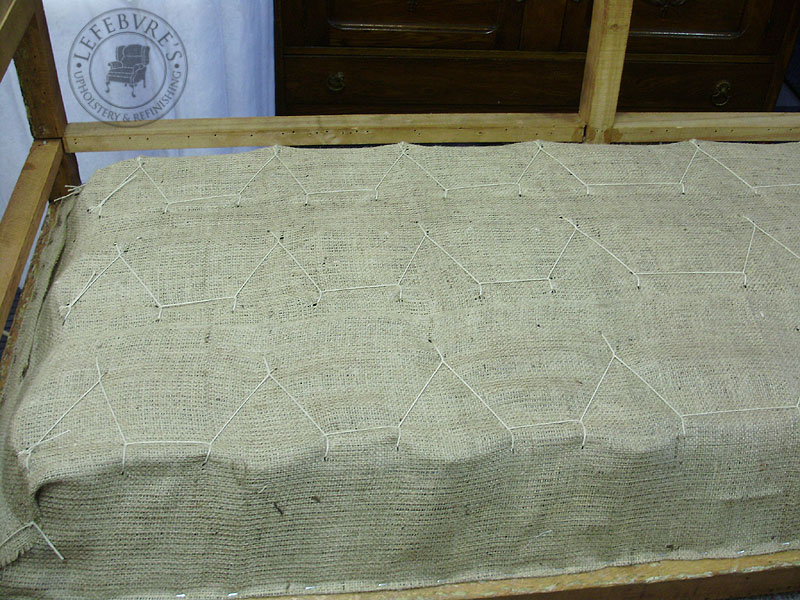 The next step was to install, restore, and re-stitch the front edge roll. The original edge roll was simply wrapped-over in fresh burlap (I used a double layer), and re-stitched over the top to preserve the original shape and firmness.

Half way through the first row (and yes that's a big-ass needle): 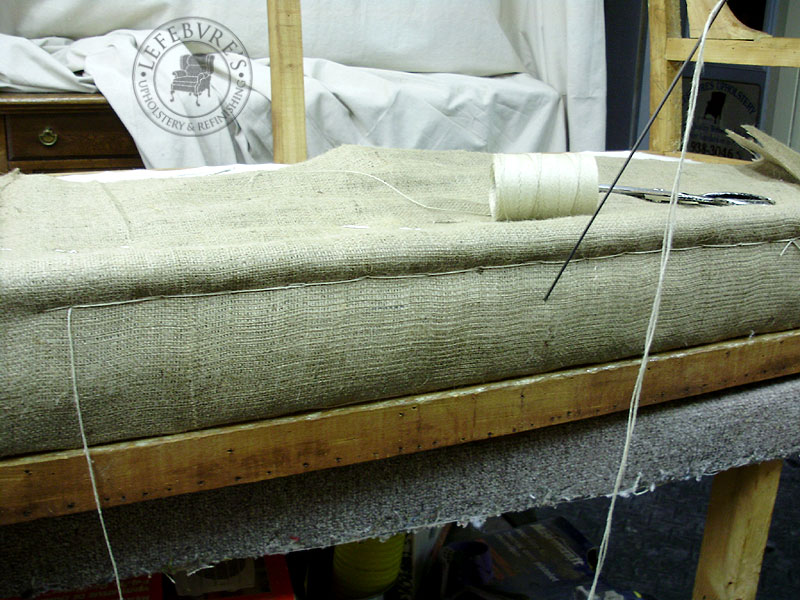 Edge roll finished, and top-stitched to the burlap/springs. The edge roll took several hours to do. 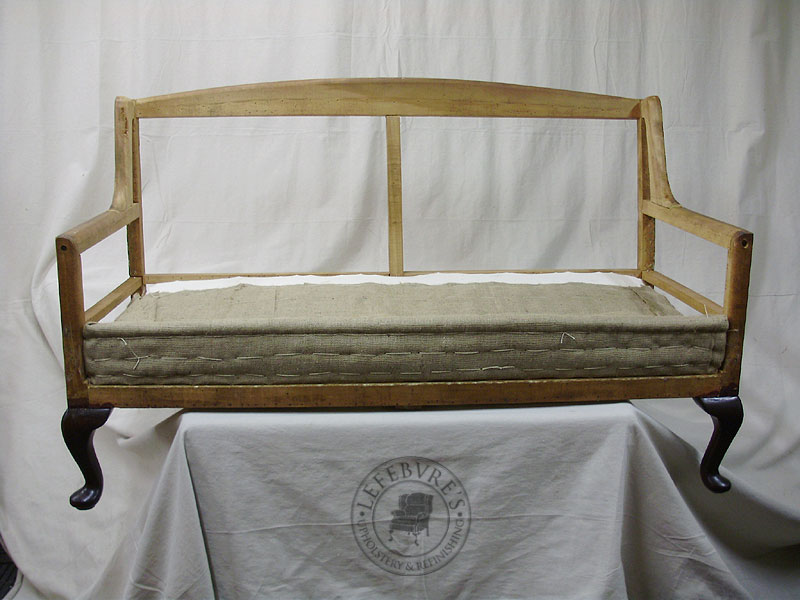 The next steps involve the re-stuffing of the seat padding over the springs. You will notice some white cloth which I didn't mention. This was just another layer of canvas added over the burlap to help contain the straw/dust. The first layer of stuffing is about an inch of straw (yes STRAW). 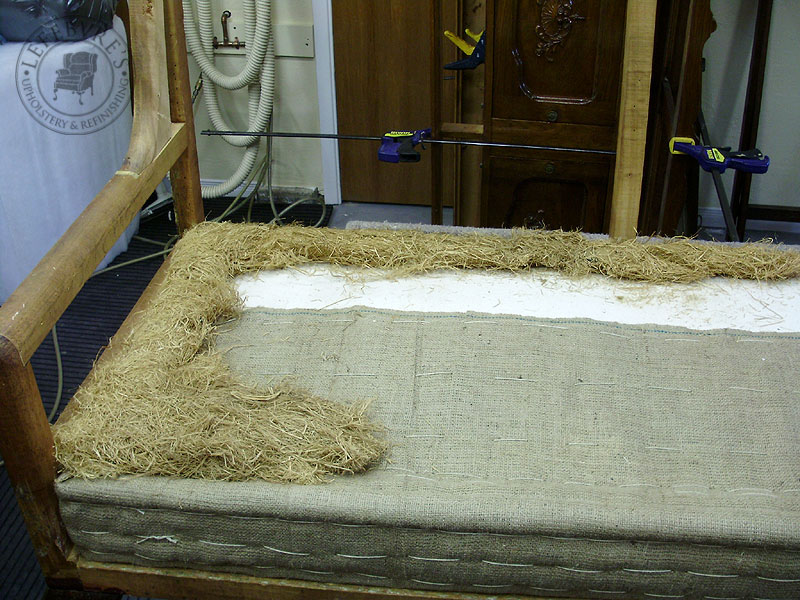 Slightly more is added at the front to fill the small hollow behind the edge roll. 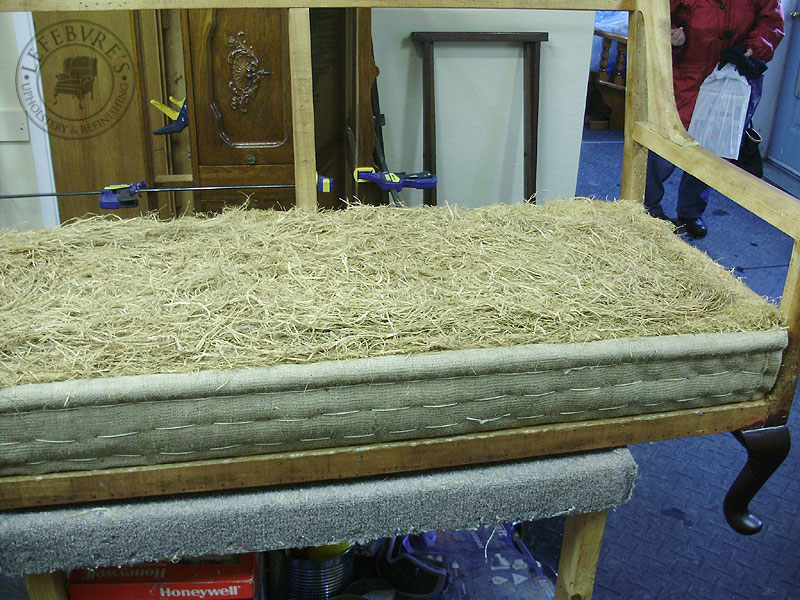 After this is the layer of moss and "lower grade mixed hair". 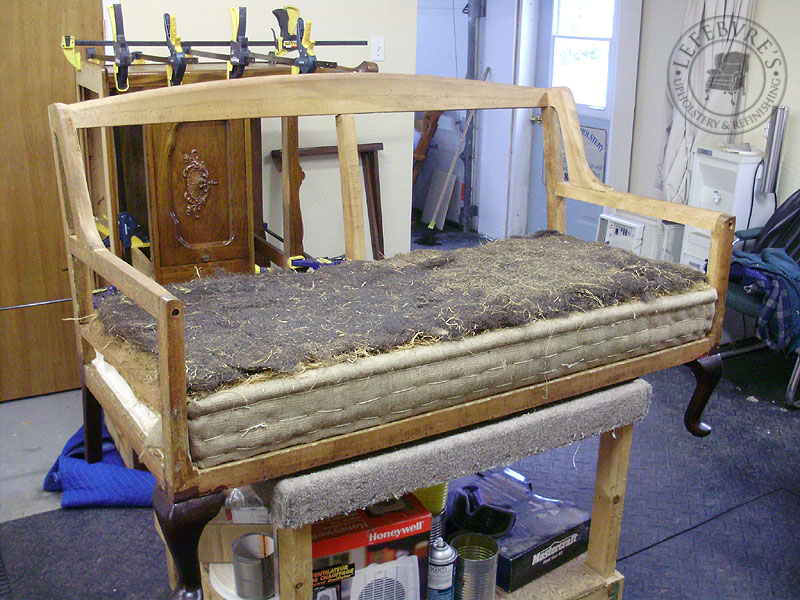 Followed by the lovely black horsehair (with a few previously repaired patches in a light coloured hair). The whole thing then gets loosely stitched all the way through into the burlap over the springs, to keep all the stuffing from shifting around. 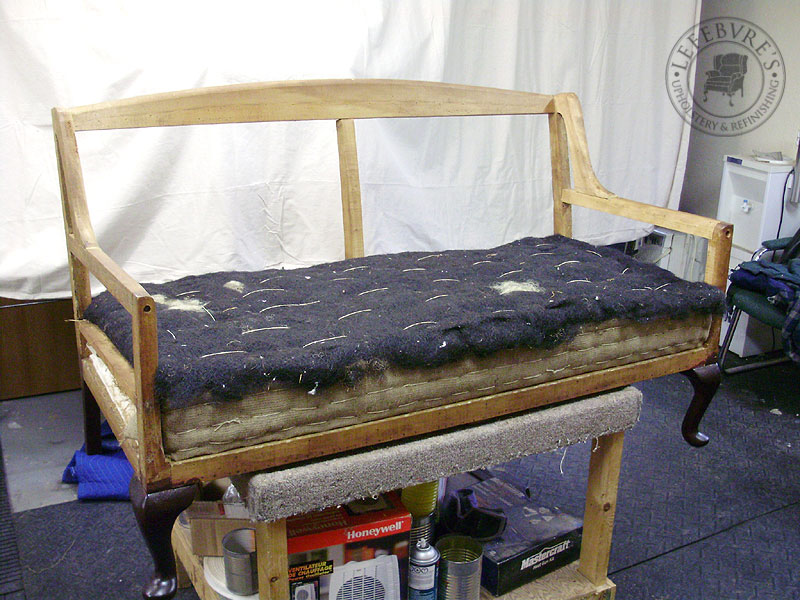 The last layer is cotton (aka cotton felt), followed by a thin muslin cloth. In this photo, I had way too much stuffing over the front, and I had to redo the front part again to square it up. Not shown is also a thin layer (a band) of original moss stuffing which was stitched over the front of the edge roll. 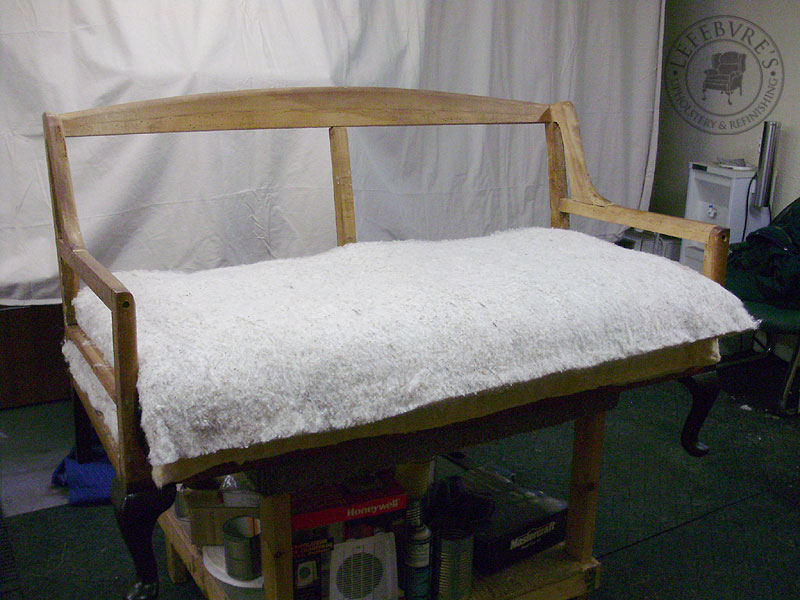