The settee has been finished and brought home for a week now (Monday the 17th) and I've been procrastinating about writing-up this last part.

I was excited when my fabric came in. It came in around 3 in the afternoon, and I waited until work was done (4:30) to open it, unroll it, and look at it. I was really lucky to find that although I had ordered only 5 yards, they had sent approximately 7 because it was the end of the roll. As it turns out, I end up needing those two extra yards! 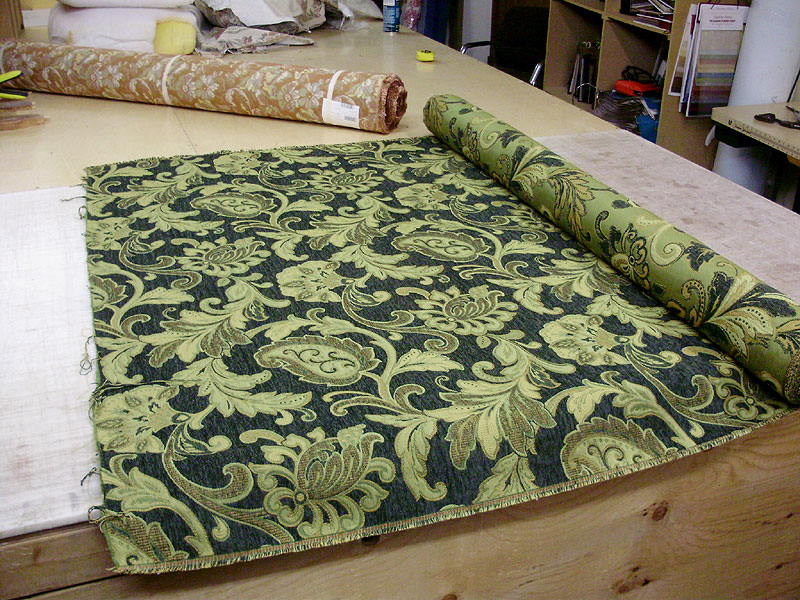 The pattern was a bit brighter and more "lime green" than I had thought, but otherwise, it was pretty much what I was expecting.

Continuing with my seat stuffing, I fixed the cotton (removed some from the front) and finished my rough cover. 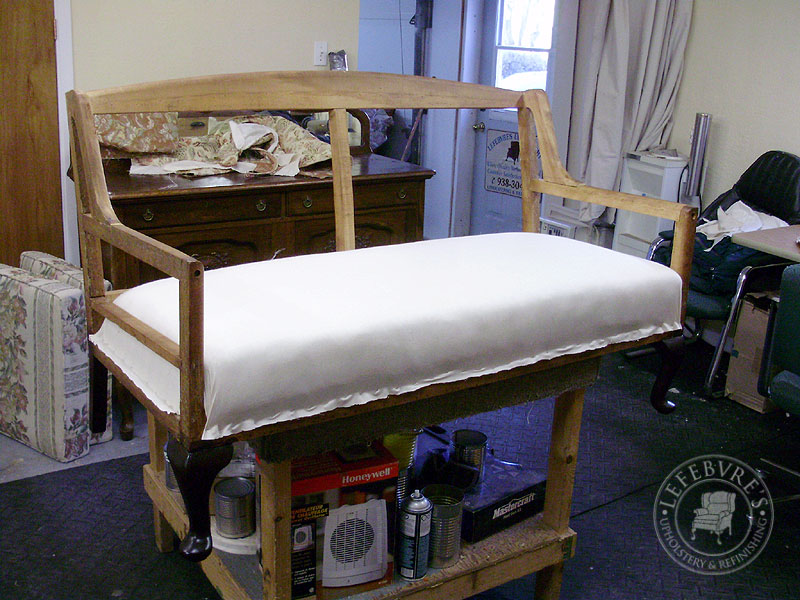 Next, I prepared and sewed my cover. Originally I wasn't going to have a piping running across the front edge, but Pierre suggested that I put one to "square-up" the look of the seat.

Because there's a piping there, I wanted to match-up my fabric band. Basically, because there's a sewing there (the seat cover is 3 pieces consisting of the main seat, the piping, and front band) you lose an inch of the pattern if you use the same piece because of the 1/2 inch seam allowances. In order to match the pattern, you need to cut both pieces (main seat and front band) from two separate places on your fabric. Does that explanation make sense? Basically you need to waste quite a bit of fabric to avoid having the pattern mismatched at the piping seam.

To make things even worse, I cut my front band WRONG the first time (the pattern ended up in the wrong spot), which wasted most of 2 yards of fabric that could have been used as my side arms or possibly the back panel. I was very upset with myself, but we carefully planned out the other pieces, and it turned out okay. 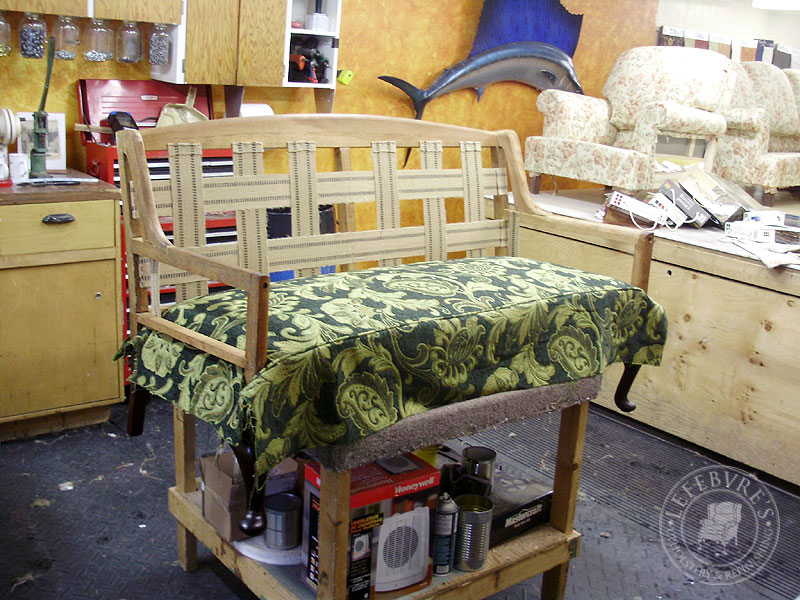 Once the seat fabric was finally put together properly (photo above) and tacked in place, I started working on the back. It's at this point that I realized that all the added height of the finished seat made it VERY difficult to add the webbing, burlap, and other "foundation" work on the frame. It should have been in place after the springs were covered, and the edge roll was reattached, but before any stuffing was done on the seat.

It was difficult to do, but I managed to get the back webbing and burlap installed.

Next was redoing the "lumbar roll". This was a padded roll of straw wrapped in burlap. I have never seen one like this, and neither had Pierre. It serves as extra support at the base of the back. I simply transferred the straw into a new burlap sleeve, and sewed it shut on 3 sides. 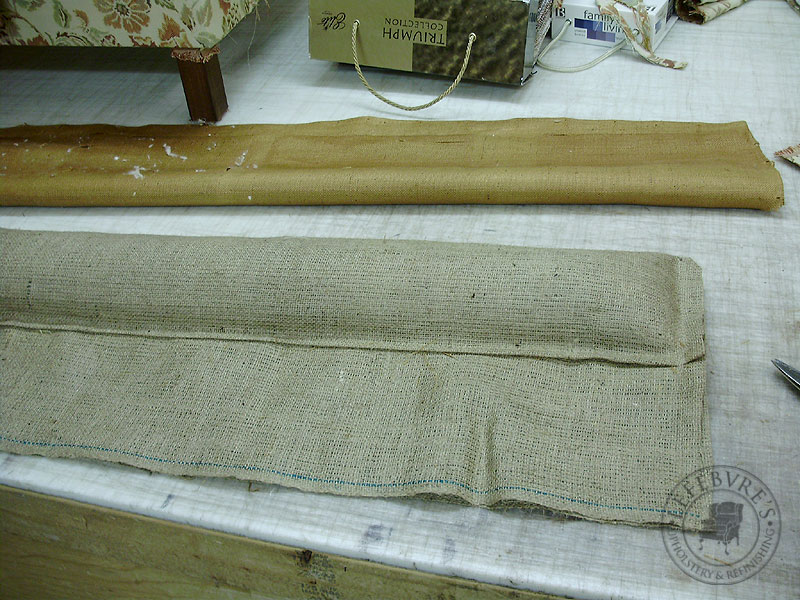 It was then tacked on the bottom rails, and hand-stitched to the back burlap/webbing (as before). 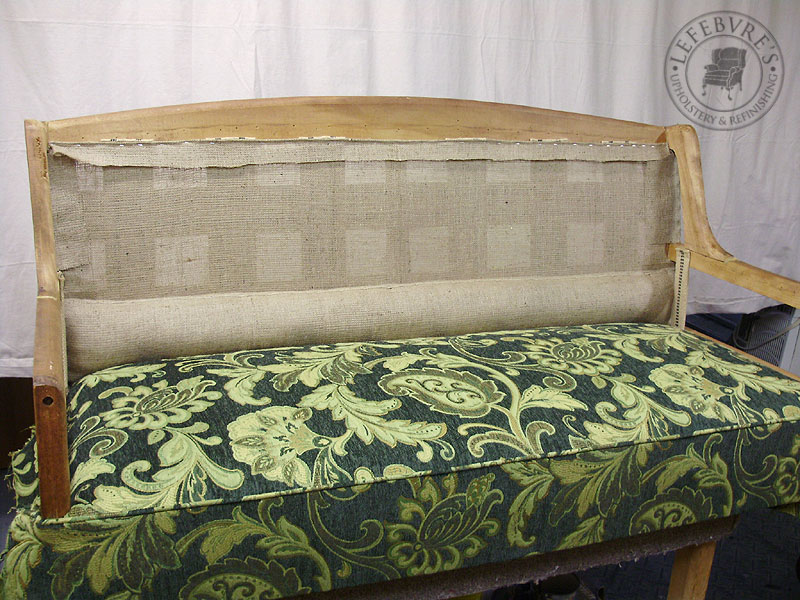 Here's a detail. Also note the added piece of webbing on the arm. Originally the fabric was just pulled around the burlap and stuffing of the side arms, but having a webbing here (folded in half) helps add a lot of strength in this area. Other sofas often have a wooden rail here for this purpose. 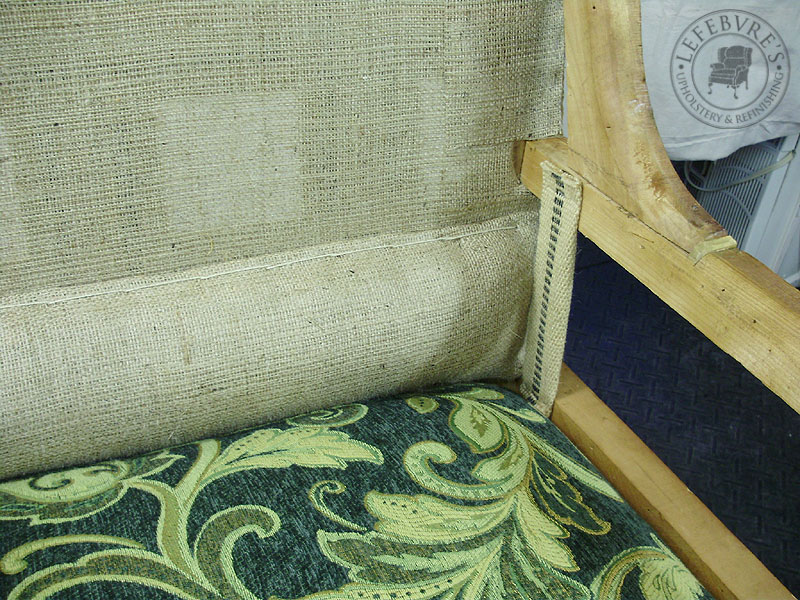 Re-installing the horsehair and moss padding. 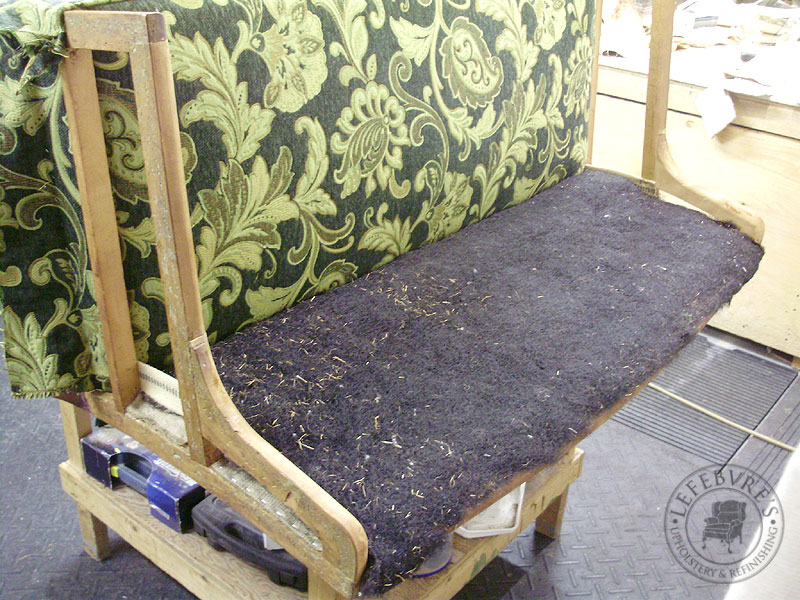 After the moss/horsehair was a layer of new cotton, followed by the rough muslin cover. 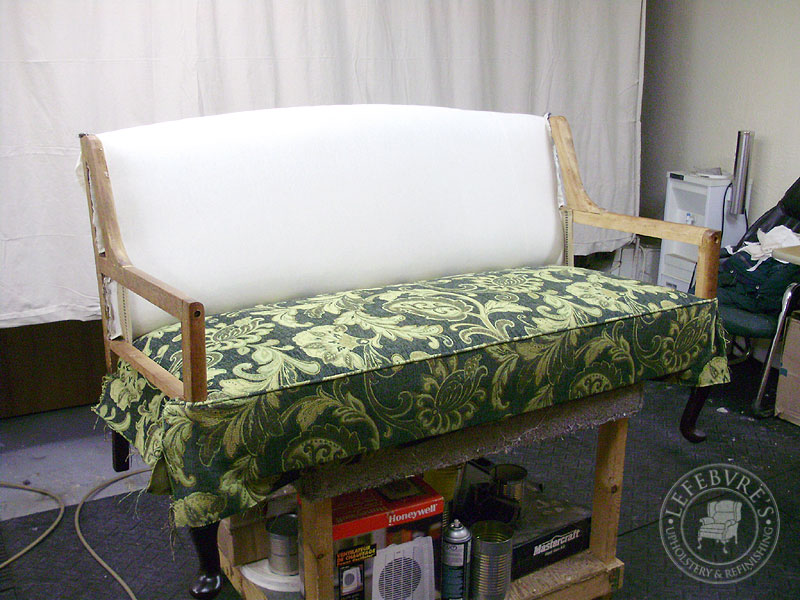 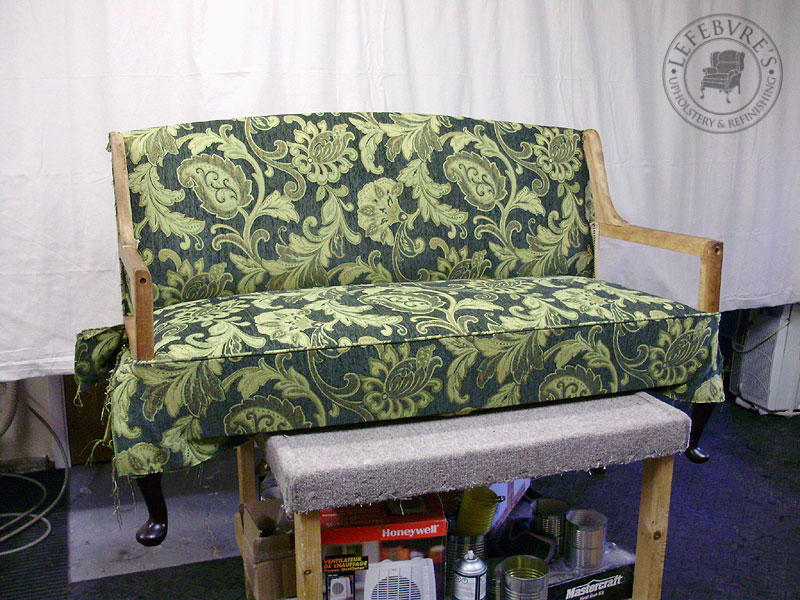 Work on the arms was next. Burlap was added (tacked only on 3 sides - none where the webbing strap above is), followed by the original horsehair padding. This was the only photo I got of this step. 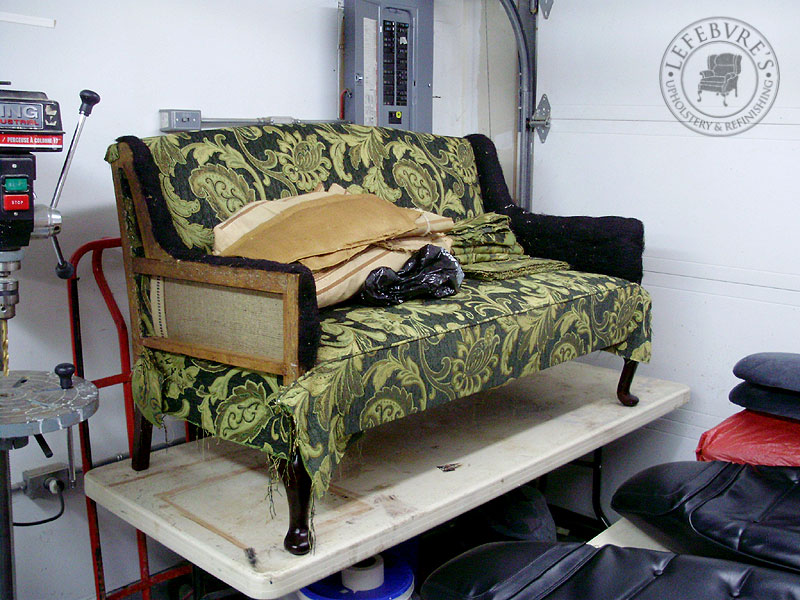 I reused some of the original cotton for the arms. I had wanted to do the same for the back panel, but it was unevenly worn, and I didn't use it there. The reason: the old cotton is more compacted, and has fewer gritty imperfections than the new stuff. It's also a bit thinner, and I wanted to keep the arms relatively "slim". 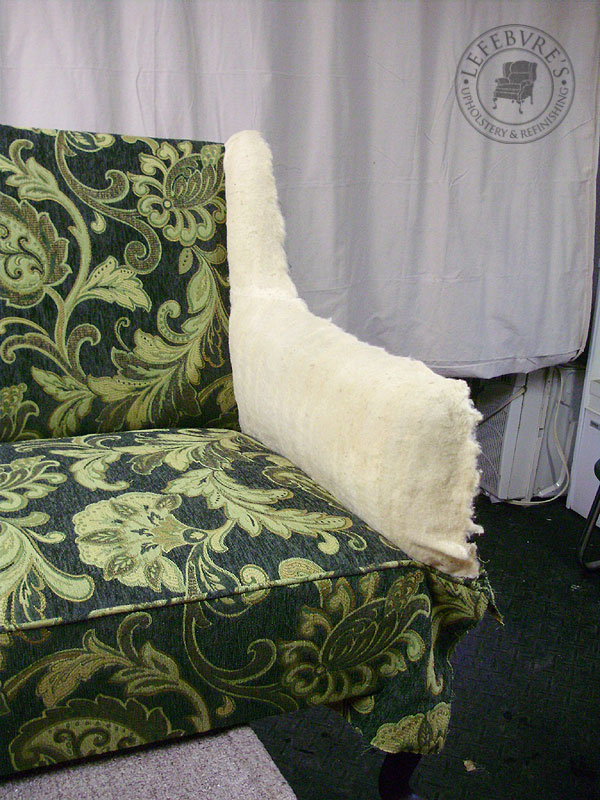 Patterns were cut from the existing old covers (beige stripe ones) and used on the rough covers as "test fitting" since they don't need to be 100% perfect. This is prior to nipping and tacking them in place. 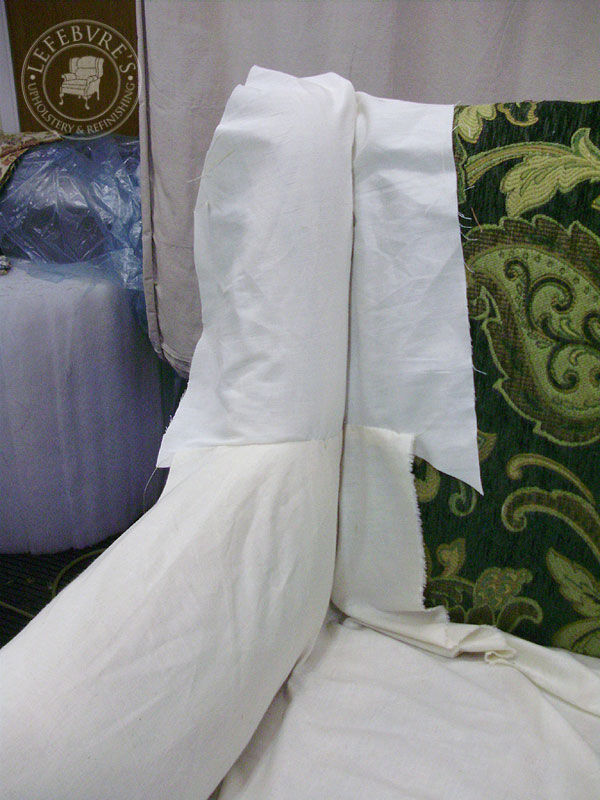 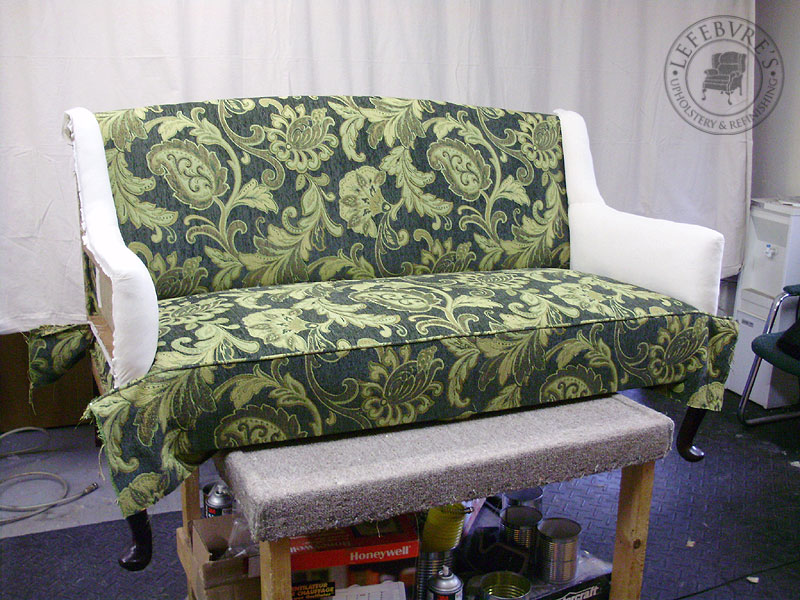 Some adjustments were made to the patterns, and applied to the finished arm panels. These are also made of 3 pieces (top "wing", piping, and lower arm). These were matched and mirrored for height, but not matched with the back panel (which I could have done if I were super picky, and if I had a lot more fabric to work with). Additionally, the top wings were loosely matched with the arm as best as possible (the arm end where it meets the wing has a large curve, so getting a match is difficult). The left arm has a near perfect match because of the large leaf pattern that flows well into the bottom piece, but the right one was harder to match.

Side note: the seat's front band had been only temporarily tacked, since the arms wrap around under it. 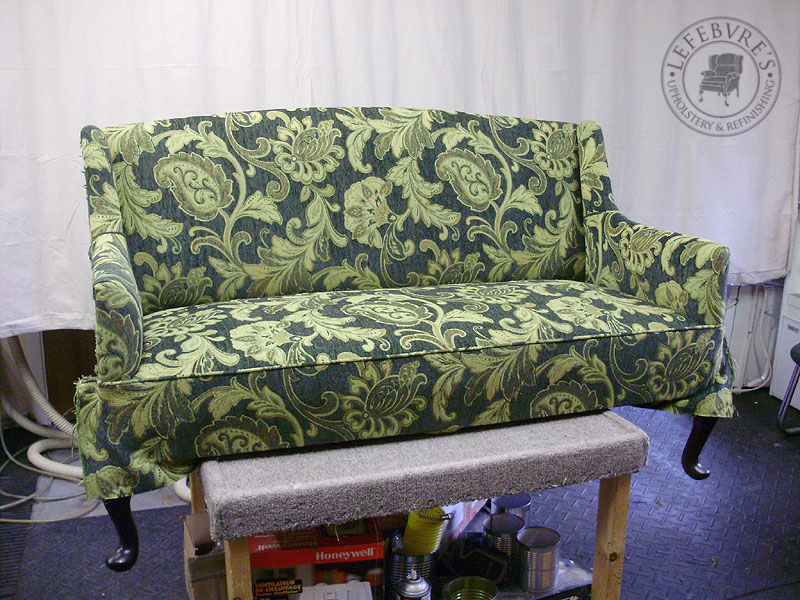 Finished inside arms, along with the finished front band. This shows the piping being installed around the perimeter. Side panel installed. Note: these are always tricky to install. There is a combination of 4 different fixing methods used on this single side panel:
- Cardboard "blind tacking" strip along the top horizontal section of the arm.
- Ply-Grip (a flexible metal edging) used along the curve of the wing top.
- Metal tacking strip along the front edge (basically a metal bar with nails in it, where the fabric is wrapped-over and tacked down).
- And a simple row of staples tacked down the backside of the sofa, as well as on the bottom edge. 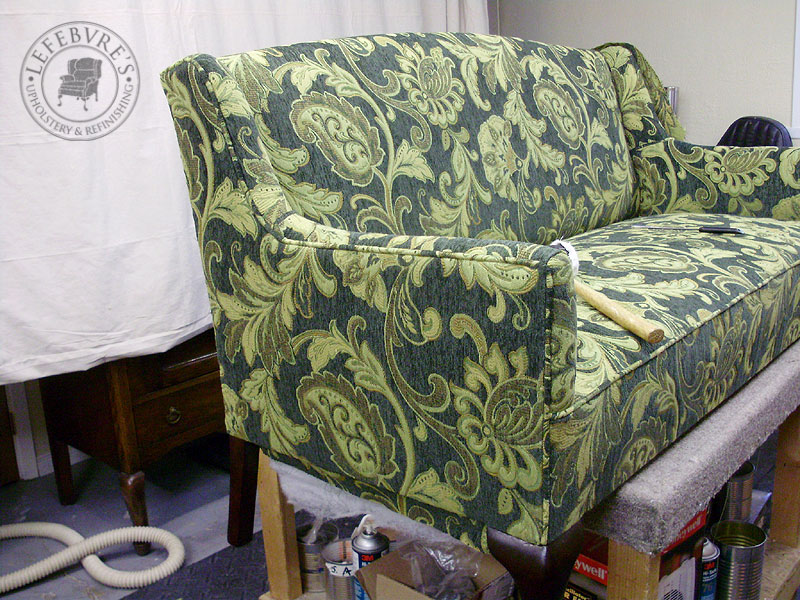 Next, the back panel. 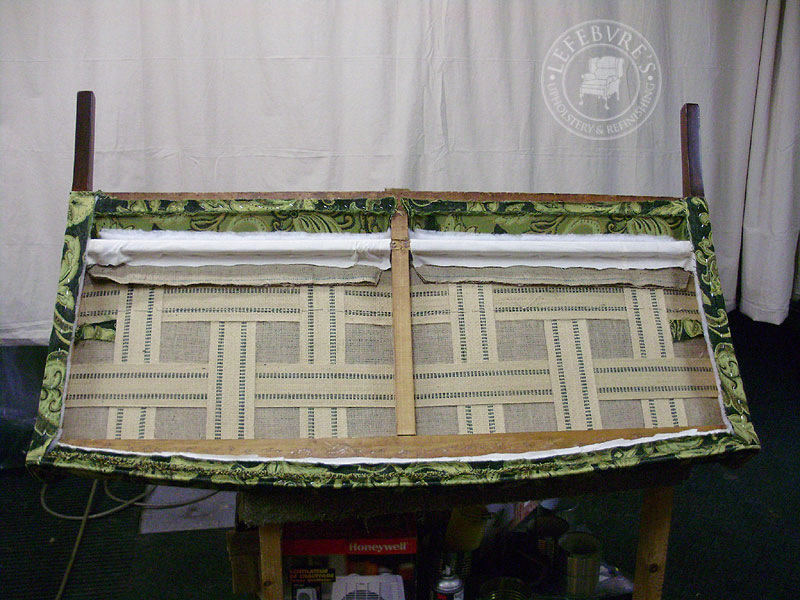 I wanted to stick with historic materials, so I used stretched burlap panels as a stiffener here. 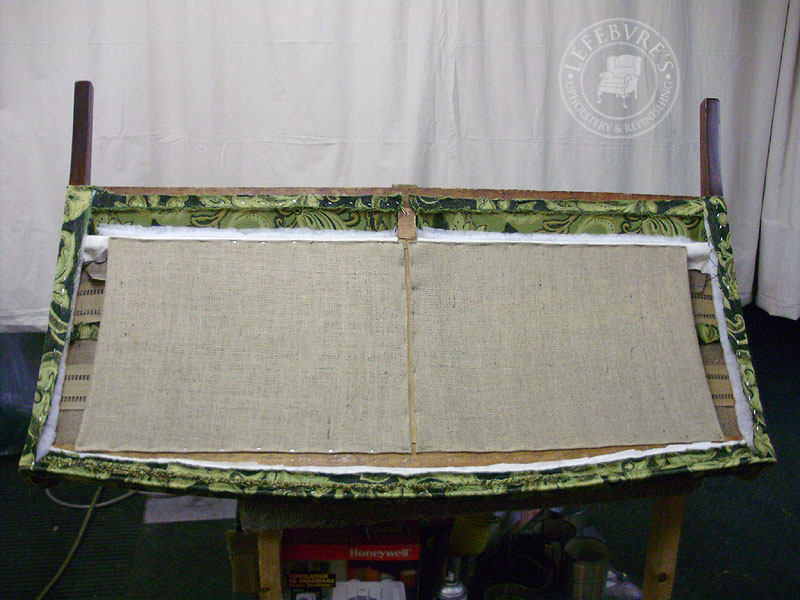 The shallow curve was carefully tacked using cardboard strips (along the top), and metal tacking strips on both sides. 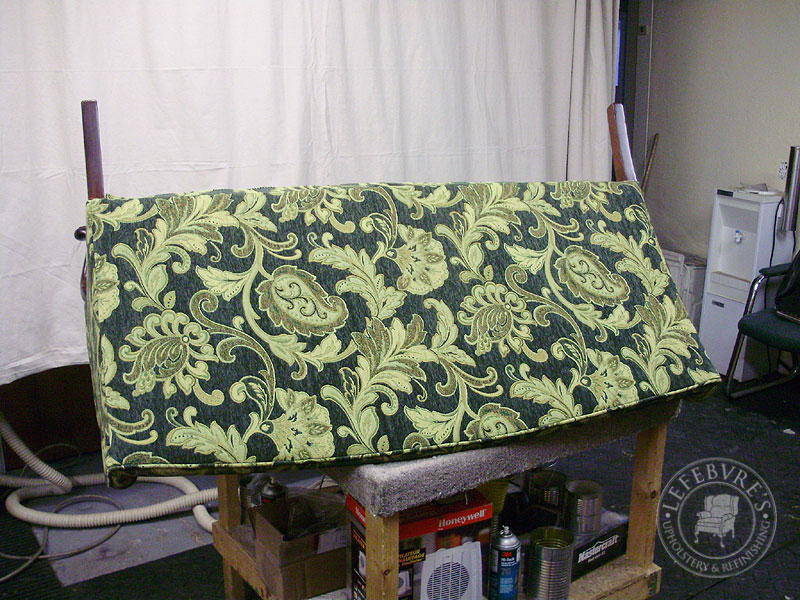 The last step was the bottom fabric. I used our "better" bottom fabric, which we use on our antiques, and hand tacked it in place. 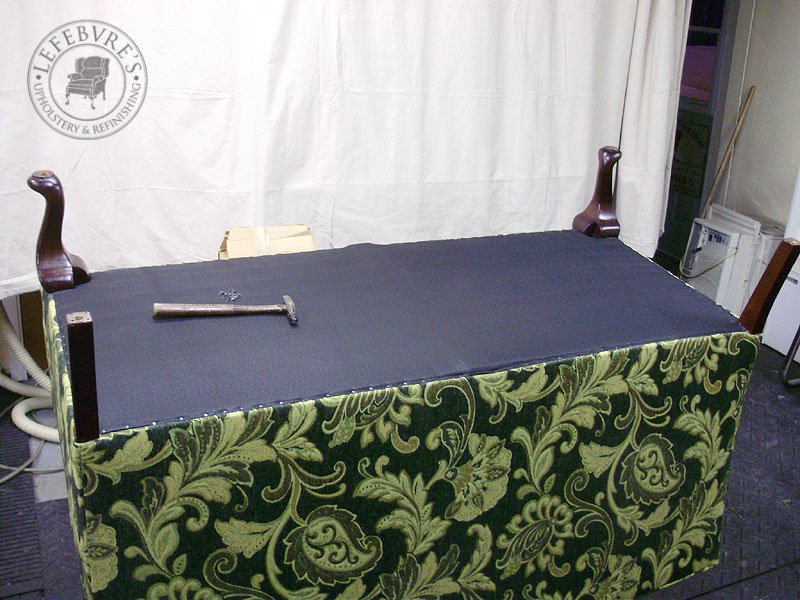 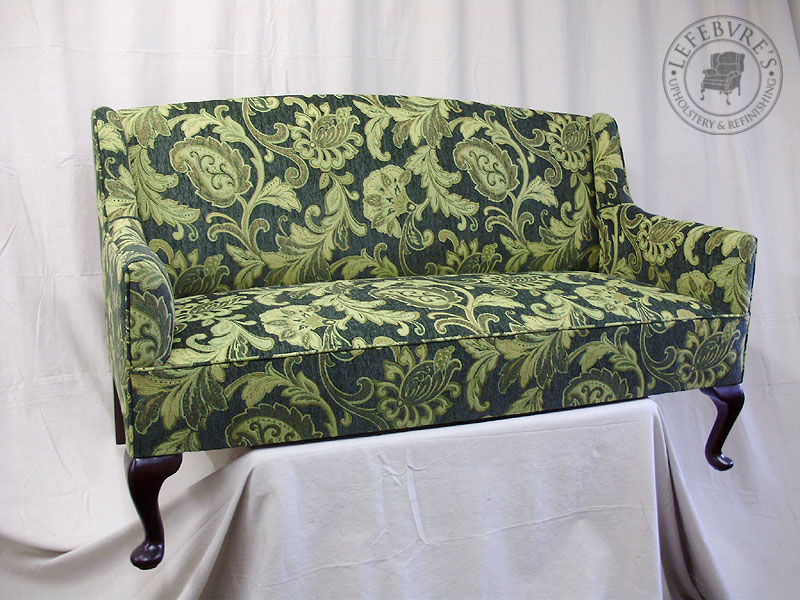 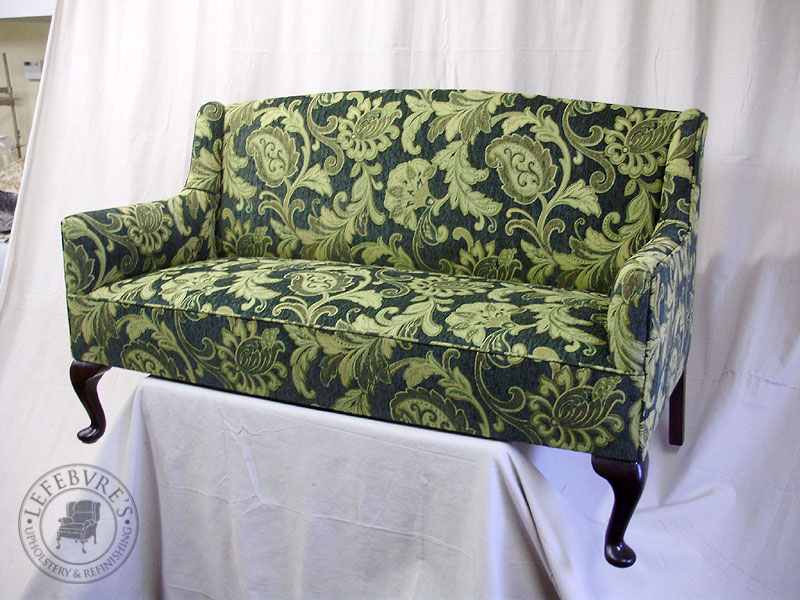 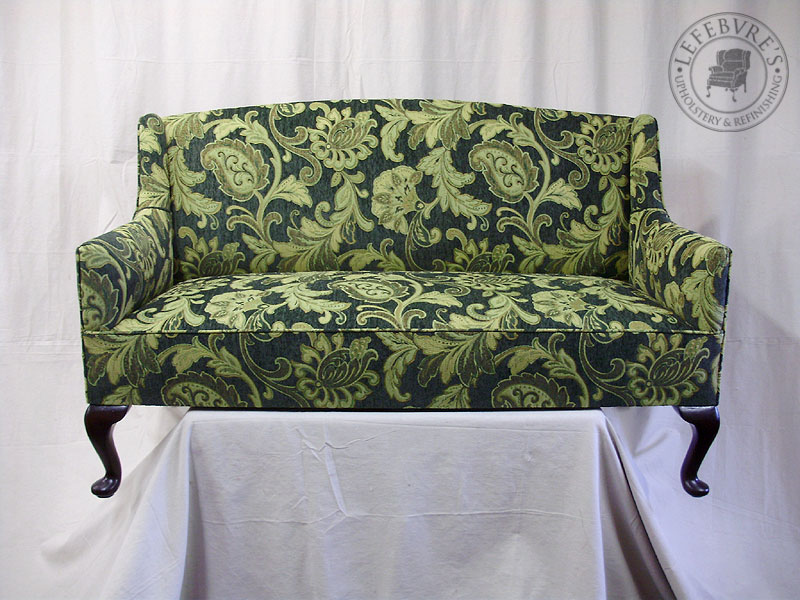 Finished sofa as seen in my living room (note that the colours from the shop above are closer to the actual colours, and they look darker/dimmer in my house photos below). 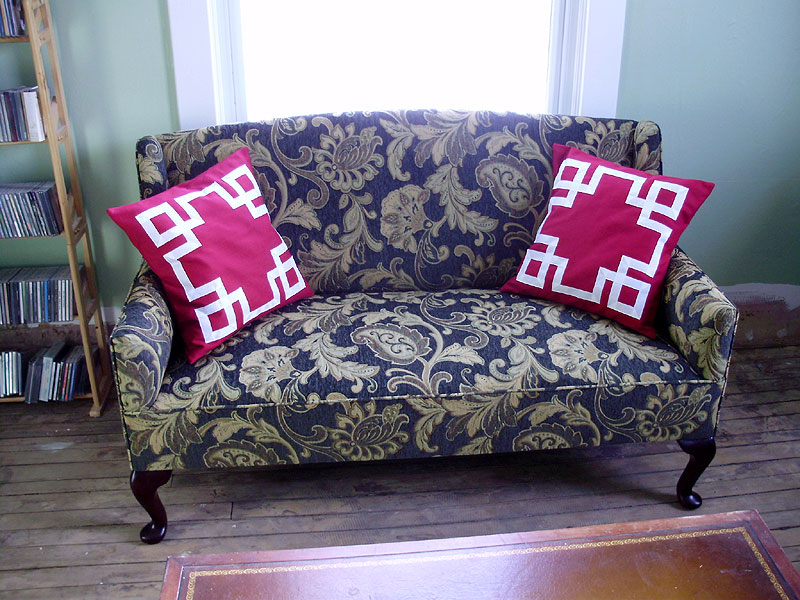 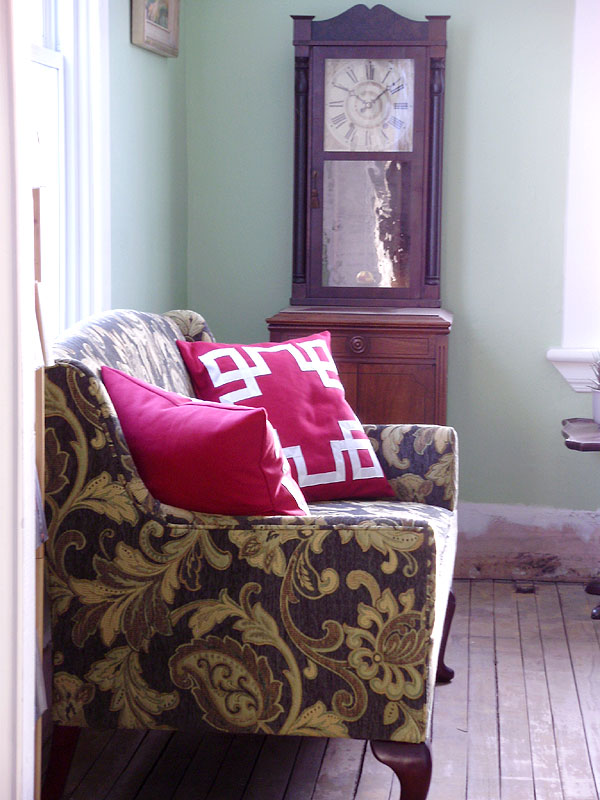