I had a pretty busy weekend these past few days.

On Friday we celebrated a friend's birthday and had a nice social evening at her parents' place.

On Saturday, I helped my friend Devin install a patio door in his back room. This job consisted of sawing a hole into the exterior wall where there was currently a window. When the previous owners had built it, it was supposed to have a patio door there, but they never installed it, and instead it had an awkward window. The window opening was the right size, and around the right height for the new patio door, so it was FAIRLY simple to install the new door. It still took most of the day, though. I took one or two "before" photos, but no "after" photo. I'll probably post one later on.

Here's the "before" with the window removed and part of the wall sawn. On the left is Devin, and on the right is another friends' father. Devin's dad also showed up a bit later and helped us out. 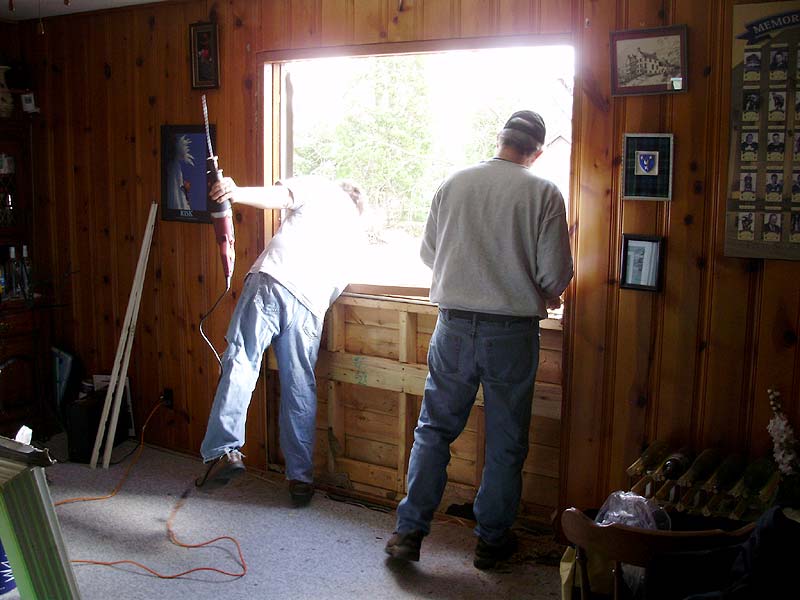 After the patio door was in, we got showered and changed, and left for another friend's birthday celebration, which consisted of a lovely meal at a nearby local restaurant, and then an evening at a bar for drinks/karaoke.

On Sunday, I returned to Dev's place to finish installing the mouldings around the patio door, and patch all the wall panelling, which took most of the afternoon. After we got done, I was invited over for supper with his parents. When I got back home, I was in a productive mood, so I installed all the crown mouldings in the Office, and caulked and puttied them. 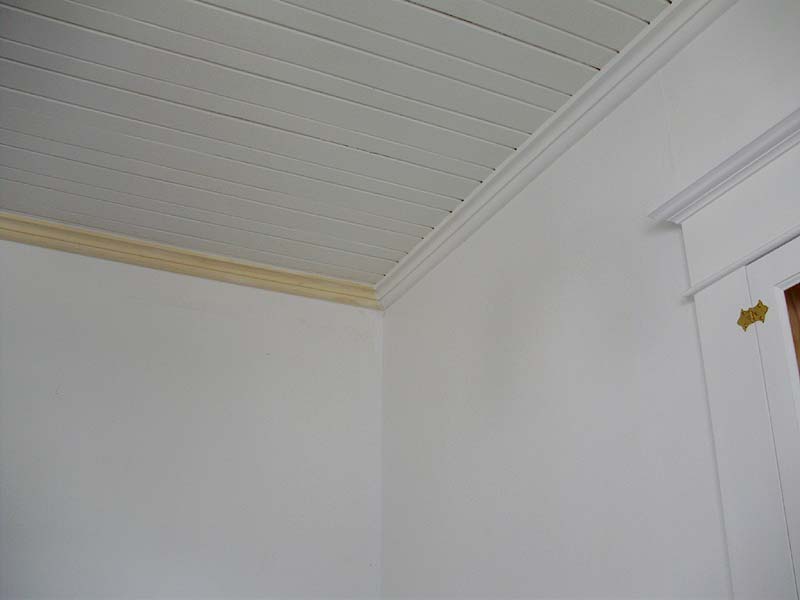 Note: I had to redo this entire corner seam, since the paper seam was literally peeling off the wall because it was so poorly installed. 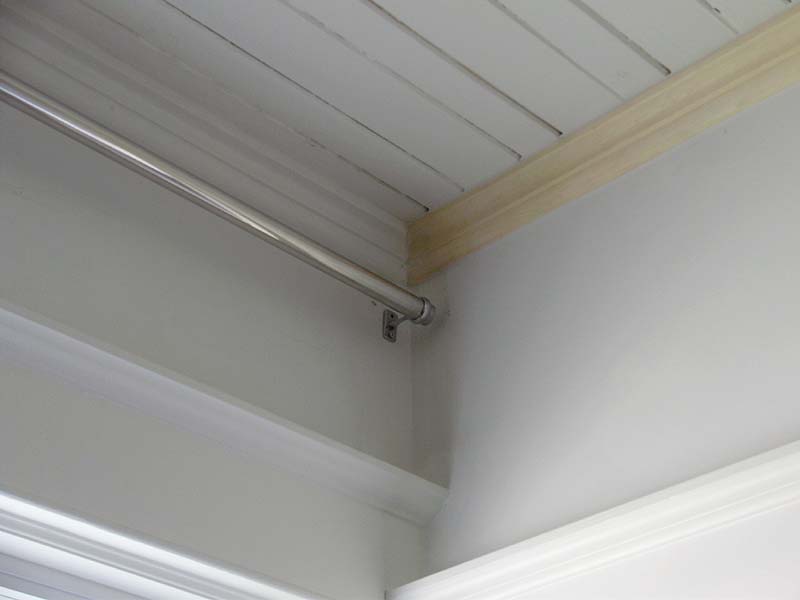 I'm incredibly happy with how the replacement crown turned out. It blends in seamlessly with the original. 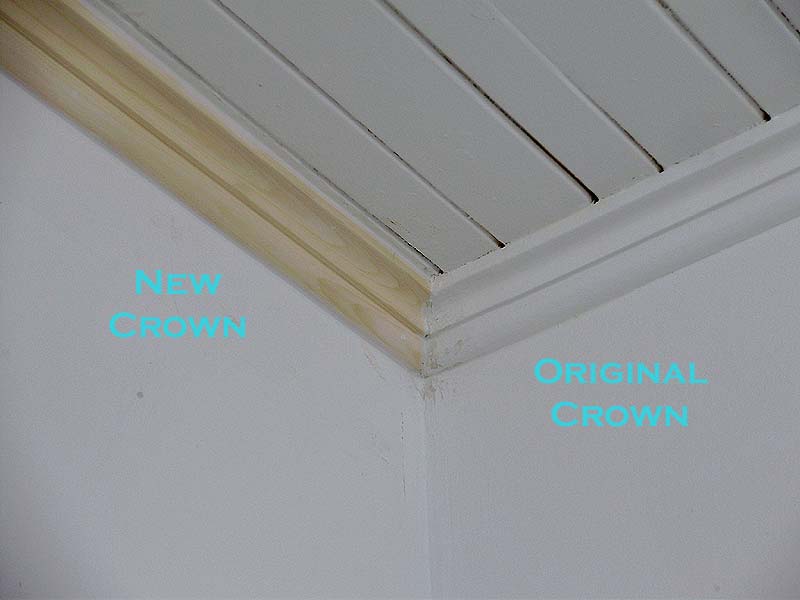 Today (Monday), I went outside to do a bit of yard cleanup. I started with just picking up a few fallen branches, and then I somehow ended up 15 feet up a ladder sawing a rotten limb on the maple tree. 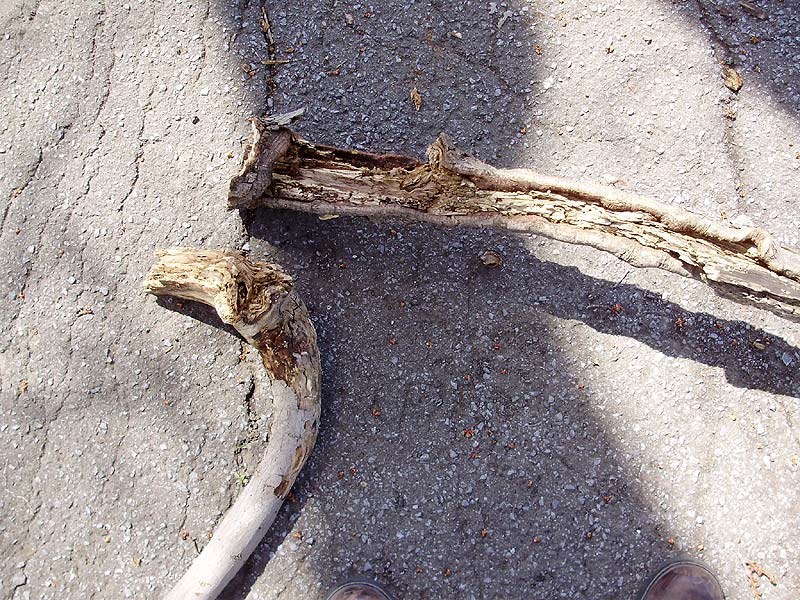 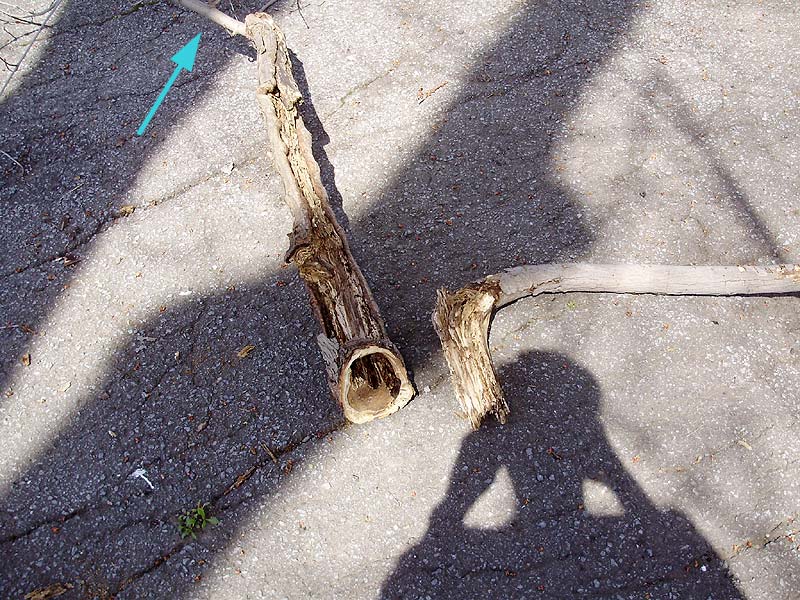 I thought this was going to be EASY, since it was a mostly dead branch, but as it turns out, it still had a live portion growing on the very end (see blue arrow), and most of the bottom of the branch was still VERY sturdy. It took me probably 10-20 minutes to saw that (I was using a hand saw).

Note, this photo and the next one were taken from my bedroom window, with the camera about 5 feet off the floor, to give you an idea of how high these branches were. 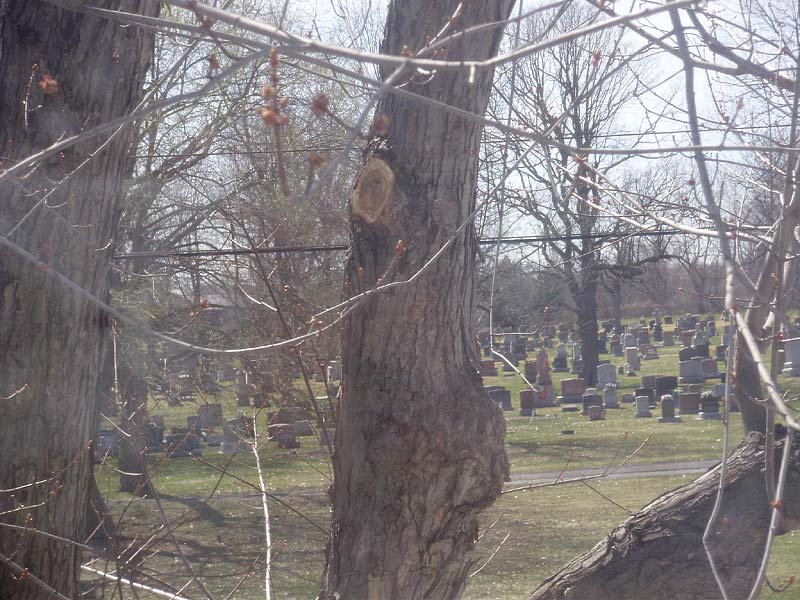 The bad stump that I really wanted to get rid of, however, was on the other trunk, and can be seen below: 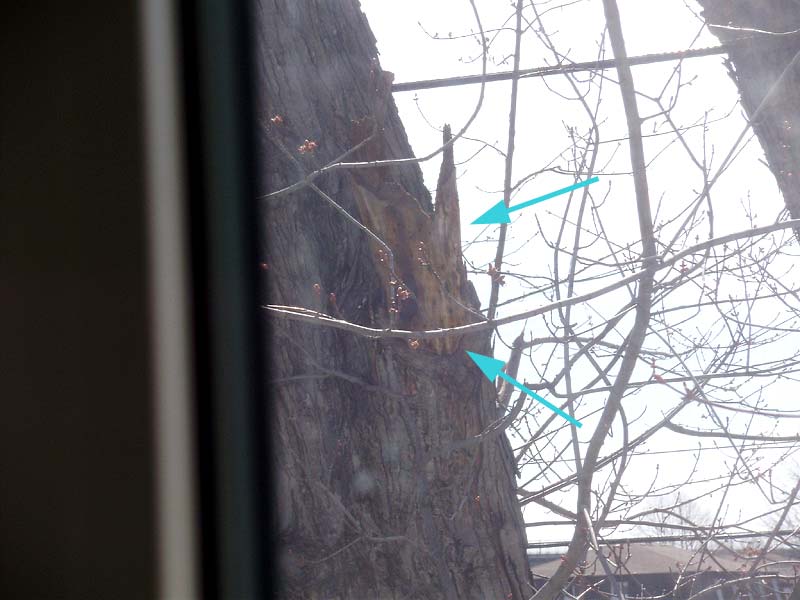 This is the remnant from that branch that had fallen down a few years ago:

I wasn't able to bring myself to get that high on the ladder. It's about 20 feet off the ground, and the ladder I've got is an old, busted-up piece of crap. That, and I would have needed a hatchet or a chain saw for this one (I have neither). I'm not too worried about the tree's health, but I'd definitely like to have that rotted stump removed. It's infested with bugs/holes and I'm sure it's not doing the tree any good.

I also got some help from the landlady* next door, who was there to do some cleaning-up and checking on the building. She was there with another man, and they cleaned out a lot of the junk in between the garage and my other neighbours.

* She also informed me that my chimney has been shedding bricks apparently, which isn't surprising, considering the atrocious shape it's in. She was concerned that I'd need to fix it, but I told her I'd be removing it completely.

The branches I trimmed, plus the ones in between the houses left me with 2 full trash cans. 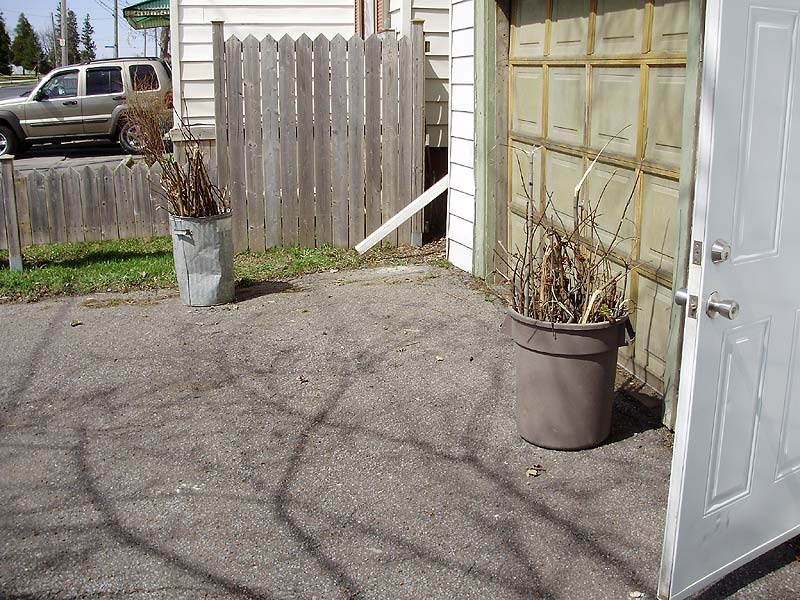 Another quick repair was FINALLY getting around to patching this extra hole in the foundation. It looks like a hole for a PVC pipe (same as the other 2 next to it), and it does go all the way through the foundation, but for some reason they didn't use it, and it was patched only on the inside (a few inches deep) with just a bunch of wadded-up plastic bags in the hole on the exterior.

Rather than fill the ENTIRE cavity with cement (which would have been hard, since the foundation wall is something like 8-10" thick), I removed the old bags, and re-stuffed the middle cavity with insulation. I patched the last 2 inches with hydraulic cement. If I ever need that hole again, it should be fairly easy to drill it back out. 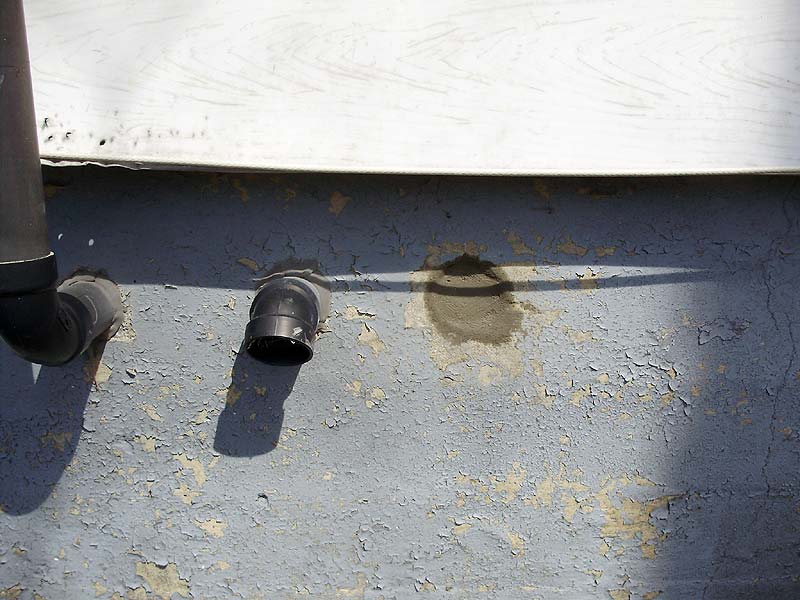 I also removed this ugly/useless metal bracket on the side of the house (same wall as above). I have NO IDEA what it was for, or why they left it there, but I wanted it GONE. It was just a strap with 2 L shaped hooks on each end pointing upwards. You can see it in the "fallen limb" photo a few pics back. It was held in place with 2 large square head bolts (top one was loose). The top "hook" was in the way when they did the siding, which is why there's a notch in it now. I managed to carefully undo the bottom bolt, and I patched the hole with cement, since I had a bit left. 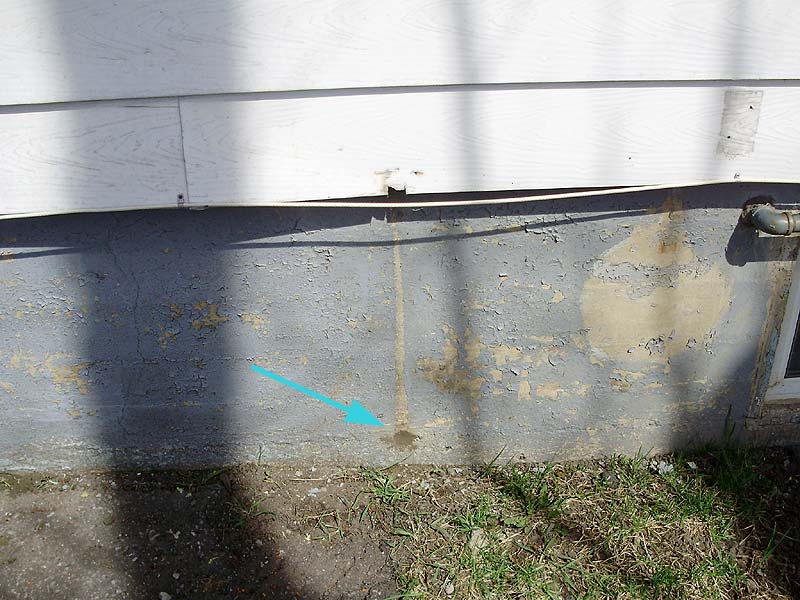 A few hours later, I made a trip to Home Depot for wood/mouldings so that I can recreate the missing piece to go under the built-in (the bottom casing) in the Office. I'll also need one for the Kitchen built-in (which isn't even made yet, or 100% decided) but I got enough wood for 2 pcs.

Oh, and I also did another coat of drywall on the last Living Room drywall corner (so that I can get it done, install the crown, and then paint all the trim (since it will need shellac primer, and I only want to do that ONCE).