I realize it's very late, and I *am* headed to bed in a few minutes, but I thought I'd share my next project.

Earlier this afternoon, I worked some more on the office curtains, and I'm not at all happy with the results, so I am sorta abandoning that for now (until I decide how I want to fix it).

Instead, since I have the kitchen table all laid out for painting (ie: clean, with nothing on it), I've chosen to finally cross another long-awaited project that's been sitting around since summer 2011 off my to-do list.

CAN YOU GUESS WHICH ONE?

Here's a hint: It's a cabinet that's currently in pieces in the dining room.

Still not sure? It's the gramophone/radio cabinet that my Dad gave me. Remember this thing? Last time you guys saw it, it was literally "ready to varnish" and it's been that way since summer 2011. The only reason it never got done is because I hate this part of any cabinetmaking project - the finishing. Especially since I have to do it all entirely by hand. Like... with a paint brush. Yeah...

Well, since it's been sitting around SO FREAKIN' LONG, I've moved it around, it's COVERED in dust, and I set down a dirty paint brush on it while I was working on the crown. OOPS!

To remove the white paint out of the wood, I used my knowledge of chemistry (as far as household chemicals go - since I have a ton of them) to remove the latex paint. Generally, getting paint off of wood is not easy. The strongest chemical would be lacquer thinner (which will actually strip paint and varnish if you're not careful), but I didn't want to remove the layer of stain on the cabinet either. The second strongest choice would be acetone, but it, too, might screw up the stain. What I ended up choosing is simple alcohol. Here in Canada it's Methyl Hydrate (methyl alcohol - or ethanol extracted from wood), and in the USA, you would find it as "Denatured Alcohol".

Alcohol will easily melt latex paint (even fully cured paint that's been on your walls and fully dry for over 5 years - ASK ME HOW I KNOW). But it's gentle enough, and not quite compatible with the oil based stain, so it was the best choice.

Well that was overly lengthy for nothing. Now it's already 2:16...

Here's the paint splatter half removed (you can just barely see the dull outline of the "wet spot". 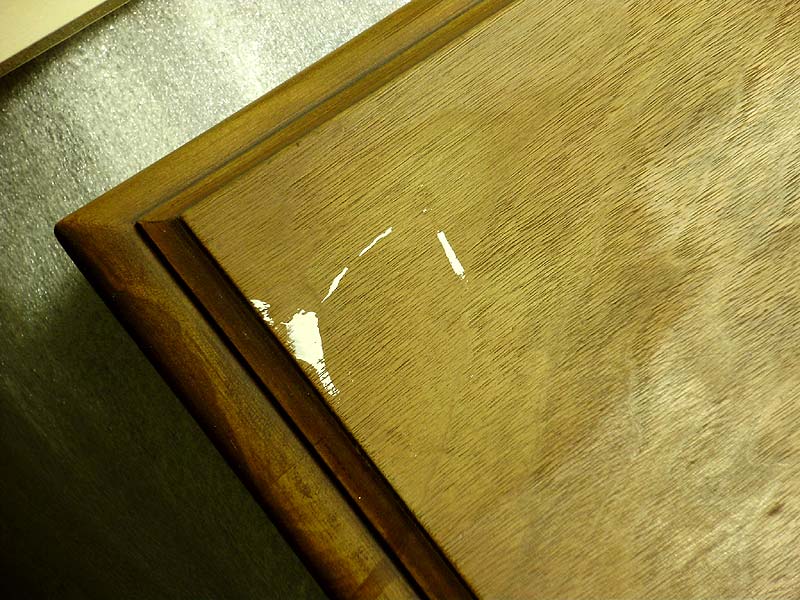 With the stain fully removed - even from deep in the wood grain, using a wire brush, I then put a very light coat of the same stain to blend it.

While I was at it (staining), I also had to stain the new back board for the cabinet. The old one was ok, but my Dad had made huge holes in it for wires when he was using it for stereo stuff, so I opted to replace it altogether.

Here are the parts being cleaned and readied for varnishing (new back under the fancy door): 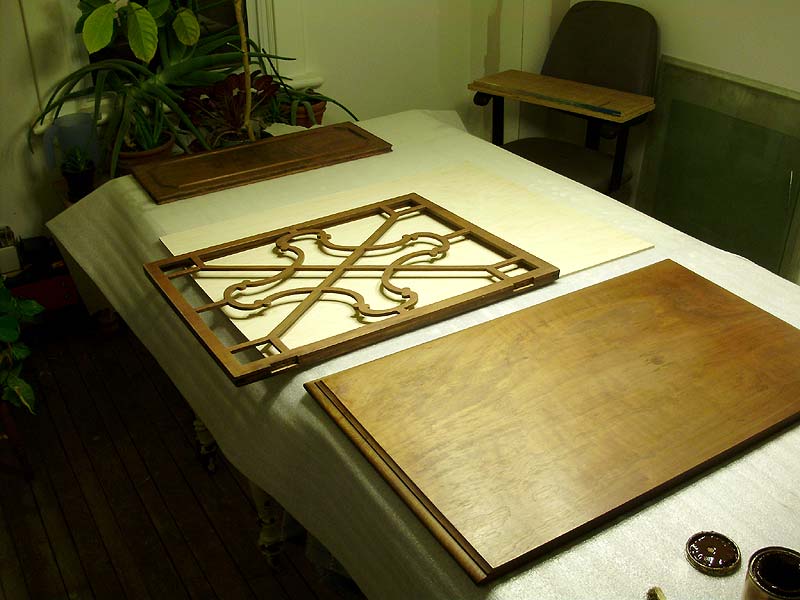 And the new back stained (so that it can dry overnight). It's a hair lighter, but it won't be noticeable: 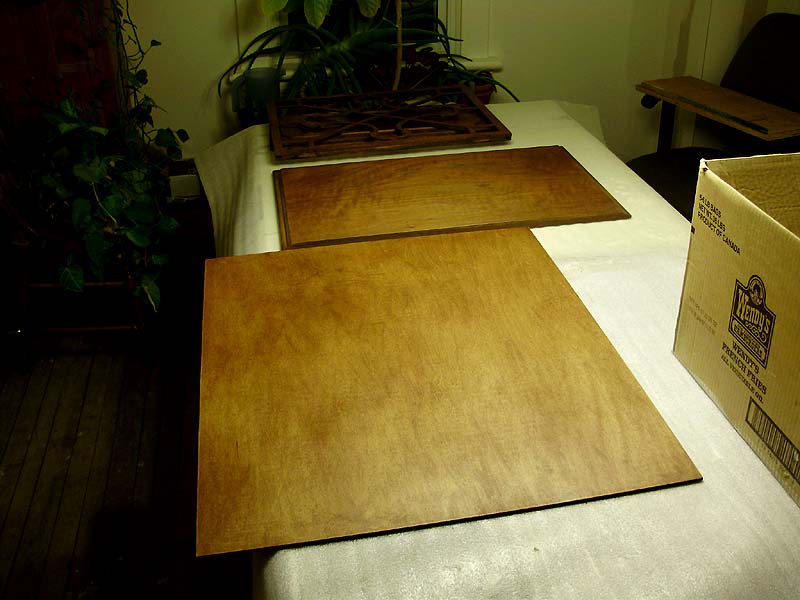