PAINTING! And How to Install Crown Moulding by Yourself!

I put a coat of BIN (the shellac one which is super runny) all over the pine trim (all the crown in the hallway, all the crown in the dining room, and several pieces of random trim like the left hand side of the living room casing, the ones on the office built-in, etc).

After that, I did a regular primer (I use the super cheapo contractor grade stuff from Home Depot at 15$/4L can) on everything. I did the guest bedroom trim, the living room doorway, the dining room arch, the office built-in, and all the crown (hall and dining rooms).

I didn't do the trim in the "L Room" bedroom, since I still have a few baseboards and all the caulking to do. While I was at it, I marked-off all the spots (throughout the whole house) that will need touch-ups. Things like door casings that got scuffed or dinged.

A quick "how to" for installing crown moulding (alone):

I decided I did not want any joints in the crown, so I bought 16 foot long lengths of clear pine crown. The price was actually pretty decent at 2.99$/linear foot.

Because this is an old house, I decided to use coped corners for all the interior corners. The original crown in the other rooms (what little remains of it) was done with just regular 45 degree mitres, but the house has shifted and settled so much that getting perfect angles would be a total nightmare.

Another reason to do coped corners is because I don't have a mitre saw. Yup, you might be surprised that a "highly skilled professional cabinetmaker" doesn't own a mitre saw, but there's a reason. I don't really want to get a crappy one, and the one I want is 800$.

That said, ALL the crown was done using only these two saws: 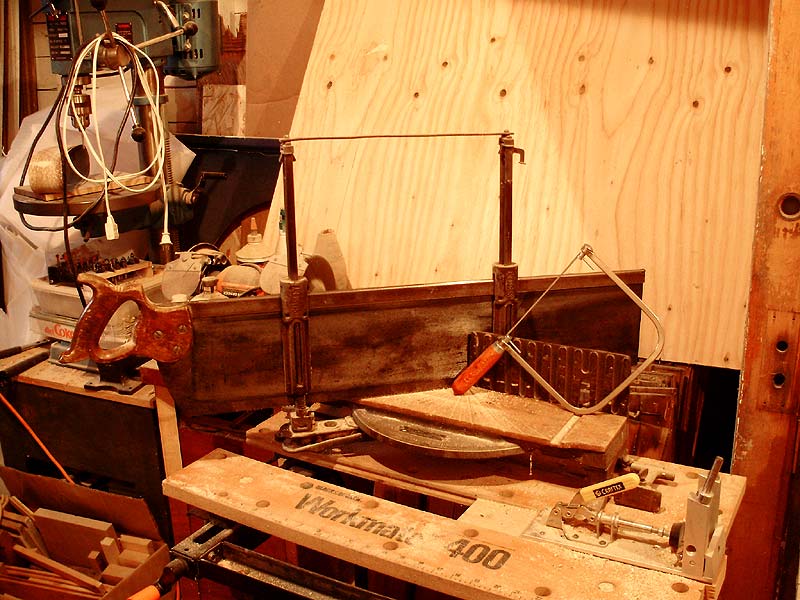 The old mitre box is actually a very well made Stanley that's probably as old as the house (a very nice yard sale find), and the small coping saw is also just a yard sale cheapie. I actually have a much better quality one (or 5) but I'm not sure where I put it, so I used this one (which doesn't hold the blades very well).

The only other tools I used for the crown were very basic ones: pencil, stud finder, nail punch, hammer. I also cut some of the pieces to length with a Japanese Ryoba saw (Google it, they're awesome!).

I'll also add that although I'm very skilled at installing trim (mostly from having installed tons of it through work doing custom kitchens/baths), this is actually the first time I do coped joints. They are tricky, but give very nice results.

Step 1: Cut the longest pieces FIRST. I started with the long wall. Cut the ends square and flush at both ends.

Step 2: Attach your first piece starting in the centre. This makes it easier to handle. 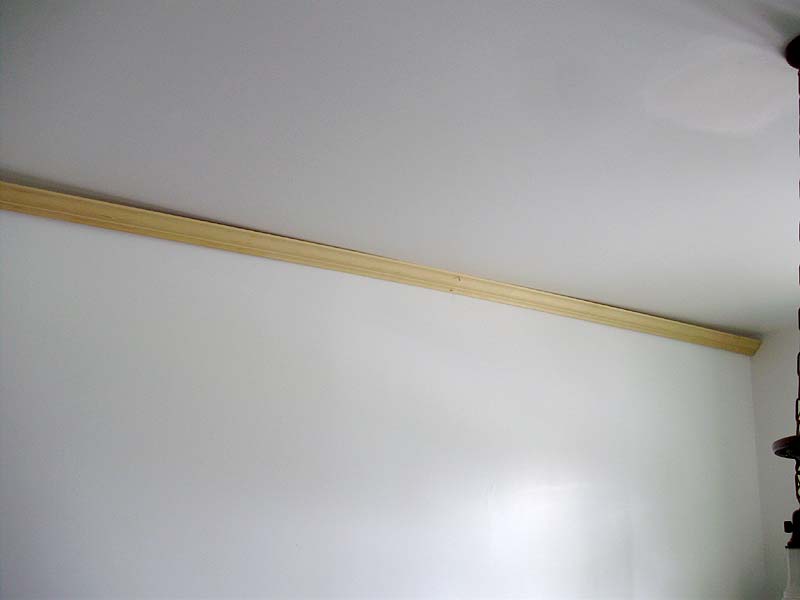 Work your way to the ends, making sure that your crown sits properly squared with the wall/ceiling. I used overkill 2 1/2" spiral nails (which is what I used for all the door casings, baseboards, etc), but you can use a brad-nailer, or shorter regular nails. Just make sure you hit solid.

On my main interior wall, everything was nice and straight, so I only nailed it every 2 studs. If your walls are more uneven, nail it wherever it's needed.

Step 3: Once your longest piece is in place, continue with your next piece. If you're working in a plain rectangular room, the easiest method would be to do one full piece, then go around the room in a circular fashion. The second and third boards would have one cope and one square end, and the last piece would have a cope at both ends. Note: If instead, you did two full boards on opposite walls (with double square ends), you would then be left with two boards with double coped ends, which are harder to get "just right". If your room ends with an open wall, start at one end and work your way around. Don't start in the middle. It's easier to adjust your angles as you go around the room. If your crown needs to end abruptly, do a return. If you're not sure what that is, look up photos, but basically it's like the crown turns to end into the wall.

When installing your second board, you can't start in the centre, since you want a fight fitting joint at your coped corner. To hold it in place (as an extra set of hands), use two nails. The holes will be covered with caulking later (unless you're using pre-finished wood mouldings). 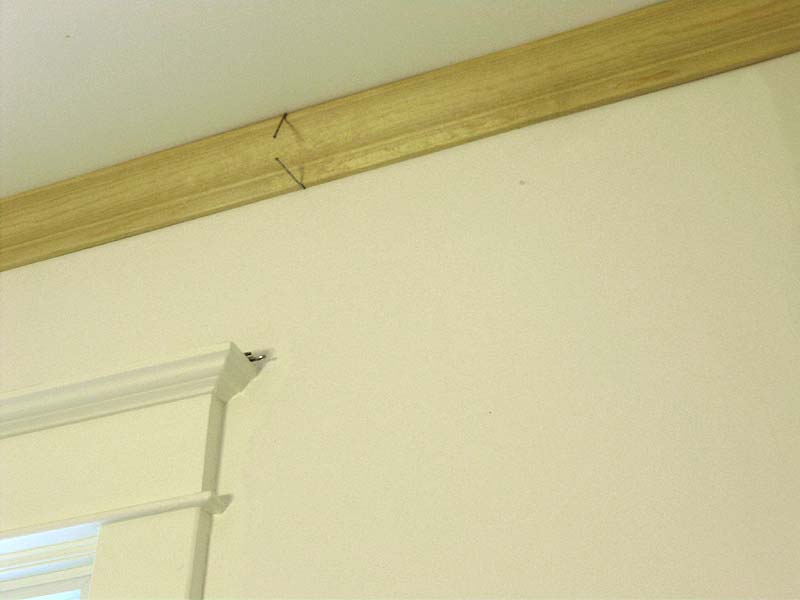 The two nails will allow you to slide the crown around and position your corner nicely before nailing it in place.

In my dining room, I had 2 corner walls, so I used short ends to make these, and used a cope in the interior corners and a mitre on the outer corner. Make sure to glue the outside corner. This is the spot that must look the best and most accurate, since it will be highly visible.

Below shows my "crappiest" corner (on the upper right). You can also see a bow in the wall on the left, and a wedge shaped gap on the right. These are fairly small and were filled with caulking.

Once the glue on the corner is dry, putty and sand it carefully to end with a nice crisp profile. 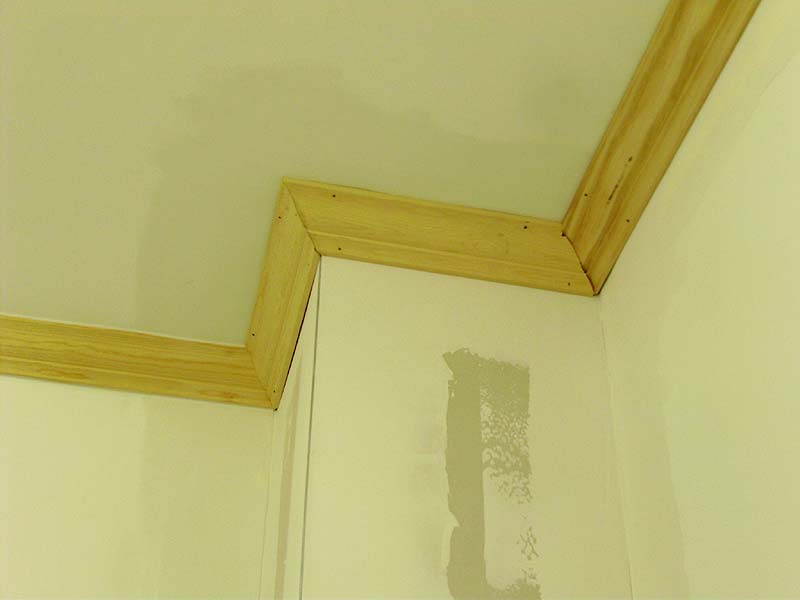 This shows the other corner, which had a different problem. The ceiling slopes so much in this spot that I had to use a shim (and extra caulking) in the upper left corner. I could not get a good joint otherwise. 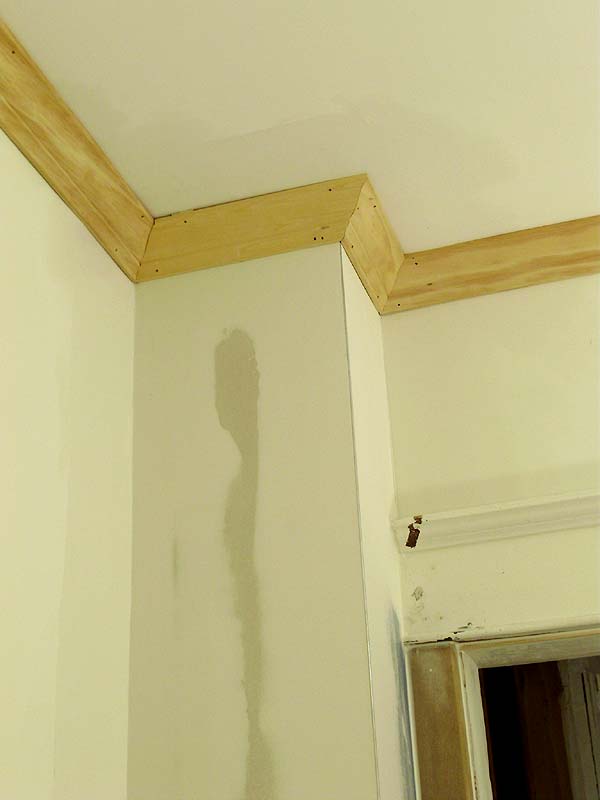 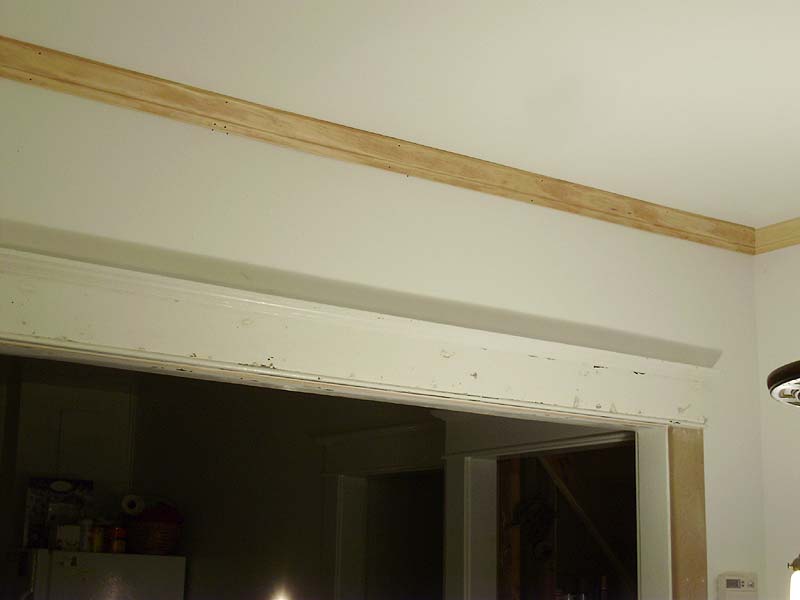 Yesterday I finally decided to pick a colour and refinish one of the two remaining pan fixtures (the one for the "L room"). It came out quite well, and I'll probably do the exact same finish on the other one for the staircase.

Here's how it will look (light fixture & shades for "L Room"): 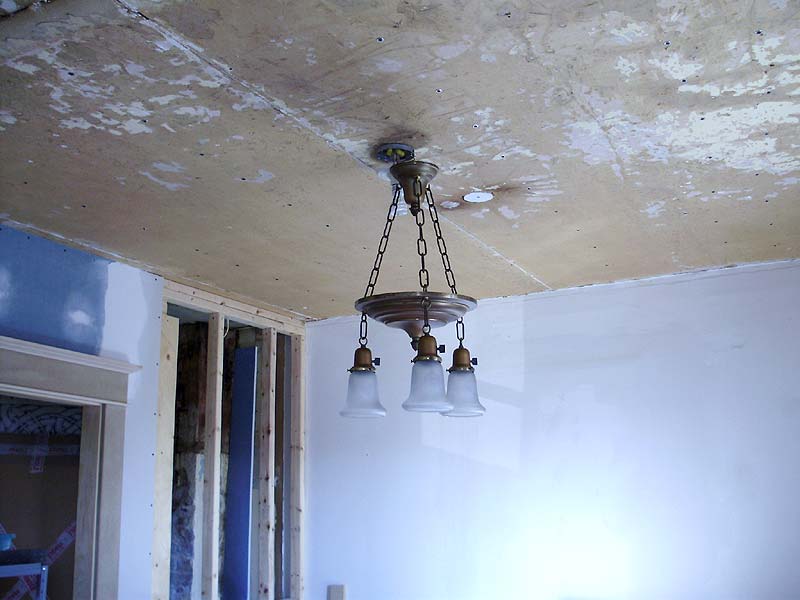 Basically, I was trying to match the original paint on the shade bells (which were not originally with this fixture), but the paint is nearly impossible to match, so this was as close as I could get, using 3 different colours. It was also a challenge to keep some brass "rings" w/o paint to match the look of other original fixtures, but I found a trick to do this.

I'll probably be adding paint to the bells to get a better match.