I have several posts (8 of them) ready to share over the next few weeks, and I will try to space them out every few days so that you don't get everything all at once.

I will be going back and forth between posts relating to the dining room ceiling I'm restoring (in my house), and the Victorian farmhouse posts.

In order for me to be able to repair the dining room ceiling, I'm going to need to make a bunch of patches in the woodwork. Some of the damage was due to plumbing or heating vents, new electrical, and rot. I could make new boards to patch the missing ones, but the originals are alternating width tongue-and-groove boards in solid birch with beveled edges. I do have some router bits to make something nearly identical, but it would be very time consuming. Instead, I still have the existing chimney cupboard that is in the kitchen, which is made from the same boards. The plan is to eventually demolish and remove the entire cabinet and chimney, so for now, I just scavenged the exterior wood. This is how that went.

The first part to be removed was the wooden box covering the electrical wires that go up to the attic for all the upstairs electrical. This box had been made very sloppily from rough wooden boards. 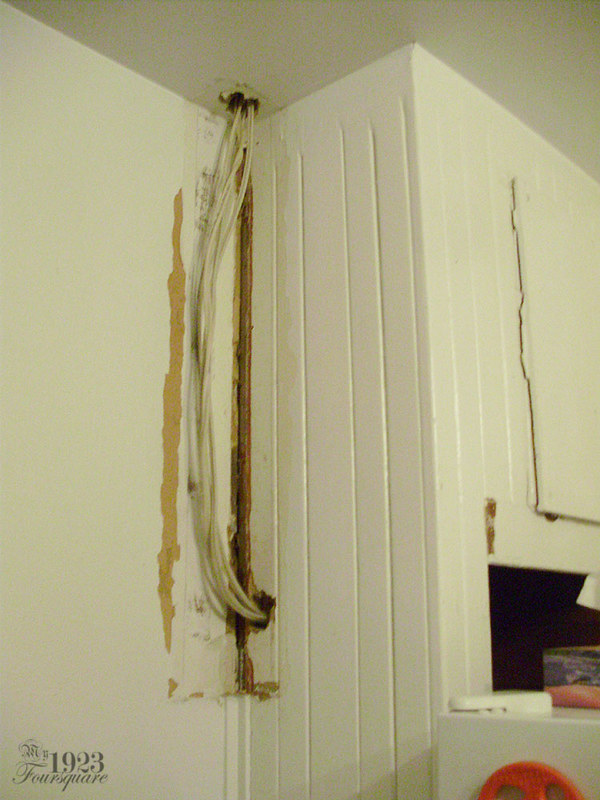 The next easiest board to remove was the long vertical corner board. It's at this point that I found out that this demo job was not going to be as easy as I thought. The cabinet appears to have been built BEFORE the ceiling tongue-and-groove boards were installed. This means that the boards go up into the ceiling about 6 inches, and they are nailed up at the top on a 2x6 or 2x8 beam that goes across the top of the chimney (where the floor is nailed around the chimney above). Because of this, there isn't a lot of room to wiggle the boards, or the lever the boards to free them from those upper nails. 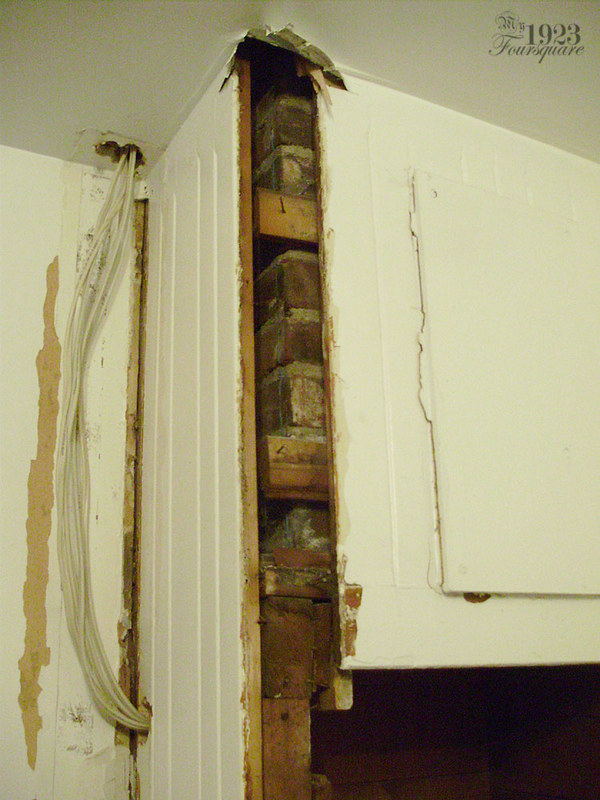 Eventually I was able to get the first few boards loose, and for the rest of them, I was able to slide a hacksaw into the gap and cut the upper nails.

I didn't want to see the packed dead leaves and sooty debris in the chimney opening, so I stuffed the hole with insulation. You can start to see how the chimney cabinet was framed and assembled. 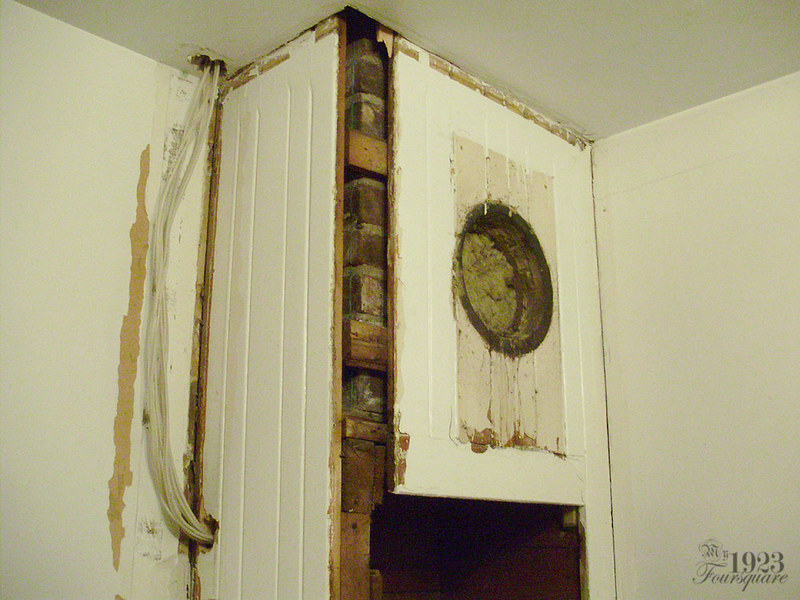 Long boards removed. You can also sort of see how the chimney is partially inset into the exterior wall. The chimney is 2 bricks deep (front to back), and 2 1/2 bricks wide on the front. In the photo you can see 1 1/2 bricks wide, with the other ~4" of brick within the outside wall. It's kind of an unusual setup. I assume that the chimney sits between two exterior studs, which have a 24" spacing between them. The framing for the cabinet is basically two rectangular frames that act as legs, plus a shelf on top. 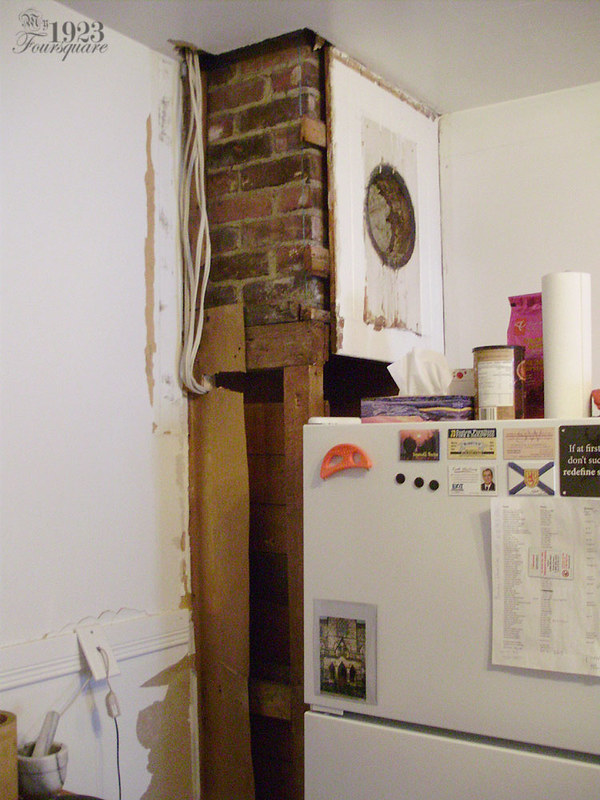 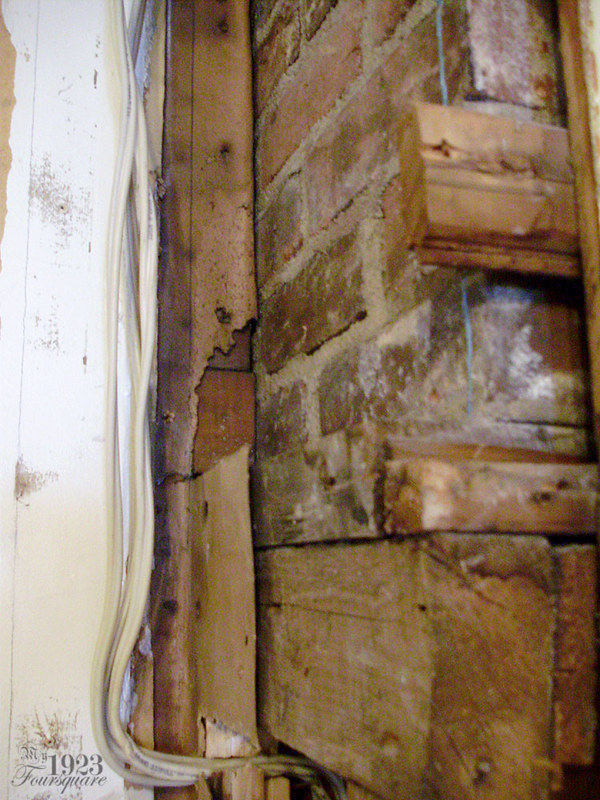 Front boards. There isn't a whole lot of wood to save on these pieces, but they will need to come out, and sometimes I only need a very small piece. 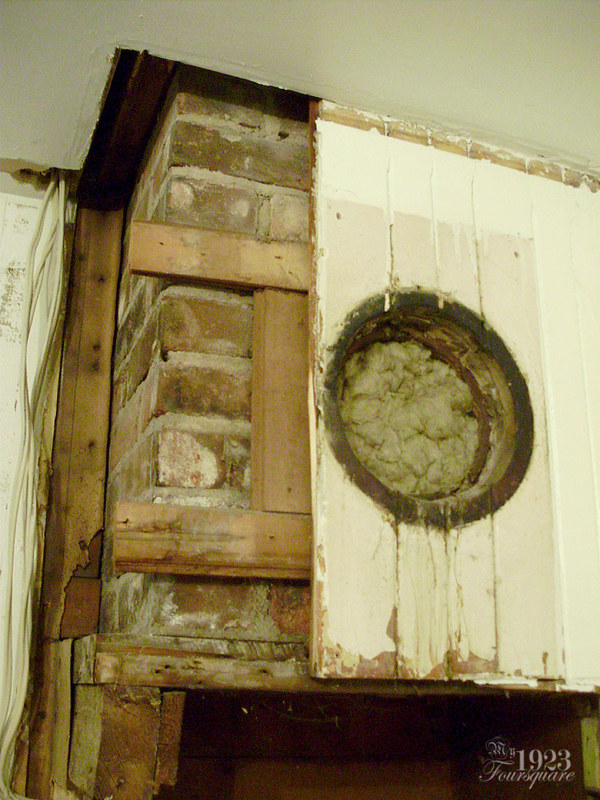 There was a 3/4" gap between the cabinet front and the metal ring in the chimney opening. It was filled with some kind of hard white putty. It almost looks like plaster of Paris, but plaster of Paris is usually pretty liquid when you mix it, and this looks like it was pushed in the gap in thick blobs. 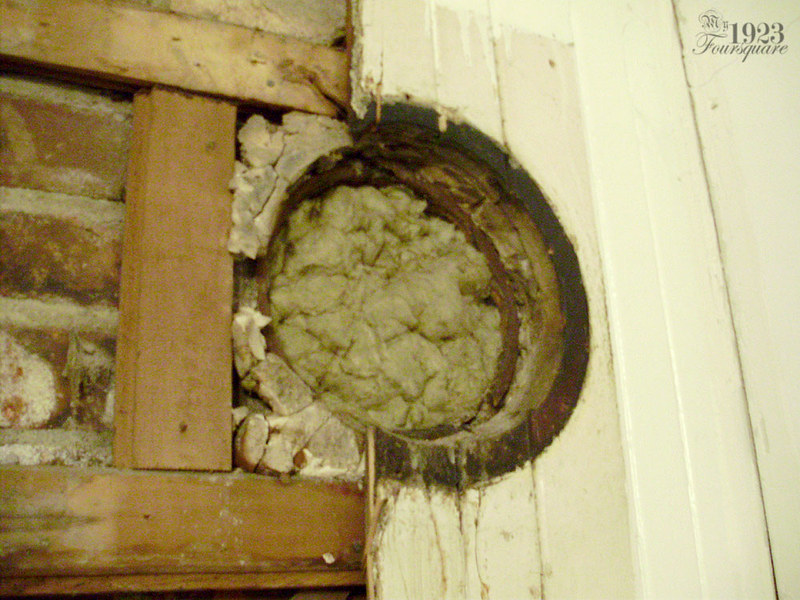 I ended up leaving that last board in place for now. Most of the edge on this side is no good because the groove was cut off to make a flat edge. It's also nailed all along the edge and the drywall is going to make it hard to remove for now. 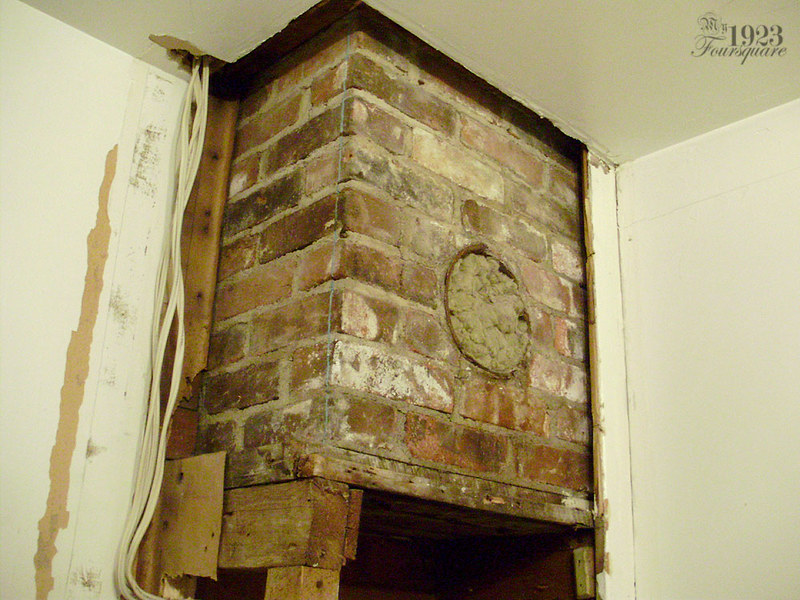 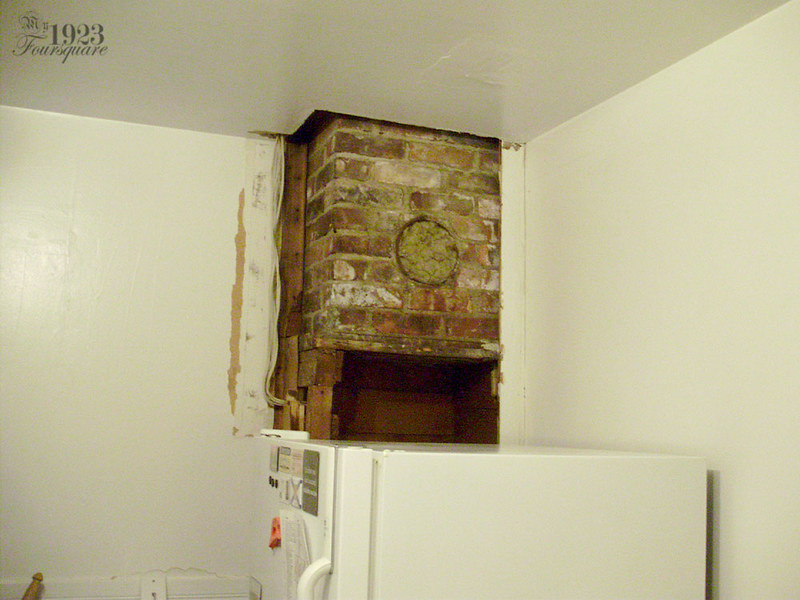 The chimney lands flush with the interior centre wall (along the right side). 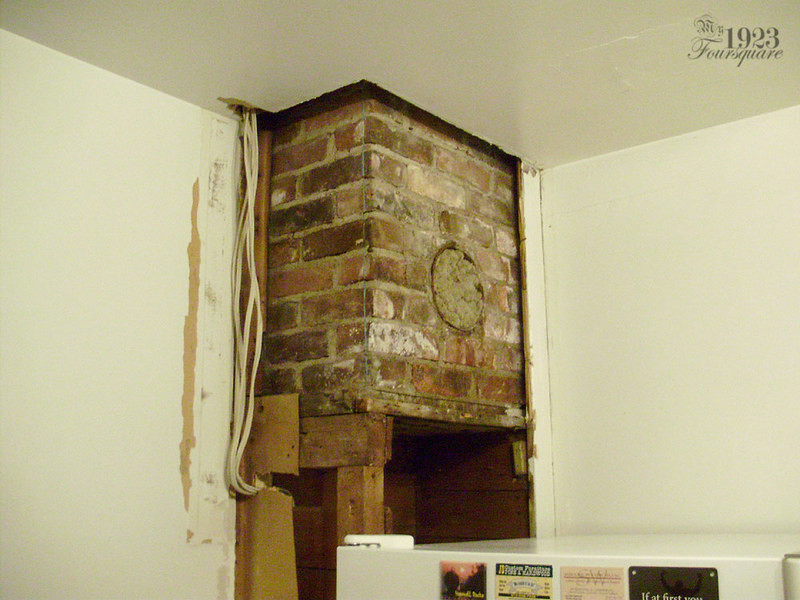