So the dining room ceiling project has kind of gone off the rails and spiraled into "hellish pain in the ass" territory. When working with old painted woodwork or walls, I tend to give the advice "don't pick at it", but sometimes I don't follow my advice. On this particular job, I HAD to at least chip off the unsightly chunks of paint in order to be able to do a quick patch job. I was originally just doing this near edges and in the V grooves. The plan was just to clean up the ceiling and then patch the chippy edges of the boards.

A preview of things to come... 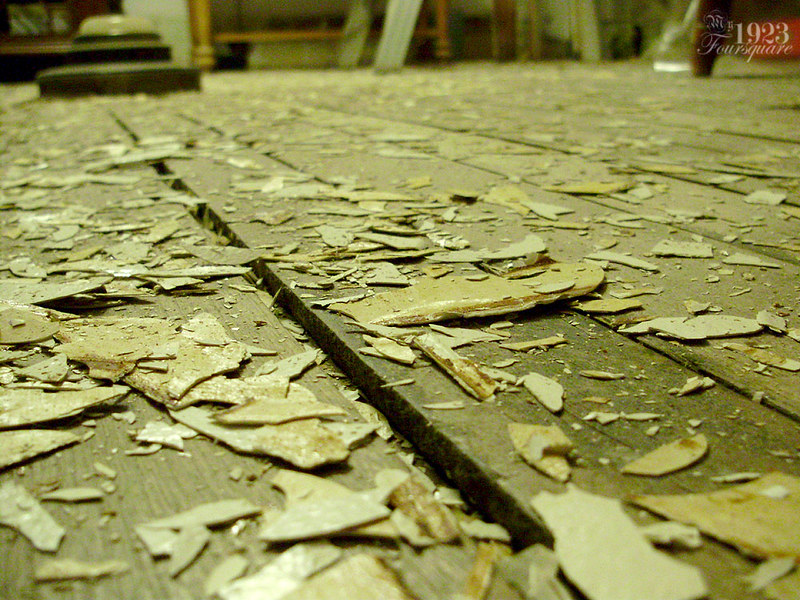 Unfortunately (or maybe fortunately? you be the judge) I ended up chipping off a big section of one board and then kept going. 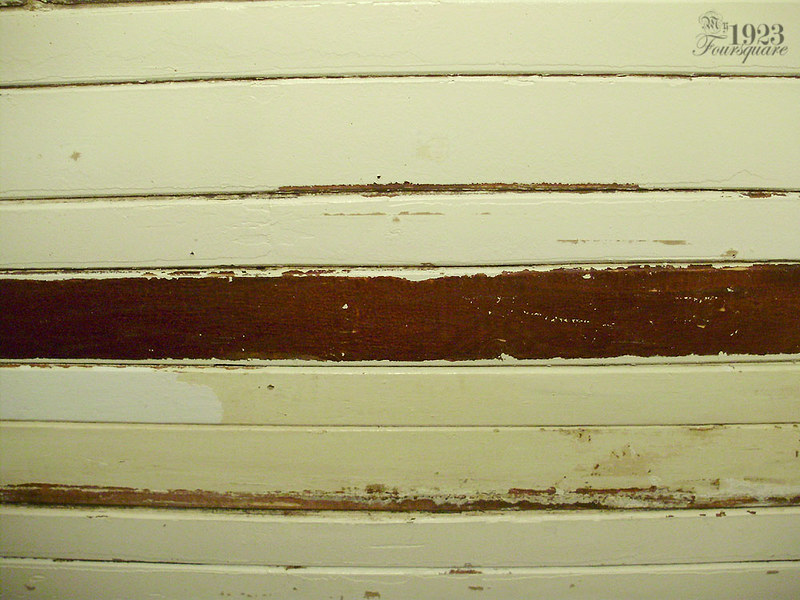 This is the result of just half a minute of work. The thick layers of paint in the centre of the boards came off quite easily. This leaves just a bit of white at the edges where the paint had previously chipped and they had painted over it. The paint film separated right at the layer of shellac over the wood. As it turns out, the entire ceiling is actually stained and shellacked solid birch. In today's world (and today's prices) this would be about a 1000$ ceiling to put in. There's at least 500-600$ in wood, plus the added labour to have it stained and varnished. Back in the 1920s, however, it was probably just a bit more expensive than drywall, or possibly close to the same price, since drywall was still a very new product. 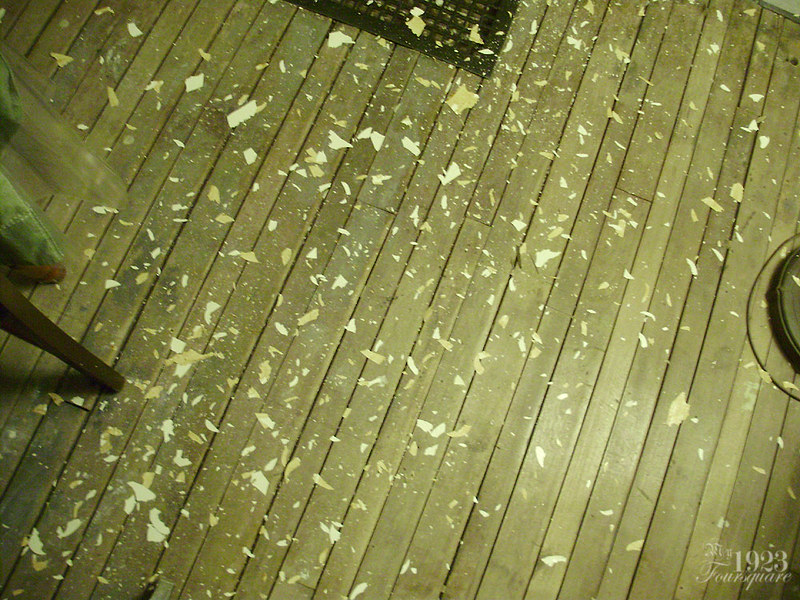 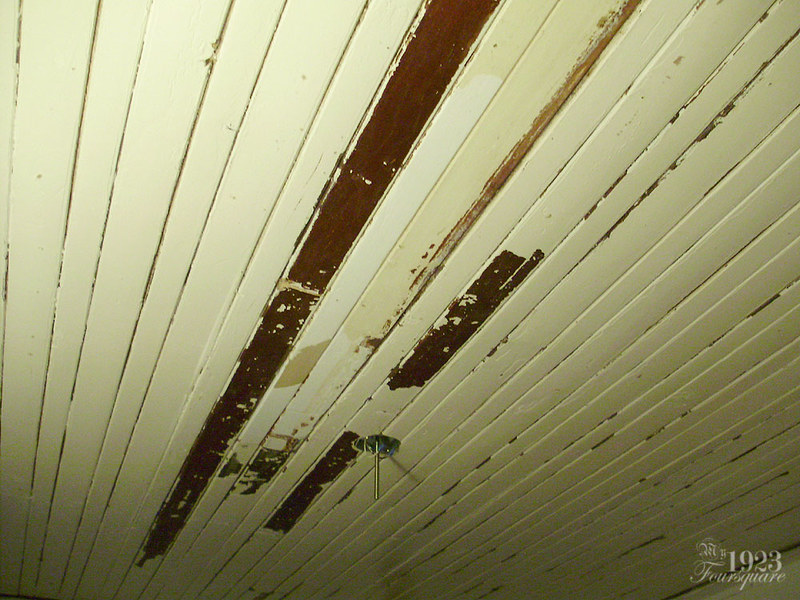 Here you can see a bit of an action shot (which was hard to photograph with my left hand) showing how the paint was coming off the boards. 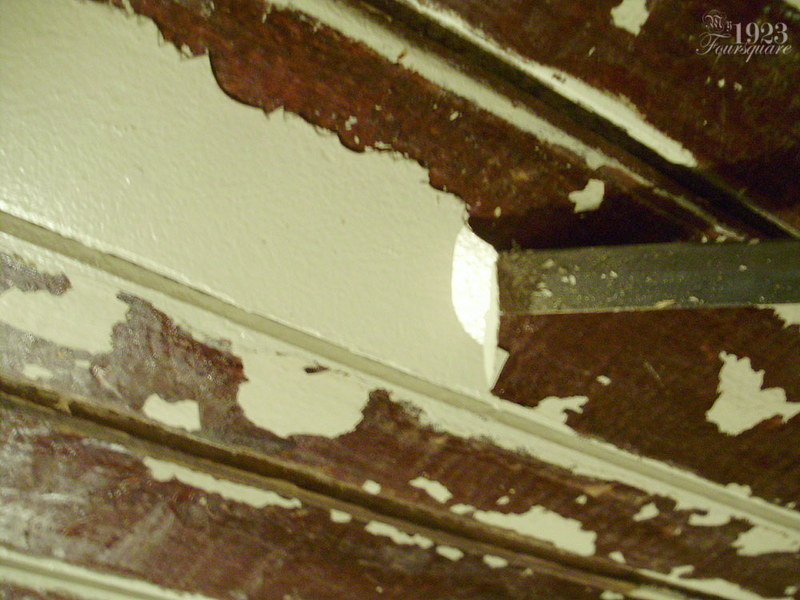 Some of the first layer of oil paint was not coming off as easily, but at least the first 10 coats was chipping off pretty effortlessly. 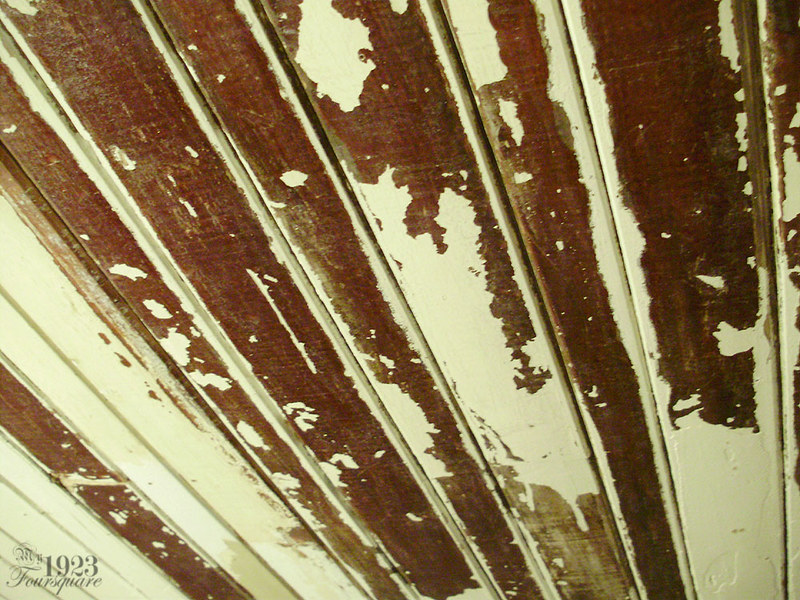 This is probably and hour's worth of work. This was not fun, since you're working on a ladder with your neck bent. 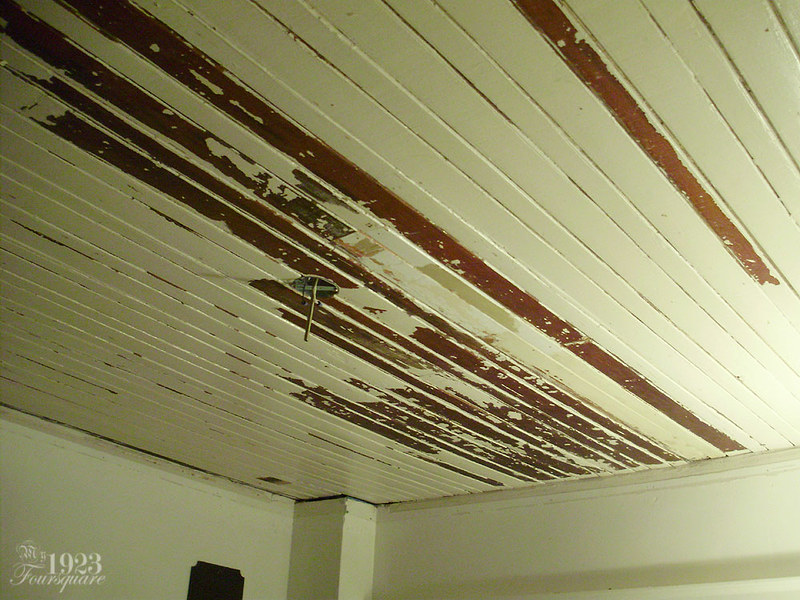 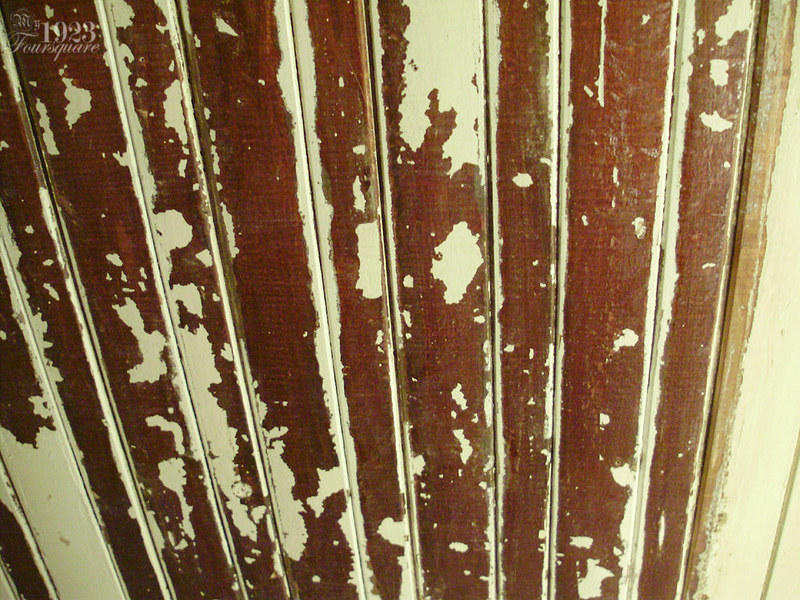 The original shellac under the paint seems to have had some kind of reaction over the years and it now has sort of a swirly frosted look to it. Reminds me of frost on a window. 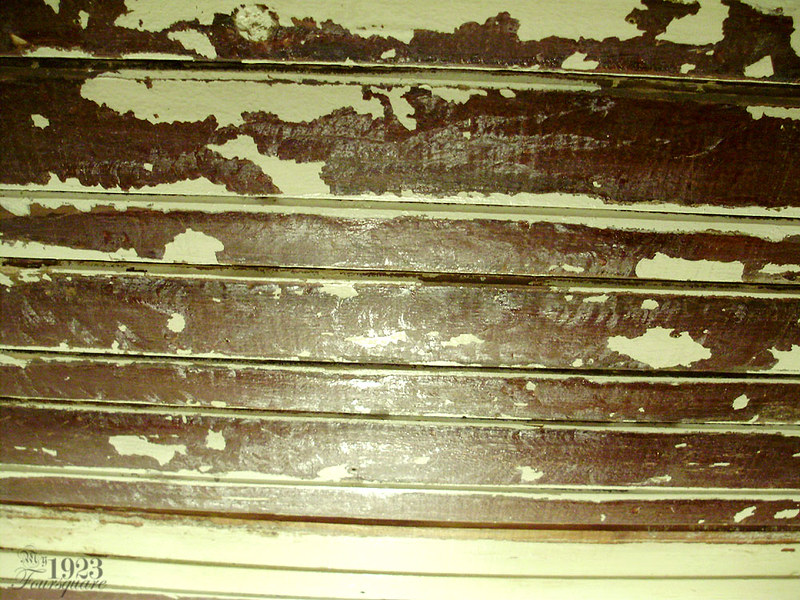 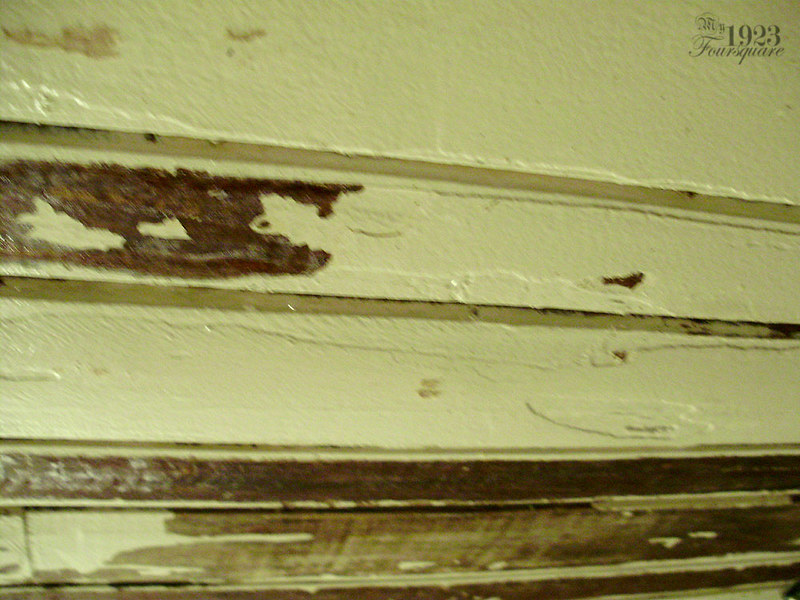 By far the worst part of this whole job is just the paint chip management. I vacuumed the room about 3 or 4 times but it's basically an unending mess. 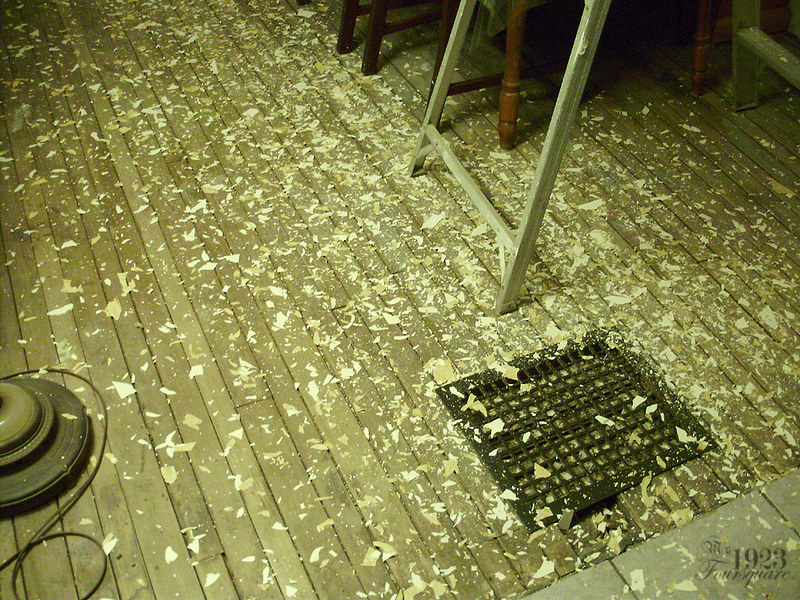 I think this is what I managed to scrape in one or two sessions (a few hours). 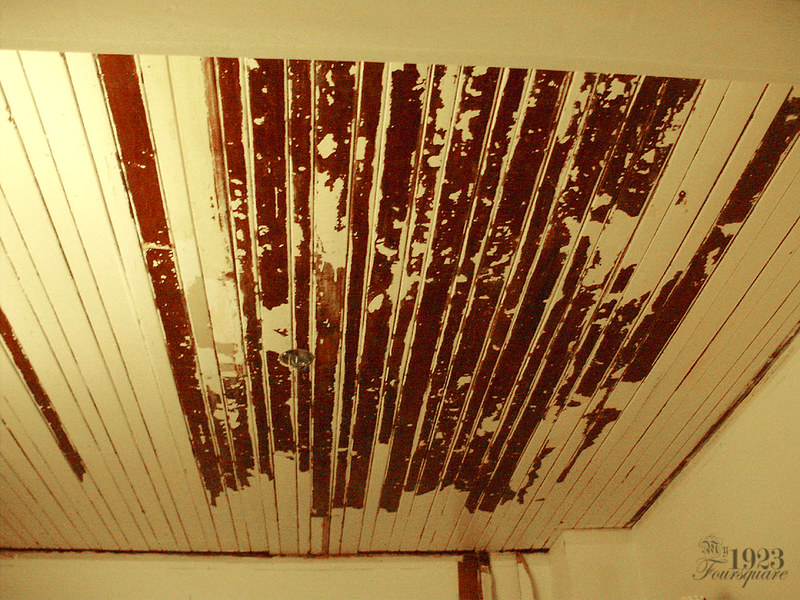 Yeah, I think that's what I did on the first night, and this was the next day (the bulk of the ceiling scraping was done between about Jan 2 to 6). 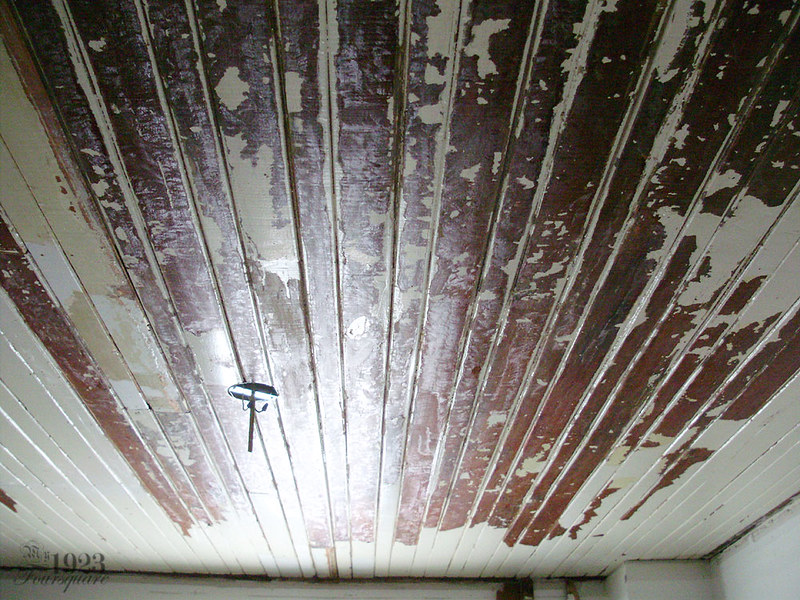 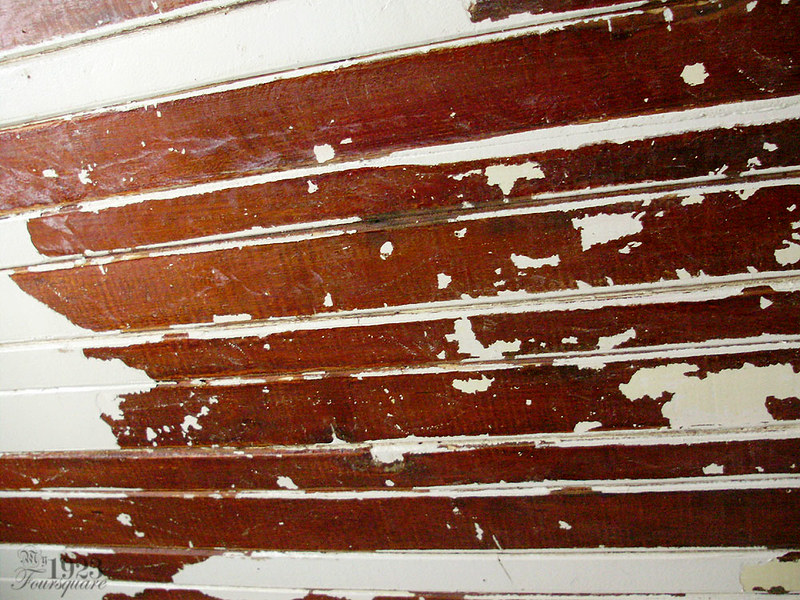 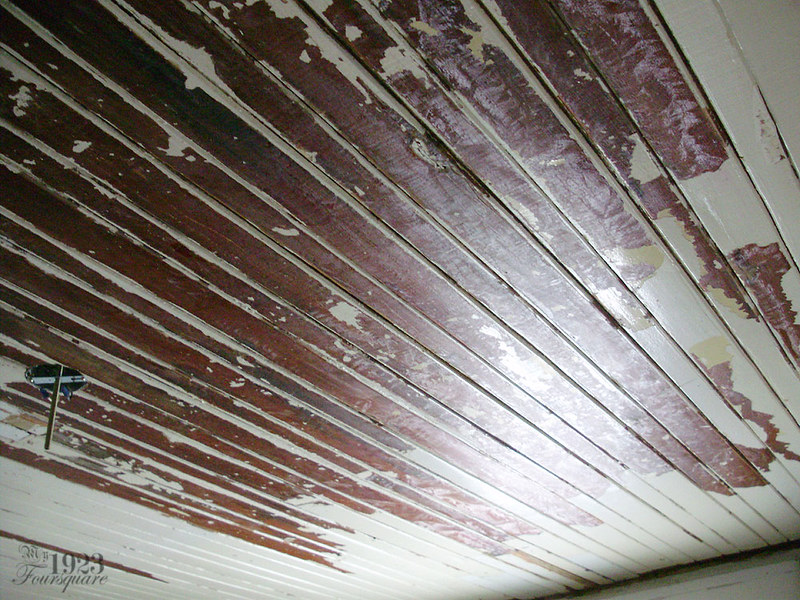 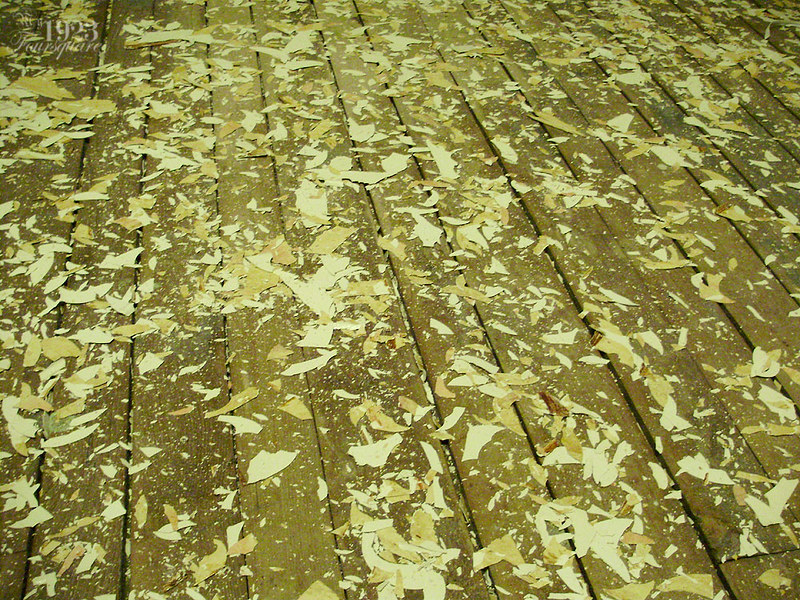 I also shot this terrible video for you guys. You might want to turn down your volume, as I had loud trance music on in the background as I was working.

As of today, 95% of the ceiling is paint free. I have a few edges left to do, then I can patch and putty the damaged bits. There's one big saw cut to putty, and several nail holes.

Yesterday I went to buy BIN (shellac based) primer and some white paint.

And yes I did briefly consider trying to save and refinish the original wood ceiling, but it would be an insane amount of work. All the cracks are still full of paint, the new patched-in boards don't quite match the original colour, and to actually get everything nice I'd have to chemical-strip, sand, and re-stain the entire ceiling. That's just NOT going to happen. It's too much work, and in the end, it wouldn't match anything else in the house. All the other ceilings and trim have already been painted-over decades ago. I'm just aiming to have a nice white tongue-and-groove ceiling instead of the drywall. I will also fix the ceiling in the kitchen, but not yet. There's no sense in trying to do it now because I need to remove the chimney in order to patch that corner hole. I will also need the cabinets to be out of there because they do sit right against the t-g ceiling and there's probably many extra coats of paint on the inside of the cabinets.

Speaking of the cabinets, I've actually determined that they must be original to the house. They kind of look more like 1940s or 50s cabinets, but the way they are built and how they were installed seems to prove that they were put in at the same time the house was built. They but-up against the ceiling, and they finish on the original tongue-and-groove paneling that went around the kitchen originally (more of the same wood). Additionally, when I removed the plumbing stack, the exposed cabinet side was unfinished white wash, which is the same wood that was used for the casings. Anyhow, more on that later.

Lastly, I'm including this photo to give you an idea of what a dark wood ceiling would look like. Many houses still have them, but a lot of people don't like the dark wood, so the survival rate for these is getting lower every year. The craze for DIY renos and constantly wanting to stay "on trend" with interior design is also not helping. 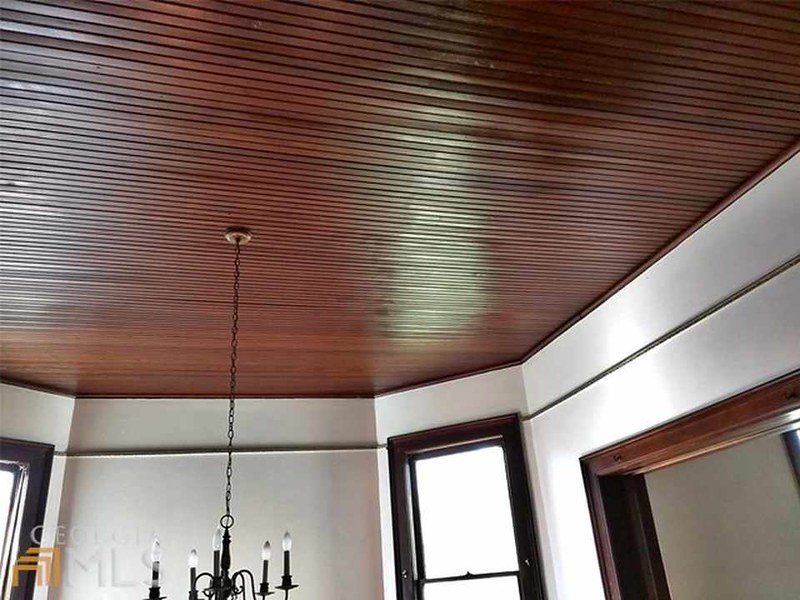