Over the past week, I've completed the crown moulding/casings "project", and I haven't really decided what to tackle next. There are a lot of things on my "to do" list, but I don't feel like working on many of them.

Recently, I bought a bit of fabric and supplies to do a window treatment for the office. It will be very simple, and I'm not sure if it will be permanent, but I'm sick and tired of the ghetto-looking curtain that I've been using for the past 2 years (hung on 2 nails). So that will be a project I'll do soon.

The other thing I started doing was restoring/rehabbing old lock sets. I recently bought a whole lot of them for 9.99$ (plus 30$ shipping), but there were about a dozen locks and several mismatched handles in the bunch (well worth the price if you consider that I can resell any lock for at least 15$):

Here's one of my "before" shots (some of the ones I haven't cleaned up yet): 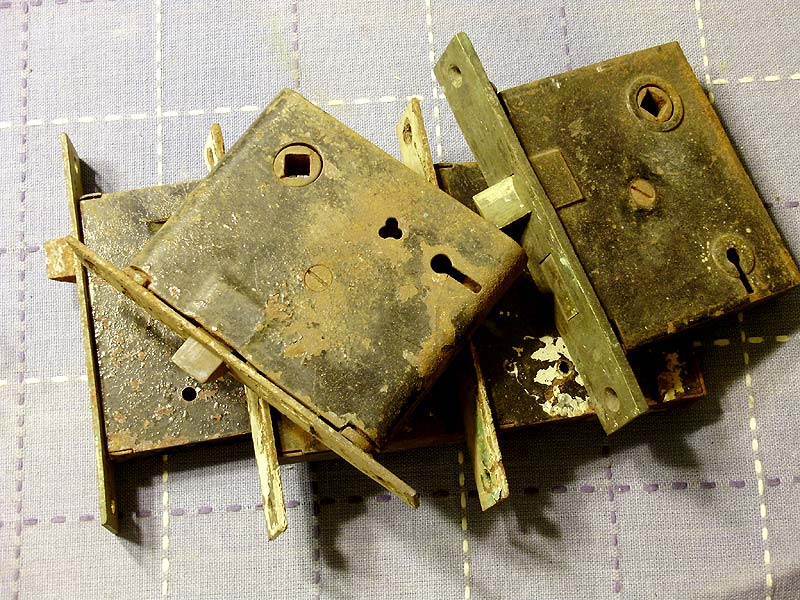 A typical "before and after" from this particular bunch of locks: 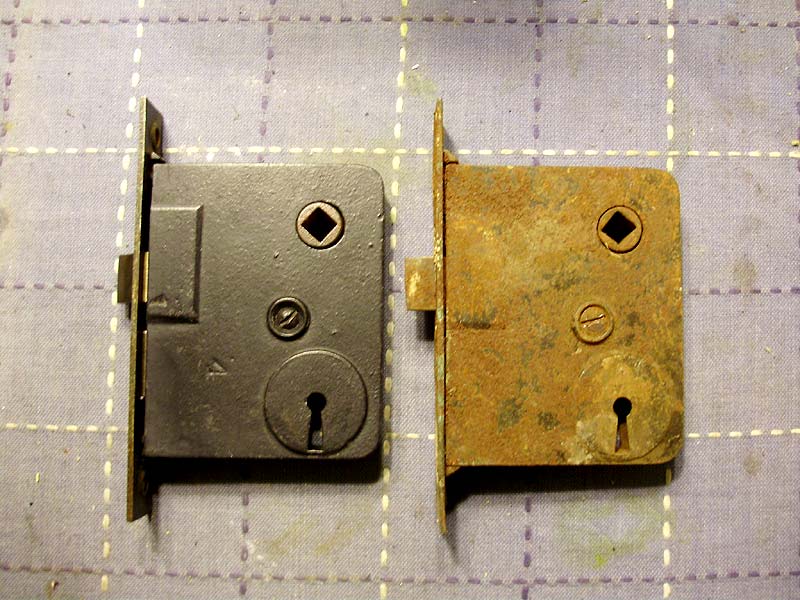 It's surprising what a good scrubbing with steel wool, and a Dremel wire wheel (brush) plus a quick coat of paint will do.

I discovered a wonderful (and very quick/easy) way to restore the nice soft black finish on most of these for under 5$. I bought some cheap Wal-Mart flat-black spray paint. The "Color Place" brand that is around 3$/can. One light coat on all the parts (marking off the brass front plate) gives a nice flat finish.

However, I noticed that after the paint dried, simple handling caused the paint to buff (note finger prints on the left piece). So I gave the painted parts a buffing with a soft cotton rag (ie: an old sock) and I got a wonderful soft shine. 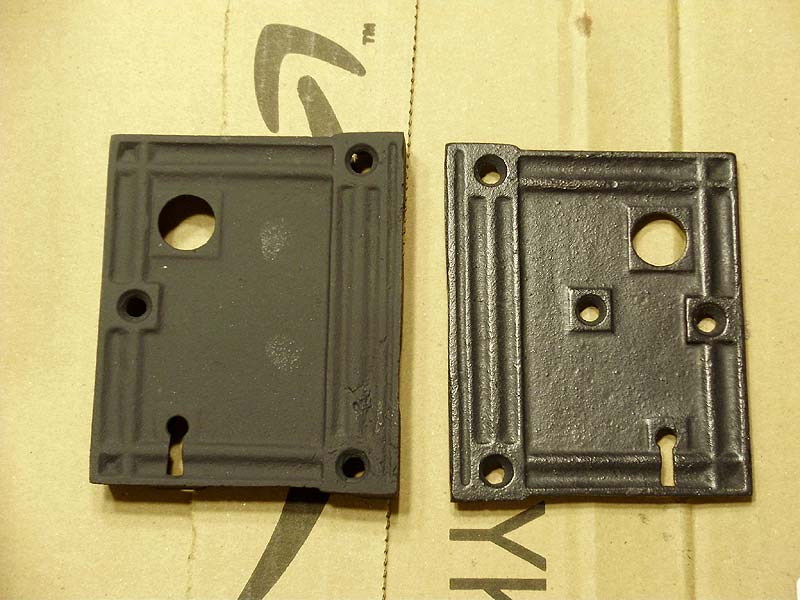 For the lock above, I actually got REALLY LUCKY, and one of the spare parts from the junky lot above was a "near perfect match" for my missing piece. It was so rusty (before I cleaned it and repainted it) that it was orange. Check it out! 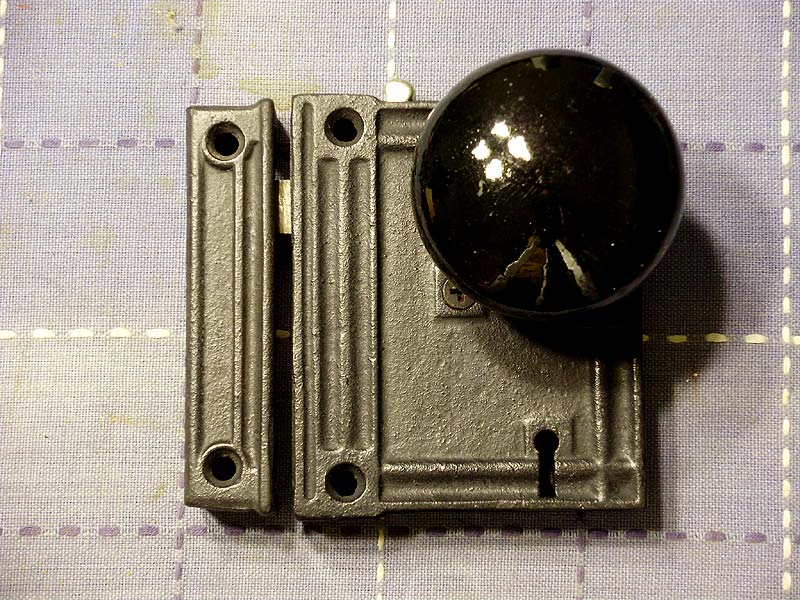 These old locks are incredibly well made. All the parts in this one are solid cast iron. 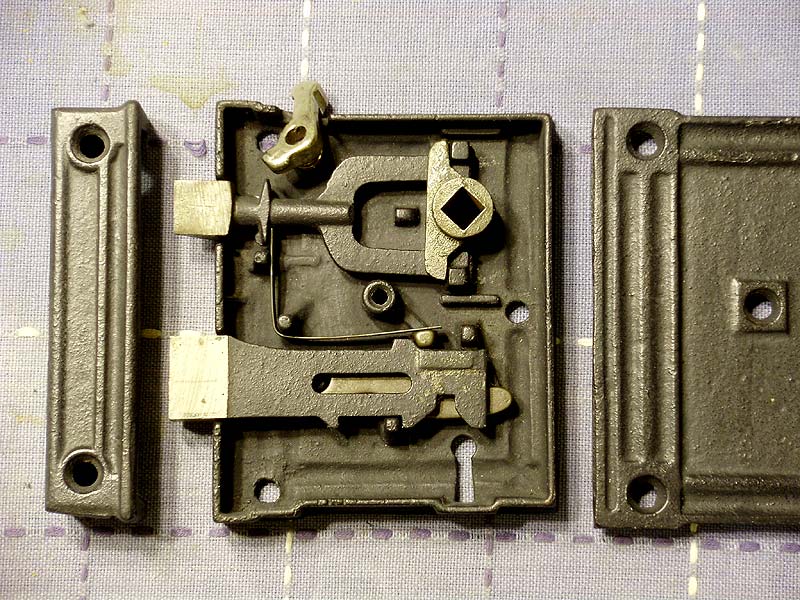 Likewise, several of the other locks in the bunch were quite sturdily made, boasting cast pieces. This one (below) is my favourite of the bunch. It has a flashed copper face plate in very good shape, and the internal parts still retain their original plating (not so much for the other locks). Unfortunately, I probably won't be using this one, since it has a very odd spacing/arrangement for the location of the latch/bolt. I'm not sure who the manufacturer is, but there is a club shaped leaf logo with the letters Y&T. The key is a spare from my collection that fits/works perfectly. 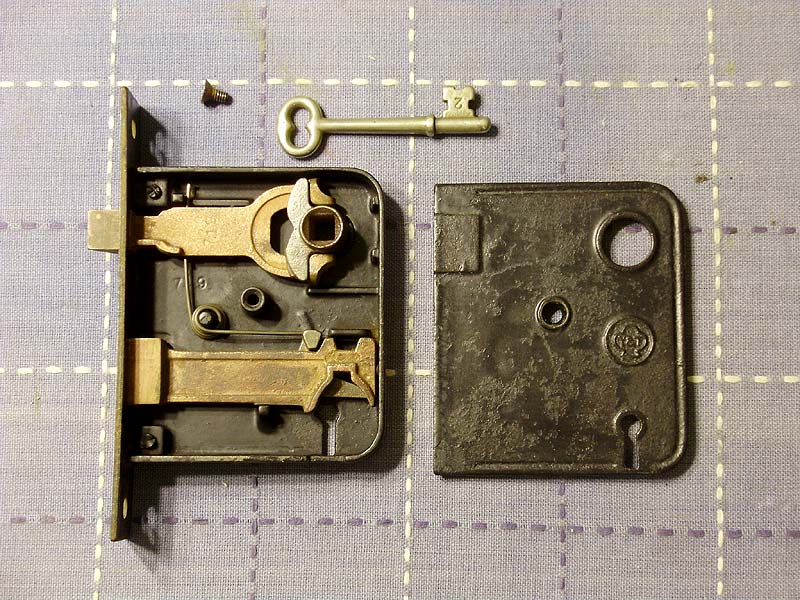 Here's another "before and after". This lock is HUGE, and it has a very odd setup. The latch is operated by a rectangular button on the bottom of the lock. I assume that it worked with some kind of handle that had a thumb latch that would have pushed upwards on the "button", but I'm really not sure. Additionally, the lock arrangement is very weird. I'm not sure what kind of key this lock would have used (shape-wise) but it would have had a large flat end with notches for the three "tumblers".

This lock was absolutely FILTHY. It was also badly chipped and rusted. You can see the paint chips through the new paint in the after shots. I scraped off anything that was loose and flaky. 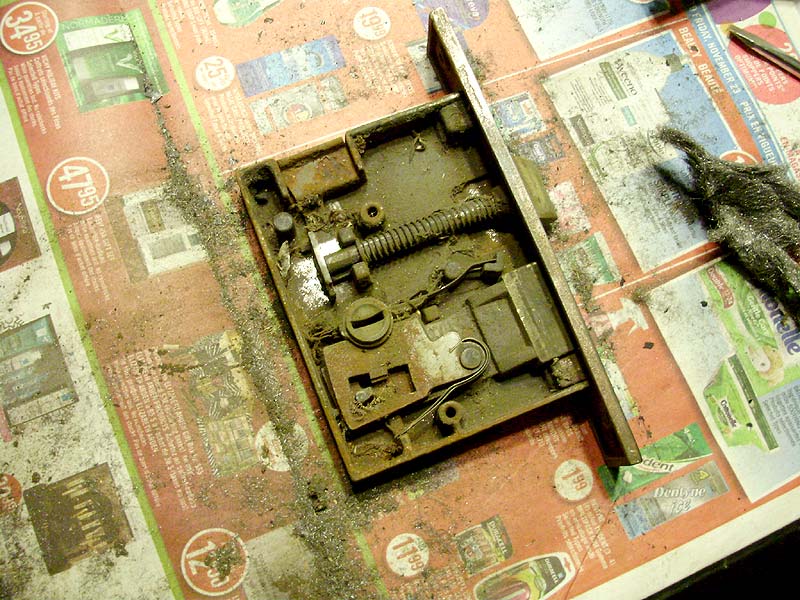 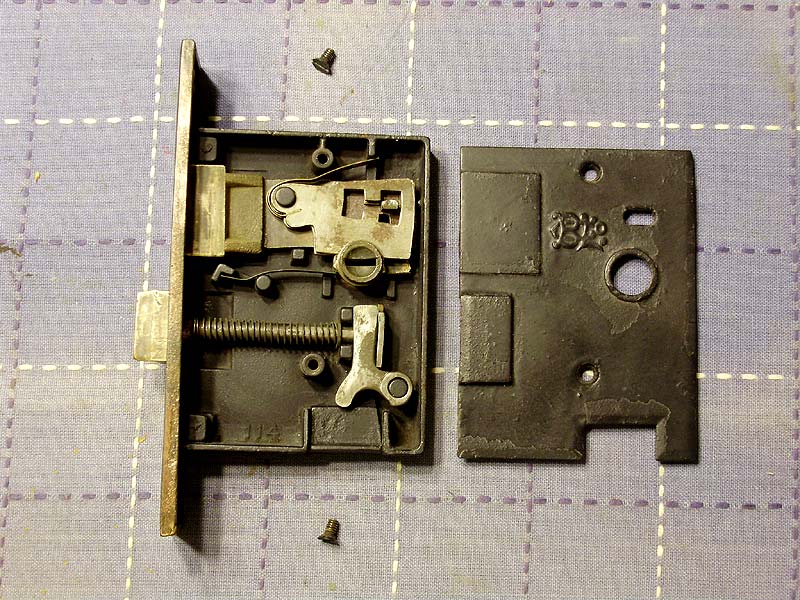 These are all the ones I've cleaned so far. 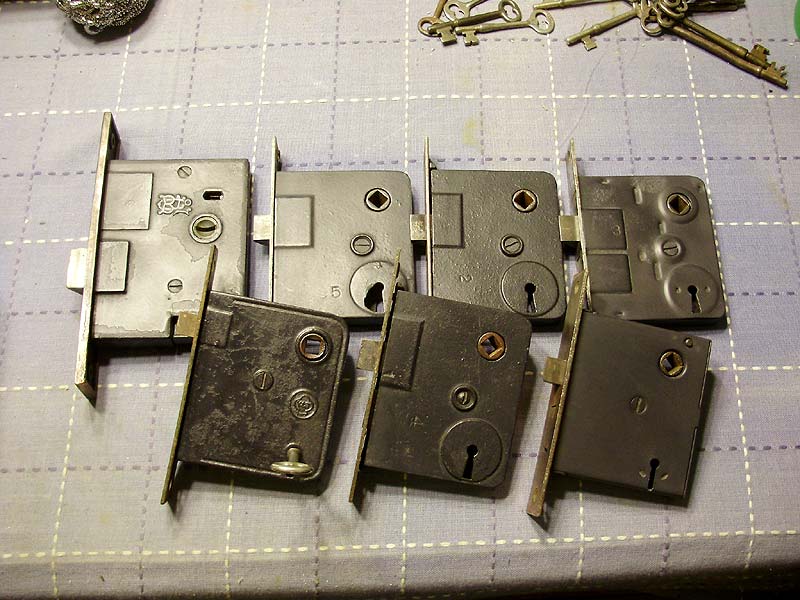 Note the "really nice one" with the key, flashed copper face, and odd spacing on the extreme right. The second from the right is chrome plated on the face (so I can't use that one either). All of these are copper or flashed copper, except for ONE brass one. I might still use the copper ones (mixed-in with brass ones) since I don't see much point in buying more locks when I already have so many). 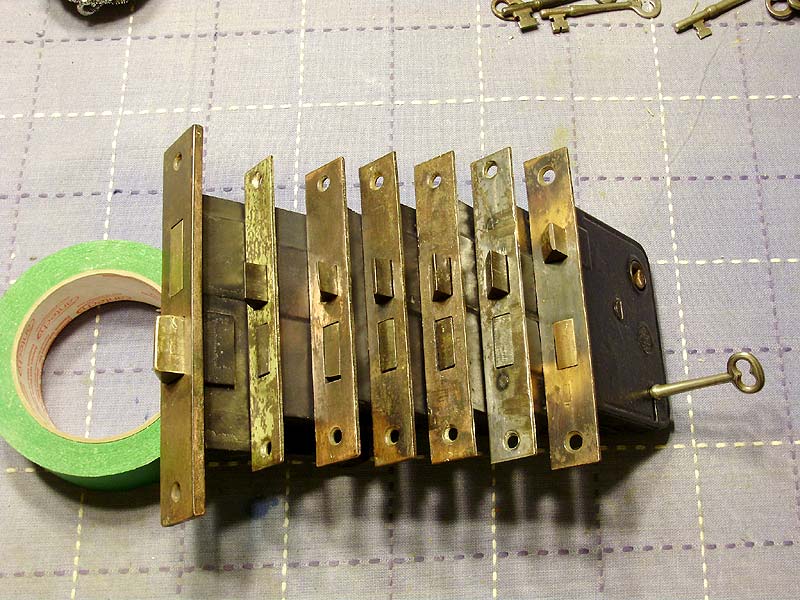 And if you're wondering, yes this was a lot of very messy work. Each lock took at least a half hour, and I've done one to three per day for the past little while. I'm out of steel wool, actually. I have at LEAST another 10 locks to do, since my other "good" locks that I set aside for my doors also need rust removal (even though the outsides look nice and clean, they look awful on the inside). I have another dozen or so that will stay filthy until I decide what to do with those. These are ones removed from salvaged doors over the past year. I may reuse them on their original doors, or I may not. Depends what I do with the doors.

Speaking of hardware, I'm still in need of some plates. The ones I need are shown below. They can be covered in 20 coats of paint, and lightly rusty (I don't care sicne some won't be visible), but I don't want to pay much more than 10$ per plate. I've been trolling around on eBay and Etsy without much luck for the past few months. These are fairly common plates. 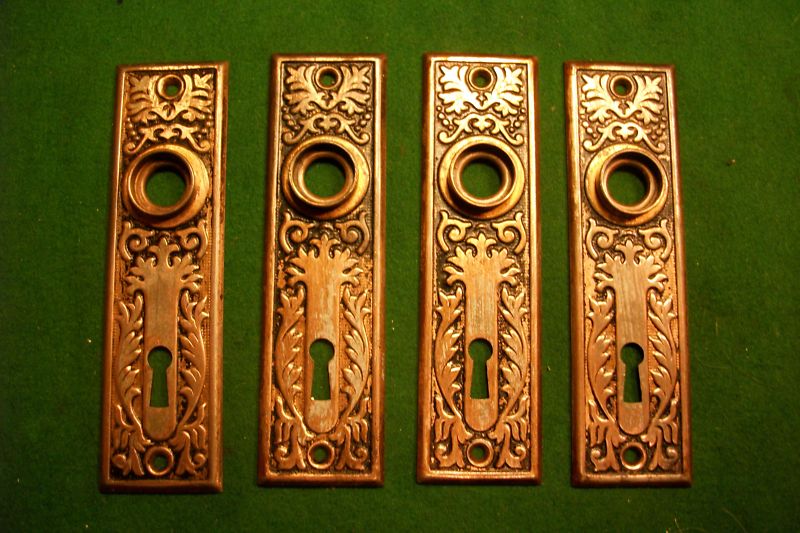 Lastly, and possibly even more fun and exciting, is the latest project that I started just a few hours ago. This has been "ready to do and waiting" for probably over a month, and I just haven't felt like doing them. I still don't. Painting items like these, with multiple sides that need to be flipped, and that need edges done (without drips and runs) are a huge pain in the ass. But at the same time, I'm really looking forward to installing them, and putting the beautiful old fashioned brass hardware on them.

For these, I'm going to try 2 coats of primer + 2 top coats of white. I want to see if it will turn out a bit nicer (since my "good" white trim paint really isn't that great). 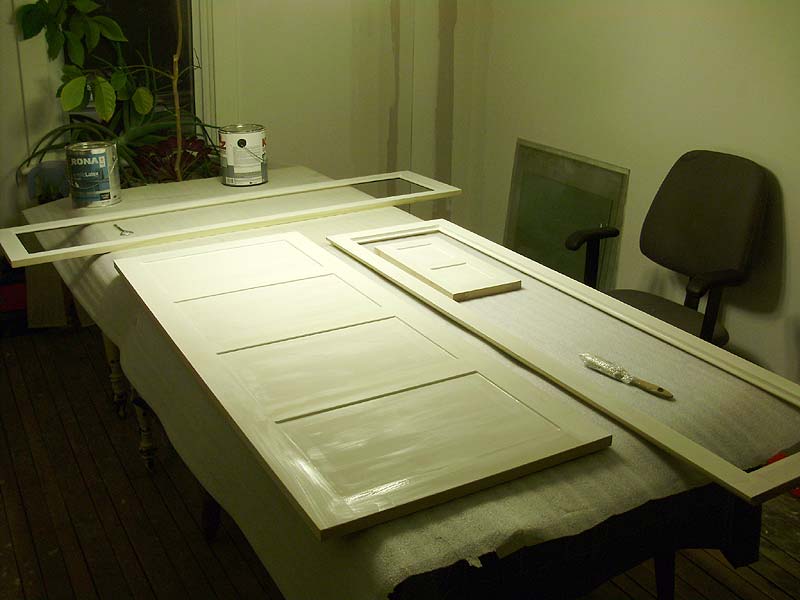