The porch is actually quite nicely put together, but it has been neglected for decades. The old t-g was patched over with siding (which I didn't like), and it seemed rather odd to have ONLY one section on it that was metal, and everything else was wood and would need painting.

I decided to take down the siding and have a look underneath. I knew it was t-g because of a missing section next to the stairs, but I didn't know what shape it would be in. As it turned out, it was pretty bad.

All the boards were slightly shrunken, cupped, rotted, and caked in thick failing oil paint (probably lead based). I knew it was not worth the trouble to scrape and repaint them.

As I was tearing them off to replace them (with nearly identical stock from Home Depot!) I was actually surprised to see that the boards were in relatively good shape. The ones that were rotted were only rotted on the bottom 2 inches, and along the seams. 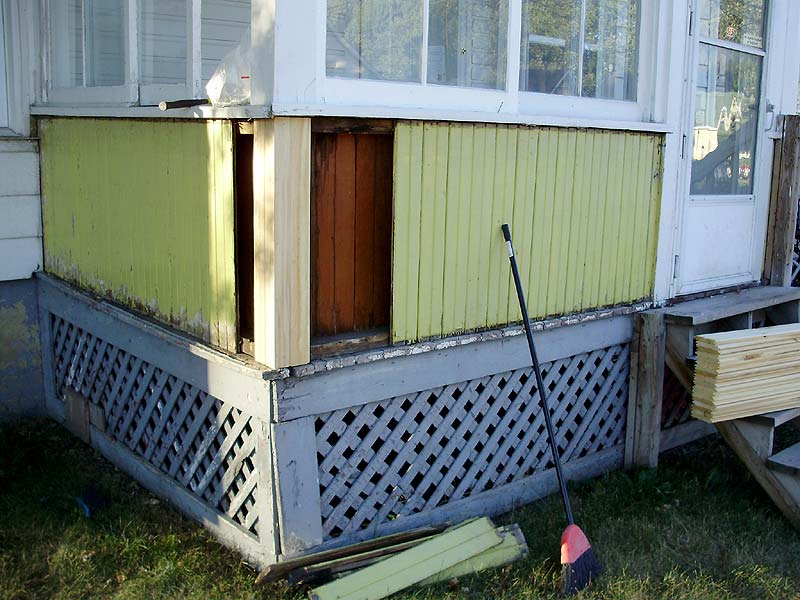 I started with the front, since it would be quick and easy to do. I had pre-assembled and glued together two "corner blocks". These are just 2 boards cut at a 45 degree and glued together on the seam with waterproof exterior glue (and a few small nails). 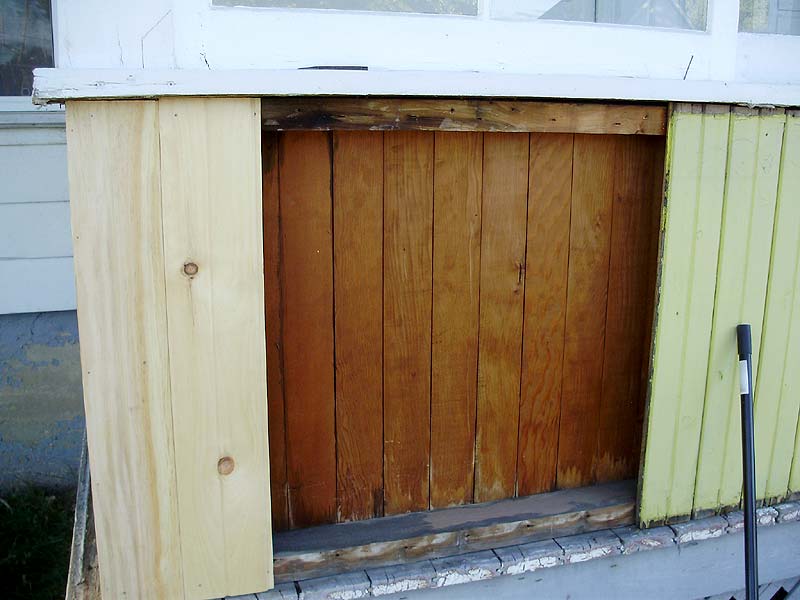 As you can see, above, the interior t-g boards are thinner plain boards around 3", and the exterior ones are 3/4" thick V groove double boards at around 4 1/2"

Front done, siliconed in the joints and nail holes, and nearly ready for sealer/primer. 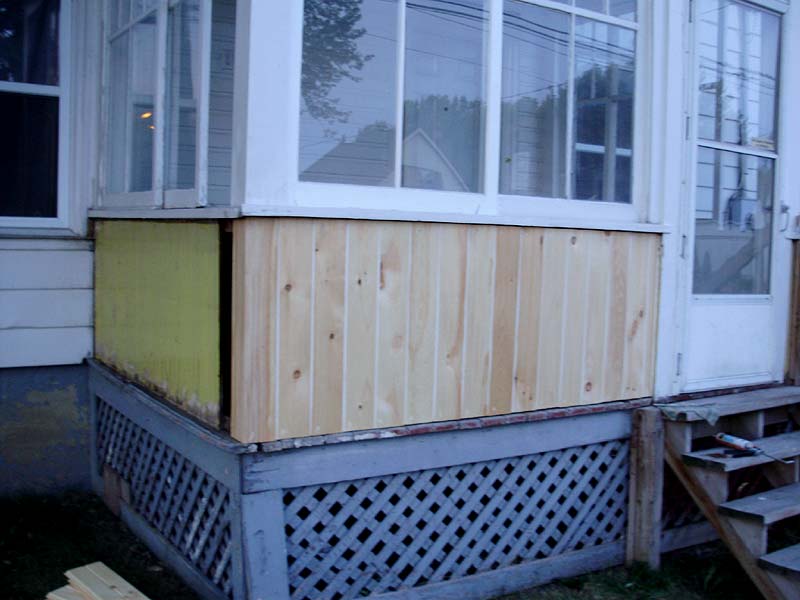 The other issue I had to fix were the two end boards.

When they built this porch, they made it quite easy/simple rather than practical for water shedding/future repairs. The base is pretty much built like a deck, with the floor boards exposed on 3 sides. Over this, they added main support beams in the corners, and then very simple 2x4 "boxes" with t-g nailed on each side. These are then capped with a sill and the windows sit on that.

Because of the way the floor was laid, it's hard to make repairs. The end boards were thankfully SO ROTTEN that I was able to just pull them out.

I don't have any in-between shots, since I was running out of daylight, but I had to rip off all the boards from this side, then remove the floor edge board, measure, cut, and fit the new one, and screw it down carefully. I used some 1" cedar deck board for this since it will be a bit more rot-resistant than the original pine.

Also not shown was my crafty cabinetmaker magic where I had to carefully cut an oddly notched custom piece* to fit around the window sill and house edge, AND get the piece in there with the t-g joints still working and tight the whole length. There's a bit of cheating involved, but if you want to know how I did it in detail, just ask. 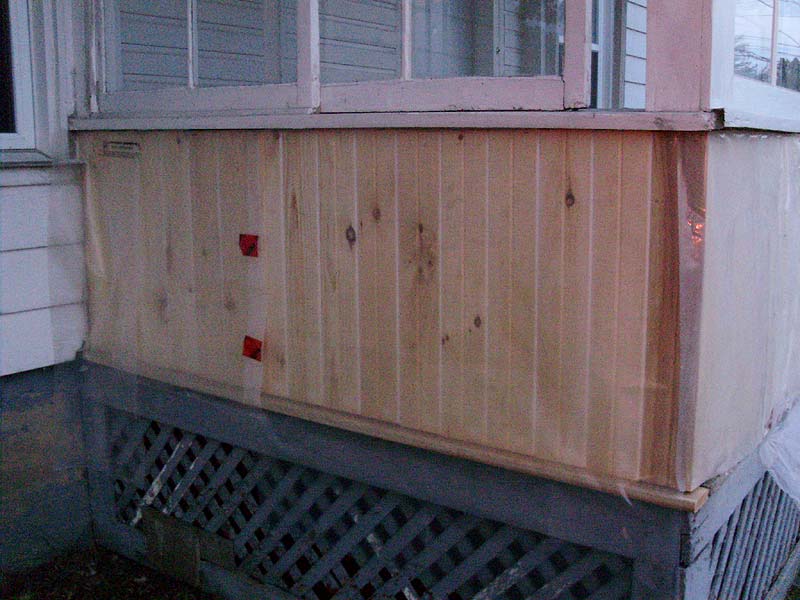 The clear tarps are because we're expecting a lot of rain over the next few days. We just had a HUUUUGE downpour about an hour ago and the entire garage is flooded (which hasn't happened in almost a year).

I can't accurately describe how anxious I am to replace that door and those awful stairs. 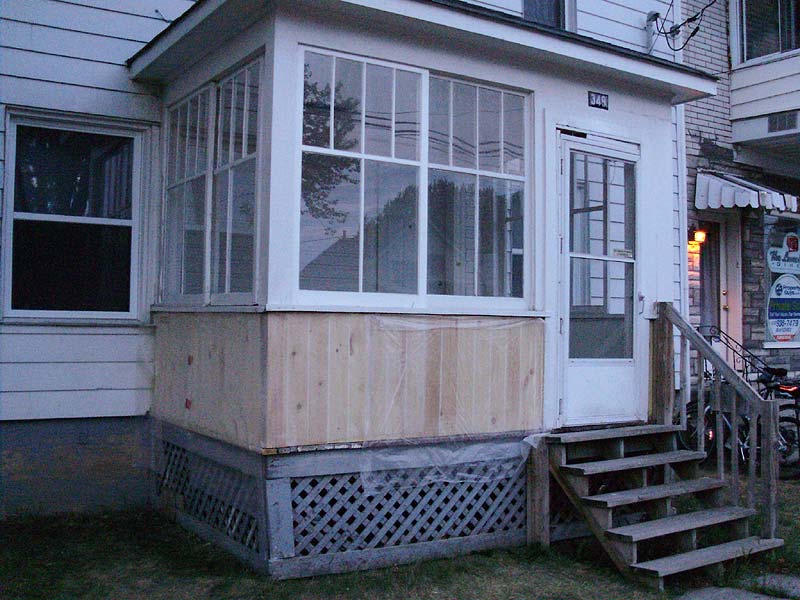 These are from this morning. The bottom 2x4 and a small bit of the corner post are rotten. I couldn't really do much about the bottom board (since all the interior t-g boards are nailed to it and I DO NOT want to match and replace those), so I added a new 2x4 to hold the new t-g "siding" boards firmly.

I also replaced the extremely rotted floor board, which crumbled to pieces (literally). 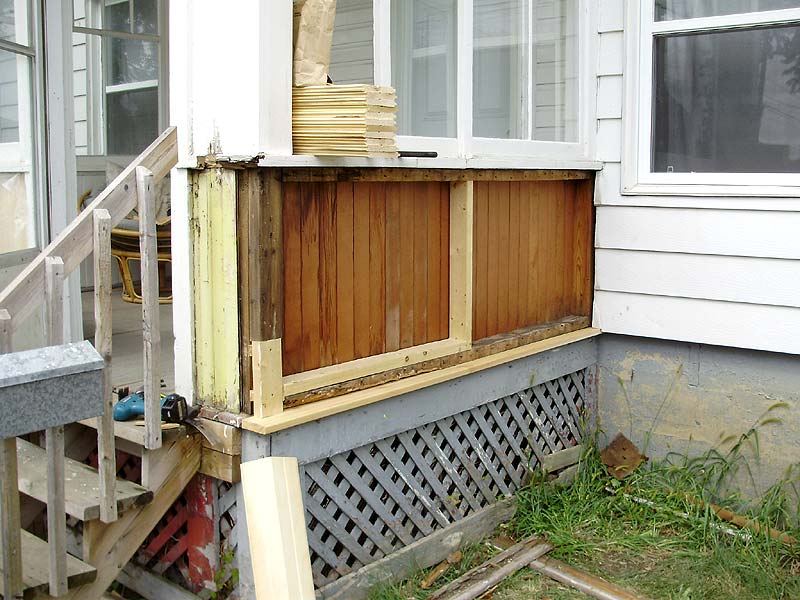 This corner sill piece was also badly rotted and partially missing, so I tore it out. I'm actually thinking of replacing all of these, but I'm not sure exactly how involved of a repair that would be, since a lot of pieces are sitting on or around them (like the capping boards on the corner columns, the windows, door jambs, etc). 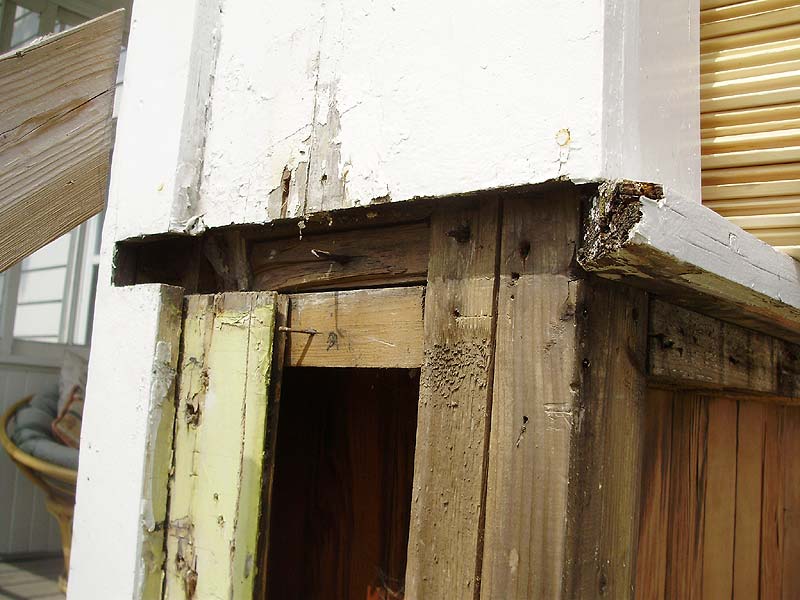 Not shown, since it was starting to rain, are 90% of the boards for this side. I ran out of wood t-g (since the remaining pieces have too many flaws to use), so I'll need to grab 2 more lengths. I didn't have time to do the caulking or anything else, since I wanted to just tarp it.
Posted by JC at 5:08 pm