Alright, I've been promising update photos for a while, so here's about 20, as current as yesterday.

As I showed in a previous post about the porch, I started replacing all the old tongue and groove boards around the porch's lower wall. Most of it was rotted on the bottom, and it was practically falling off since the nails holding it in place were nearly rusted through. Add to that the several layers of failing paint, and then it's just not worth stripping and saving it.

I had half of it done earlier, and the second half, I think last weekend... 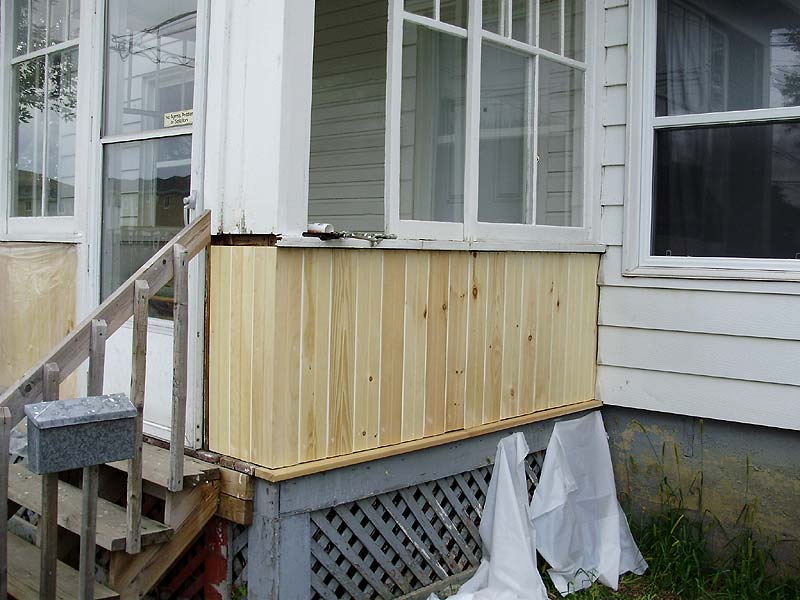 In the process, I had to remove part of the railing, which was very poorly attached, and I also removed part of the door casing.

I also started working a little bit on the inside of the porch. I probably won't do much work on the interior this year, but I might get some of the trim and woodwork done.

I started by removing the old 1/4 round along the floor, since it was in bad shape. I also want to replace the cove along the top of the "base wall" since some of the corners are screwed up, and it's also not in very good shape. Other than this, I have one length to replace at the ceiling, and one or two boards in the ceiling to redo (from rot caused by a roof leak).

While working on the door frame, I'm going to replace and possibly improve/dress-up the door casings, so I removed those as well. 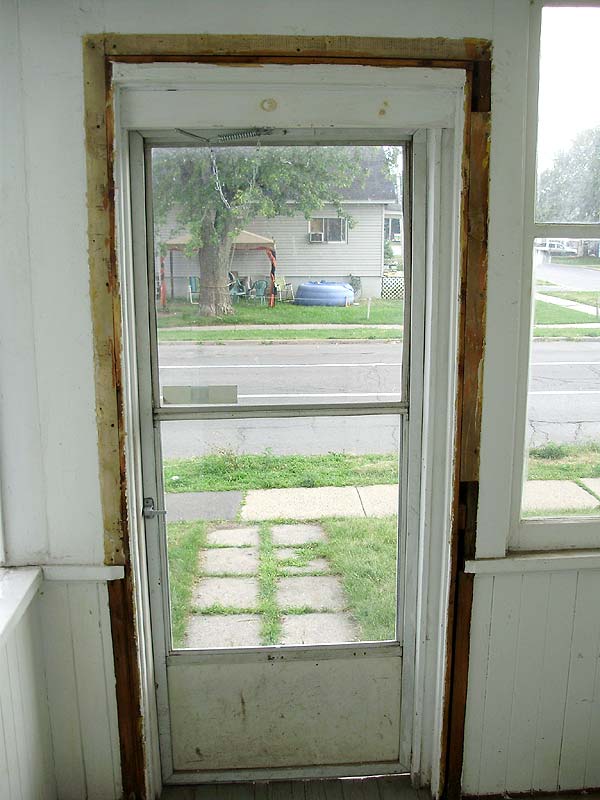 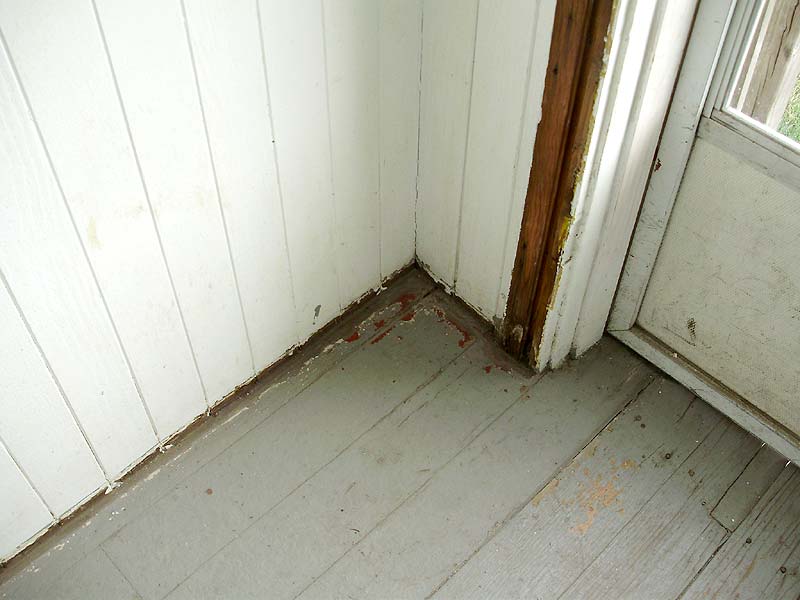 Another thing I want to change is this: 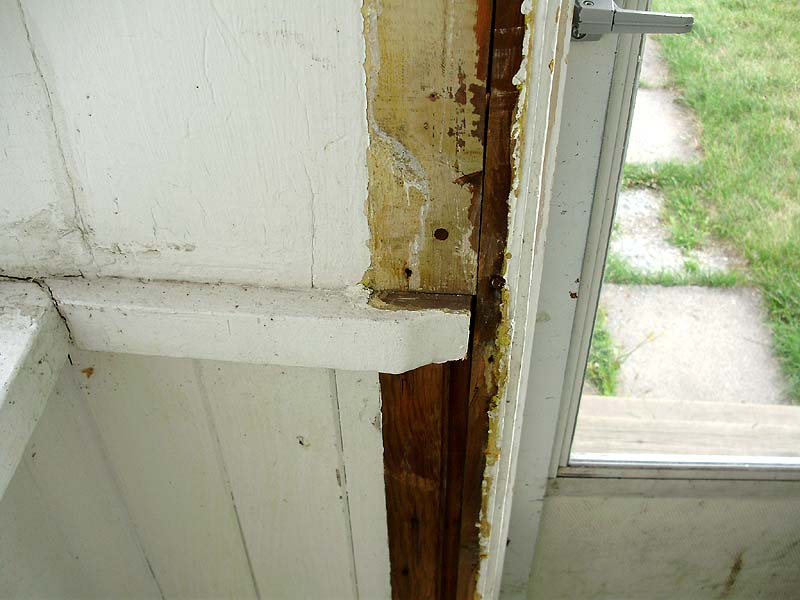 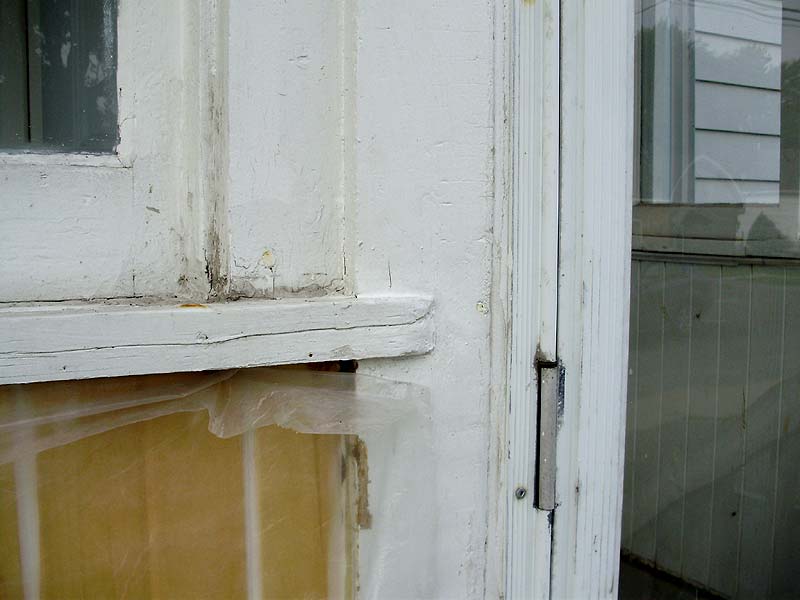 On the inside and outside of the porch, the sill goes into the door casing, and the casing is cut to notch around it. I've always thought this looked bad (since day 1), and I will modify it.

Here are a few details of the botched screen door install/patch job around the door. You can barely see the original door jamb under the various bits of added wood, and depending on the condition, I might have to remake it entirely. 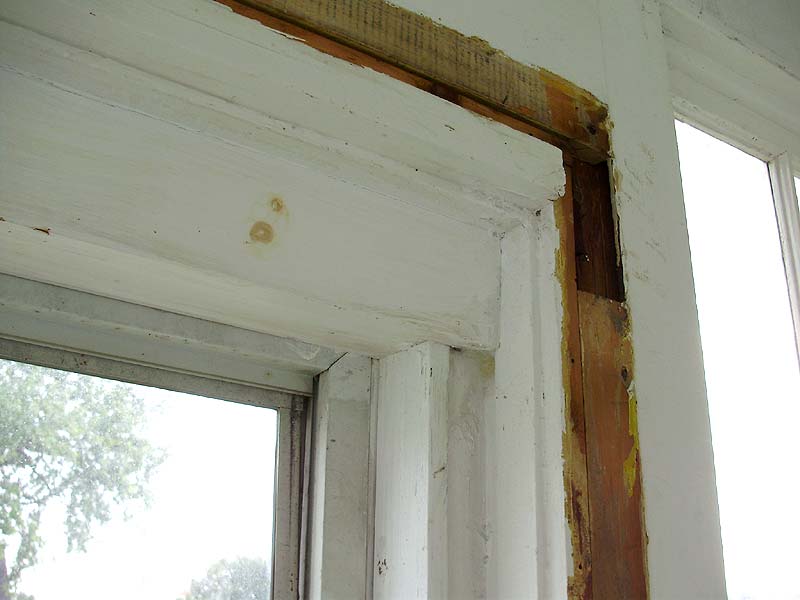 The door is so badly installed and crooked that the house numbers look lopsided. 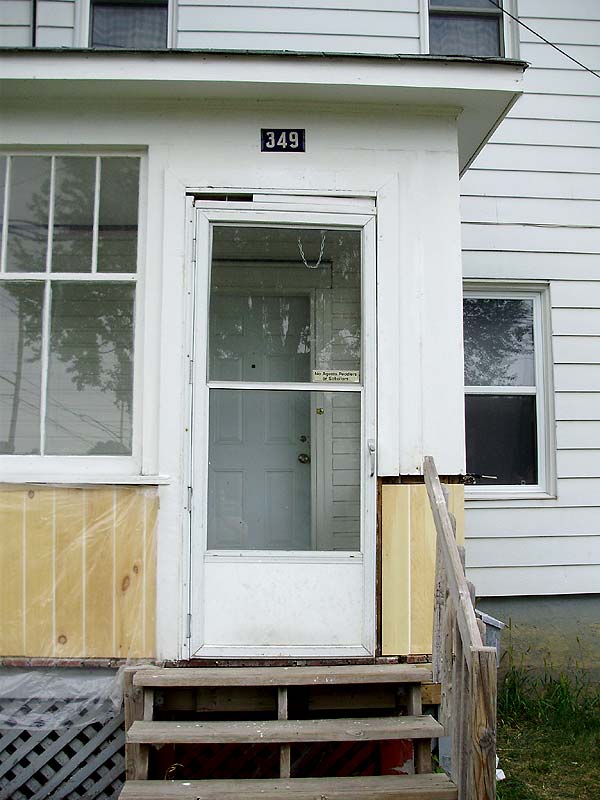 Alright, the following set of photos are the work that I did on the old cedar door so far. This is a rather extensive/involved repair, but it's a repair that I did with very limited tools. All I used for this was a router with a 5/8 square rabbet cutting bit (one with blades on the bottom edges as well as the sides), a table saw, clamps, and a chisel. I also used a speed square as a fence to route a nice straight cut on the ends). A planer is also nice to have for your patches, but you can work around this by using stock (thinner) material, or ripping-down your wood to fit.

NOTE: Some of the photos *suck*. The garage has really crappy lighting, and I was not going to get my tripod just for this.

I started by deciding how deep I should route-out my patches, so that I didn't remove too much material, but deep enough to add a lot of strength in the final product. I opted for 3/8" depth on each side. 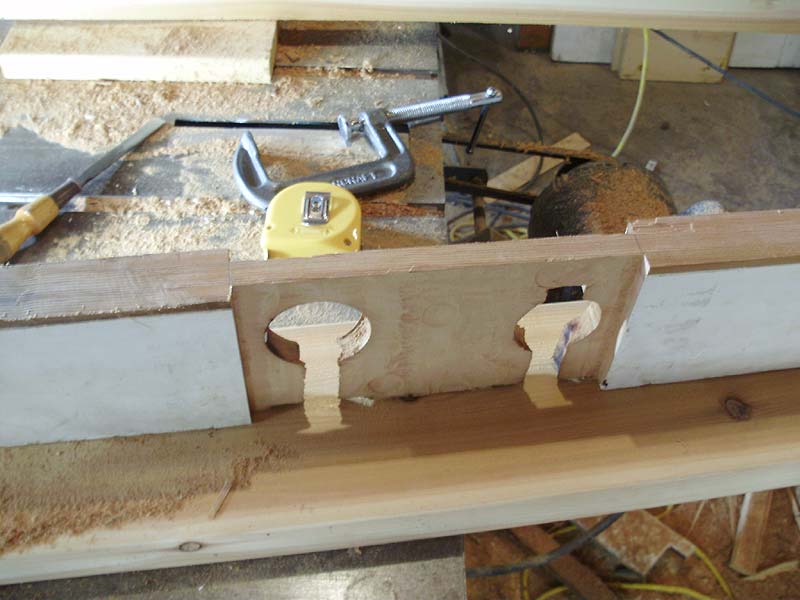 I then cut a piece of cedar to rough size, and sawed though it on both sides. My saw has a small blade, so I had to finish the cut with a hand saw. 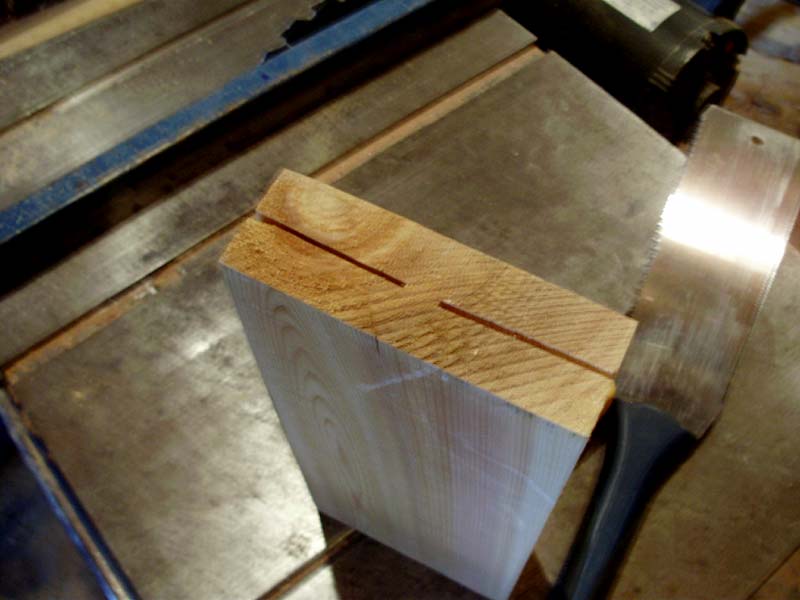 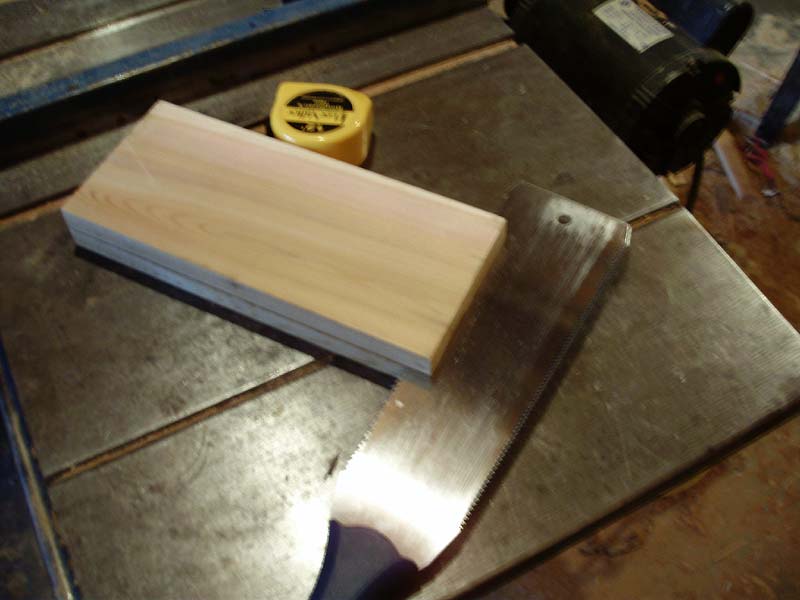 The two pieces were then run through a planer to nearly the exact depth (to minimize sanding later), and glued in place.

As I mentioned two posts ago, I used a special moisture cured, expanding urethane glue from work. This stuff is not available to the general public (it comes in huge barrels), but you can use an exterior wood glue, or alternatively, we also have a glue by Kleiberit. The one we use is hard to find, and it comes in a caulking gun tube, and it's a similar foaming/expanding moisture-cured urethane. I think it's similar to this one: http://kleiberit.com/en/products/adhesive-groups/kleiberit-pur-adhesives.html

One of the pros of this foaming urethane is that it has really good gap-filling properties (so it will actually work it's way into small cracks and crevices), and it's water proof and heat resistant. It will glue almost anything together, including metals, plastics, etc. The advantage, here, is that you don't always need to scrape-away all of the old glue if you're repairing something like an old chair.

Basically, this door will rot before it ever falls apart again.

The one big drawback is that it's very messy, you MUST use gloves, and it's almost impossible to wash off if you DO smear it somewhere. The cured foam is also hard to remove, since it's rubbery, and won't scrape off. We usually use a VERY sharp chisel, to cut away most of it, or it can be sanded down/planed.

Joints are usually misted or dampened with water prior to gluing. You don't NEED to moisten the joints, but it bonds better, and cures faster. It goes on in the consistency of honey (with a similar clear brownish orange), and it dries to look like beige expanding foam with a similar texture after it's fully cured. 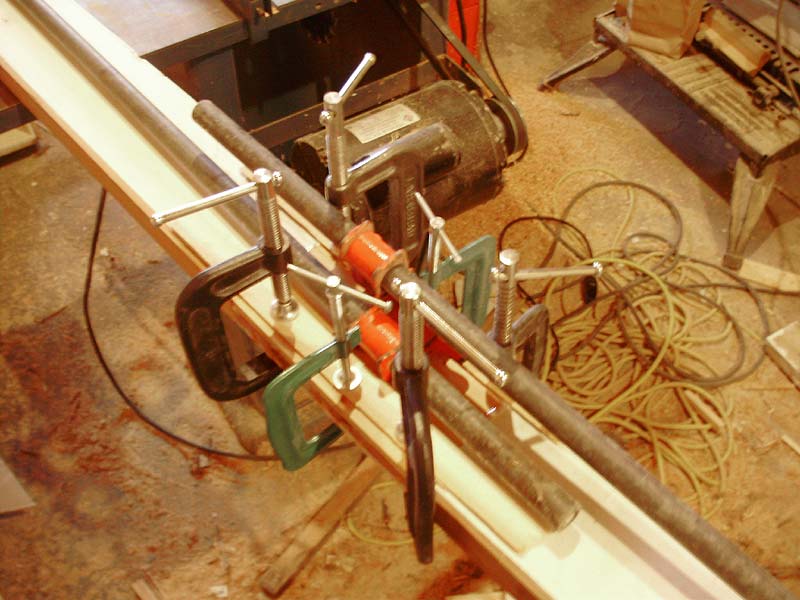 Here, I've sanded down the patch on both sides, and then ripped-down the piece to rebuild the entire outside edge of the door (partially to patch the two existing holes, but also because of damage and rot along this edge. 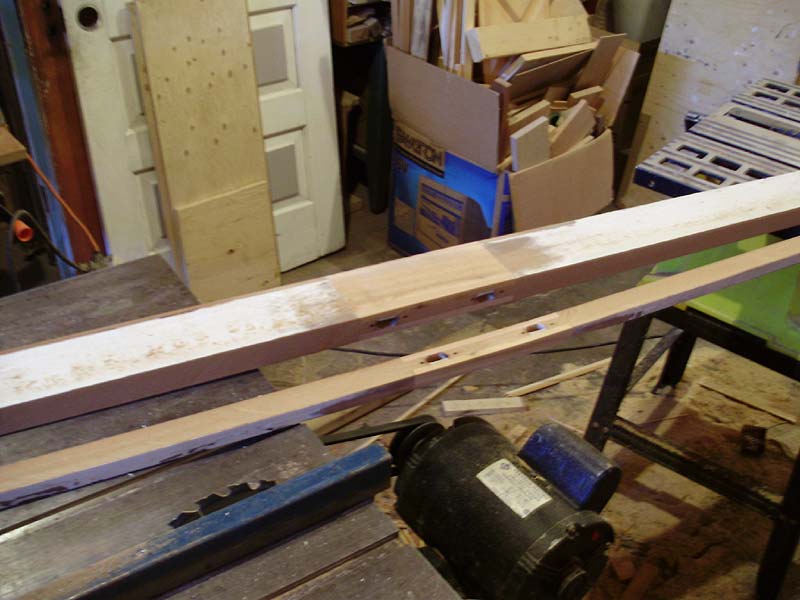 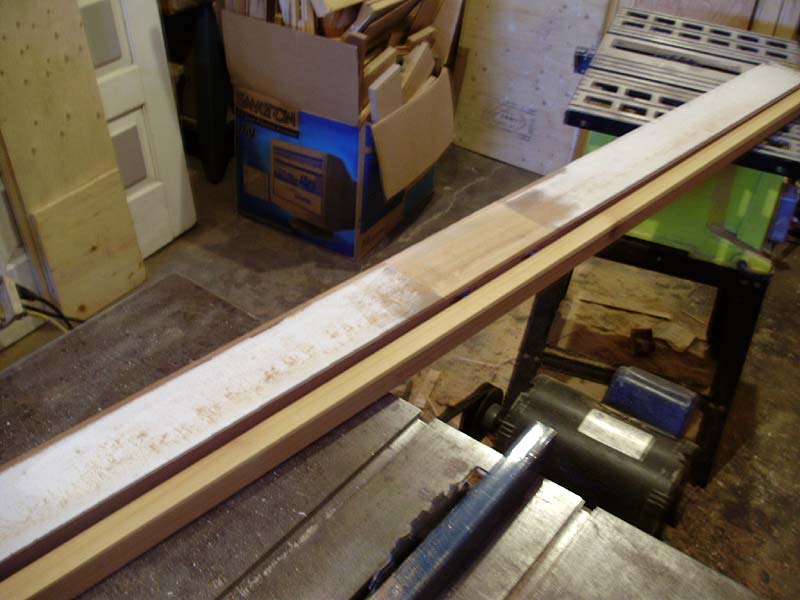 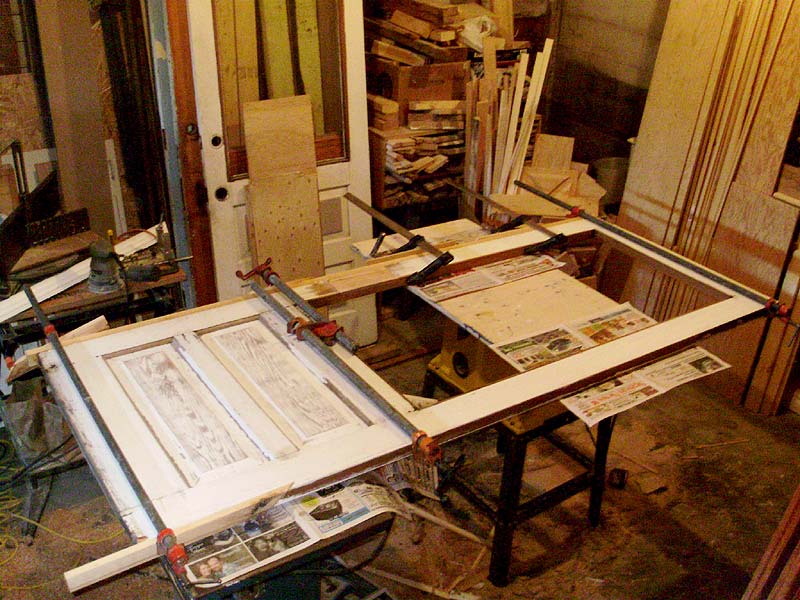 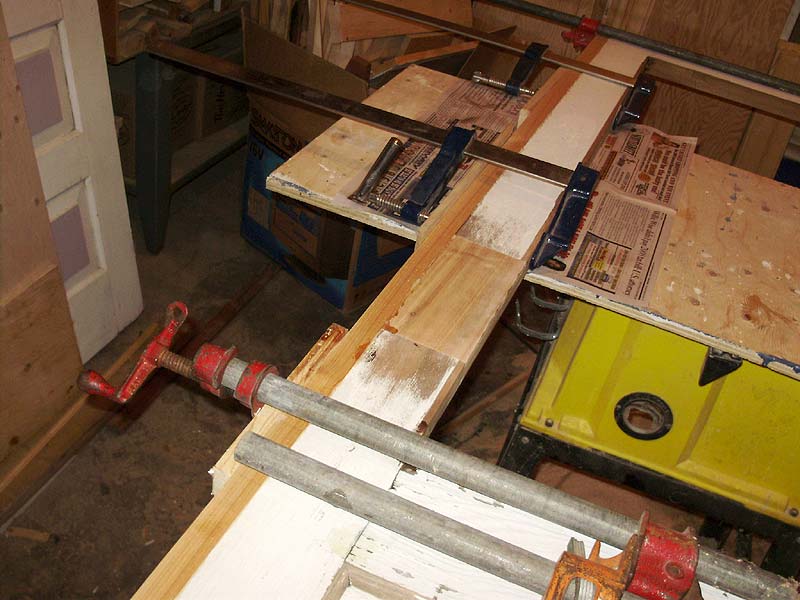 Clamps removed and the door has been surface sanded on this side (using a belt sander). 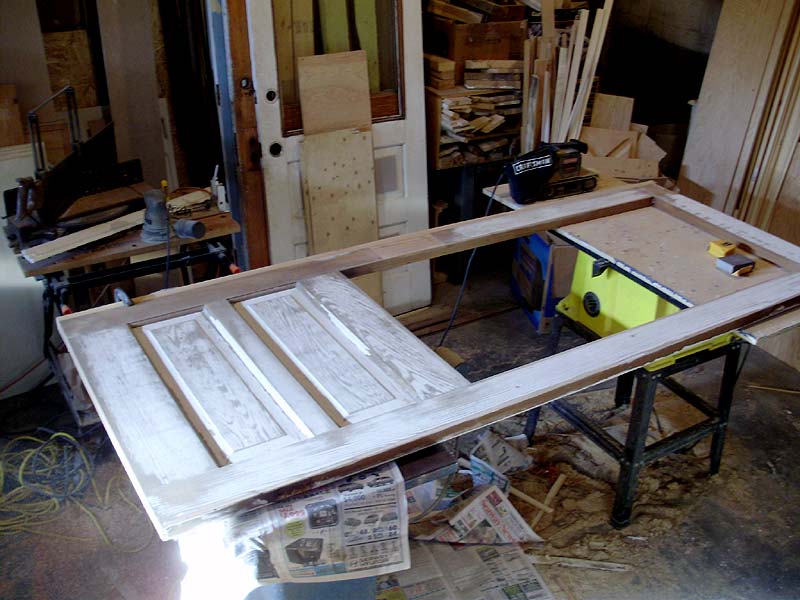 It's FAR from perfect, but it should look alright once it's painted. I'll be using latex silicone along the panel edges and corners. 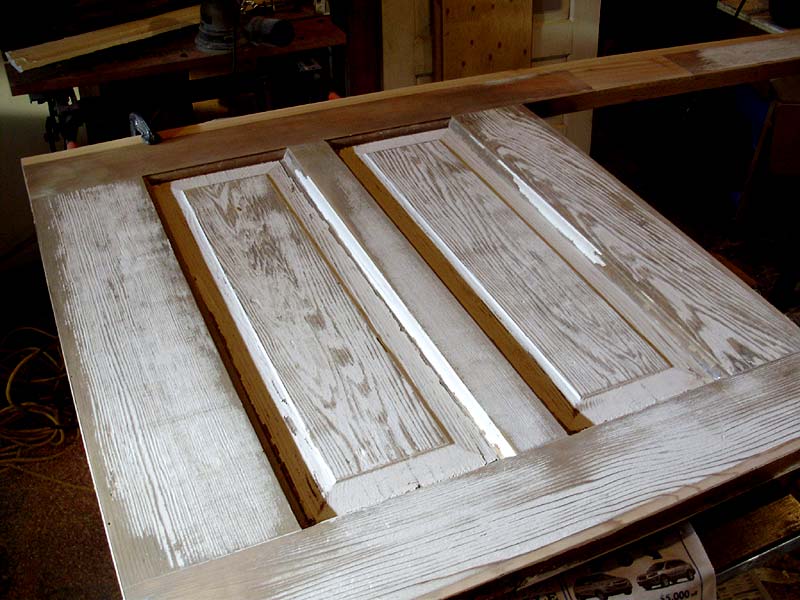 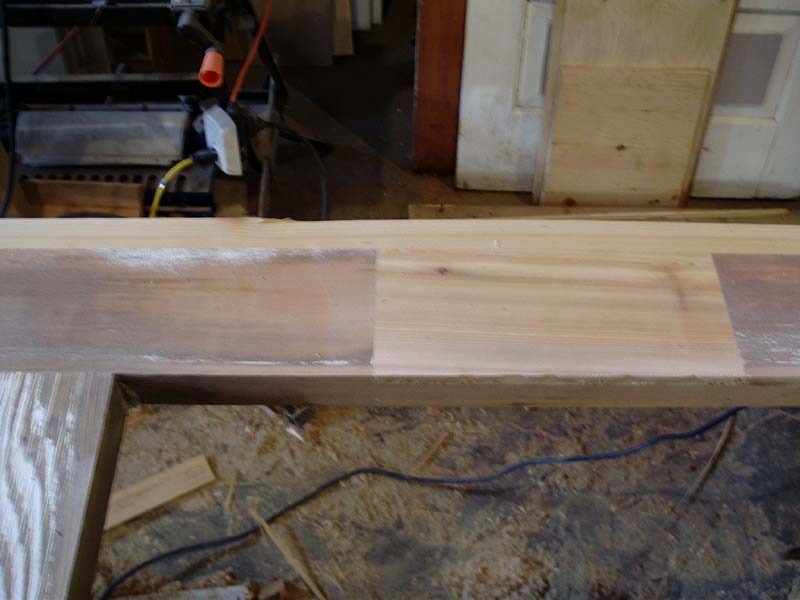 I squared the bottom edge (which wasn't too bad), but the top will need a lot trimmed off. Nearly 3/4". The door had previously been trimmed, but it should still fit my opening, even with this much trimmed off. 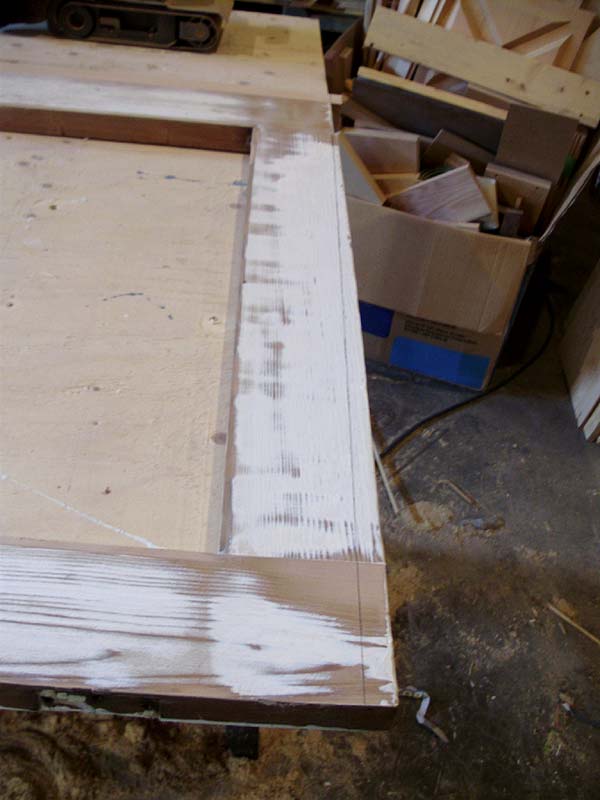